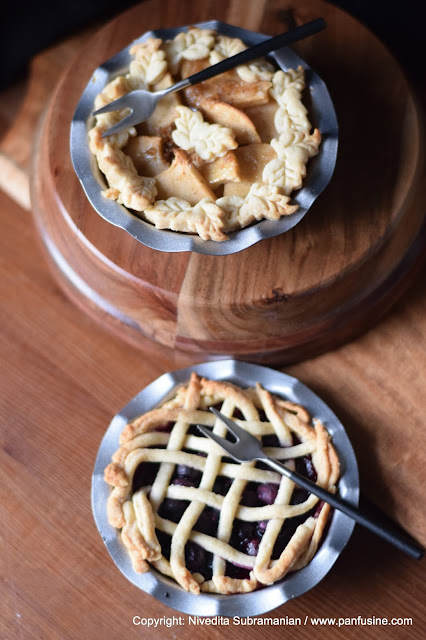 There's a new Thanksgiving tradition that's taken root at home for the past five years that I've been blogging. A new dish added to the repertoire, its not one of those things you put together at the spur of the moment, -- Thanksgiving is way too special for quick hacks even if its just the immediate family at the supper table. No, its always a recipe with seasonal ingredients with a unique 'Panfusine' twist infused.

This year,  I may have very well tossed  the quote 'As American as Apple pie' out the window. All along I've always referred to some standard measurement of what apple pie should be, what spices should traditionally be added, etc.  Those time honored notions went south this time around, and I mean it in a literal and figurative sense.

I'm not really a fan of cinnamon and vanilla the way its unilaterally used in practically almost any dessert found in Western cooking, in tiramisu and cinnamon buns yes, in apple pies, I just about tolerate it.
The large pie plate stayed in storage this year. I had just treated myself to these small personal tart / quiche pans (Cuisinart, I picked these up for a song at my local Home Goods store) and they came in handy since I could go ahead and make different pies according to the family's preference. The kid wanted blueberry pie, and he got his wish.

There are two mystery ingredients in this apple pie. The first, a South Indian equivalent of Chai Masala (In the southern Indian states, coffee is the caffeine fix of choice) - its called 'chukku kaapi podi - Chukku is the Tamil term for dried ginger and as the name implies, dried ginger is the primary ingredient. the blend also contains coriander, cumin, long pepper (thippili), galangal and so on . (store bought blends lave a laundry list of ingredients, but these five spices are basic and essential. Note - No Cinnamon! 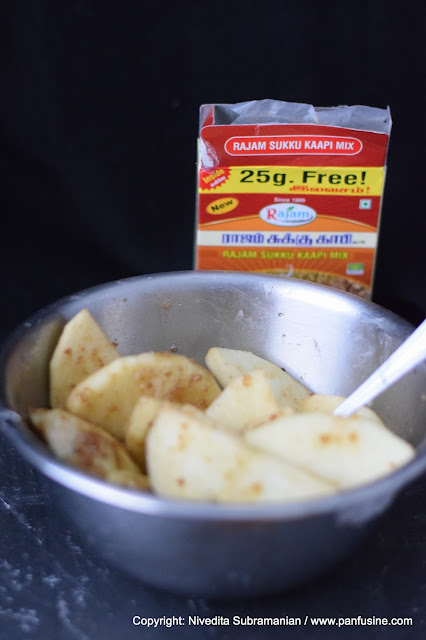 Instead of the traditional brown sugar I used a mix of Toddy palm Jaggery  dissolved into a thick molasses like consistency and its sugar crystal equivalent (panam sakkarai as its known in Tamil). It may be available rarely in Indian stores in the US (Kalustyans probably carries it under the name 'Khajurer Gud'), but for those lucky enough to reside in Chennai, I'm pretty sure you'll have many many outlets that still sell these wonderful local artisanal sweeteners. 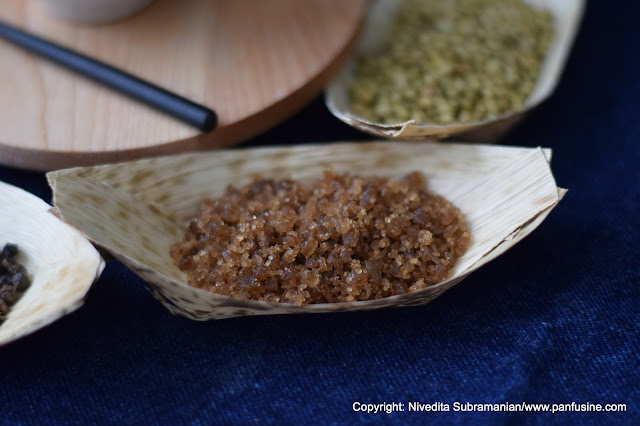 The recipe for the pie crust is tweaked from Kristen Miglore's Genius recipes . I used one whole stick of butter instead of a combination of butter and shortening. The 'genius aspect in this recipe is using Vodka along with chilled water to form the dough. (No worries, the alcohol completley evaporates off during the baking process, leaving behind an absolutely flaky crust)

Combine the vodka and water in a small bowl and set aside. (adding ice cubes to the liquid will ensure that its kept chilled)
Combine the sugar, salt and one cup of the APR in a food processor and pulse to mix well. Add the butter in installments, keeping the food processor running. Stop to scrape down the flour butter mixture intermittently. Once the mixture resembles that of coarse sand, tip the contents of the food processor into a mixing bowl. Using your finger tips or a silicone spatula, knead the mixture while adding the vodka/water teaspoon by teaspoon. Bring the mixture together into a ball of dough that is slightly sticky. Wrap in plastic wrap and allow to chill in the refrigerator for an hour.

To make the ginger extract, grate a 2 inch piece of fresh ginger root and squeeze out the liquid. 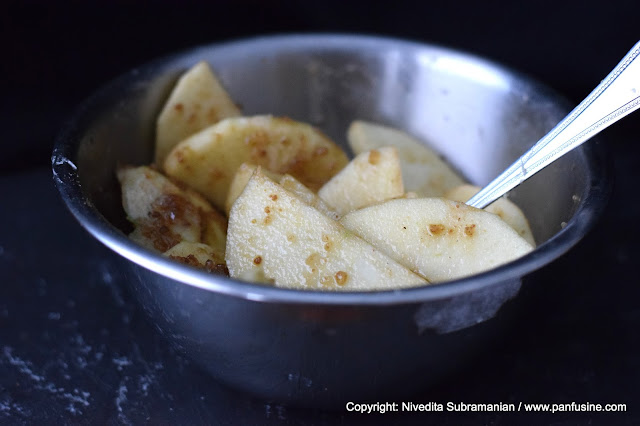 Combine the apple slices with the remaining ingredients, and allow to rest for about 30 minutes. The palm sugar crystals will not dissolve completely and that is quite OK.
Preheat the oven to 425 F. Divide the pie dough into 4 and roll out each portion to 1/8 inch thickness. Carefully place over the pie pan and press down. Use a fork to perforate the dough and bake for about 20 minutes, rotating the pie tins halfway through until the crust is golden.
Fill the crust with the apples. Roll out the left over dough and cut out shapes with cookie cutters, arrange them over the top of the filling. 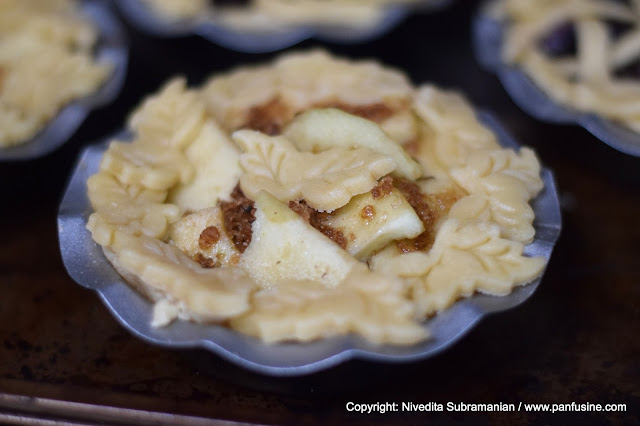 Alternatively, you could use a fettucine roller like I did to cut out even strips of dough and make a lattice topping (as seen on the blueberry pie fillings) 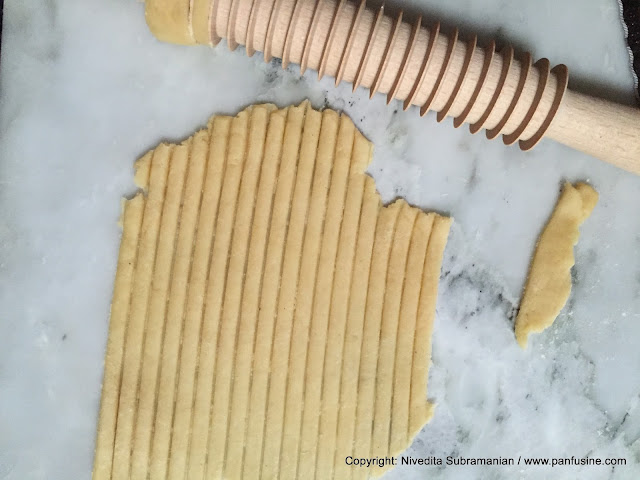 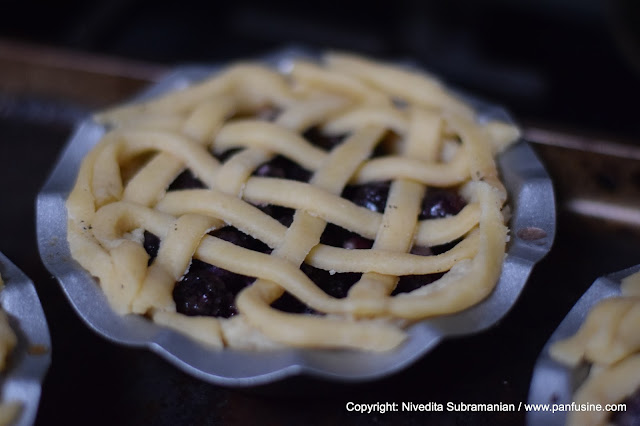 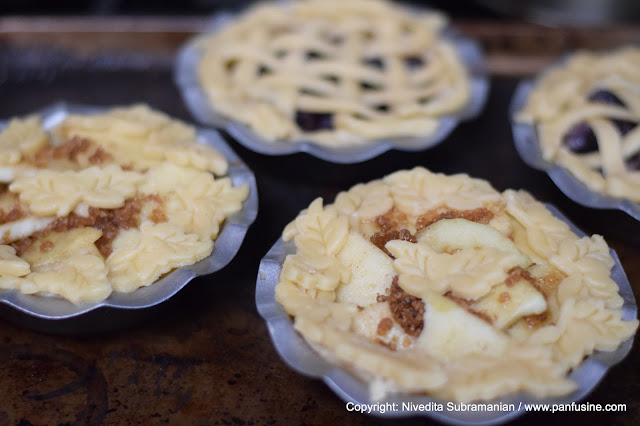 Bake at 425 F until the pie filling is bubbly and the dough covering over the pies have turned a golden brown. 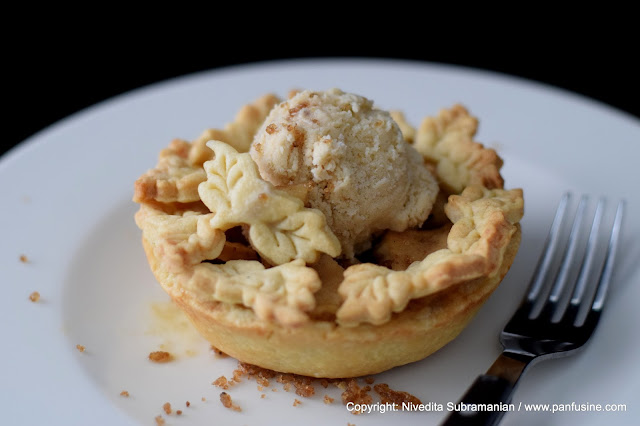 I served this up with a dollop of Lehiyam Gelato from my earlier blog posts from November, but it works perfectly well with a scoop of classic vanilla ice cream.