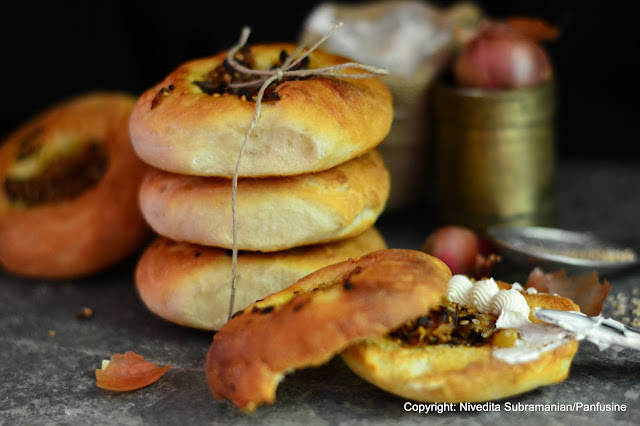 One of the things I love about the 'We Knead to Bake' Project is that Aparna Balasubramanian , the brains behind this endeavor, lets the group have a free hand in experimenting with variations on the monthly theme (either that or, she's given up on me!). This month's bread is a New York Classic, the Bialy.

For those who're wondering what in the world this is.. Its simply a roll with poppy seeds & caramelized onions in the center, the kinds that invariably leaves you with a strong onion breath. Yes, the kind of breakfast one normally avoids before stepping out for an important meeting or interview! But be aware, one bite into the chewy warm bread will leave you addicted for life. For  about 3 years in graduate school, A Bialy with cream cheese and a cup of coffee from a vending cart on 1st Avenue in New York City was my staple breakfast. It remains a nostalgic comfort food to this day. 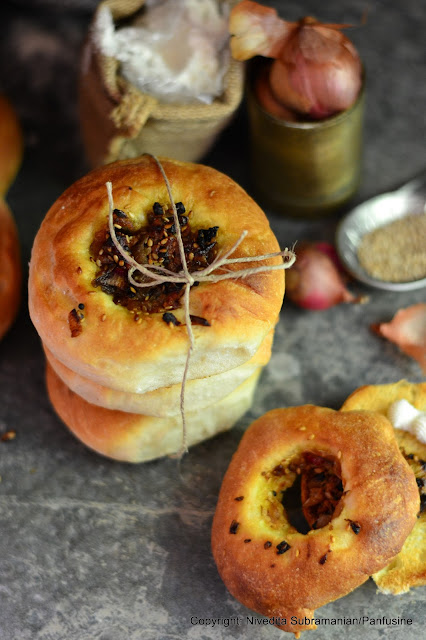 The name Bialy comes from Bialystocker Kuchen which translates as “bread from Bialystok” which is in Poland. According to Mimi Sheraton,  the author of the the book 'The Bialy Eaters', Bialys are rarely seen or made in Bialystock these days, an unfortunate consequence of World War II, when most of the Jewish Bakers that had honed Bialy making to an art were killed during the Holocaust.

In the early 1900s, many Eastern Europeans, including the Polish, immigrated to the US and settled down in New York. Naturally, they also brought their Bialy making skills with them and that is how the New York Bialy became famous.

Inspired by a line by the Chinese poet-statesman Lin Yutang from Mimi Sheraton's book " What is patriotism but the longing for the foods of one's homeland?''  (and here, I shamelessly justify my rather delicious fusion Bialy recipe), I decided to pair the mandatory toasted onions with a traditional South Indian Tamarind relish, the 'Pulikaachal'. 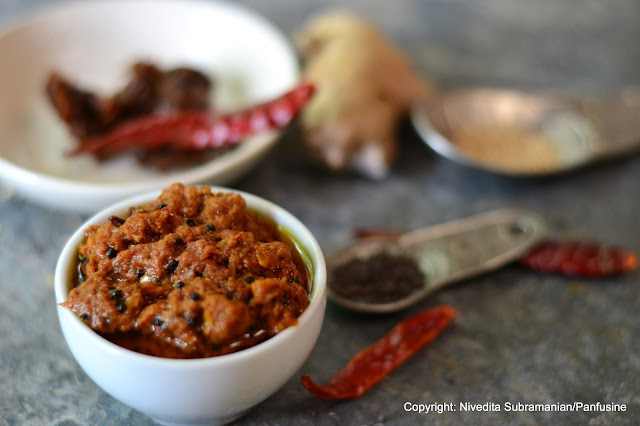 This spicy & tangy relish is the flavoring behind the iconic Tamarind rice and many a South Indian emigre to the US of A and all over the world are guilty of smearing their toast with a dab of this umami laden relish. (I'll post the recipe for the relish in an upcoming post,  but its readily available in most Indian grocery stores).

Combine the yeast, sugar, salt and flour in a kitchen Aid Stand mixer. Using the balloon whisk runa t the lowest setting for about a minute to mix. Replace with the dough hook and then add the warm water in a steady stream. Knead until the dough comes together as a mass and then let the dough rest for 10 minutes. This will help the dough absorb water. Knead again, adding a little more water or flour (not too much) if you need it, until your dough is smooth and elastic but not sticky.
Shape it into a ball and put it in a well-oiled bowl, turning the dough till it is well coated with the oil. Cover and let it rise till about double. This should take about 2 hours. If you’re not making the Bialys right away, you can refrigerate the dough overnight at this point. When ready to make them, keep the dough at room temperature for about half an hour and then proceed with the rest of the recipe.

While the dough is proofing, heat the tablespoon of oil in a skillet and add the sesame seeds once they barely begin to 'hop' around in the hot oil, add the shallots and saute until they are translucent. Cool and combine with the tamarind relish as per your taste preference. The shallots will brown further to perfection when baking. 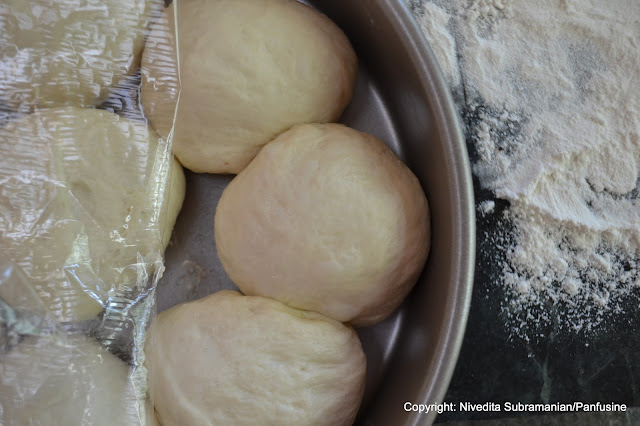 Sprinkle your work surface lightly with flour and place the dough on it. Divide it into 8 - 10 equal pieces and shape each one into a roll by flattening it and then pinching the ends together to form a smooth ball.  Place the rolls on a lightly greased baking sheet and cover them with a towel. Let them rise for about one hour (about  1 1/2 to 2 hours for refrigerated dough)  till pressing with a finger on the top leaves a dent.

Work on one piece at a time, while you keep the others covered so they don’t dry out. When the rolls are ready, pick them up one at a time and using your fingers, form the depression in the middle. Hold the roll like a steering wheel with your thumbs in the middle and your fingers around the edges. Pinch the dough between your thumb and fingers, rotating as you go and gradually making the depression wider without actually poking a hole through.

Remember not to press on the edges, or they will flatten out. Once shaped, you should have a depression about 3” in diameter with 1” of puffy dough around the edge, so your Bialy should be about 4” in diameter. Prick the center of the Bialy with a fork so the center doesn't rise when baking.


Place the shaped dough on a parchment lined (or greased) baking tray leaving about 2 inches space between them. Place the caramelized onion filling in the depressions of each Bialy. Brush the outer dough circle with milk. 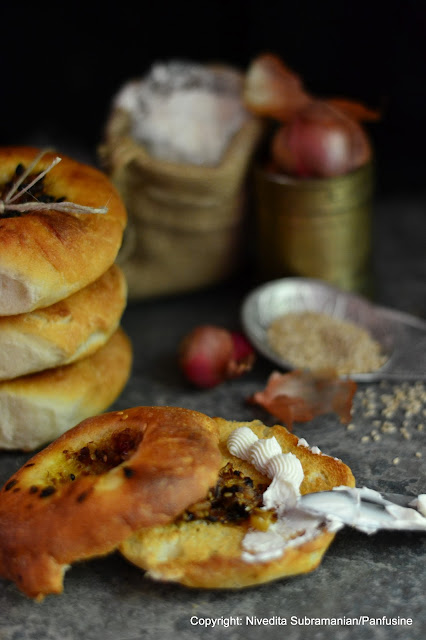 finely slice a cleaned leek (just the white and light green parts) and sautee until translucent in one tablespoon of olive oil. Add 2 tablespoons of Za'atar to the leeks and season with your preferred amount of salt. Allow to cool and fill the Bialy's as per the recipe.

Bon Appetit!. & yes, this recipe is being Yeastspotted