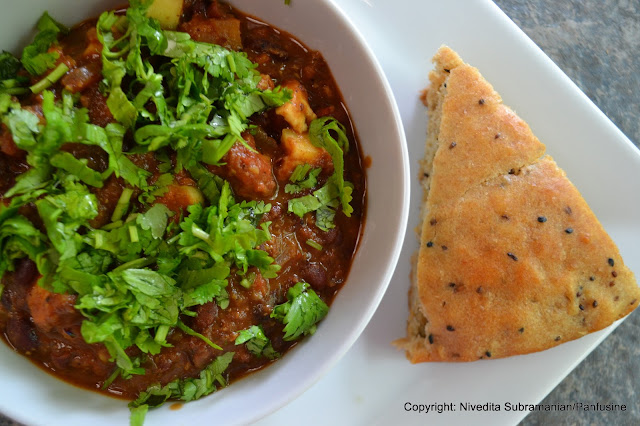 If there is ONE Indian bread I'm terrible at making its the Naan. Been working at it for years now, but invariably I'm left with a concoction that either looks like a dough sculpture of an Amoeba , crossed with a texture resembling a piece of Kevlar (umm... not that I've actually sunk my teeth into one!..).

It was time to look for a suitable alternative and be content to savor naan from the occasional restaurant visits. For starters, I gave up trying to make it into a naan. Instead set my sights upon a chunky satisfying Foccaccia like  bread that I could cut into generous wedges and serve up with a hearty bowl of Indian style red beans known as Rajma (for the recipe, just click the link!)

The flavor for the bread comes from Fennel, Nigella and bishops weed (commonly known as Ajwain in Hindi), tempered in sizzling hot oil and added to the flour. the chewiness of the bread is accentuated by the use of Bread flour.

Sift together the flours, yeast and salt, ensuring that the yeast & salt are well incorporated. Mix together the kefir and water. 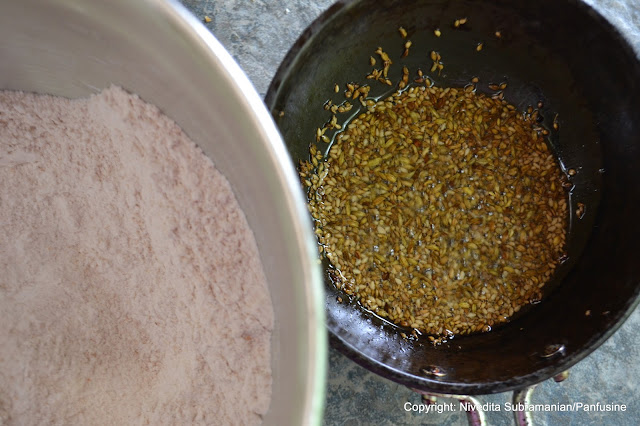 Heat the 2 tablespoons of oil until almost smoking and add the spices. Once they begin to sputter and emit their characteristic aroma, remove from heat and allow to cool slightly before adding into the flour (you do not want to add the scalding hot spice blend into the flour directly , just in case  it scorches up the yeast!) 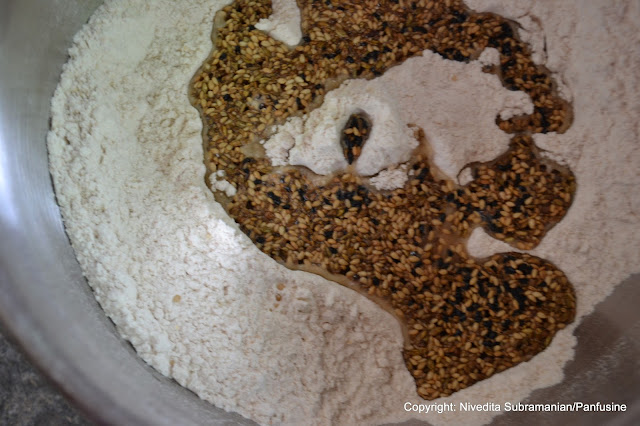 Add 2 cups of the diluted into the flour and mix well with a wooden spoon to ensure that all the flour is soaking in the liquid (if the mixture still 'blows' out flour and comes together as a ball, add a bit more of the liquid).

Drizzle some of the oil over the mixture, cover with a cling wrap and place in a cold oven with the light on. In the meantime liberally brush the bottom and the sides of two circular  9 inch baking tins with oil.

Allow to rest and rise for about 2 hours until the volume doubles and the dough can easily be pinched off the surface revealing an abundance of air bubbles.

Punch down the dough (which will be quite sticky & viscous) and divide the dough into the two tins. divide the remaining oil evenly between the two tins and using your finger tips press down on the dough to cover the bottom of the pan. Brush liberally on the top with milk and bake in the oven for about 20 minutes, turning the tins half way through the process. Check to see the 'doneness' by tapping on the bread. if it sounds hollow, then remove the tins to cool over a wire rack. Cut into wedges and serve warm with your favorite stew or even Pav Bhaji. 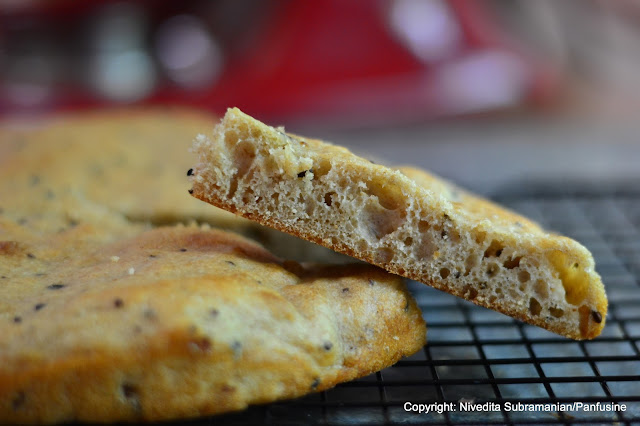