Raindrops of Roses.. and a bowl of Harissa spiced Ratatouille! 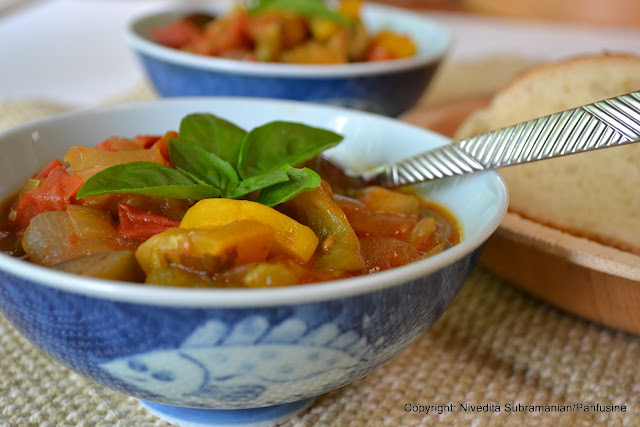 After a perfect meal with a choice of your favorite dishes, have you ever felt so satisfied that you could (almost) give away your wealth & precious possessions? I think this could fall under that oft shared slide of wisdom from the social networking sites.. "Never speak when you are angry, never promise when you're happy, never decide when you're sad." and food definitely falls plumb into the second category. There is something so lulling about certain dishes that are categorized under the umbrella term 'Comfort food' and its usually the stuff that one grew up with.


And then... there comes a point in time when the geographical origins of the food slowly begin to fade away, much like a soft sidewalk chalk drawn line getting erased by footsteps, early morning dew and the occasional downpour. It is indeed a wonderful state of being when certain foods begin to tickle your tastebuds, (my metaphorical, Victorian way of describing a 'pavlovian response'), and even as you lovingly tuck into these, you forget, and do not care at all, about where the dish came from.. Now if only people could adopt that attitude for their fellow human beings, irrespective of their caste, creed, gender & orientation... (but then politicians would be out of business then, wouldn't they?)

Here are a couple of my favorite comfort foods, from my native Tam-Bram community &  beyond!


Lemon rice: a 'quick to make' flavored rice where the seasoning is added after cooking the rice and coats the grain rather soak into it as with creamier flavored rice dishes. Although its traditionally made with Lime Juice (Yea, yea.. there is a bit of a nomenclature confusion  between what citrus fruits are called. Lemon is the term used in India to describe what the Americans refer to as Lime, The term Lime is used to describe a citron like fruit in turn.). I made this using the more uncommon Mayer lemons which confers a delicious mild orange like tang to the dish.


Chickpea Sundal: A comfort food that is instantly identified with Marina Beach in Chennai. This is an uber healthy light dish to nosh on, Steamed Green garbanzo, seasoned with a tempering of Mustard, curry leaves and the obligatory arbol chile. Finely chopped green raw mangoes and a sprinkling of fresh coconut confer an incomparable addictive 'Je ne sais quoi' factor.


Rajma: Its  hard to comprehend that red kidney beans were not really native to Indian Cuisine. One of the flagship dishes of Punjabi cuisine, a warm bowl of this dish with fragrant Basmati rice can really make you feel like all is well with the world. When that feeling fades the next morning, simply reheat the leftovers and eat. This dish tastes better the next day!

Which brings me to this weeks recipe.. I have to admit, I've taken it easy this summer,  taking time off to smell the more familiar comfort foods without incessantly trying to 'Panfusine' them. The summer bounty of fresh picked vegetables from the backyard & the neighboring farm... Perfect for a comforting bowl of Ratatouille, & not the Thomas Keller Confit Byaldi variety. (& yes, I've done that with the traditional Avial, it was one of my earliest Panfusine dishes)

Touiller in French is 'to toss' and it never ceases to amaze me how a simple mix of vegetable could yield such flavor! SO here it is, Ratatouille flavored with Harissa (well, I couldn't possibly ignore my wandering imagination completely now, could I?? All the vegetables used in the dish were either grown at home (the eggplant.. & yes this very same specimen was cooked up!)


or from my local Hillsboro Farm in New Jersey..


What are your personal comfort foods?

Heat 2 tablespoons of the Olive oil In a heavy bottomed Cast Iron pan and add the eggplant. Saute until the vegetable is soft and begins to stick to the bottom of the pan. Remove from pan and set aside.

Add the remaining oil and saute the garlic. once it gets soft, add the onions and saute until they turn translucent.

Add the Peppers along with the Rosemary & Harissa, saute for about 5 minutes and then add the golden zucchini, the partially cooked eggplants and the tomatoes.  Season with salt, cover and cook on a medium-low heat until the vegetables are soft (about 15 minutes). Remove the rosemary sprigs before serving.
Transfer to a serving dish and serve with Pasta or just plain fresh crusty French bread. 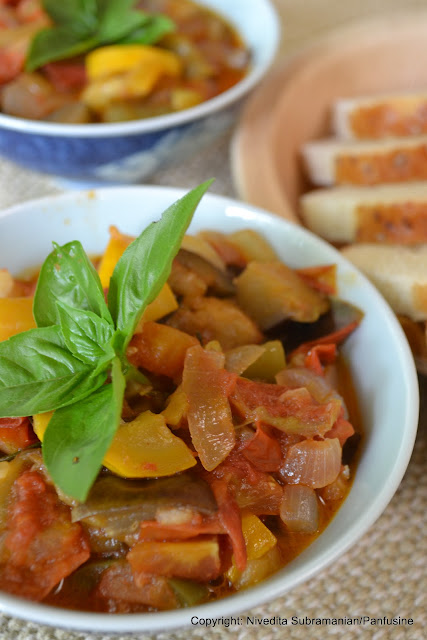