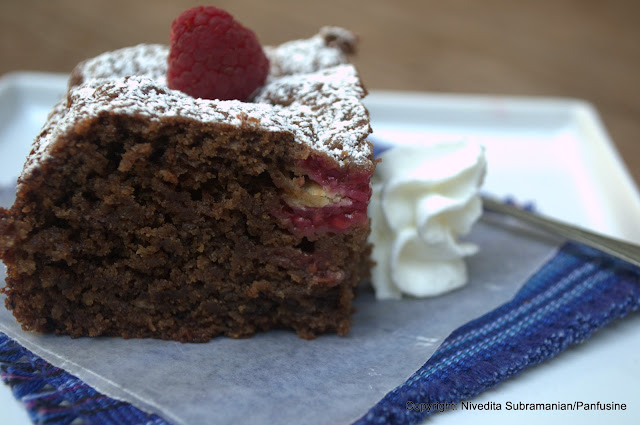 You know you're passionate about something like blogging when missing out on one post for  a week sends you into a spiral of guilt & blanked out grey matter. The confusion, nagging feeling of  the high that invariably kicks in once you click on the orange 'Publish' button.


This weeks recipe had been narrowly missing the light of 'publishing' days for some time now. First it was a complete clean-out of my pantry trying to locate my stash of Toddy Palm Jaggery that I had painstakingly carted from a remote one-street village in the interiors of Tirunelveli, a district in Tamil Nadu state in South India. 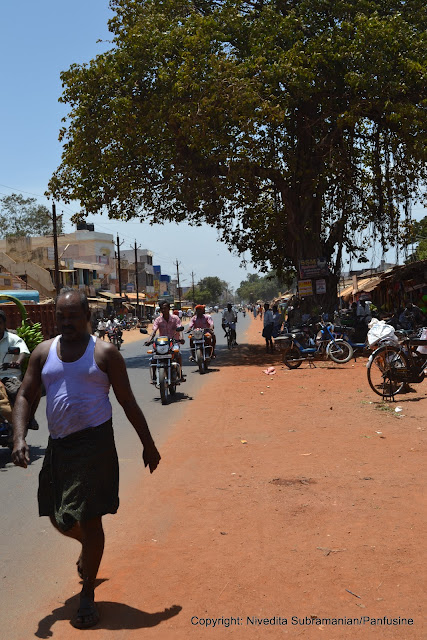 (It turned out that I had wisely stored it in the freezer).

I had used this aromatic flavorful rustic sweetener in a  posset last year and would still be making regular batches of the creamy custard and scarfing it down, if it were not for the tiny detail that the entire thing is made up of heavy cream

Karupatti is made by boiling the sap of the Palmyra Palm, commonly known as Toddy Palm, because the sap is fermented to make a heady alcoholic country liquor referred to as 'arrack' or toddy. The concentrated sap is then poured into split coconut shells that accounts for their characteristic concave cup shape. 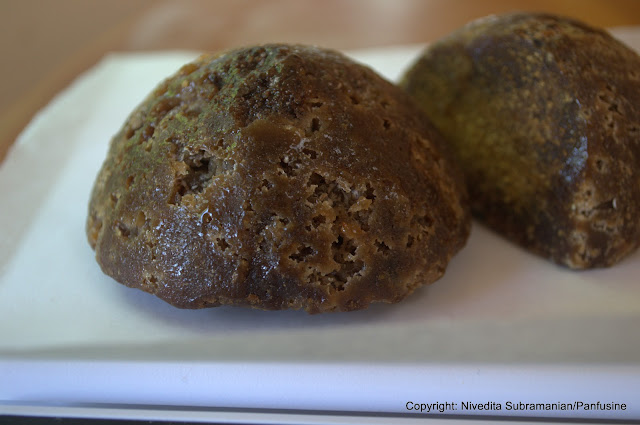 Refined sugar being more expensive than local sweeteners, Karupatti was often added to coffee served to servants. It invariably was a better tasting coffee and I remember many a time I'd ask to trade my own cup of thick sugary filter 'Kaapi' (coffee) for the lighter, more  aromatic and flavorful brew made for the household help.

It was this flavor that inspired me to create this weeks recipe, the Karupatti 'Kaapi Brownies. I had an additional taster, my husband's nephew from India, Avinash, who even approved of the batter. Since there are no eggs involved, its perfectly safe to lick the mixing bowl clean!

My first preference for pairing would be a gooey caramel sauce, but in a pinch, a squirt of store-bought whipped cream from a can worked beautifully.

Brush a 9 inch square baking pan with melted butter and line with parchment paper. Preheat the oven to 350 F.

Combine the powdered flax meal and the boiling water. Whisk together until combined and mucilaginous. Set aside.

Combine the Karupatti and 2 oz of water and heat in a microwave for one minute until the karupatti dissolves. Strain (& do NOT skip this step) using a tea strainer to get rid of sandy grit (which it invariably contains). Of course, ignore if  you're using molasses out of a bottle. 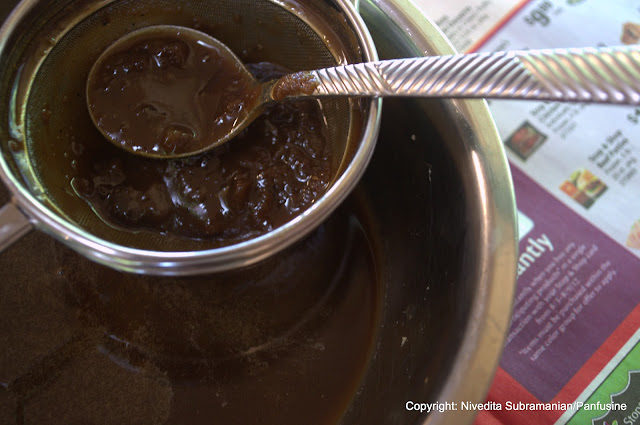 Dissolve the instant coffee granules in this mixture and set aside.

Sift the all purpose flour, baking powder, dried ginger powder and cocoa into a large mixing bowl. Add the finely chopped crystallized ginger to the mix. Wash and dry the raspberries, and add to the mixture to coat. 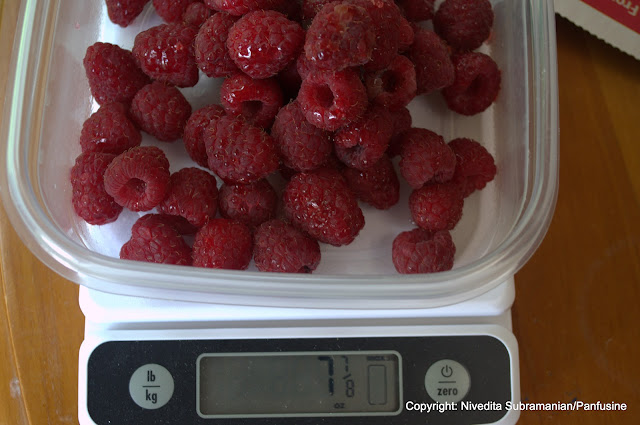 Combine the butter and sugar in a second mixing bowl and cream together until fluffy. Gradually add the karupatti mix / molasses, followed by the heavy cream and the coffee extract. 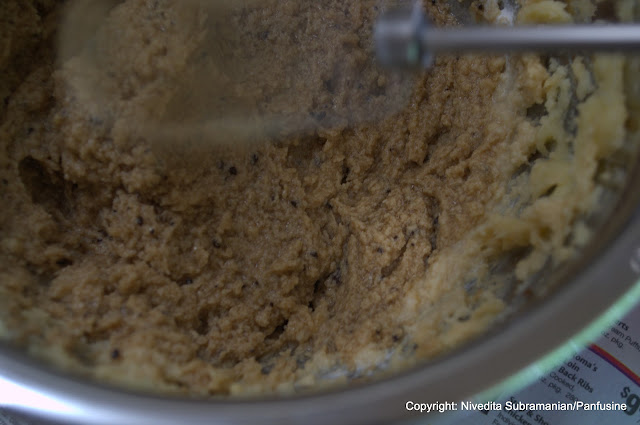 Gradually add in the dry ingredients into the wet mix and fold until combined.
Pour out the batter into the prepared baking sheet and  smooth the top surface with an offset spatula. 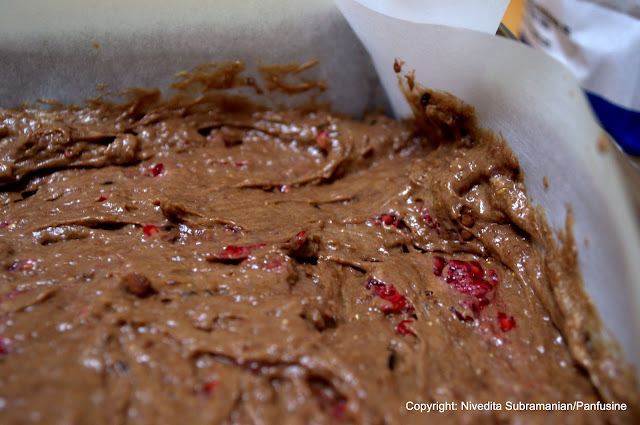 Bake in the oven for about 35 - 40 minutes, or until a skewer inserted into the brownie comes out clean. 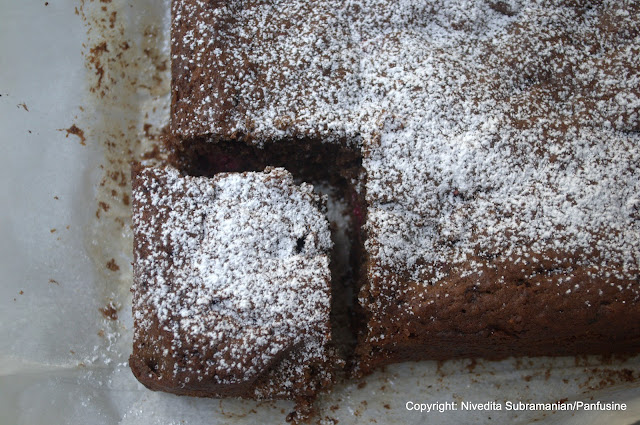 Remove from oven onto a cooling rack. Once its cooled down, dust with powdered sugar and cut into squares to serve. 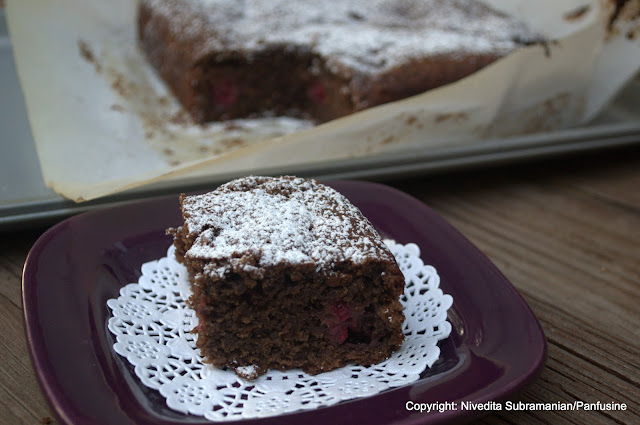 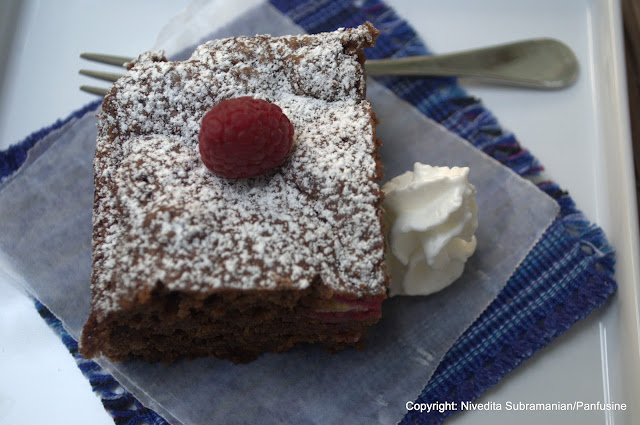