This Diwali, Leave the G**, Take the Cannoli, the Therattipaal Cannoli 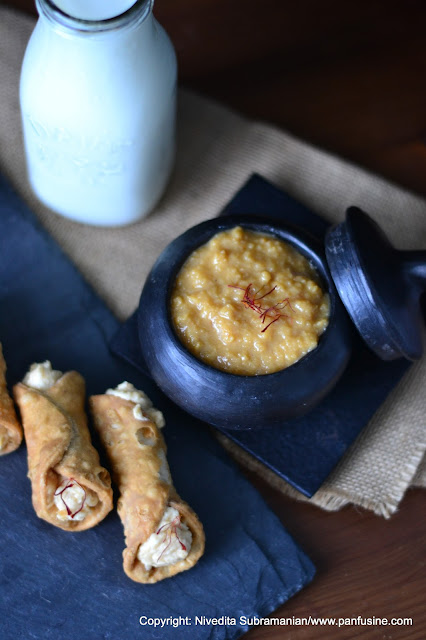 When you read through Rachel Laudan's book 'Cuisine and Empire' :Cooking in World History, one of the things (or lack thereof) that strikes you, -- especially hard if you are a South Indian -- is that despite being the Ground Zero for spices, South Indian cuisine simply does not get mentioned as a world cuisine. The culinary narrative stops geographically at Goa before sailing off towards the Phillipines and on to South America as part of the Catholic trade route.

And with this historical trade route, one particular dish traveled halfway across the world and became entrenched as a signature dish from Latin America - Its Spanish moniker is Dulce de Leche, but its original ancestral version is still revered as a signature dish amongst the South Indian communities. Its none other than the iconic 'Theratti Paal'.

Its a classic 2 ingredient dessert. All you need is good quality whole milk and some sugar. And plenty of time and a consistent low heat source to cook it.

It took me close to 4 years to actually get this dish plated and devoured. I bought the cannoli pipes (used to make traditional Cannoli shells) way back in 2011. It wasn't until last year that I mustered up the courage to try and make the dessert. Learned 2 important points. 1. It isn't as easy as simply stuffing the therattipaal directly into the cannoli shells. Authentic Cannoli filling has a light whipped texture. 2. Store bought cannoli shells simply do not work. they contain eggs and Vanilla, and these flavors do not harmonize well with the caramelized flavor that is the signature of the South Indian classic.

You need: (For the Therattipaal)


Heat the milk in a heavy pan, making sure you keep stirring until it reaches a boil. Lower the heat to just above a simmer level and allow the milk to evaporate to about 1 /5 of its original volume. Keep peeling off the creamy skin that forms over the surface and stir it back into the liquid. Once it has reduced to a fifth of the original volume, stir in the sugar. Increase the heat slightly, keep stirring until all the moisture evaporates, leaving behind a thick caramelized blob of flaky sweetened milk solids. 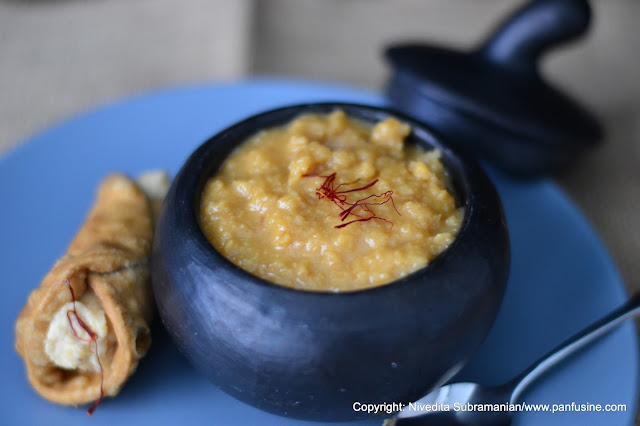 Store in a refrigerator.

Combine all the ingredients together and knead into a soft pliable dough. Pinch off marble sized bits of dough and roll into a thin (and I mean really thin) circle. Using a fork, stab holes evenly on the surface. Cut out a circle using a 3 inch circular cookie cutter. Moisten a small arc at the edge of the disk, where the two opposite sides of the dough will be sealed. Wrap the disk around the cannoli tube and seal the edges as shown. 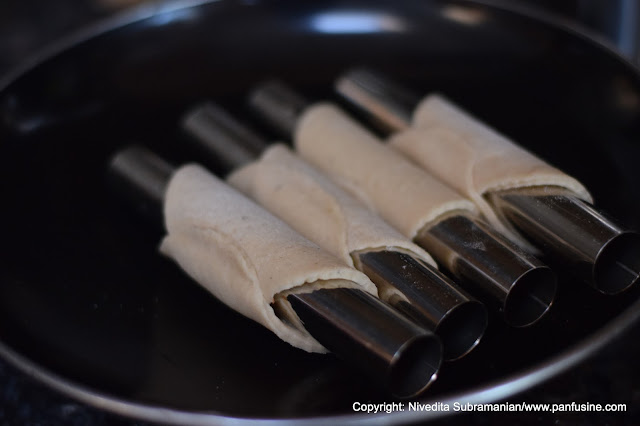 Fry the dough (along with the cannoli tubes) until they  turn golden brown. Carefully remove the fried cannoli shells from the oil onto kitchen towels. Wait for the tubes to completely cool before sliding the shells off. 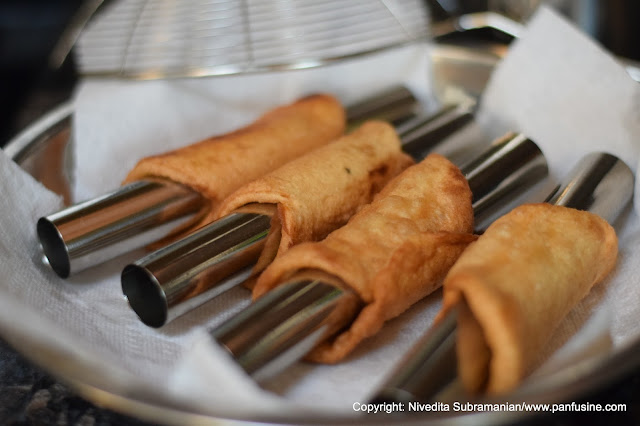 Store in an airtight tin until required. 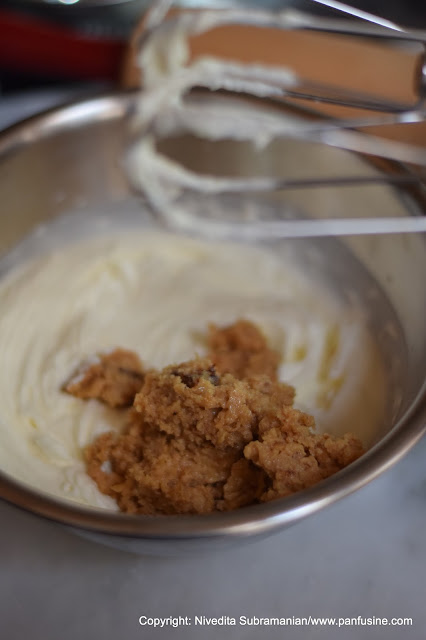 Add in the  Therattipaal in batches incorporating it into the whipped cream, Sample as you go to determine the level of sweetness and flavor as per your personal preference. 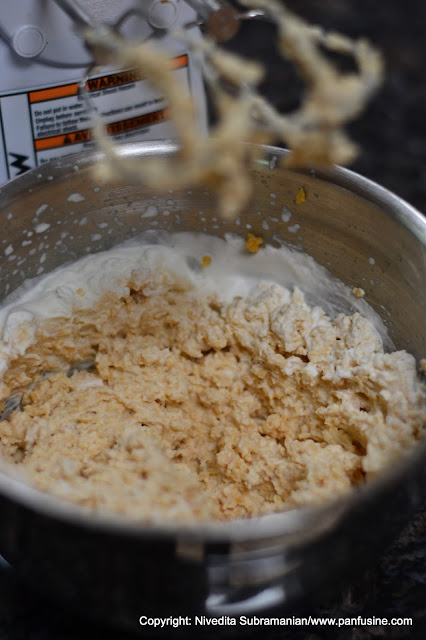 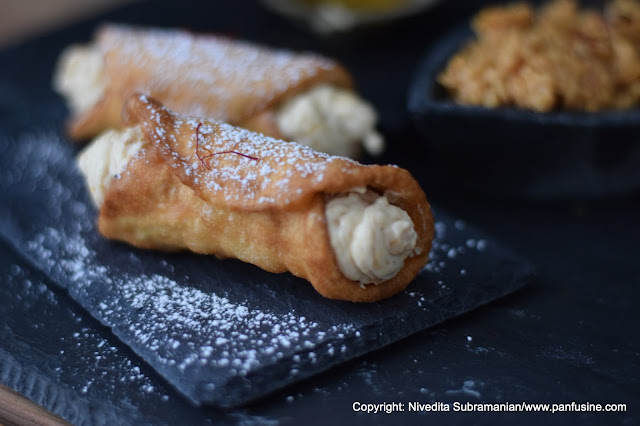 Dust with Icing sugar and serve with a cup of hot filter coffee. 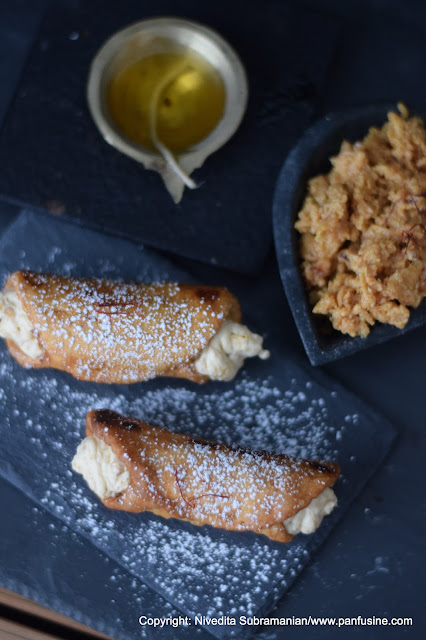 Wishing all my readers a happy Diwali and prosperous Year ahead.