Kumquats & the art of Produce Maintenance (and a divine Kumquat, ginger & thyme Focaccia) 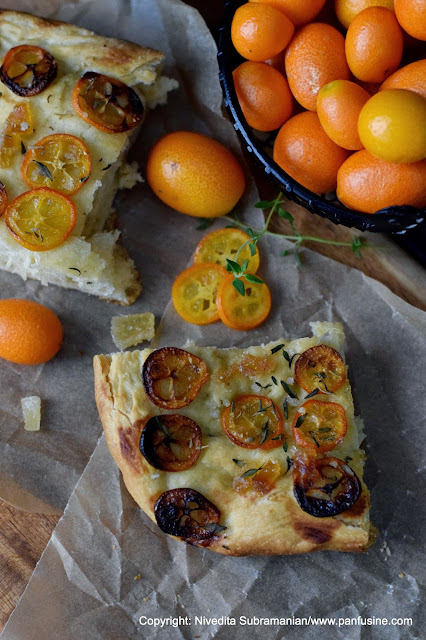 Kumquats definitely lucked out in the aesthetic beauty department when it comes to citrus fruits (although, Mayer lemons come in a close second). Tiny, golden,  olive sized, and a spectacular shade of vibrant orange that almost seems to radiate a glow from within. 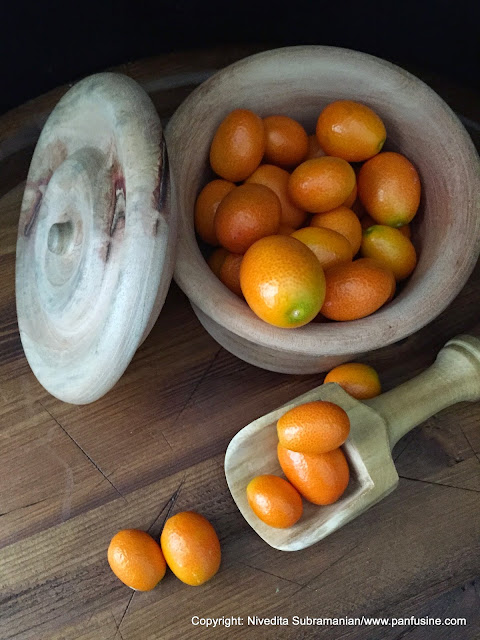 Its such a pity that the beauty can be so fleeting. Forget to stash them away in the fridge as soon as you return from grocery shopping (or even if you do stash the styrofoam tray that contains the fruits ),   they start getting moldy and before you know it you have flecks of wispy green spores puffing out of the entire batch as soon as you try to gingerly pick out the rotten ones. And to quote a new addition to Murphy's law, the rotten fruit will invariably be one of those in close contact with the maximum number of its fellow kumquats so as to inflict maximum spread of the mold. and then goes the entire lot, sacrificed at the garbage altar.

I was one of the lucky ones picked by OXO to test their new produce saver boxes and was sent 3 boxes of the roundest, cutest kumquats (and a bag of Kale sprouts ) from Melissa's produce. It took a lot of self control not to immediately use them in a recipe, but I resolutely transferred them into the greensaver containers and stashed it away in the refrigerator for 4 days, while I made up my mind about what I would make with them (there are other recipes coming up , with Kale sprouts in the next post). 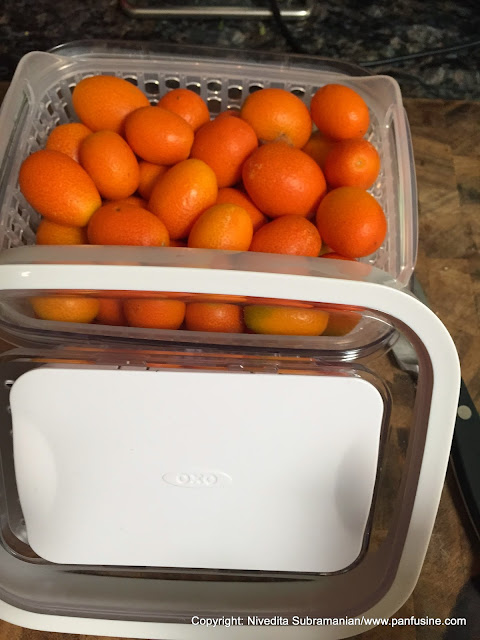 Four days later, when I opened up the box with the excitement of a kid opening up presents on Christmas Day, there they were as fresh as ever, to the point where I went digging through the entire lot looking for spoilage and couldn't even find a hint of it. The 'secret' it turns out is this carbon filter that absorbs the Ethylene gas naturally produced by the fruit. This is the main culprit behind ripening and consequent decay of the fruit. The lid houses the filter and can be 'set' to an open position which allows the gas to escape (as is recommended for fruits) or closed to ensure that greens and other vegetables that do not 'ripen' stay crisp and don't wilt.

The Kumquat recipe I created for Melissa's Produce and Oxo's green saver campaign is inspired by  a favorite recipe of mine from Food52 - a Focaccia topped with Mayer lemon & fresh rosemary. Its a fabulous combination if you don't mind the tartness of the lemons. The Kumquats were perfect since the sweet peels balance the tart flesh well. I discovered some time ago that Ginger and Kumquats are a match made  in heaven when I combined them for traditional South Indian relishes. Finely diced crystallized ginger makes for a heavenly bite with the spicy deliciousness that only ginger can deliver. The fresh thyme rounds off the flavors beautifully.

(inspired by and adapted from a recipe by Deensiebat on Food52.com)

You need (for the dough): 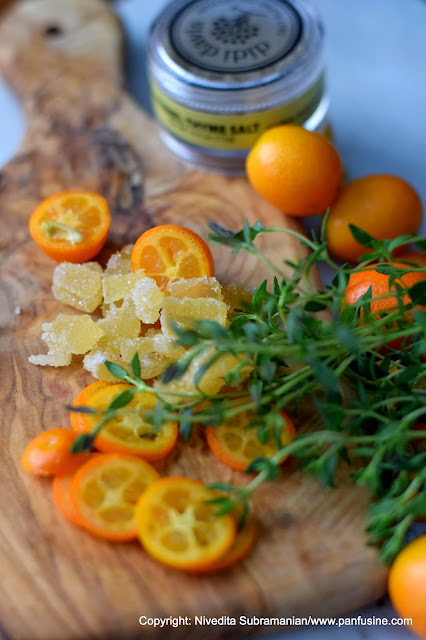 Dissolve the sugar into te warm water and whisk in the packet of yeast. Allow it to 'bloom' and develop a frothy appearance.

Measure out 3 cups of flour in a mixing bowl. sift in the salt, thyme leaves and the olive oil. 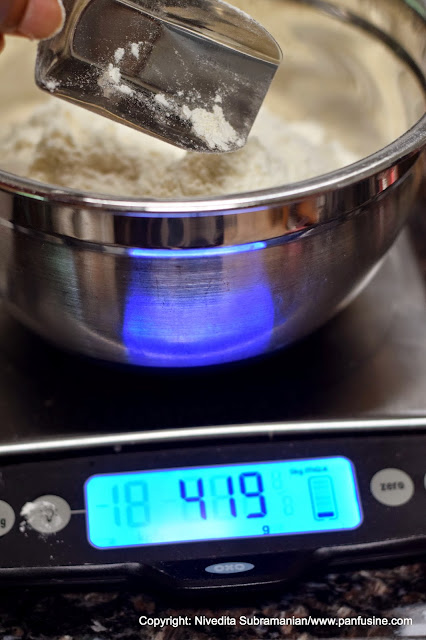 Pour in the yeast mixture and mix together with a wooden spoon until the liquid is dispersed uniformly. Cover and allow to proof in a warm area until the volume doubles up (~ 1 - 1.5 hours). In the meantime slice the kumquats  thinly with a sharp knife,  taking care to remove and discard any seeds (there will be plenty and they are disproportionately large compared to the size of the citrus). 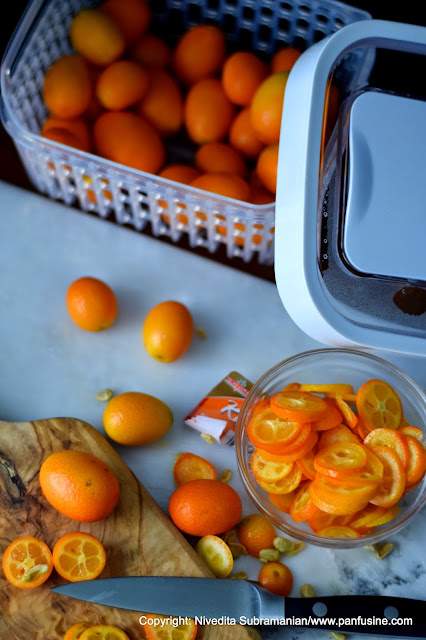 Once the dough has risen, transfer it out to a flat surface, punch down and roll it out it to a rectangle making a tri fold as if folding a letter. Repeat this process two more times and allow the dough to rise once more for about 30 minutes. You may choose to refrigerate the dough at this point and continue the following day. Just make sure to bring the dough up to room temperature.

Line a 9 x 13 baking pan with parchment paper. Transfer the dough onto the pan. Gently spread the dough evenly all the way to the edges of the pan. Drizzle a bit of EVOO and  make 'dimples' in the dough using your finger tips. Arrange the kumquat slices evenly on the surface of the dough and sprinkle the crystallized ginger bits and the fresh thyme evenly. Sprinkle the salt and drizzle a bit of EVOO over the entire surface. 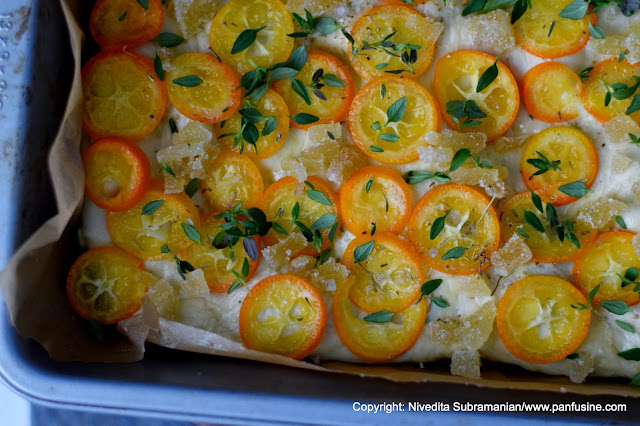 Cover and set the pan aside for about 15 - 30 minutes to give the dough one last rise. In the meantime heat the oven to 450 F. Place the pan into the oven and bake for about 30 - 40 minutes until the top begins to turn a golden brown. It may not be uniformly brown, In fact even look pale around the slices of kumquat, but the focaccia  is perfectly baked by this time. 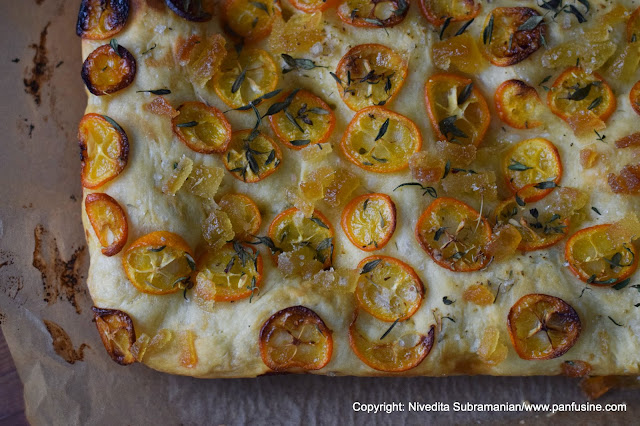 Allow to cool slightly before cutting the bread up into squares. 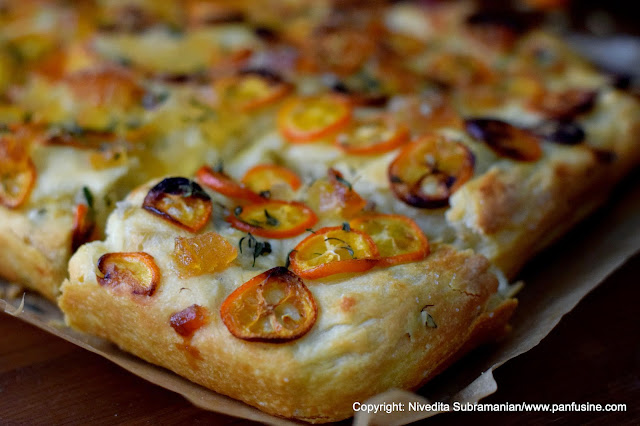 Serve warm as an afternoon snack for tea time (with a piping hot cup of chai, of course) or just tuck in as is.

Thank you Oxo & Melissa's Produce for the opportunity to create this fabulous recipe.