A Whale of a Kale Tale! Harissa roasted Kale sprouts with Cashews. 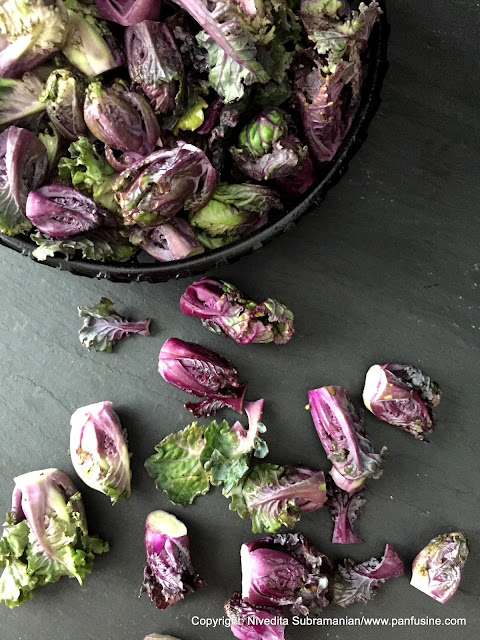 Kumquats and Kale - an interesting combination which really do not have much in common except for the common first letter in their names. But when I opened up the box sent to me from Melissa's produce, the visual beauty of the colors just struck a chord, the bright golden kumquats and the regally purple Kale sprouts.

As I stored them into the Greensaver boxes from Oxo, I noticed that  the Kale sprouts (they may be referred to as 'sprouts' but the texture is still as rugged as can be expected out of kale leaves) could be kind of sorted into two different piles, sprouts with a closed bud-like tips and some where the tiny leaves were unfurled. In any case I stuffed them together into one container, set the lock mechanism into a closed position to ensure that the sprouts did not lose moisture. Even in the closed position, the enclosed carbon filter cartridge ensures that any gas responsible for 'ripening' / wilting the leaves is completely eliminated around the produce. And ,as tempted as I'm to shout out 'Ron Popeil's famous words "set it & forget it" (for those who're wondering who on earth Ron Popeil is, here's the Wikipedia link), I simply left it alone for 10 days. Yes it was hard being objective and not able to peek in, but the end results were well worth the wait. 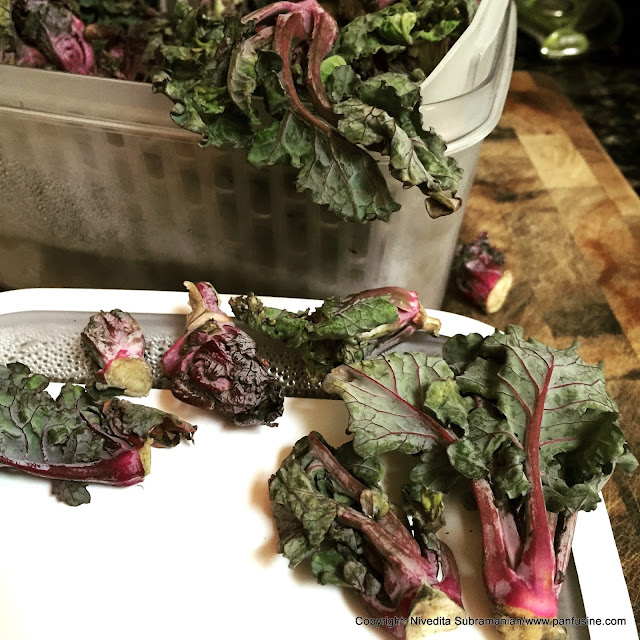 The Kale sprouts were as fresh as on the day I stored them into the refrigerator. not a single wilted leaf. If there was ever the slightest shred of doubt about Oxo's new container (which had already captured my imagination with the kumquats), it simply vanished. I'm seriously planning to stock up on these and  experiment them on the notoriously frail vegetables that one uses in traditional Indian cooking. 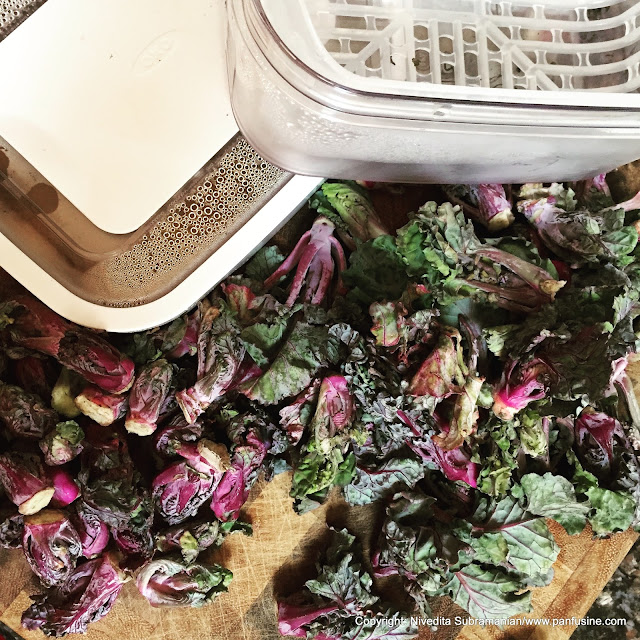 As I mentioned earlier, you could 'sort' the sprouts out into leafy tips and closed buds. My initial plan for the leafy tips was to incorporate them into a chickpea flour & ricotta dumpling which I then intended to cook up in a creamy cashew sauce (I know, It sounds divinely rich, does it not?) but those plans got a quick and easy detour thanks to a hungry husband  who was getting ready to head out to work. I ended up sauteing the leaves (cut fine into a chiffonade) along with onions whole spices and a touch of garam masala. 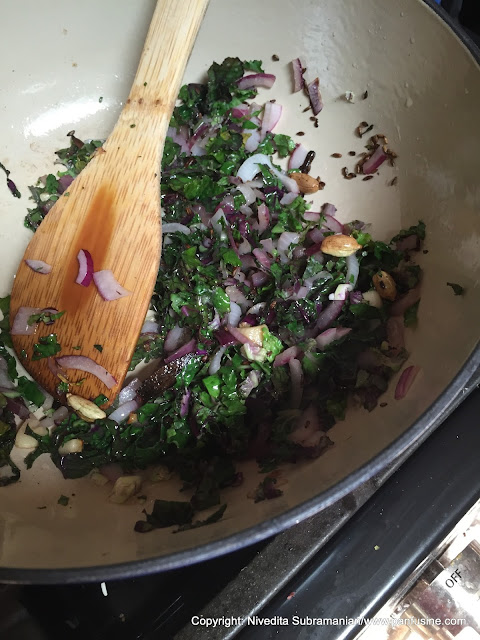 I then added about 3 cups of cooked rice and whole lentils and folded the entire lot together to make a nutrition & healthy rice dish that we then polished off with some plain yogurt & Mango relish. 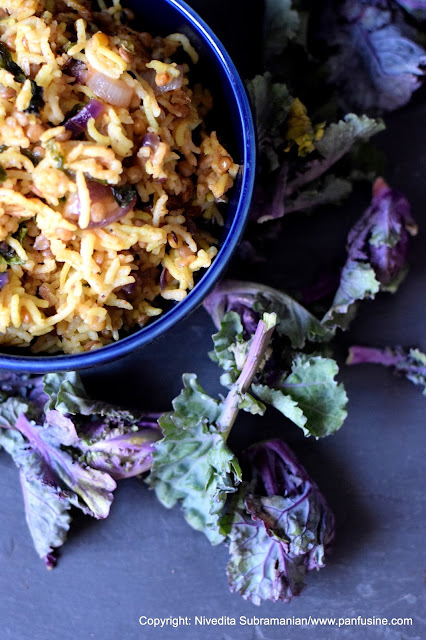 The Kale 'buds' were definitely the star of the entire lot. They reminded me of  Brussels sprouts but much lighter, without that tightly coiled density of the leaves.In fact, so elegant, that all it took was a simple roasting with the correct spices to showcase their glorious fresh flavor. 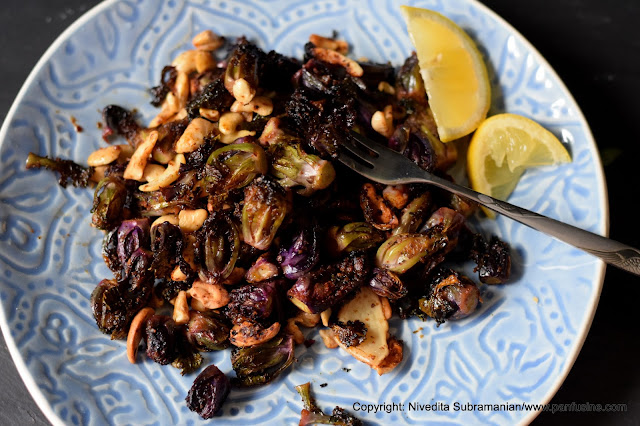 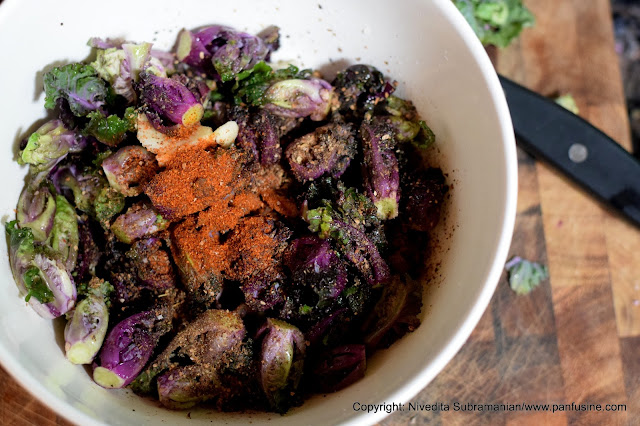 Rinse and trim the kale sprouts to remove any excess stalks. In a large mixing bowl,  combine the  Kale, the smashed garlic clove,  Harissa spice blend, salt and oil. Using your hands, gently mix together the spice blend  and the oil until it evenly coats the Kale. Allow the sprouts to marinade for about 15 - 20 minutes while the oven is preheated to 450 F. 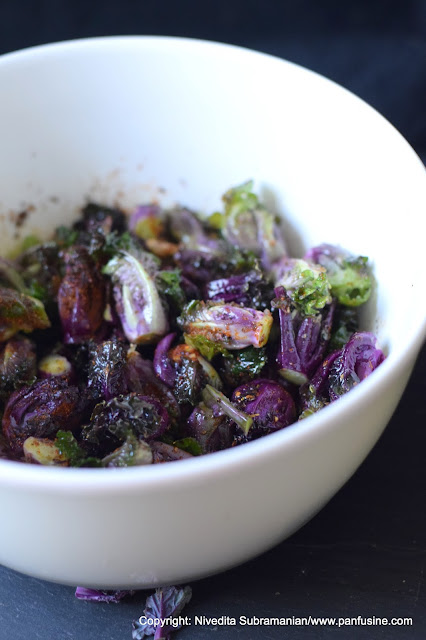 Transfer the sprouts to a baking pan lined with parchment paper. 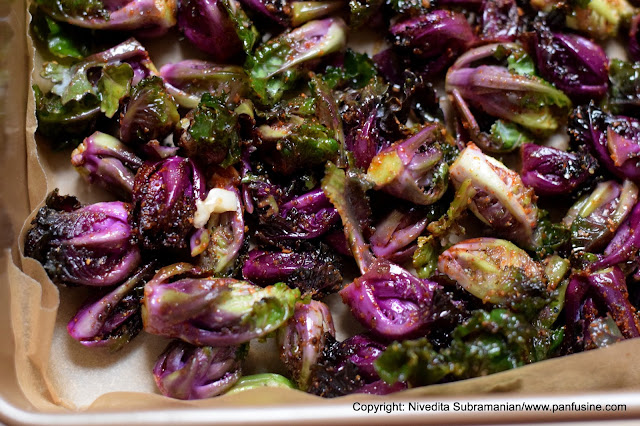 Into the same bowl that held the marinaded sprouts toss in the cashew nut and coat with the spice blend sticking to the  walls of the bowl.

Place the baking tray into the oven and allow to roast for 10 minutes. Remove the tray after this time and add the cashew nuts to the semi roasted vegetables and return to the oven for another 10 minutes (the cashews need less time in the oven). You could add some raisins or sweetened cranberries along with the cashews if you prefer (my family does not care for the sweet element, so left it out)
Transfer onto a serving dish, drizzle with wedges of lemon and serve piping hot. 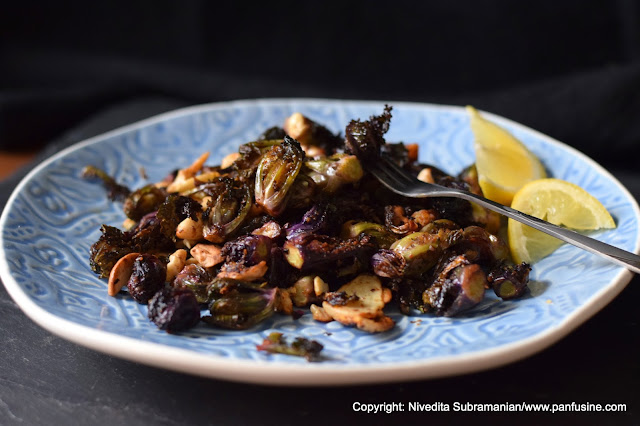 And yes, about that single clove of Garlic - feel free to toss it after roasting if eating a chunk of garlic as is does not appeal to you! 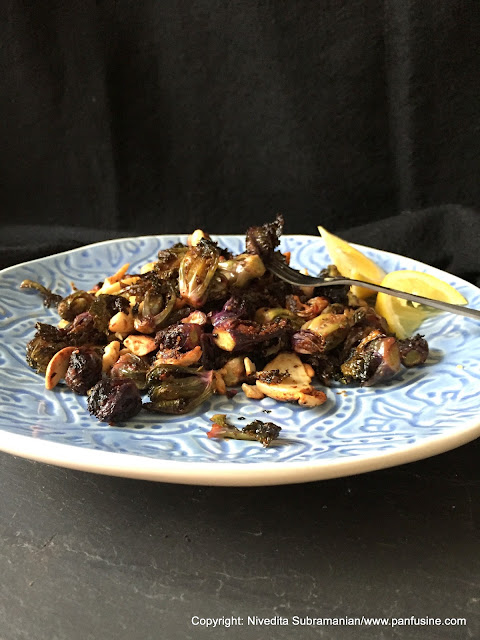 Thank you once again to Ms. Veronica Chan from Oxo & Melissa's produce for this splendid opportunity to test a fantastic set of products and produce.