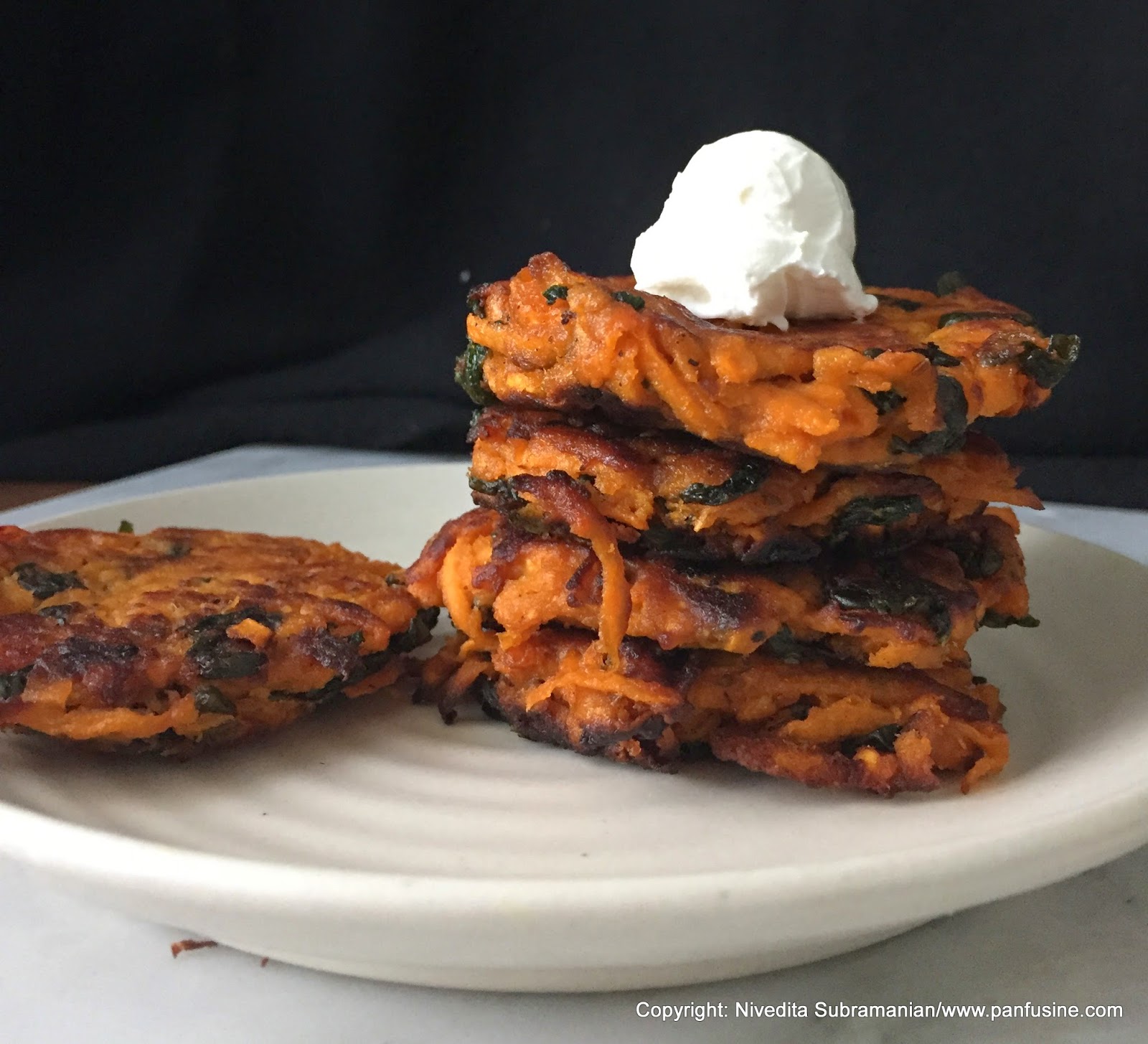 As seems to be the norm these days, I was up last night uploading photographs of Latkes for my Hanukkah post, taking care to transfer some from my camera as needed and then, BAM!, Lady Lethargy struck accompanied by her little sloth of a sidekick, Polly Procrastination. And yet again,  I resigned myself to another session of writer's block when nothing ever seems to flow out of my fingertips to even call respectably call itself a head-note, leave alone a blog post.

And then it happened.. A routine run of errands and a  change of Radio stations, (My kids love to listen to the Christmas music when riding along and I cherish the opportunity to turn back to my staple NPR broadcasts whenever I can this season) and there I was headed to the grocery store and listening to Leonard Lopate interview Deb Perelman of Smitten Kitchen on Hanukkah dishes. T'was an extra twist of fortune that I was round the corner from the parking lot at Wegman's Grocery. I dialed in to the show and was fortunate enough to be let loose on the air despite my babbling away to the person who picked up the call. For all of you interested in listening to the segment, here is the link.

My latkes this year were made with traditional Indian ingredients that are not so well known in  mainstream American cooking. The first one was a sweet potato  latke with wilted fenugreek greens (called Methi and sold in Indian grocery stores right beside the spinach and cilantro) and the other one was a totally delightful surprise ingredient, Banana stem. Yep, found this treasure at the Indian store last weekend. 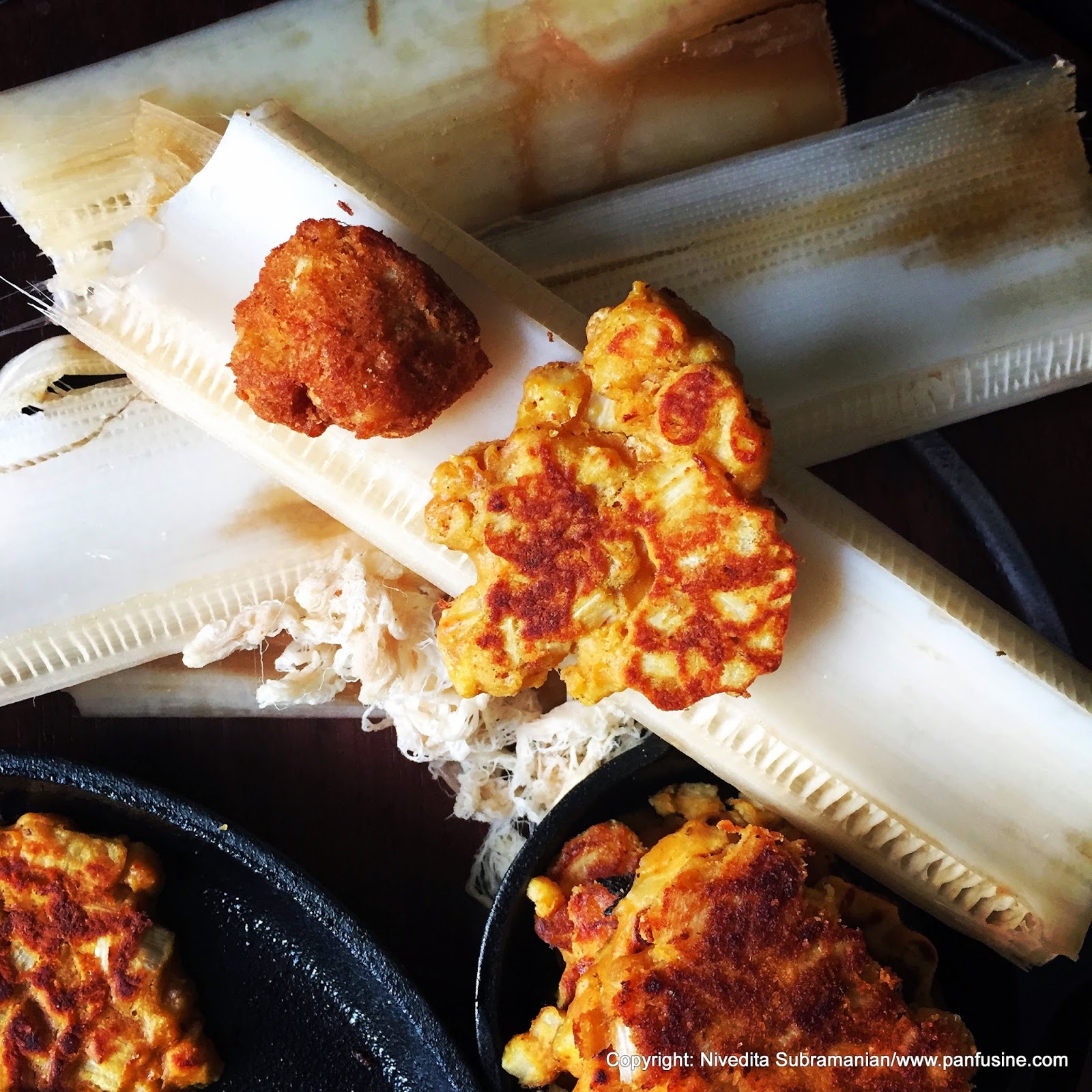 For those unfamiliar with Fenugreek greens, they are sold in bunches at many Indian stores. The leaves resemble those of clover but without the 'heart' shaped bifurcation. (In fact Fenugreek is a legume, not a spice and is related to clover and other leguminous plants such as mung). While the leaves  are tender and wilt easily, the stems - even the part that directly connects to the individual leaf are tough and unpleasantly chewy, take care to remove just the leaves and compost the rest of the twiggy stems & roots).

Heat 2 tablespoons of oil and add the bishops weed once the oil gets shimmery hot (The same way that Cumin is tempered in other Indian dishes). Once the seeds 'pop' and emit  their characteristic thyme-like aroma, toss in the fenugreek leaves along with the tomato powder /paste. Season with Salt and Paprika, and allow to cook at low heat until the leaves completely wilt. Set aside while you prep the sweet potatoes. 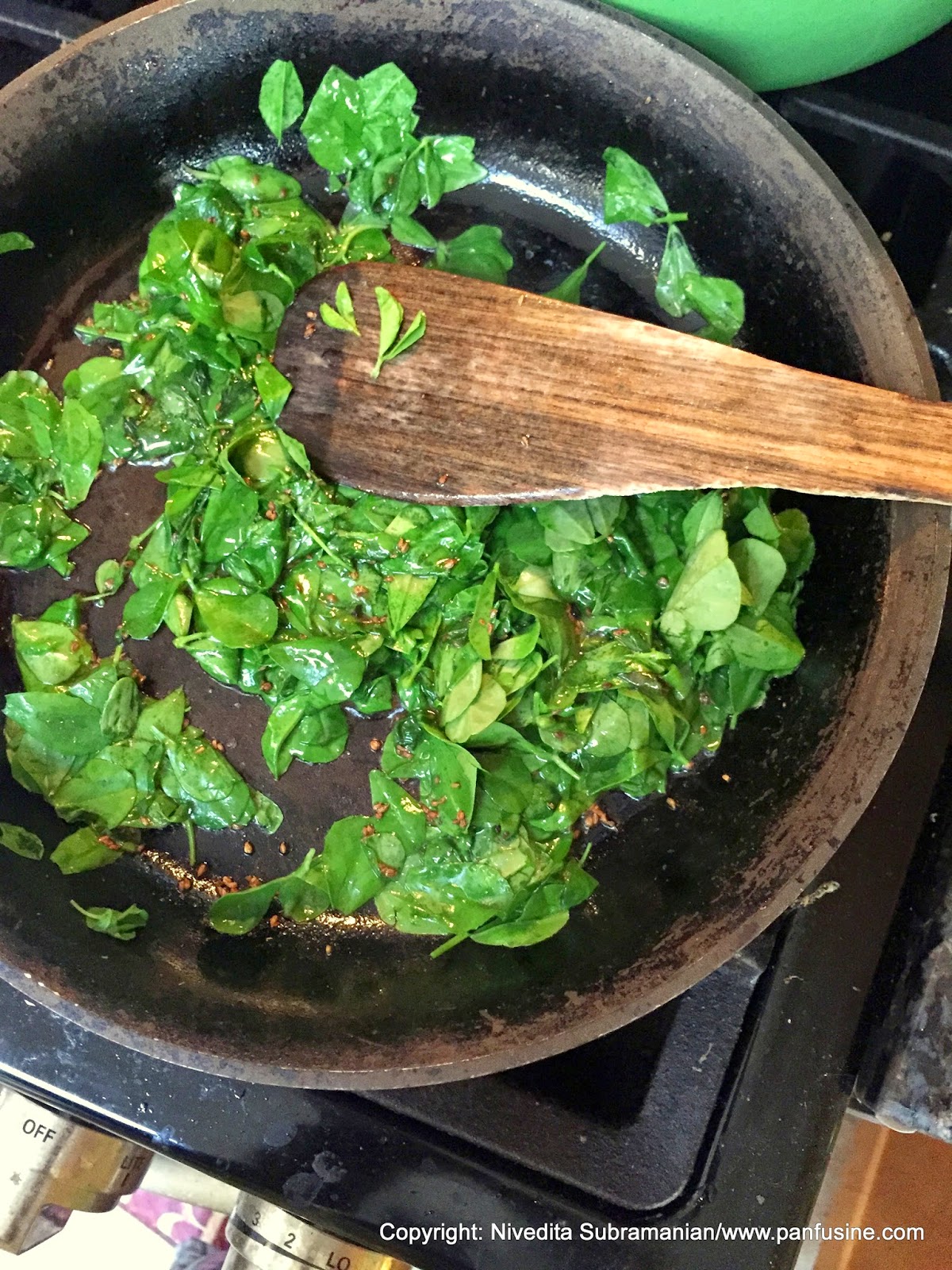 Combine the shredded sweet potatoes with the wilted fenugreek greens and lemon juice and toss to disperse throughout. 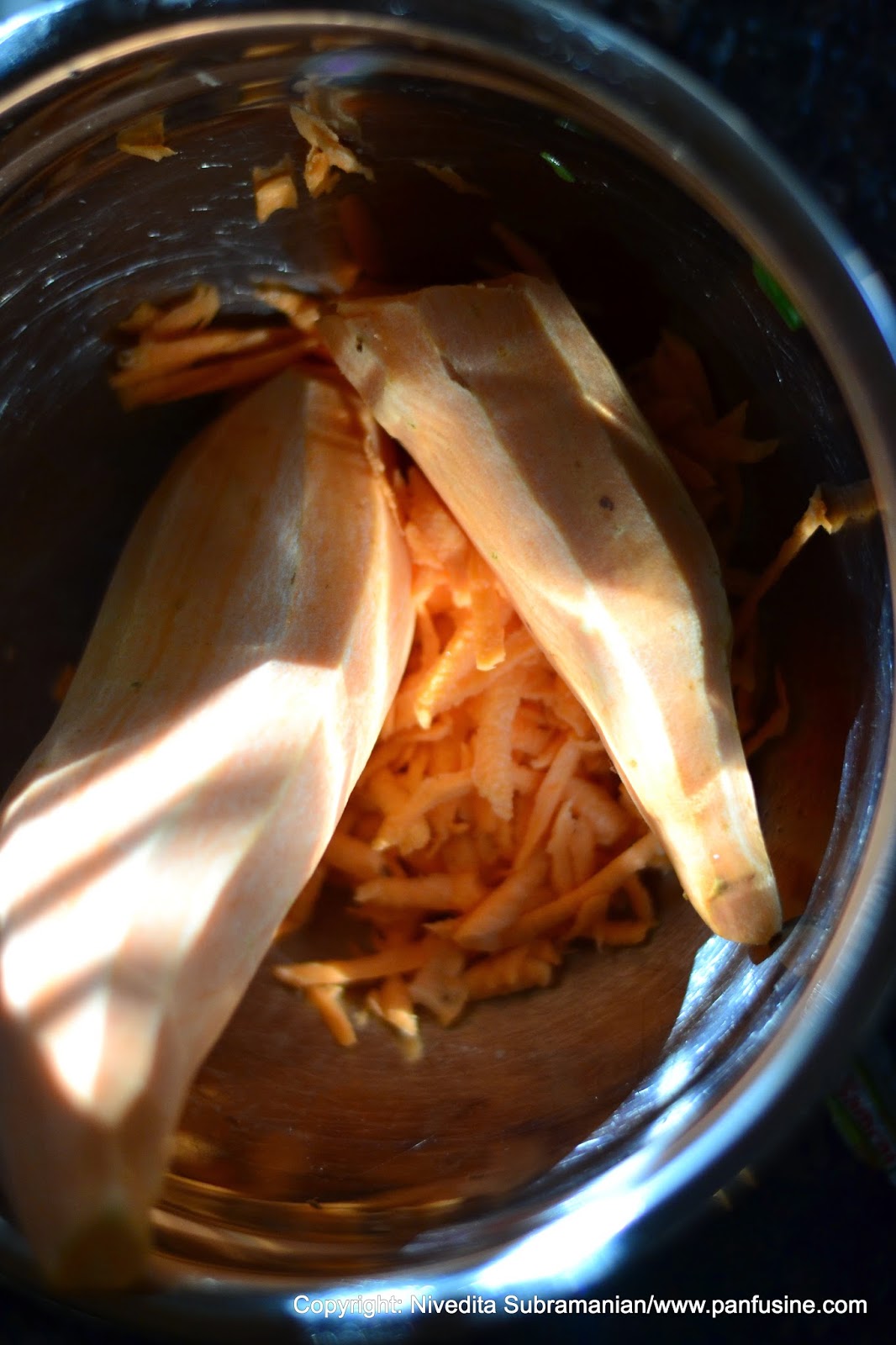 Sprinkle in the Garbanzo flour so that it coats the mixture enough to bring it together into a mass. Taste and adjust for seasoning with salt and paprika. Divide into 8 - 9 portions 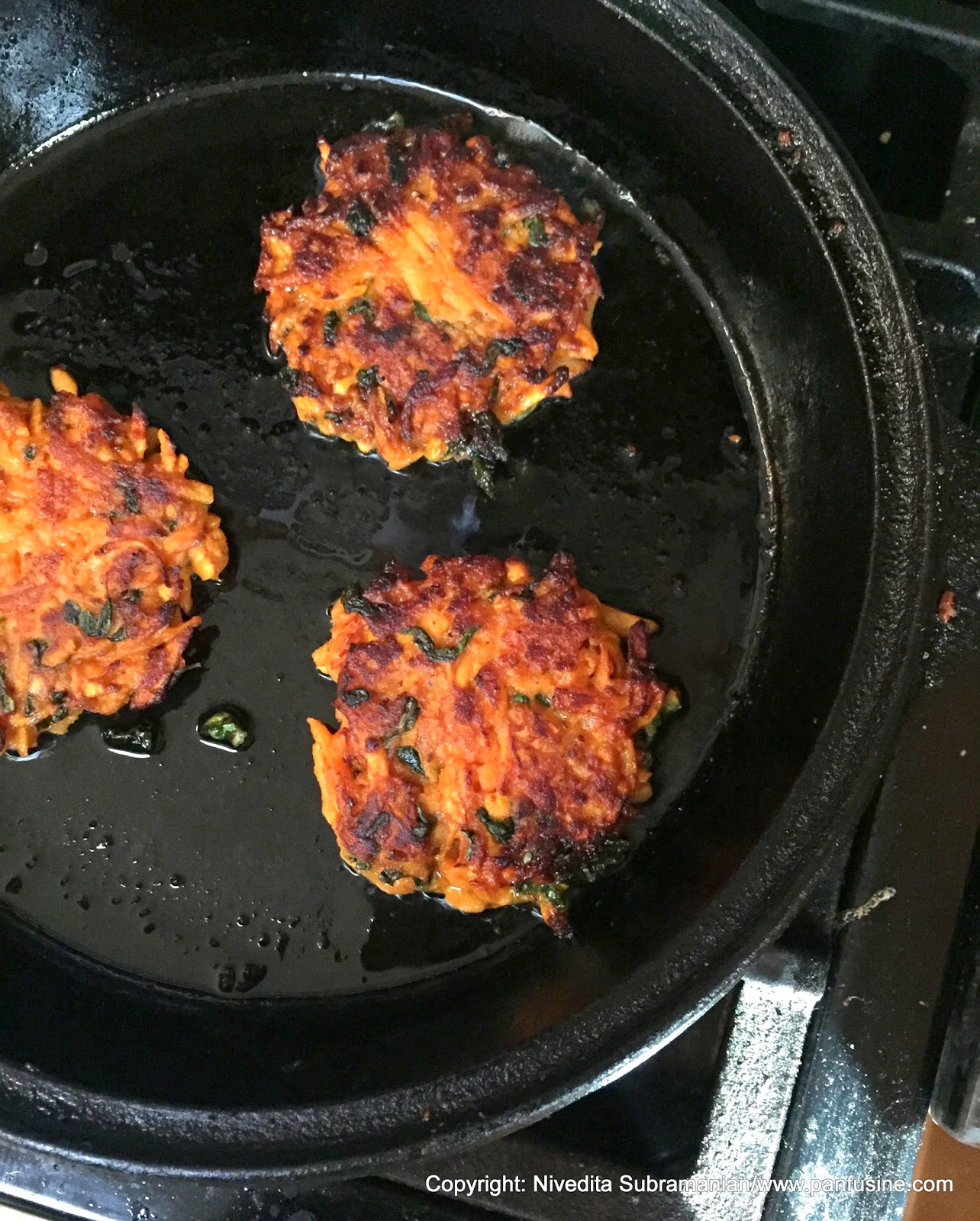 Heat a cast iron skillet and add about a tablespoon or two of oil per latke. Pat each portion of the sweet potato/ fenugreek mix into a disk and gently place it into the hot pan (I prefer  to cook not more than three at a time). Cook each side at a medium heat for about 5-6 minutes on each side until the sides are cooked and crisped up. transfer onto a tray lined with kitchen paper to absorb any excess oil.

Serve hot with any sweet or tangy chutney of your choice or with plain Labneh as I did. 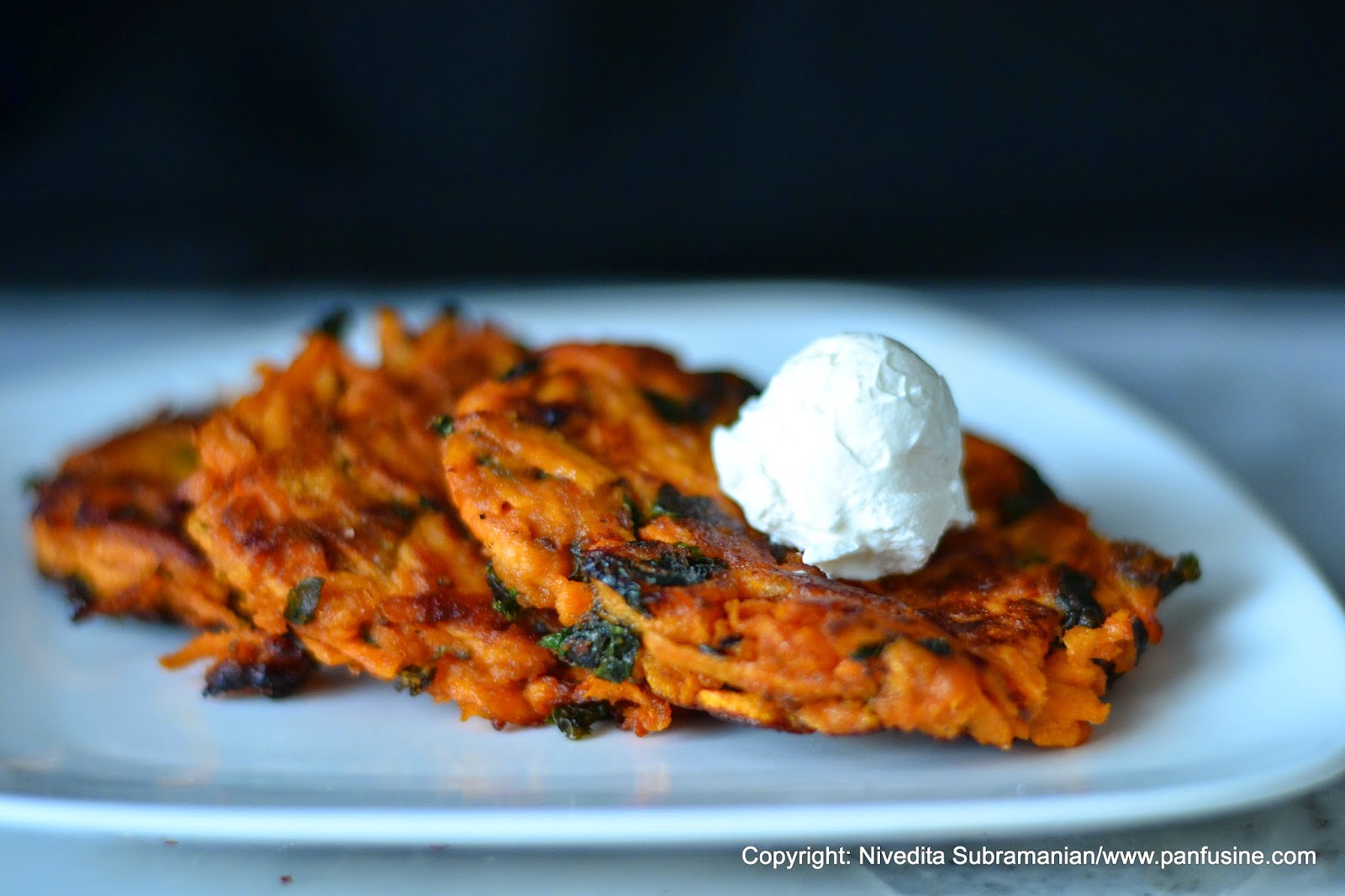 Wishing everyone who celebrates a joyous & happy Hanukkah!

& yes, I promise to upload the recipe for the banana stem latke ASAP.