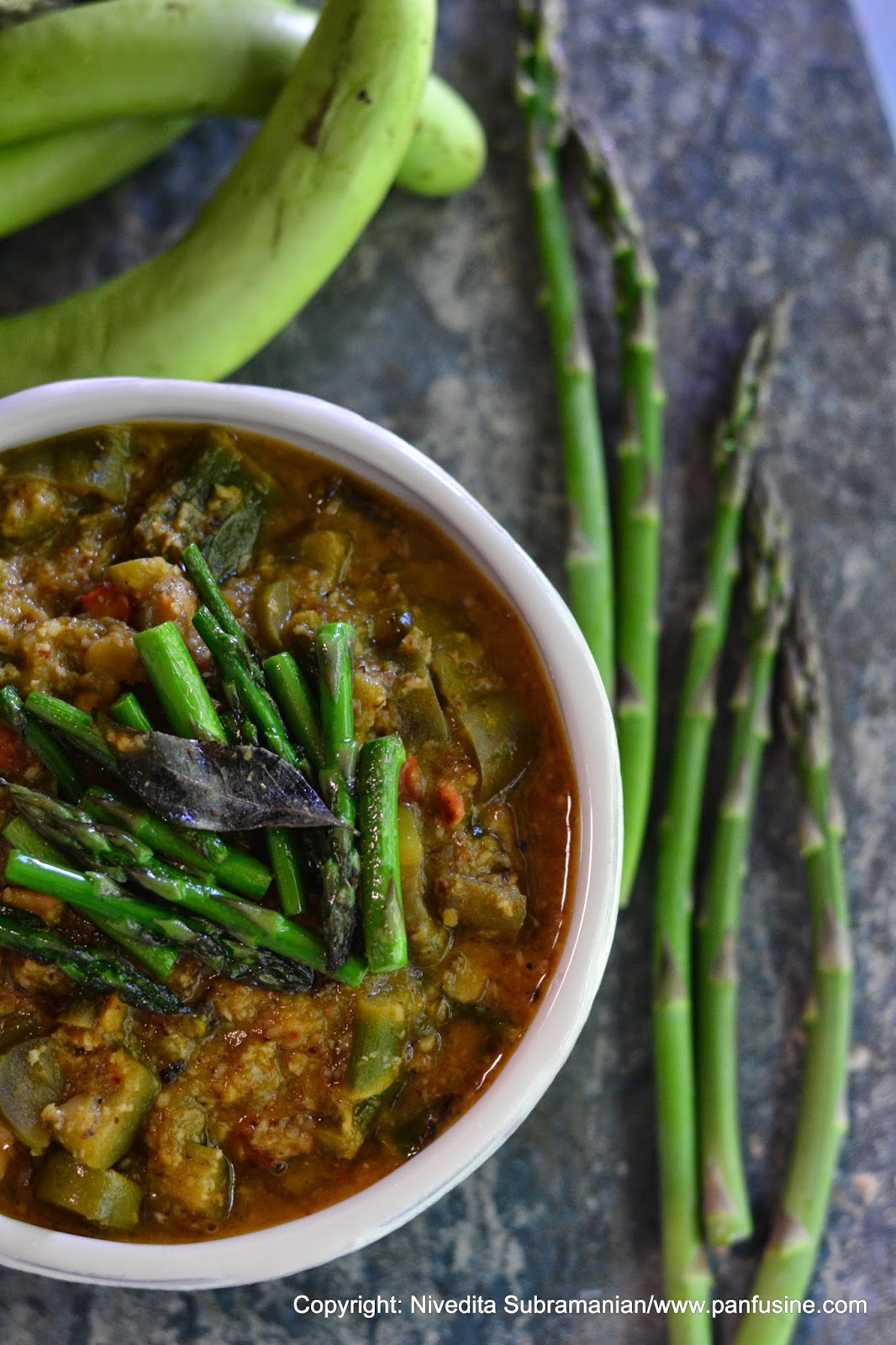 South Indian cuisine technically does not exist. And I'm NOT being flippant or trying to get a chuckle out of anyone. In terms of cuisines being defined by Conquerers and their influence, It does not stand a chance. We never had martial interactions with other civilizations, like the Greeks and the Persians, or the Catholic influence that spread from Goa to South America via the Phillipines (Ref: Rachel Laudan).

That is not to say that Intra nation (if there is ever such a term) influences did not shape the cuisine. The most significant of those influences was through  the Marathas, a valiant , martial clan from Western India, who ruled Tanjore in Southern India.  As a result many of the recipes  that arise from this region of South India have share similar sounding names for dishes from both Western India & Tanjore, the most common examples that come to mind are Usal/Usli and Pitla/Pitlai.

Speaking of Pitlai, Its a flavorful savory, nutty thick stew spiced with coriander, and hints of peppercorn. As for the vegetables that go into this stew, for some reason, Bitter melon is the favorite top candidate, followed behind by eggplant, and the occasional green tomato coming up a distant third. Perhaps the reason is because there aren't really any other candidates that hold up in terms of flavoring and texture to the intense flavor profile of the gravy. 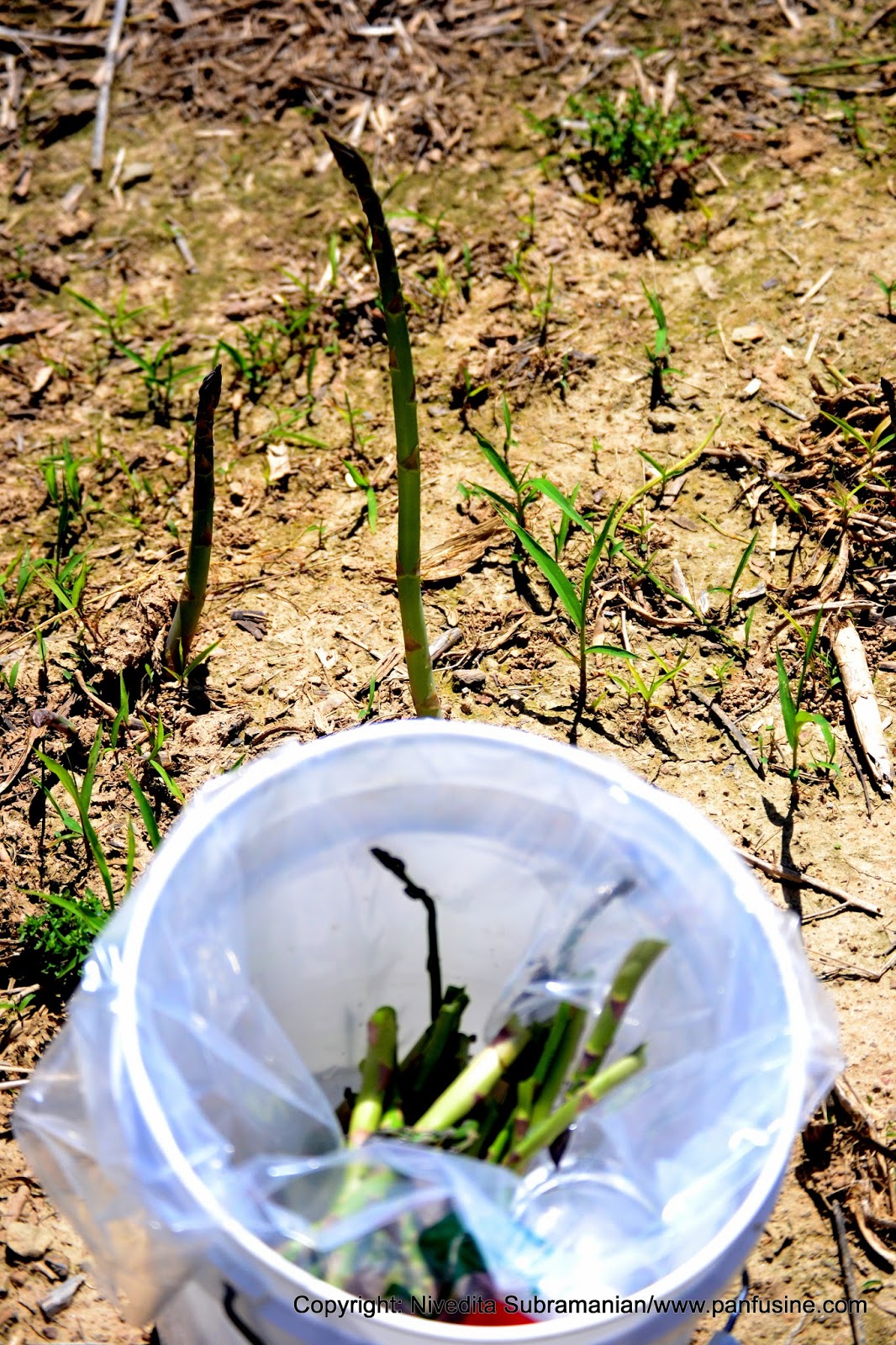 T'was eggplants that I had planned for yesterday's dinner of Pitlai, Halfway through prepping the eggplants, I realized that I had a large stash of asparagus that I had picked from Terhune orchards in Princeton. As glamorous and bright green as they look standing tall at the grocery supermarket stand, Its a disappointment to see them in real life. They look camouflaged, the bright green almost masked as they poke out of the earth like aerating Pneumatophore roots of a mangrove tree. 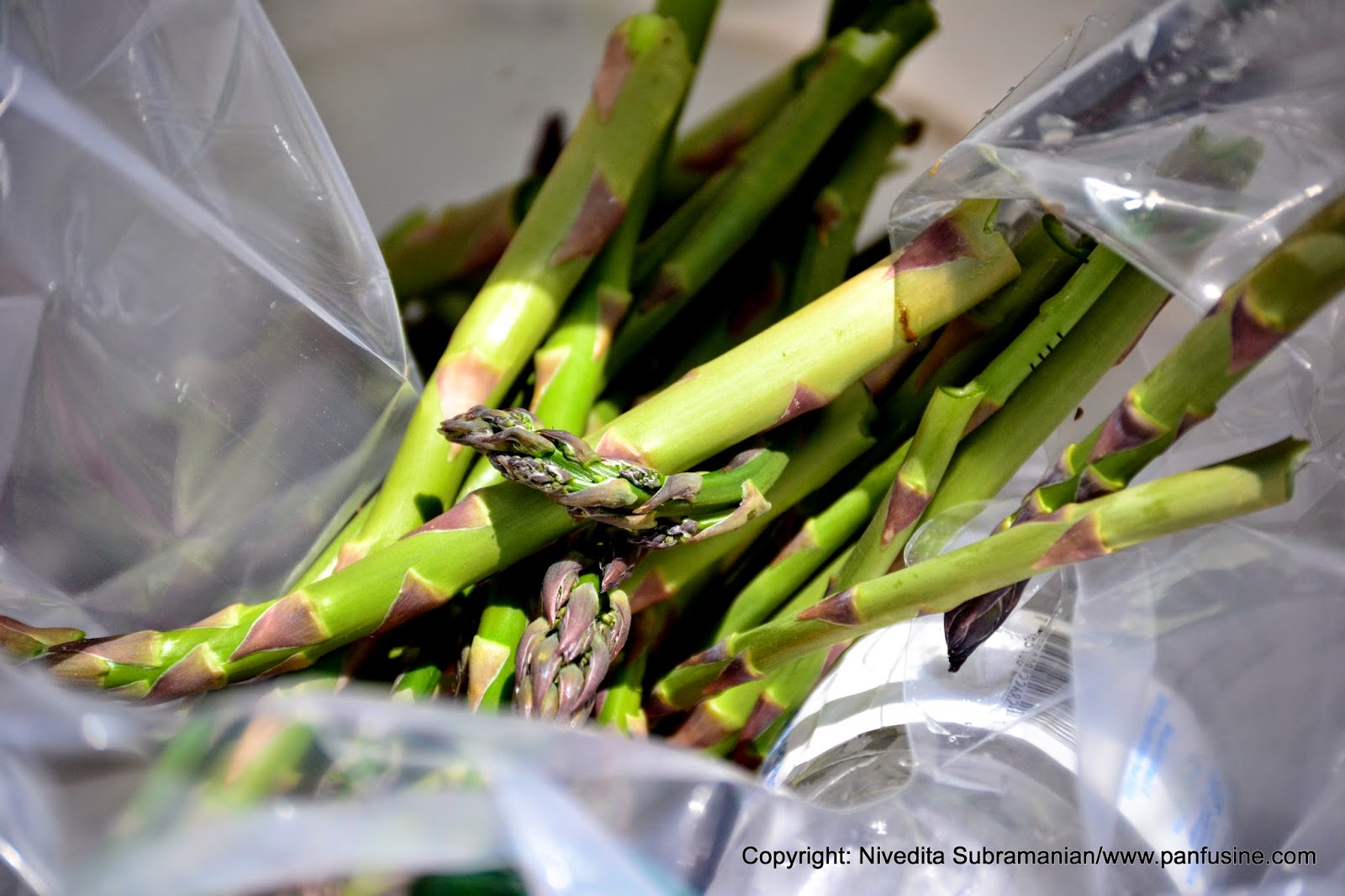 The mesmerizing magic sets in the minute your fingers snap off the shoots from the group, They ooze a clear vegetal sap that just screams summer, and then you're hooked, Its hard to keep yourself in check as you snap away at every shoot, thin ones, fat ones, curled ones & straight ones . If you get a chance to pick these yourself, go for it! 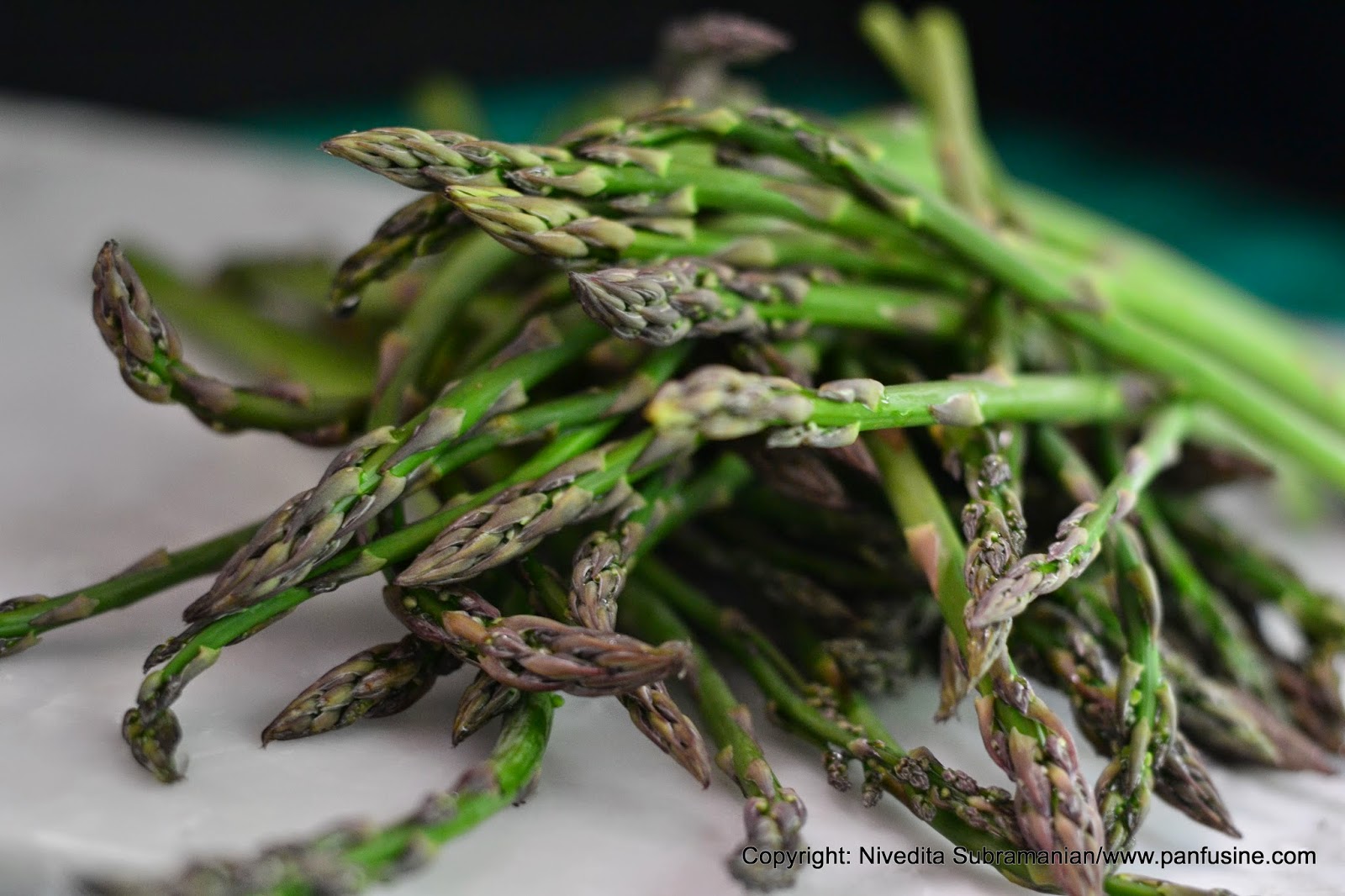 Set the Tuar dal to cook using a pressure cooker, until its soft and completely mushed.

In s skillet, heat the 2 teaspoons of oil and toast the coriander, arbol chiles, Urad dal, chana dal and the pepper corn, until the dals and coriander turn a reddish brown. Transfer to a small blender jar, add the coconut and blend into a smooth & thick  paste using as much water as needed. Set aside. 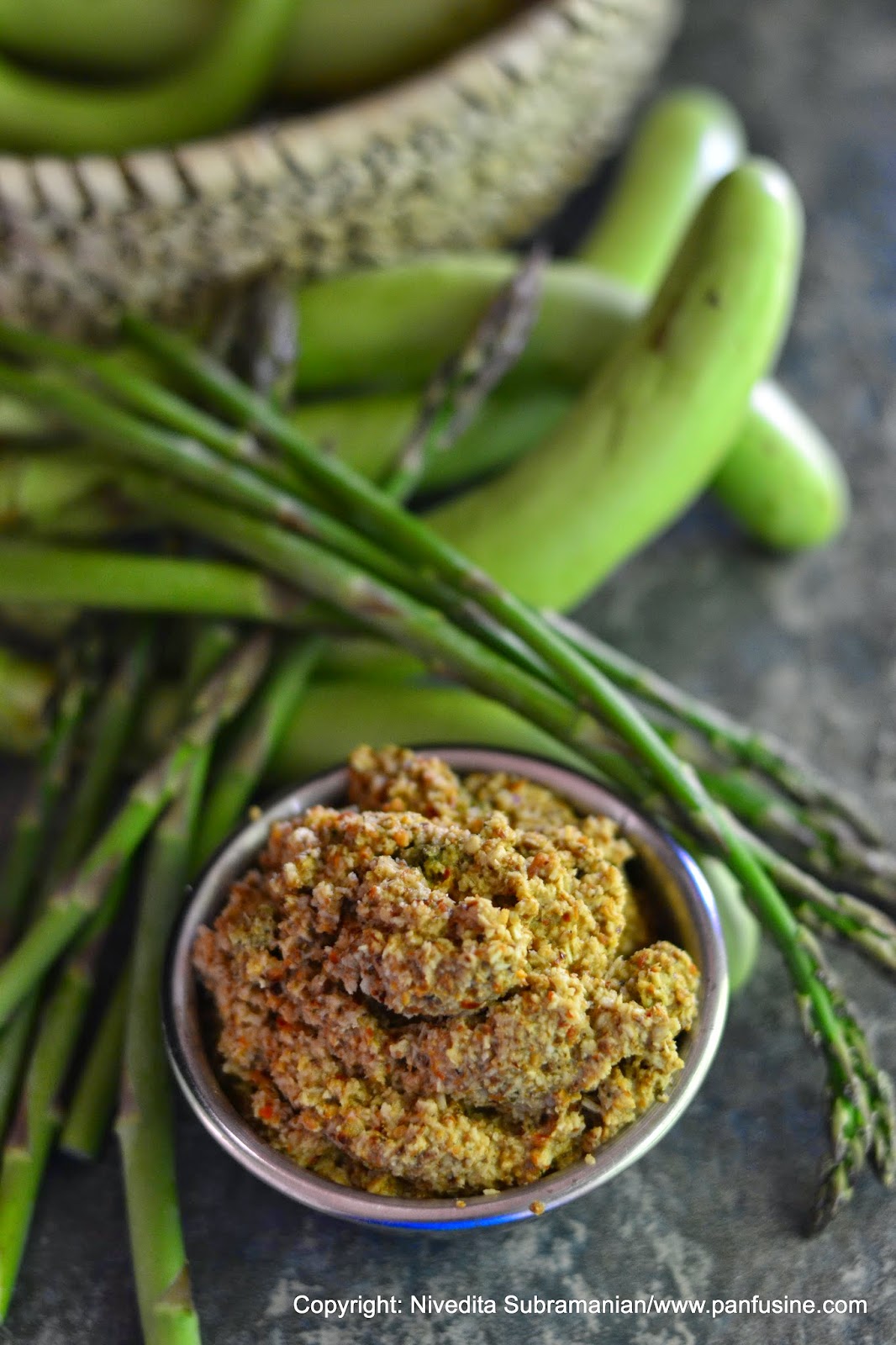 In a pot, heat the oil and add the asparagus, Saute for about a minute and then add the tamarind, sambar powder, sugar and the turmeric, add a cup of water and allow the mix to simmer until the raw aroma disappears. Add the spice blend paste and tomatoes along with another cup of water and simmer until the tomatoes turn soft. Finally add the mashed dal and bring to a boil and immediately remove from heat.

In a separate skillet, heat the ghee and add the mustard seeds, once they sputter, add the curry leaves and the cashew nuts, allow the cashews to brown lightly. Add this to the Pitlay & stir in.

I usually add cilantro for garnish, but today I decided to cut  up a few  (~5-6)extra stalks of asparagus, Saute them lightly in ghee and add them over the dish.

Serve hot with plain rice or even fresh roti.