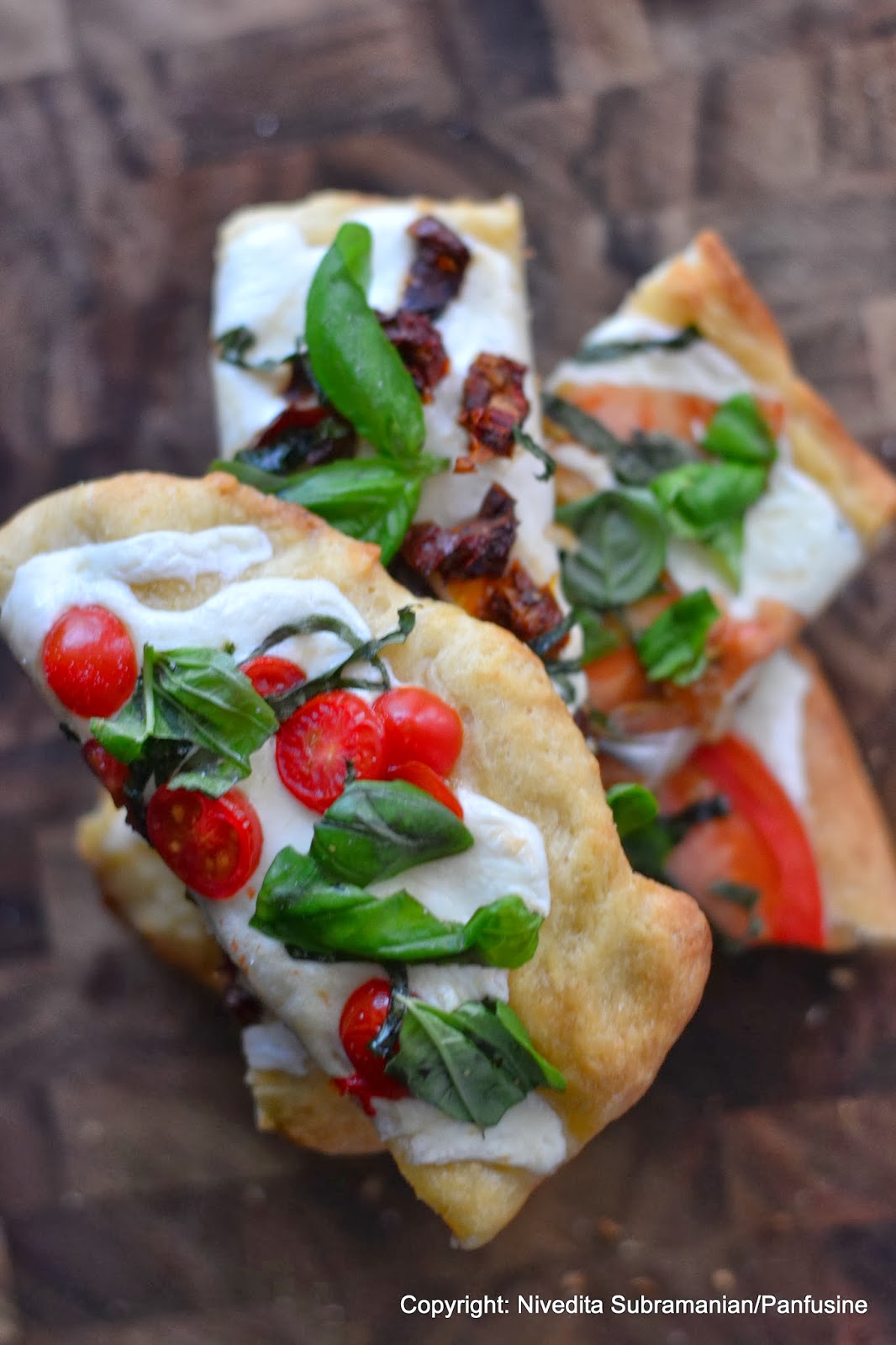 It almost seems like yesterday when a group of us bakers (wannabe) started with posting  yeasted goodies for this series. It was pull apart bread and a part of me gets nostalgic and wants to make some right now when I think about it. Well, thanks to the fact that Aparna Balasubramanian (My  Diverse kitchen ) is constantly on the search for different delightful breads & cookies, there is only a slim slim chance of a repetition!

We had a poll about what we should bake in January & my pick got the most votes (I detect a whiff of gloating at my end here, don't you?) and so, this months recipe is that of Focaccia Caprese.

Focaccia is a classic Italian bread, with Greek origins interestingly and is native to the North Eastern part of the county. Caprese, as the name suggests involves tomatoes, mozzarella and basil, just like the salad.

I had 2 iterations with this particular project. The first a straight forward try with Aparna's recipe, and the second a slight tweaking using an alternate technique for the dough, that I learned from this fabulous recipe from Food52. This particular topping has Mayer lemons, rosemary, sea salt & brown sugar. 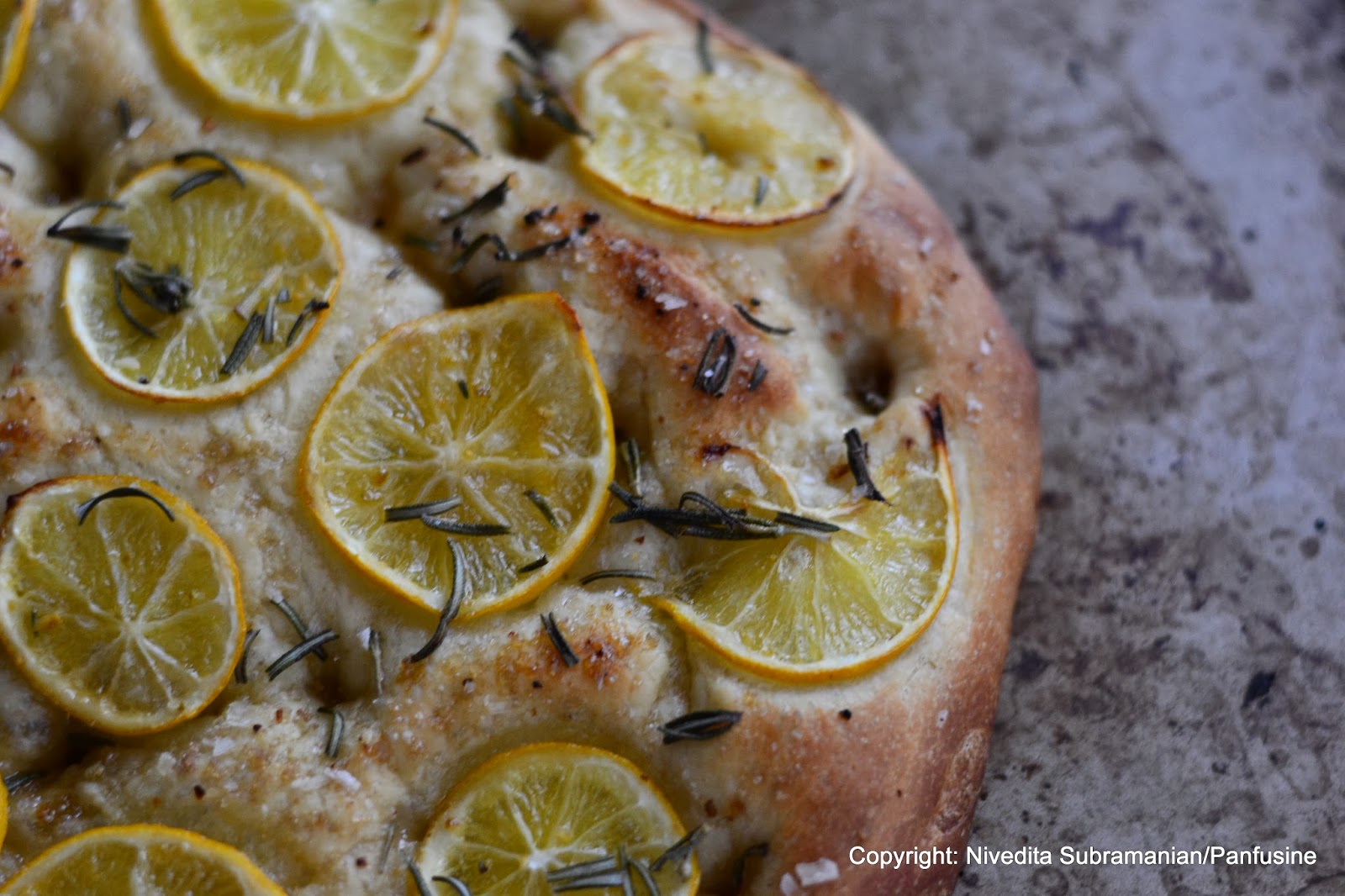 While the former was a much quicker to make and is a comforting chewy bread, The latter produced a lighter crumb and thinner crust. I  topped the first set with 4 different kinds of pomodori and fresh mozzarella.  I used smoked Mozzarella instead of the fresh cheese and roasted tomatoes for the second version. Fresh mozzarella has a lot of moisture that makes the crust a tad soggy which is taken care of with the smoked variety.. The drier smoked version also provides a great earthy depth of flavor. The store bought roasted tomatoes had a great flavor enhanced by garlic & various herbs.

The downside of baking a Focaccia Caprese in winter is the lack of seasonal tomatoes. I experimented with 4 different kinds, viz, Plum,  brown Kumato, sun dried and grape. As far as flavors go, I'd pick the sun dried and grape tomatoes any day over the other two. On second thoughts, I wonder if the fresh tomatoes contributed to the higher moisture content resulting in the soggier crust compared to the grape and sun dried tomatoes. Quite quite possible. 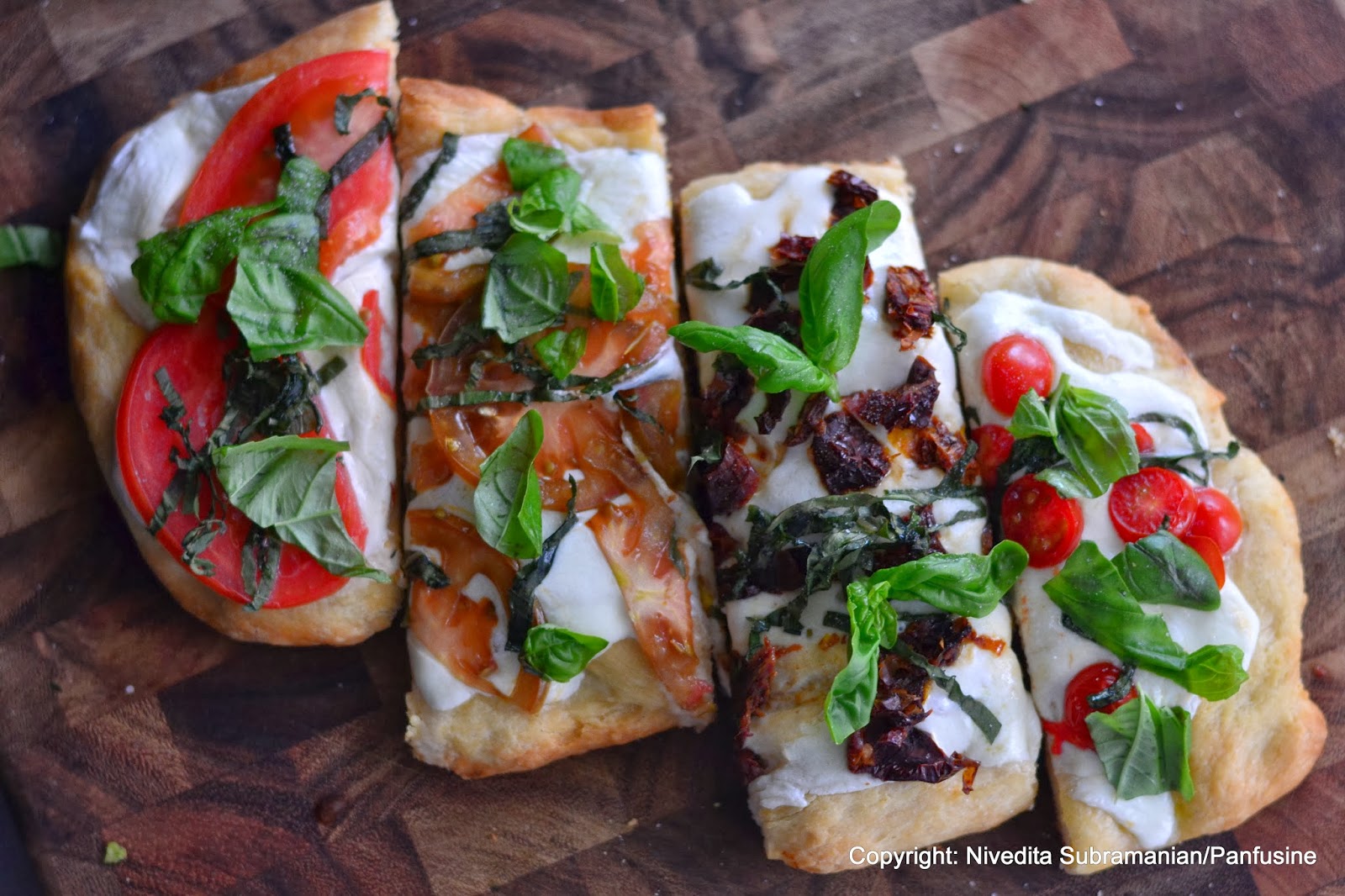 So here it is, the recipe for Focaccia Caprese: 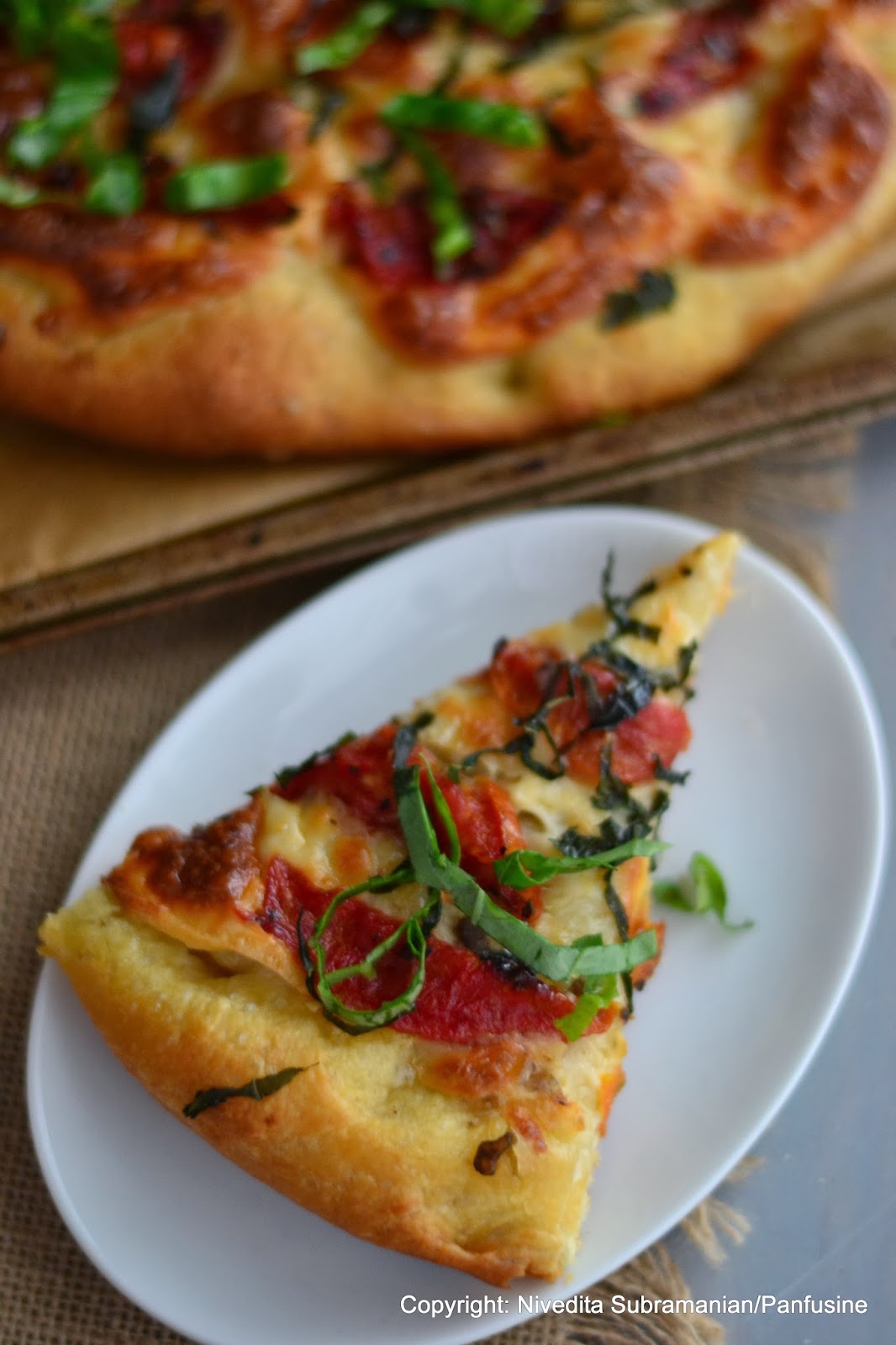 Add the yeast to the lukewarm water and whisk. Allow to sit for about 5 minutes for the yeast to dissolve and bloom. Combine the liquid with the flour, salt, sugar and the flavored olive oil. stir well with a spoon and allow the mix to rest for about 10 minutes to hydrate. Mix and fold for a minute or two until it comes together into a smooth ball. Transfer the dough into another container coated with oil. Cover and allow to rest for about 10 minutes.
Using oiled or wet hands, dip under the dough and stretch gently and fold the dough in half. Turn the bowl 90 degrees and repeat. (4 'folds' from different sides). Allow to rest for 10 minutes and repeat the sequence 3 times more. Cover the bowl with plastic film and allow the dough to rest in the refrigerator overnight.
The next day, allow the dough to sit out on the kitchen counter until it reaches room temperature.
Line two baking sheets with parchment paper and divide the dough between them. liberally brush the top surface with the olive oil. 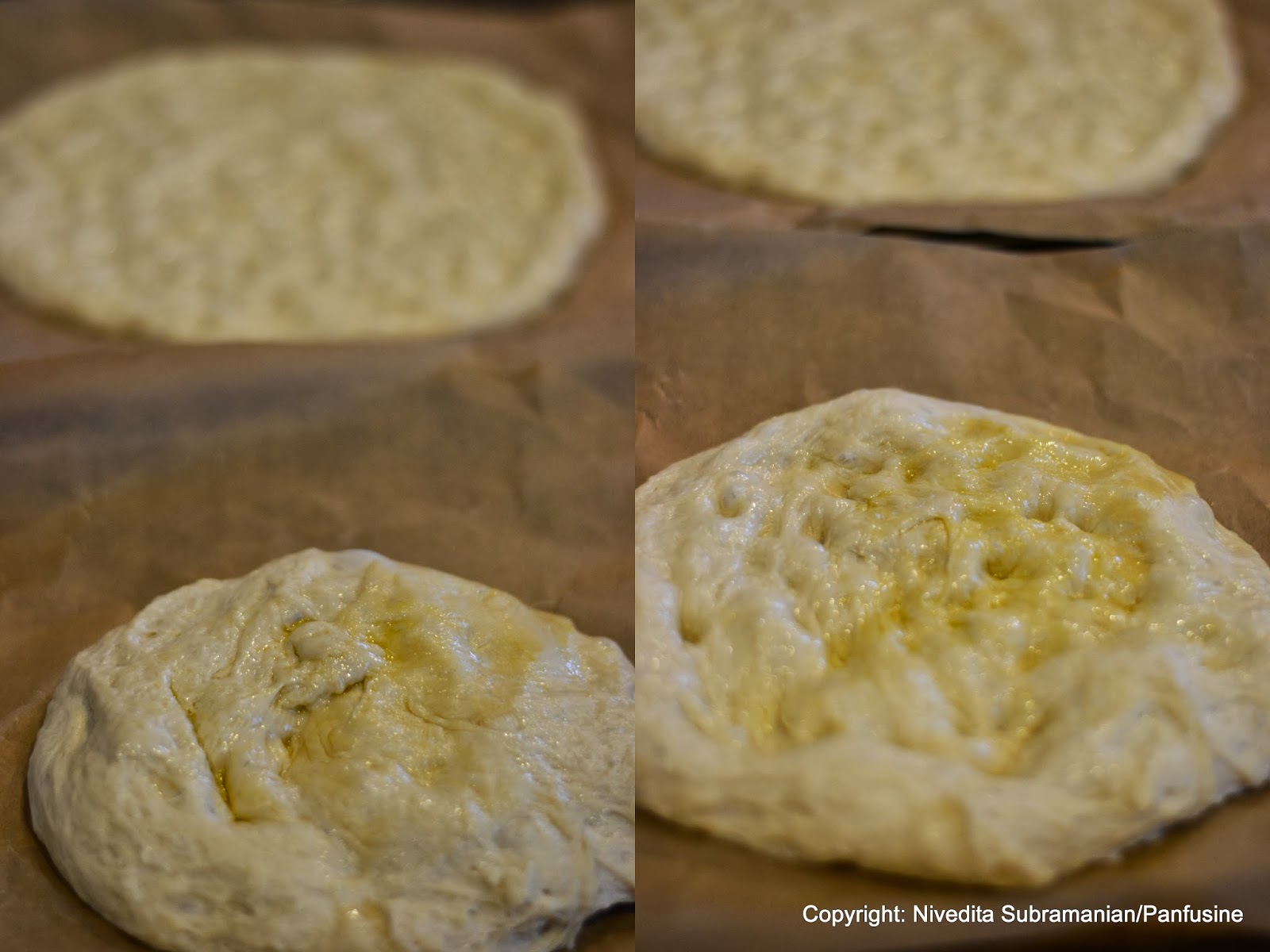 Using the tips of your well oiled fingers & palms gently poke, pat & push the dough in outward circles to at least about 9 inches in diameter. Any smaller and the dough will be too thick to cook properly.  Place in a warm place for about 45 minutes for the dough to proof a second time. Preheat the oven to 450 F while the dough rises. 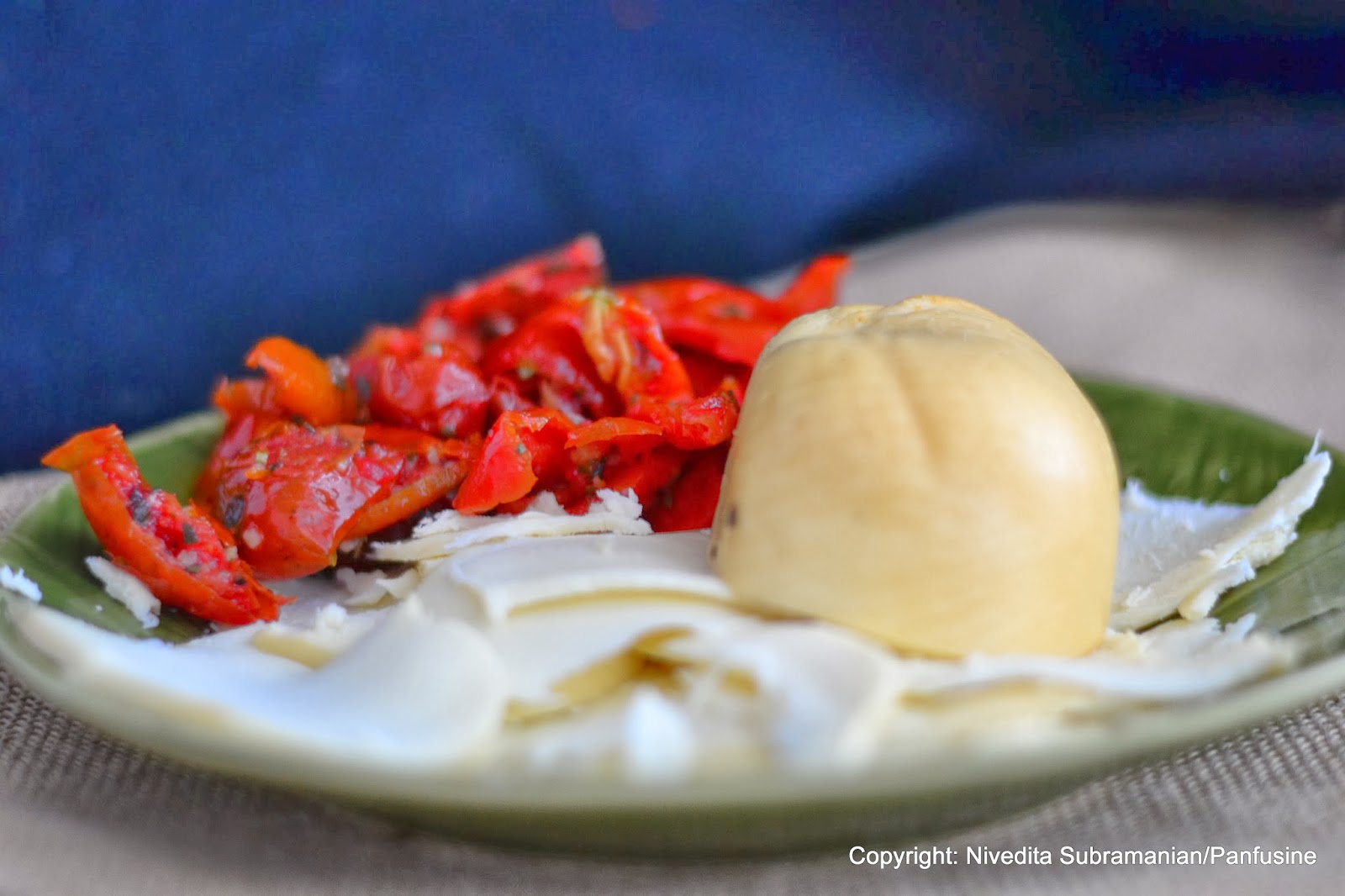 Once the dough has risen, layer the cheese over  the dough and top with the roasted tomatoes. Scatter the basil chiffonade over the topping along with the grains of smoked sea salt.

Place the trays to bake in the oven for 20-25 minutes until the exposed surfaces of the dough have turned golden brown, and the cheese has melted completely. Remove from the oven and allow to cool slightly. Cut into wedges and serve warm as an appetizer or as a light meal. 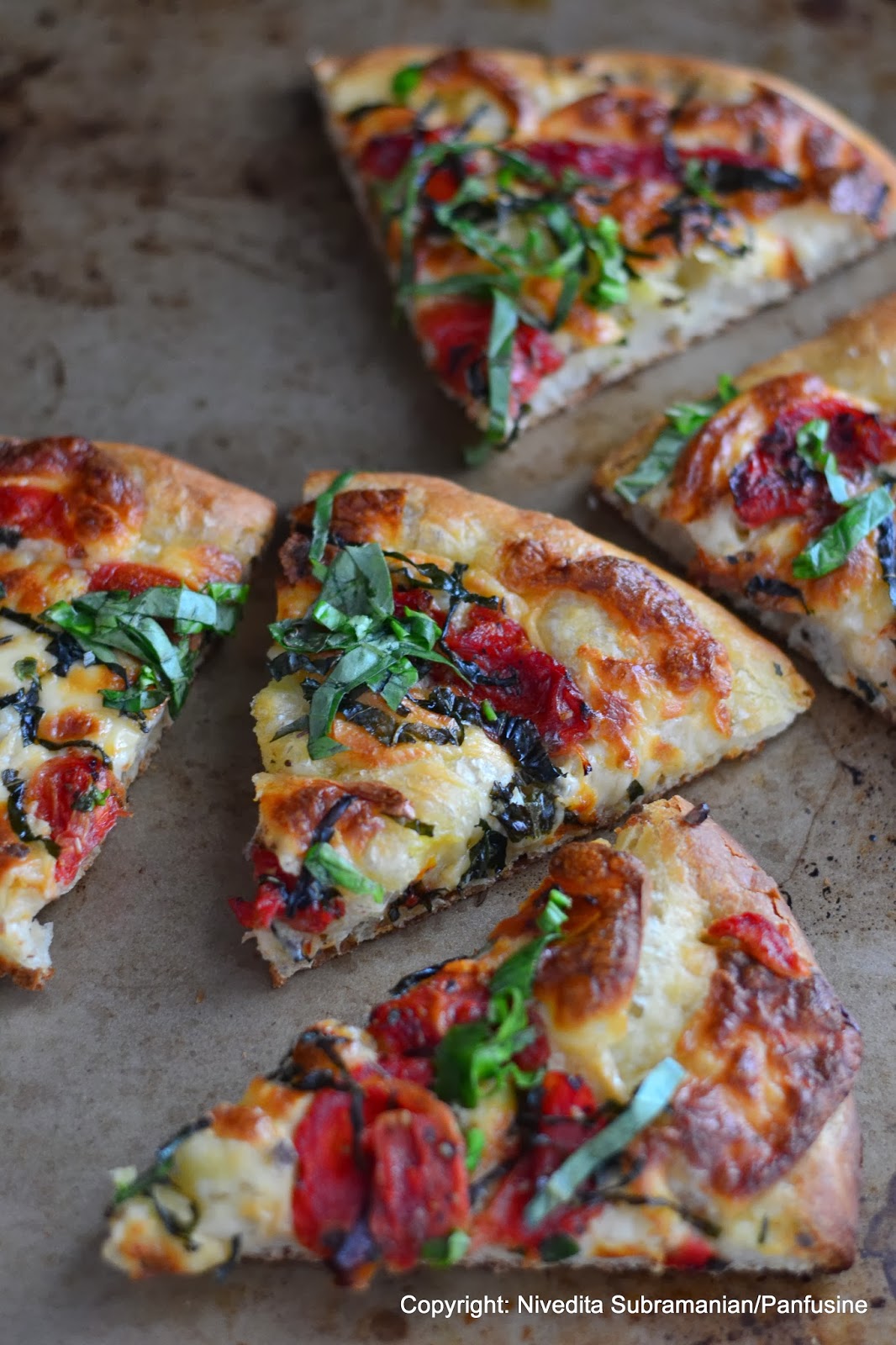 This recipe is being Yeast spotted.