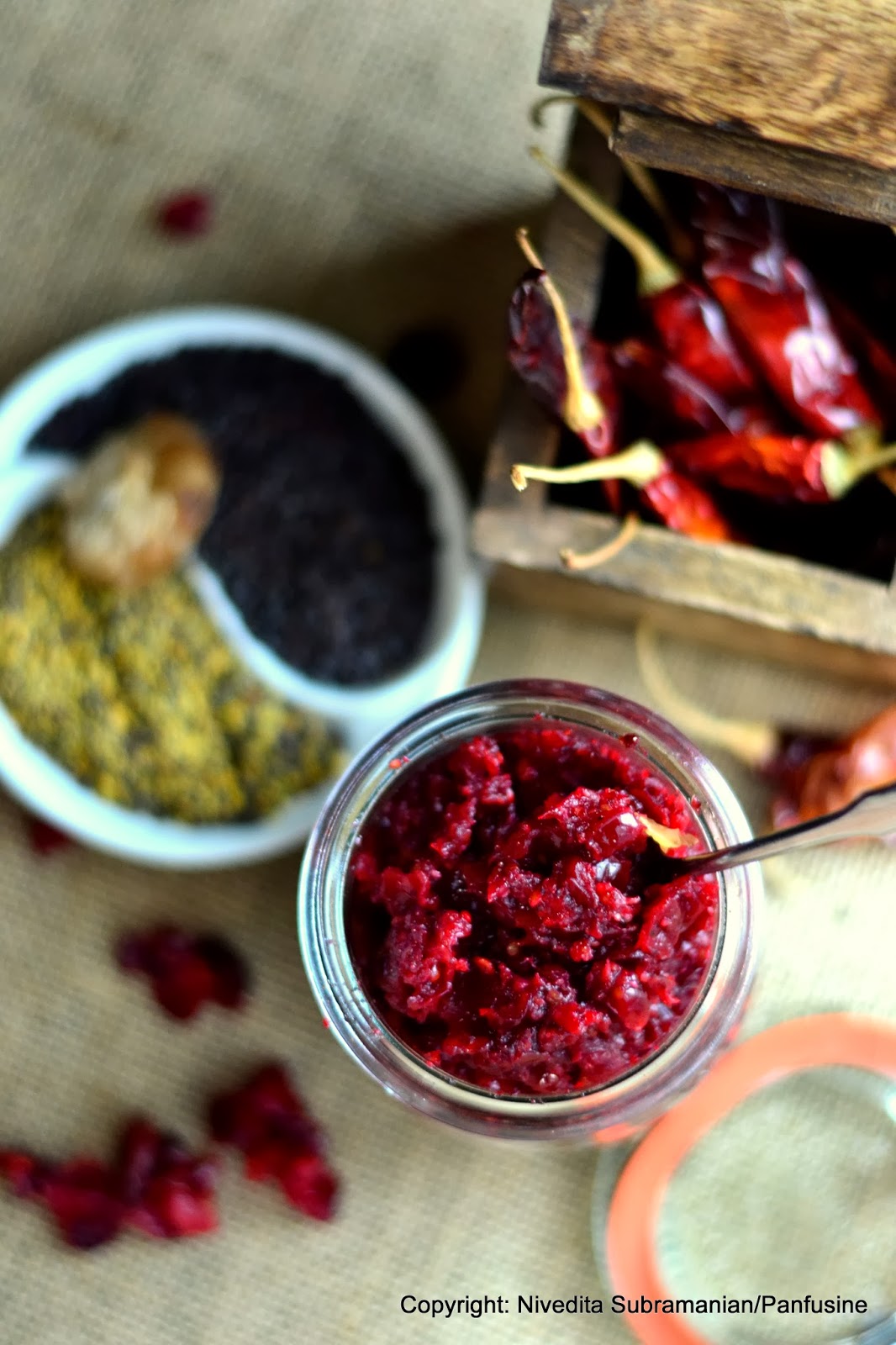 What in the world am I doing? Cranberry season went out 6 weeks ago, as soon as the Black Friday sales swept into each and every retail establishment in the country. Yeah well, looks like I've misplaced that memo. I'm still rejoicing in the availability of those gorgeous crimson berries.

A good recipe is one that you want to make repeatedly, a GREAT recipe inspires many other creations that become favorites. In this context, I owe a big vote of thanks to David Leite & that awesome  recipe for cranberry sauce posted by Renee Schettler Rossi. When the first batch of cranberry sauce got used up as is, the next batch made for some delicious craisins that went into Christmas time chocolate bark. 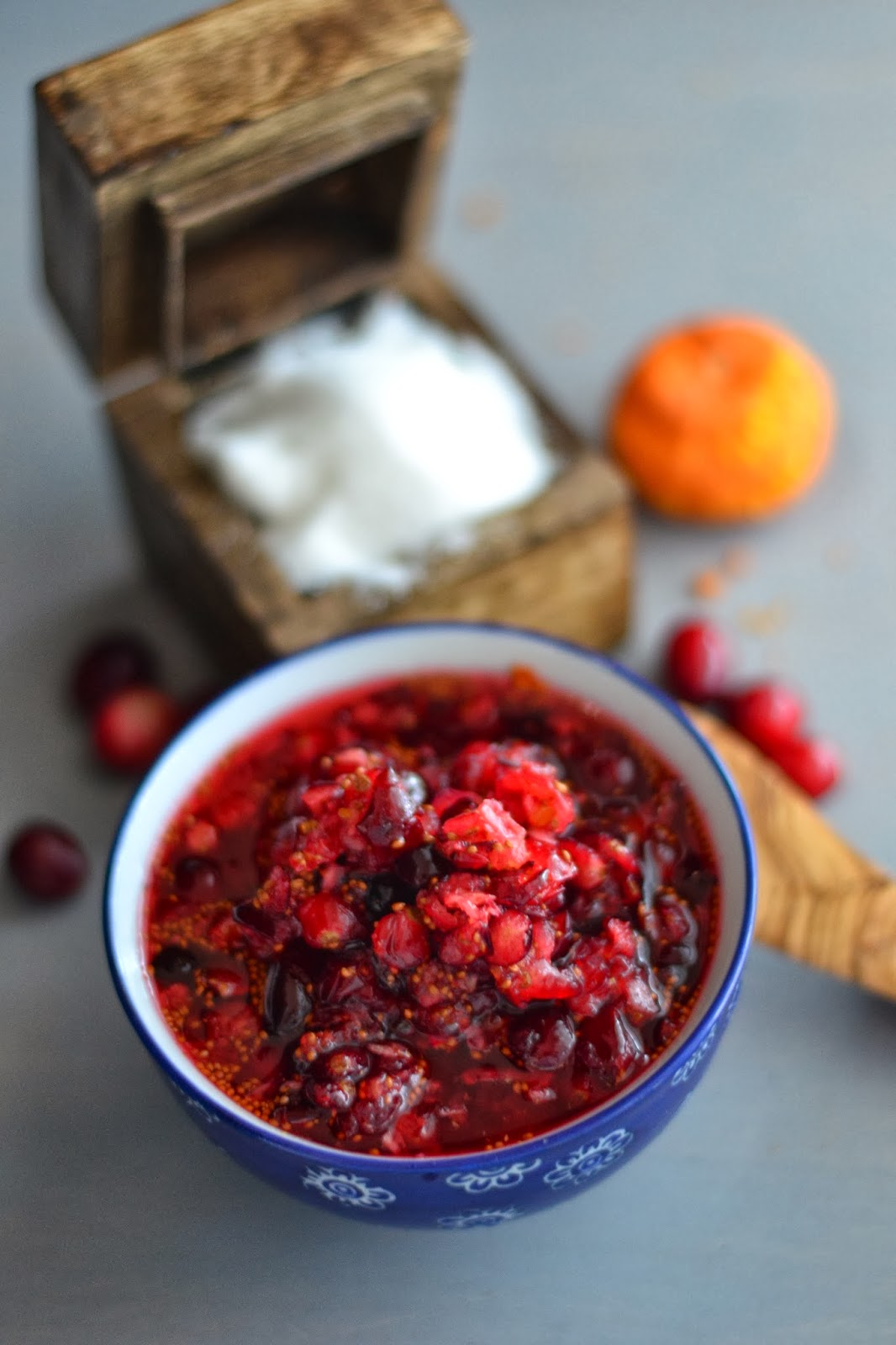 A tweak to the original recipe gave rise to this weeks post. A 'chunda' - a sweet & hot lip smacking relish that is native to the Western Indian state of Gujarat. The classic version is made with shredded raw mangoes that are set out to 'cook' under the hot summer sun to syrupy perfection. Well, considering the tiny detail that cranberries make their appearance only when the Sun's moved on down south and the relish is more likely to freeze than cook if placed outside, there was a bit of tweaking to be done. The end results nevertheless, were a success. 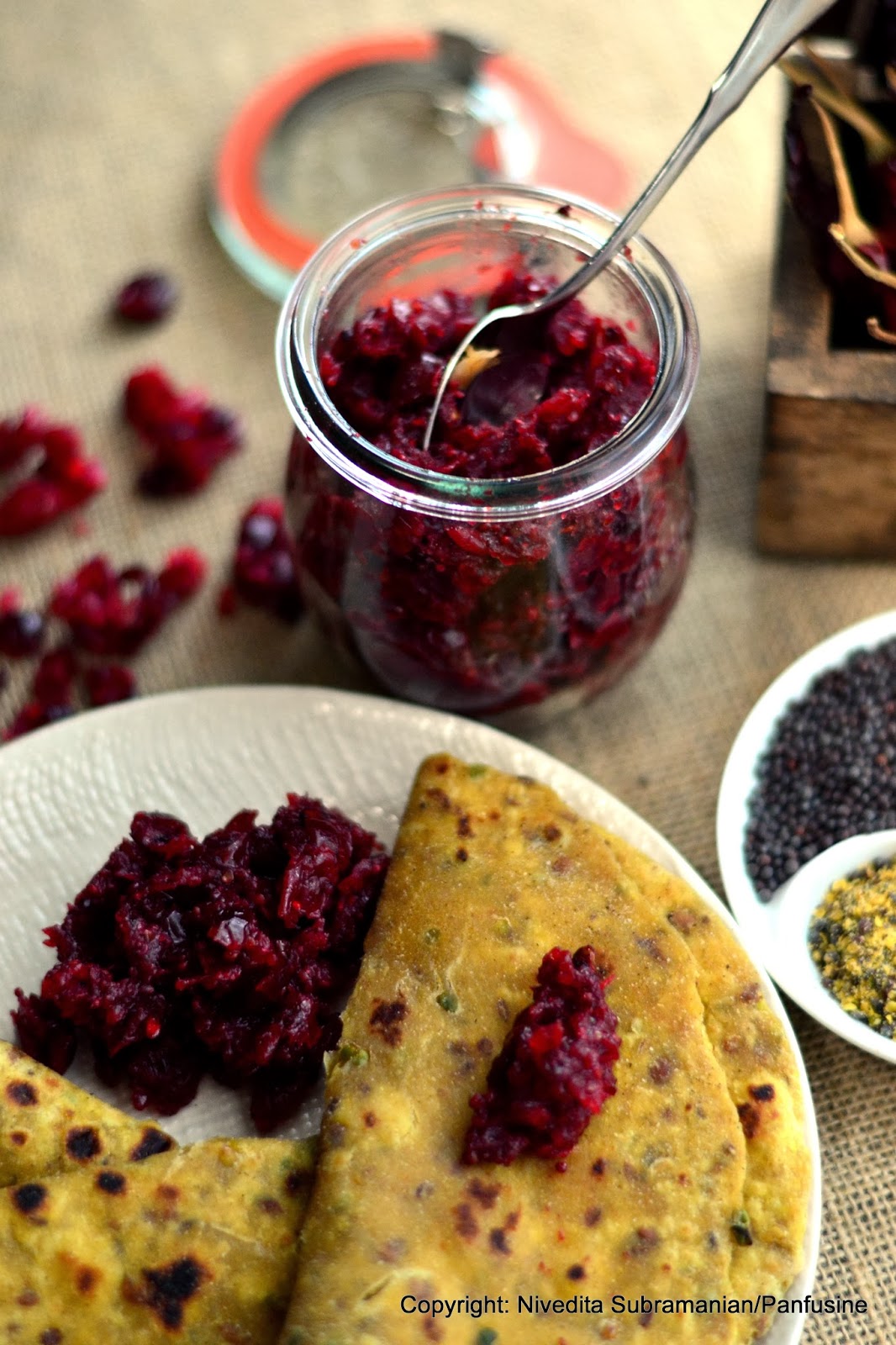 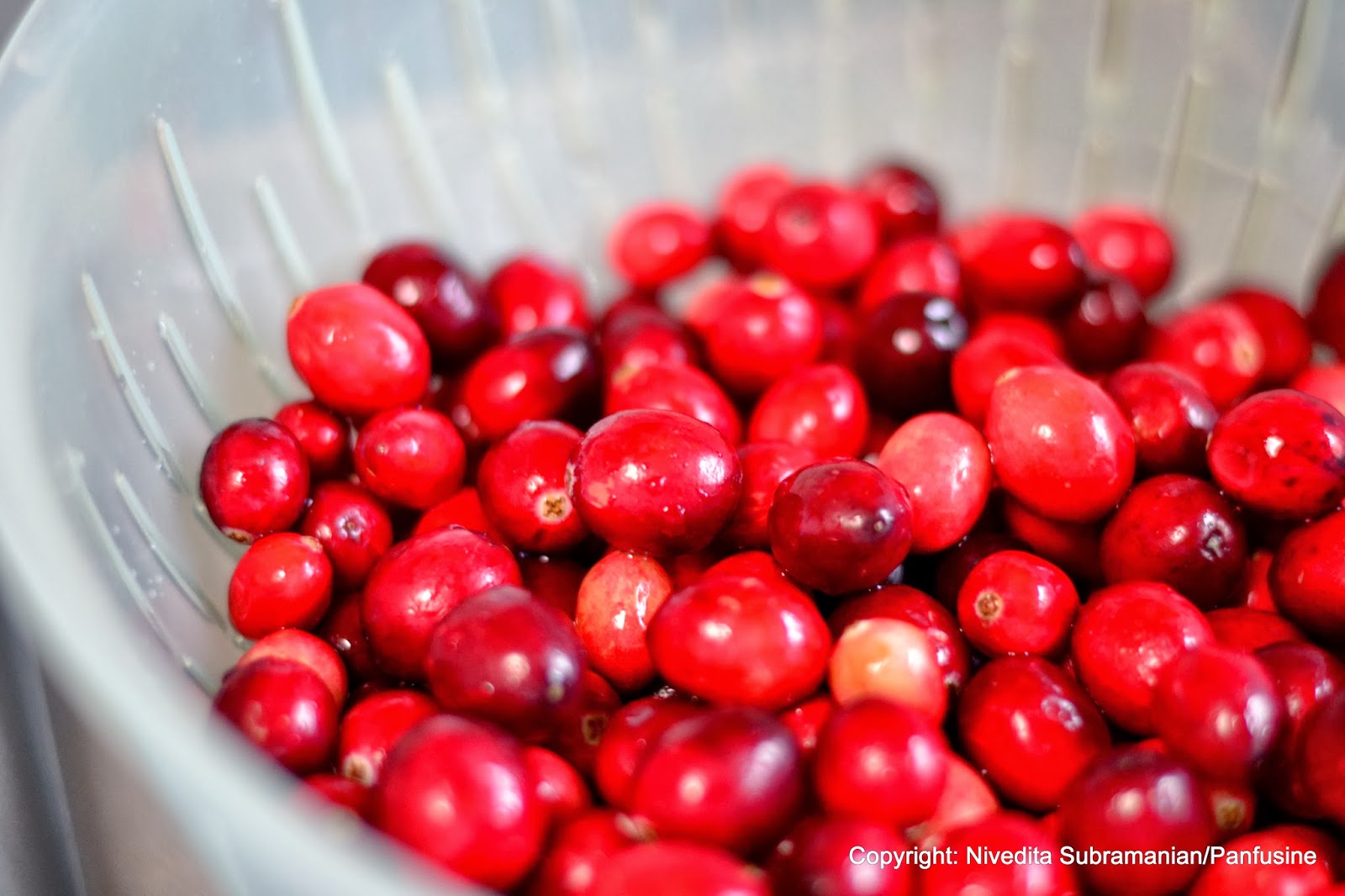 Add the cranberries, salt and the sugar into a Stand mixer  fitted with the paddle attachment. On the lowest speed setting, beat  the cranberries and sugar for one hour into a coarse sauce like consistency. This seems to help minimize that tannic characteristic of cranberries that manifest from its skin. 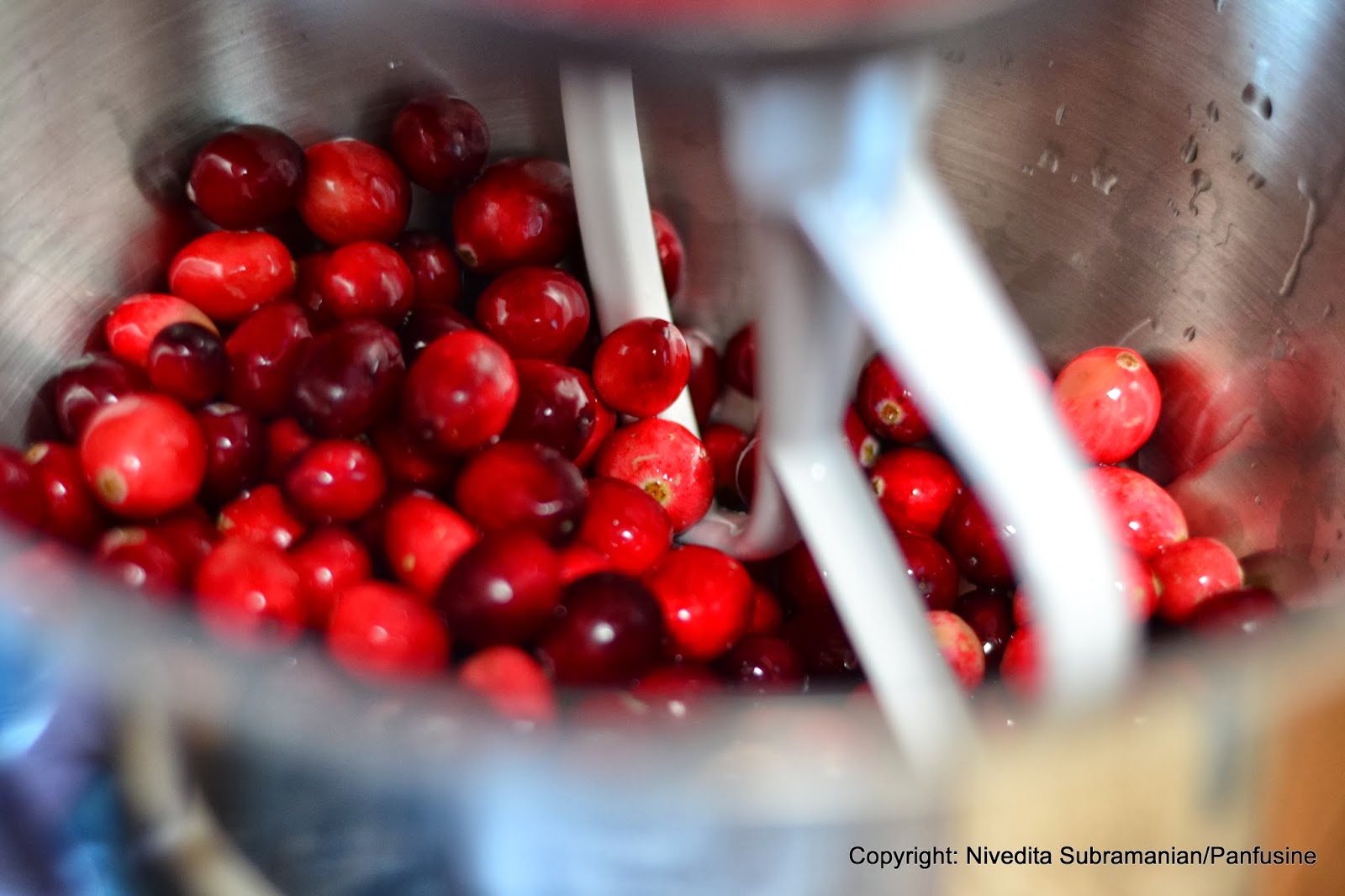 Transfer the cranberries in a heavy bottomed skillet and cook on a medium heat until the sugar begins bubbling (~ 7-10 minutes). Remove from heat and stir in the arbol chile powder (taste and adjust gradually instead of adding this all at once) and the powdered cumin powder. The crushed mustard adds an added kick of heat, but too much of it tends to confer a slight bitter after taste (probably due to the black outer skin of the seed). Allow to rest for a couple of days before using, so that the flavors get a chance to blend.

Cool & store in sterilized glass jars. This pickle will keep well under refrigeration for about a month.

Serve as a relish with traditional Gujarati breads like Theplas. 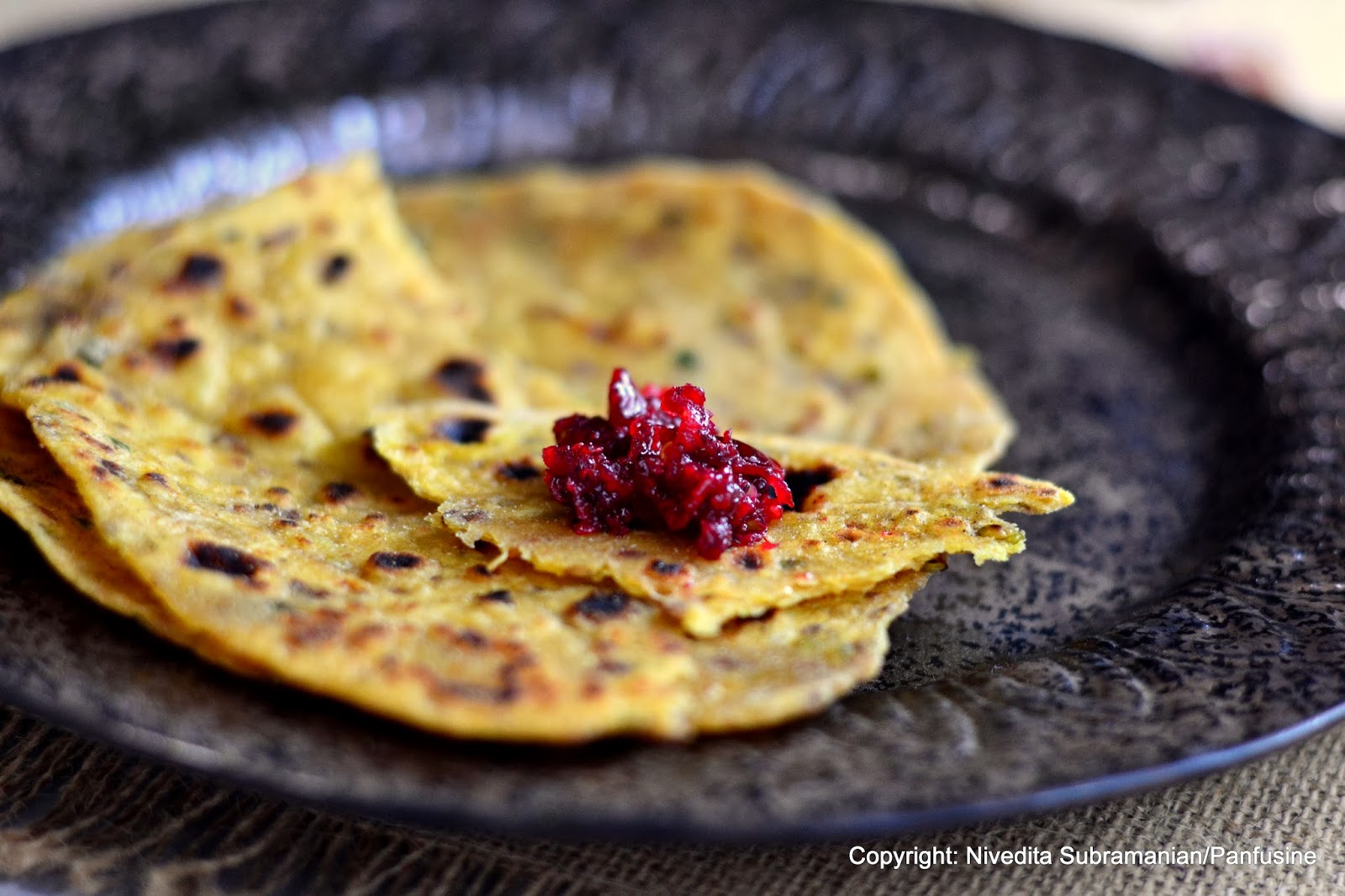