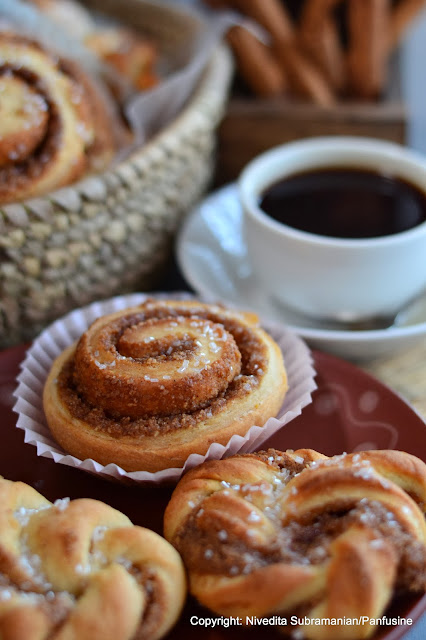 Time flies when you're having fun - so goes the saying. I never realized how relevant it would be to something so very different as this baking project that we started way back in January. Aparna Balasubramanian, the author of the blog 'My diverse kitchen' has led us through a fabulous journey through sweet and savory yeast  confections. It started out with the pull apart bread and wended its way through classic breads like Croissants to unusual cookies such as Torcettini de St. Vincent.

This years penultimate bread is the classic Swedish cinnamon bun, (yep, from the same set of those addictive treats you look forward to on a trip to Ikea). These buns are traditionally made on Oct. 4th to celebrate 'The day of the cinnamon bun' but then these are so addictive that they're available all year round in Swedish bakeries. The Swedish version is a lot less sticky and sweet compared to the American version. I tried both the traditional swirled version as well as the 'trouser twisted' version. Here's a You Tube video of the process:


Combine all the ingredients for the Starter into a sticky dough, in a large bowl. Place the Starter dough in an oiled bowl and loosely cover it and then refrigerate it overnight.  The dough will rise quite a bit so use a container that has enough room for this.

Allow the dough to rest on the counter for about 1/2 hour the next day before starting on the cinnamon buns. Sift the flour, salt and the powdered cardamom into a bowl.

Tear off chunks of the dough and add it incrementally into the bowl of the Stand mixer. keeping the machine running, gradually add the sifted flour mixture, Orange zest and the sugar and allow the ingredients to mix well.
Lastly add the softened butter and knead into a smooth dough thats stretchy. If the dough feels a bit dry, add a few teaspooons of milk. Conversely, add flour if the dough is sticky.

Make the filling by creaming together the soft butter, brown sugar, almond meal and cinnamon with a fork or spoon into a spreadable paste. 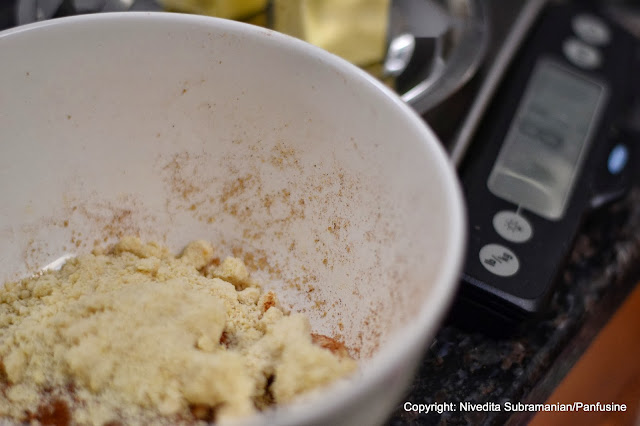 Turn the dough over onto a floured surface and roll it out into a  rectangle about 20” by 12” in size.

If you're making the spiral cinnamon rolls, spread the filling evenly over the whole rectangle 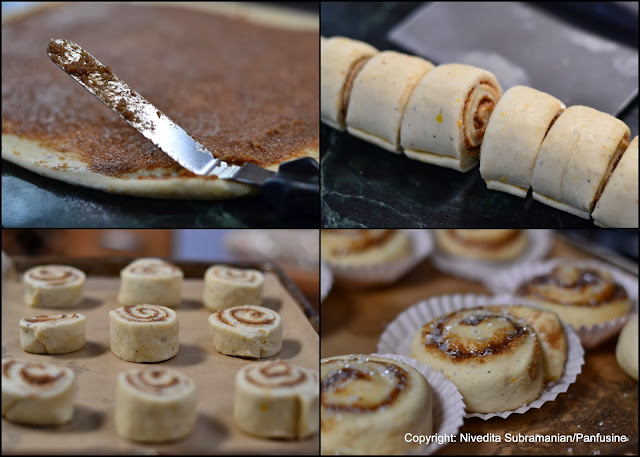 Roll the dough tightly in a jelly roll/Swiss roll style, gently pinching the edge to seal. Cut into 20 pieces using  a sharp knife and place them on a lined baking sheet (making sure to leave enough space in between), or on a cupcake case.

For the twisted version, spread the filling over  half the length of the dough as shown below. Fold over the half spread with filling and cut into 20 strips with a sharp knife. With each strip, cut a slit almost along the length such that the strip looks like a 'trouser'. 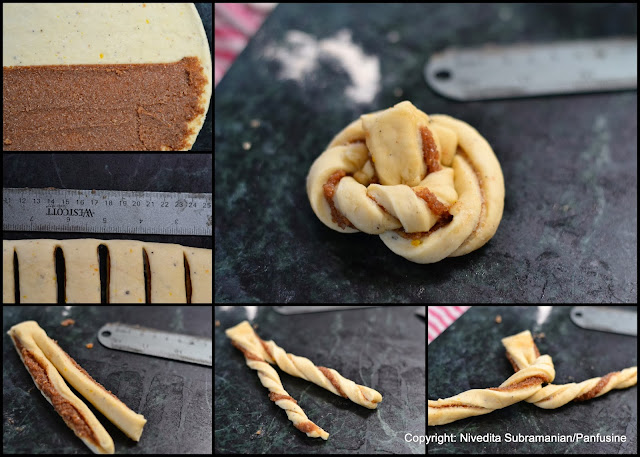 Twist each leg as shown above, cross the 'legs' over and press the ends together under the uncut part of the dough. As with the spiral rolls,  place the rolls in a lined baking sheet  or in cupcake cases with plenty of space in between.

Allow to rise for about 15 minutes (the buns will look a bit puffy, not fully risen), brush with milk and sprinkle pearl-ized sugar (or egg wash). Place in a preheated 400 F oven to bake for 15 minutes until they appear golden brown and sound hollow when tapped.  If they seem to be browning too quickly, turn down the heat to 375 F.

Turn out to cool on a wire rack. Serve warm or at room temperature with a hot cup of coffee. These Kannelbullar freeze well, so store the extra away for a rainy day. Just heat one or two in a microwave whenever the craving strikes. 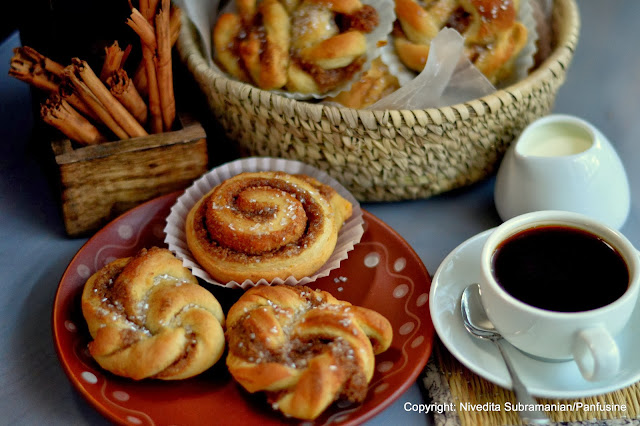