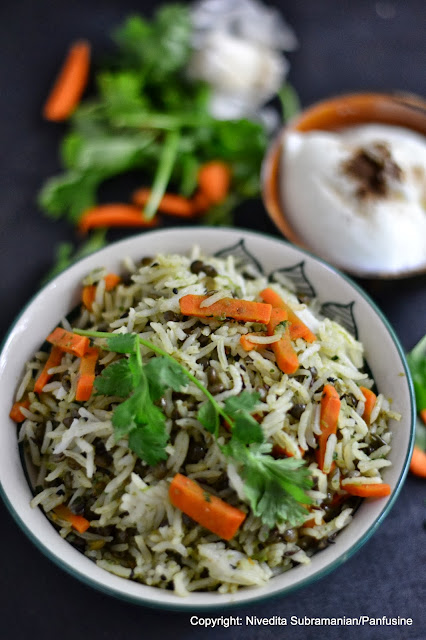 I hate negativity, I'd much rather spend my time in the Lab doing what I love best, running my experiments, taking measurements,  analyzing & visually recording  the results. Or, in blogger-speak, create a recipe, clear my kitchen counters,  prepare the dish, take photographs & then tuck into my creation. I'd rather not have written up my last post, my response to Martha Stewart, but there was something so smug about her tone in the interview, non verbal, that my pre-frontal cortex just had to sit back and support my lower brain in lashing out. It was not easy, for every 2 sentences I put down, I had to erase one. It was a learning experience, one that made me determined to never let my self imposed guard down when it came to to the quality of the recipes I post and never be stingy on listing references & inspiration, however insignificant or indirect.

Today's recipe was both an example of something hurriedly cobbled together into a one pot dish that had a healthy proportion of carbohydrates, protein & vegetables, as well as a dish inspired by someone else's recipe. The combination of herbs was the brainchild of Liz Larkin, a.k.a The scone lady. and it was for a recipe of Pan fried Fragrant Cauliflowers that I discovered on Food52. 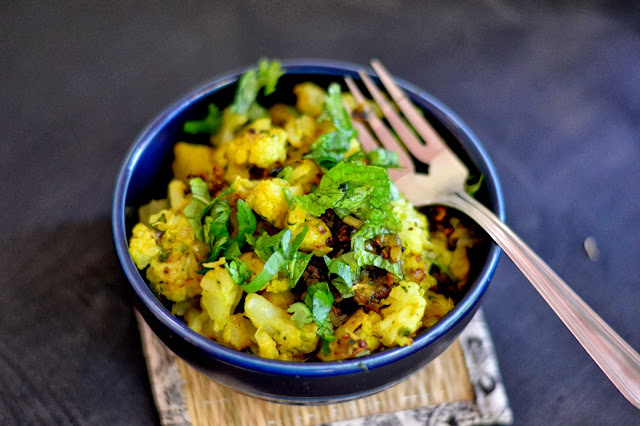 The flavoring from this 'masala paste' left such an imprint that it begged to be tried again, despite the obvious lack of a resident cauliflower, in fact, the lack of any other convenient vegetable, except for a bag of bunny food,viz carrots. Combined with some lentils (I have 1/2 a dozen varieties sitting in my pantry, neatly labeled) & cooked Basmati, The two dishes, compared side by side, have no relation to each other, and yet, the root flavoring is the same.

Since I had hurriedly cobbled up the first batch and the family polished off every morsel of it, I went back & recreated the dish before the combination of spices & tastes slipped out my my brain & food memory. The results were identical the second time around as well. the combination of lentils & rice is reminiscent of the Middle Eastern dish Mujaddara, accompaniment of choice for Mujaddara is yogurt, and the same works perfectly for the 'carrotty' version as well.

Rinse the lentils in plenty of water. add to a saucepan along with 2 cups of water, bring to a boil and allow the lentils to cook until soft, retaining their shapes and not mushy. Drain and set aside.

Rinse the Basmati rice until the water runs clear. In a heavy bottom pan, add 2 tablespoons of ghee, and 'toast' the rice until the grains begin to turn opaque. Add 1/2 teaspoon of salt along with 4 cups of boiling water. Stir to dislodge all the grains sticking to the bottom of the pan, cover and lower the heat to the lowest setting. allow the rice to cook until all the water is absorbed. Uncover, allow to cool slightly & fluff with a fork to separate the grains. 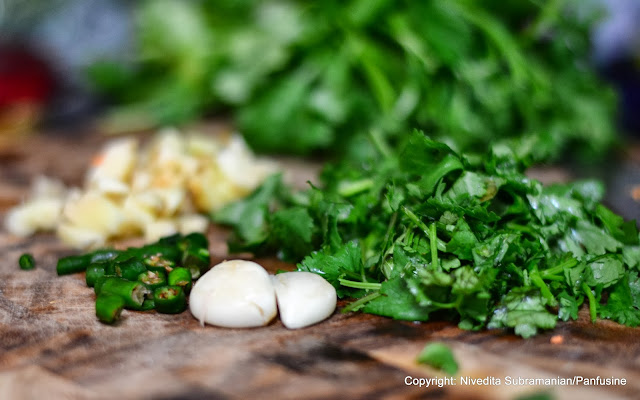 Combine the cilantro, serrano chile, garlic and ginger and blend to a paste.  I used a Mexican mortar & Pestle, the molcajete, just so that I could have some irregular texture in my blend. (plus there's something so relaxing in using manual tools, just builds a connection to your food.) 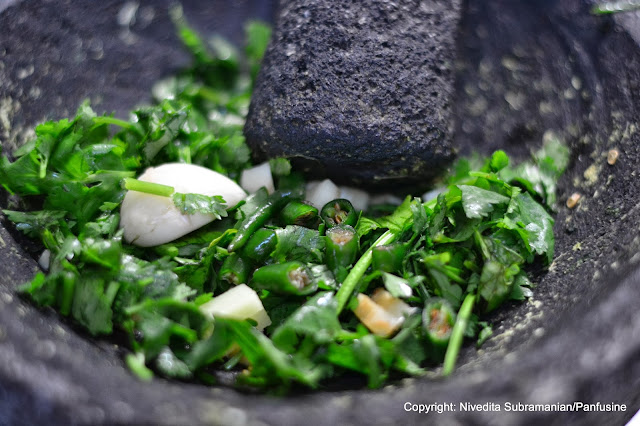 Slice the carrots into thick 'coins' at a diagonal angle. Then stack up 3-4 of these  coins and cut into little 'sticks. 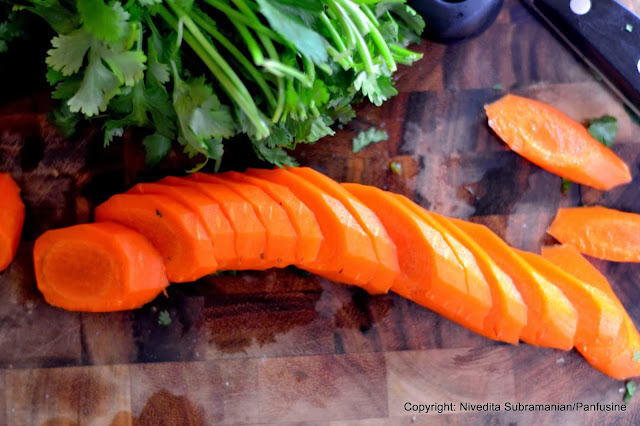 Heat the remaining ghee and the oil in a large skillet once the oil/ghee mix gets hot, add the nigella and fennel seeds along with the bay leaves. (No particular reason for adding these spices, Mrs. Larkins recipe doesn't use ANY spices for the cauliflower. I just happen to love the nigella fennel combination). Add the cilantro/chile/ /ginger/garlic paste to the tempering and fry until the paste begins emitting a divine aroma. Add the carrots and saute until the carrot softens slightly (they should still retain a 'crunch') and then toss in the  cooked lentils. 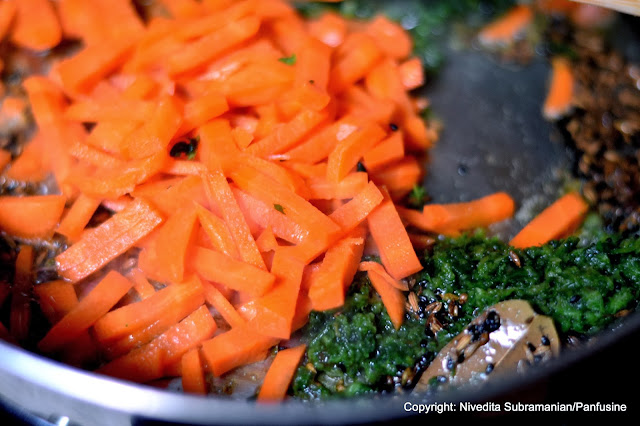 Season with salt (remember the Basmati already is salted, so adjust accordingly), allow any remaining moisture to dry up. 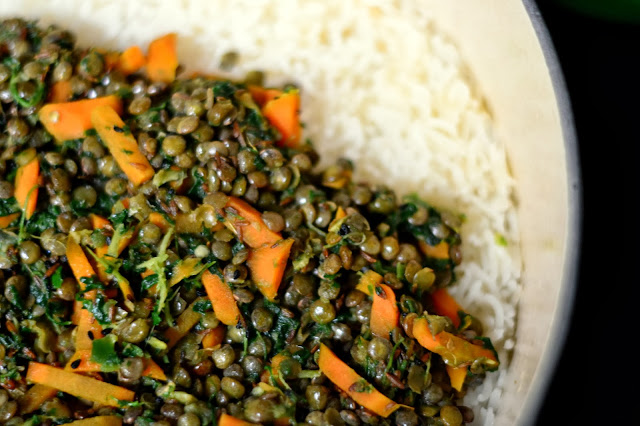 Add the lentil mixture to the rice and fold in until the carrots and lentils are evenly dispersed. Garnish with the remaining cilantro and serve warm. 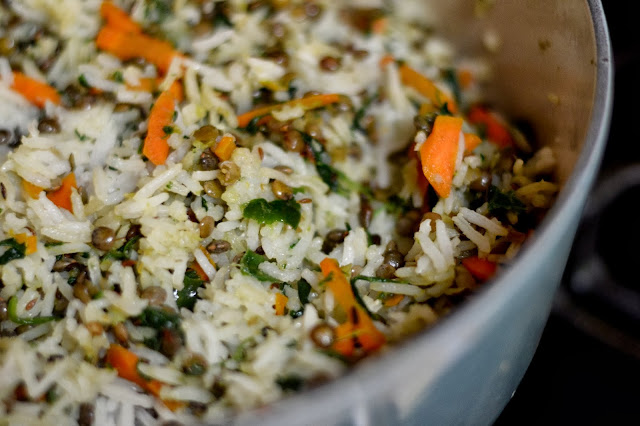 with a side of yogurt, Raita or Tzaziki. 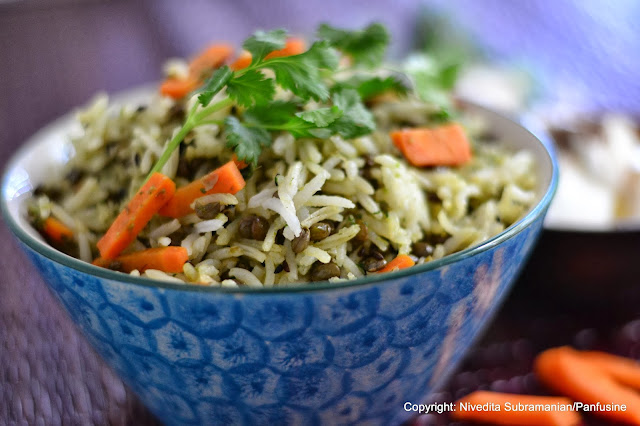