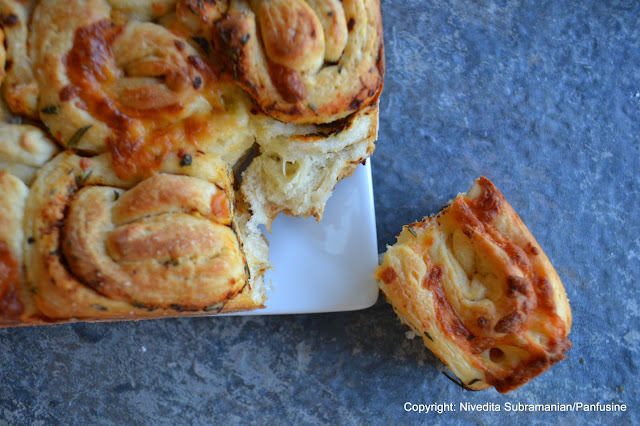 I had promised a carbo loaded treat in the midst of sensible healthy food, hadn't I?? As delicious as it was making these 3  treats featured today, no, I did not over indulge on them. One portion of each flavor leaving the rest to my 7 year old and my husband, who were quite happy polishing the the rest.

Pull apart bread , once you actively start looking for them, seem to come in all forms and  the best part is that they have the advantage of baking perfectly thanks to the rudimentary 'pre slicing' (if there indeed exists such a term) of the dough prior to proofing.

When the first attempt succeed beyond expectations .... 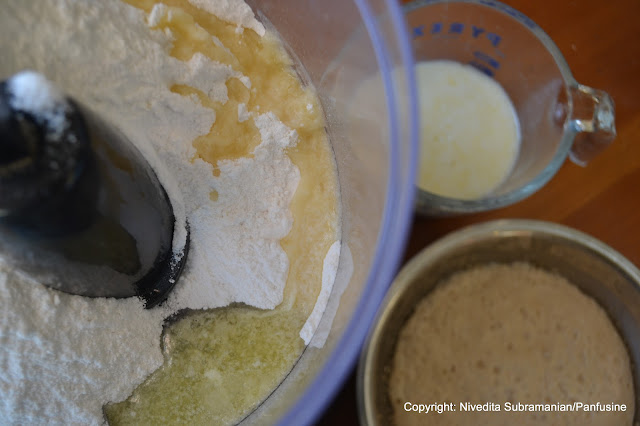 (well not exactly, I ended up setting a big bag of All purpose flour in front of me and went to cobble up the dough using rice flour, It made for a good enough photograph, but had to start all over again from scratch after cleaning out the food processor! and when the dough was ready, I realized that my only loaf pan was too small to fit the bread prior to the second proofing), I was obsessed enough to invest in a second loaf pan and make 2 more variations, so here they are all three loaves / rolls, using Aparna's prescribed recipe with flavor variations thrown in! I'm linking this post to Aparna's blog post on the theme as well as to Yeastspotting. 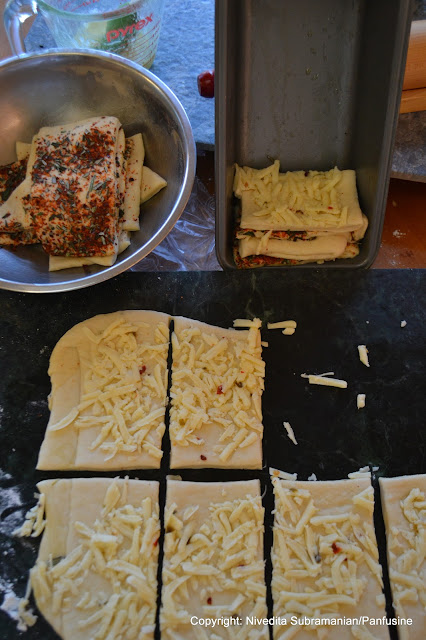 5. Stack the strips in an alternating sequence in Large loaf pan . I had to make hasty changes when  I   realized that mine was too small to fit the dough. 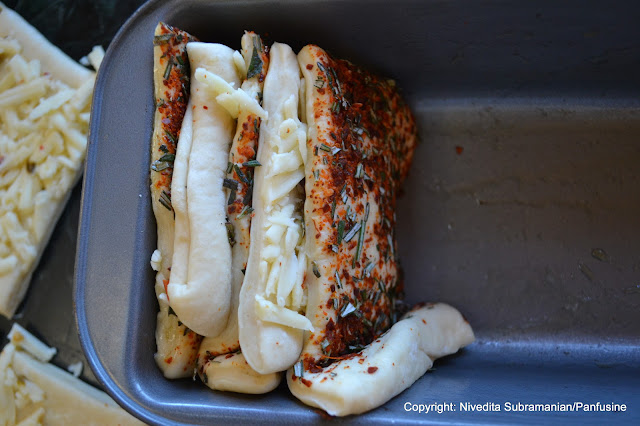 6. Fold each rectangle of dough longitudinally, press together lightly and roll it up as shown below. 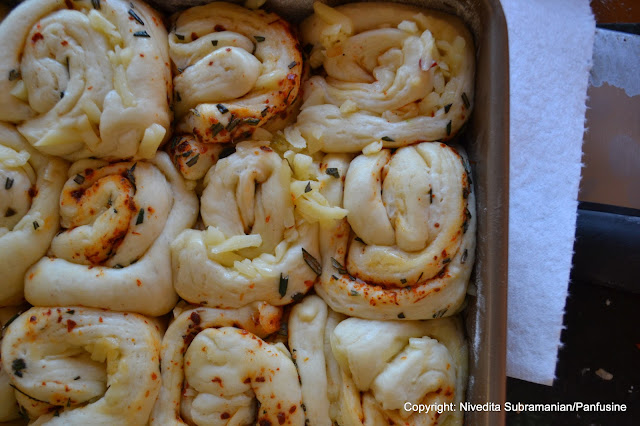 7. Stack each roll in an alternating sequence in a 9 inch square baking pan that has been buttered and floured.
8. Brush with milk, cover and allow the  dough to proof a second time or about 1.5  hours.
9. Preheat oven to 350 F. Bake the dough for about 35 - 40 minutes until the top is golden brown. 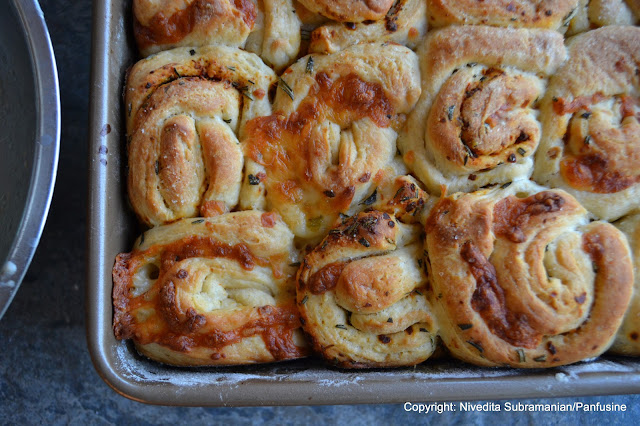 Allow to cool on a rack and serve fresh with a bowl of your favorite soup!. 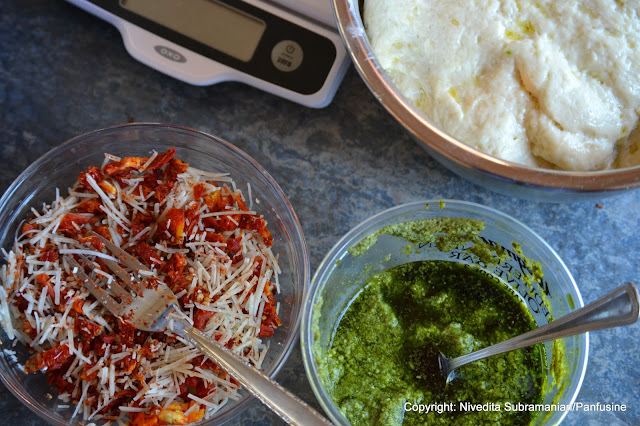 Use Olive oil instead of butter in the dough. 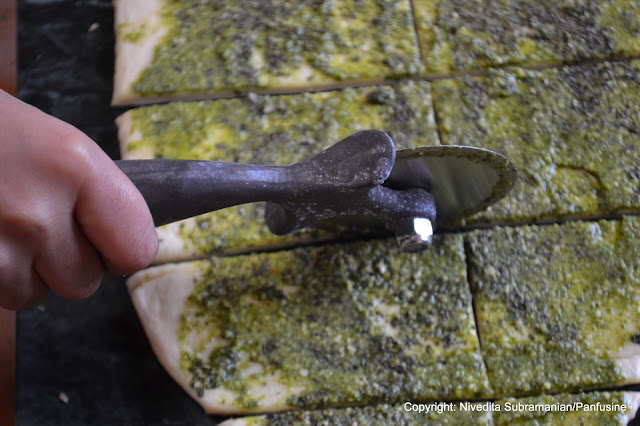 Since the Parmesan cheese tends to be 'drier' as compared to a softer cheese, make sure that you liberally drilled EVOO when layering the sun dried tomatoes.
Using two medium sized loaf tins stack up the pieces of dough, (8 slices to a loaf pan) and continue with steps 8 & 9. 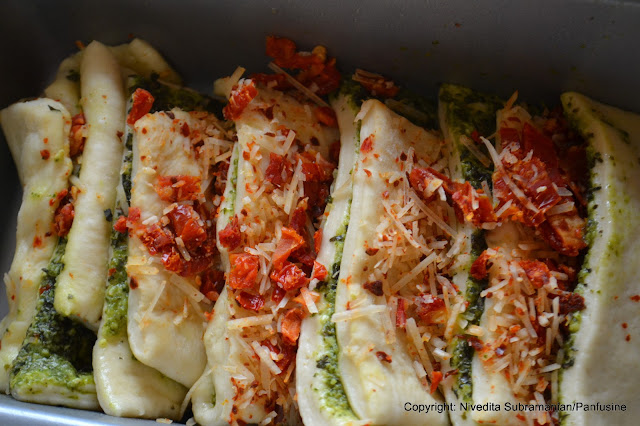 In retrospect, Irealized that it was not a good idea to sprinkle the excess sundried tomato over the loaf since they tended to char while baking. In fact, if possible, pick out the  stray pieces that stubbornly stick to the surface. 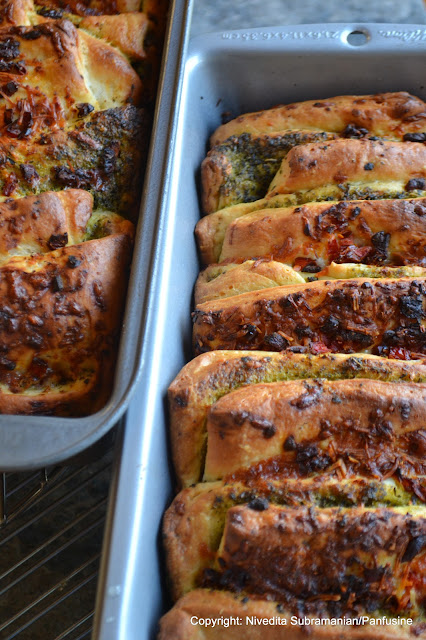 The third version I made was a sweet one with a chocolate cinnamon  and marmalade filling.

First, NO GARLIC in the dough. I doubled the amount of butter  (to ensure a 'softer' baked texture) and added 1/4 cup extra of sugar with a teaspoon of vanilla extract in the dough. For the layering, the order is 1. Liberal brushing of melted buttter followed by spreading the warm, melted marmalade and then lastly liberally dusting a mix of cinnamon, cocoa and sugar (as per your taste). 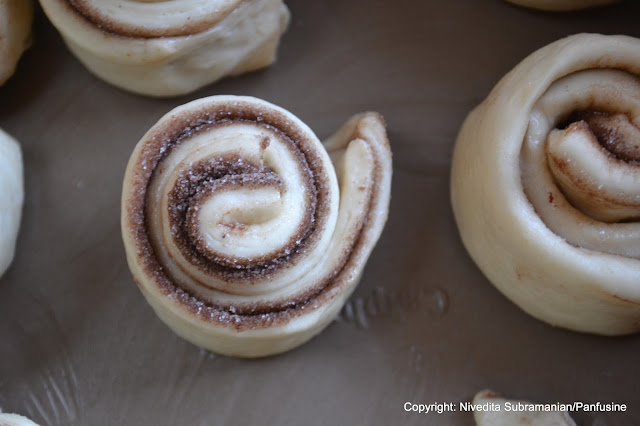 Its perfect with a hot cup of coffee! 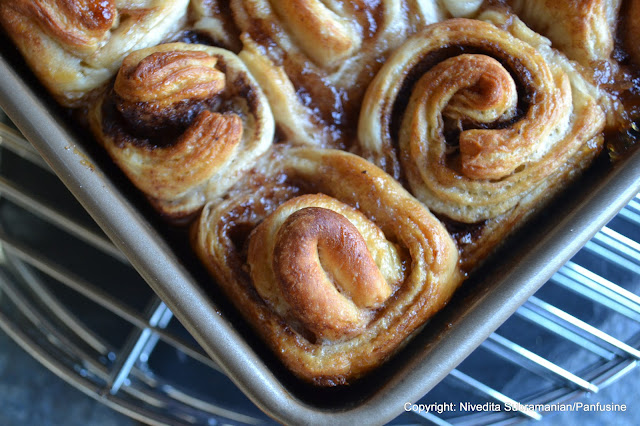 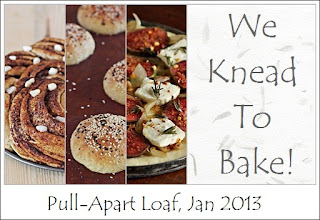