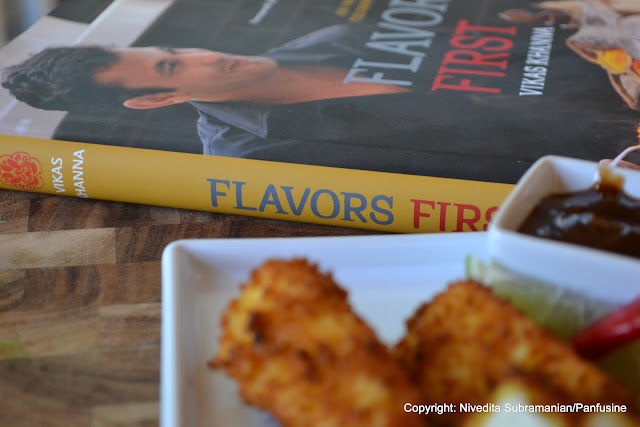 I'm going through one of those phases where I have a million ideas for recipes buzzing in my head,
and in a contradictory way, that IS the problem ,since I'm at a loss to decide on what to make, when to make it and trying to figure out what it was about the set of ingredients that drew me to it in the first place. ..Net result.. Bury myself browsing through the Internet searching away,  for something I cannot even  quite define. Simply had to take a week's  break to get back into a routine.

Maybe its the experience that comes with time, or simply the familiarity of browsing through cookbooks on a regular basis, or simply maybe I'm looking for a  spectacular AHA moment from a book written by a celebrity chef..I couldn't quite figure out what it is that I sought from Chef Vikas Khanna's latest cookbook 'Flavors First'.

Chef Khanna is a household name in Indian culinary circles due to his heavy involvement with the Indian version of Master Chef. The executive chef of a Michelin star restaurant in New York
Junoon, he was most recently named as GQ (India)'s Chef of the year. But contrary to the high
profile image, Chef Khanna maintains  an extremely approachable friendly personality, the quintessential gregarious hospitable Punjabi. (Incidentally, he is  a native of Amritsar). This is the overall aura conveyed in the book, a glamorous high profile set of elegant recipes with an all round comforting set of flavors one associates with home food. 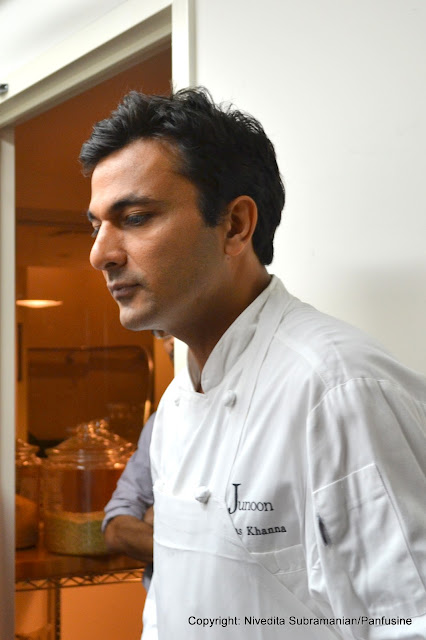 Don't let the slim spine of the book deceive you. Its chock full of recipes divided into 12 sections, from condiments to drinks with equal number of vegetarian recipes as meat, fish & poultry. The recipes area mix of modern eclectic fare you would probably encounter at a high end Indian restaurant  (The current menu offering at Junoon has none of the recipes from the book.. just checked!) with a liberal mix of homestyle Indian fare like Gujrati Kadi & Punjabi Choley. In the context of home style dishes, as a native South Indian, I personally was a trifle annoyed at seeing a recipe for 'Dosai' being incorrectly referred to as a 'Chawal' ki roti. If you're looking for a cookbook that focuses on predominatly Indian dishes, .. look elsewhere.

Chef Khanna  reaches out beyond his traditional roots to embrace ingredients from around the world and beautifully integrate them into elegant offerings that retain a hint, just a hint  of Indian-ness in them. And in doing so, lowers that stratospheric bar that a lot of non- Indian home cooks fear when faced with the prospect of cooking Indian food. In between the recipes, are small, one page sequential anecdotes from Chef Khanna's  life as a kid growing up in Punjab, learning the fundamentals of cooking from his doting grandmother 'Biji' to his metamorphosis as one of the worlds top chefs (and a film maker) with a passion for giving back to the community that nurtured him. I look forward to sitting down someday and watching his series 'Holy Kitchens' that explores the intrinsic relationship between food and the worlds greatest religions.

I personally tested two recipes from the book, the Punjabi Choley ( which I usually make regularly with my eyes practically closed) and the Forbidden rice pulao with green peas ( which was easy enough but an ingredient I had never tried working with before). The Punjabi Choley was spot on in terms of flavors, aroma & visual appeal. The Forbidden rice recipe (followed to a T as per the instructions in the book)  yielded a flavorful balanced dish except it was a uniform unappetizing JET BLACK in color, ( it may be  great for one of those 'Dining in the dark' experiences, but visually a no no). I went ahead and adopted my personal time tested method for the the pulao the second time around, and it worked like a charm. 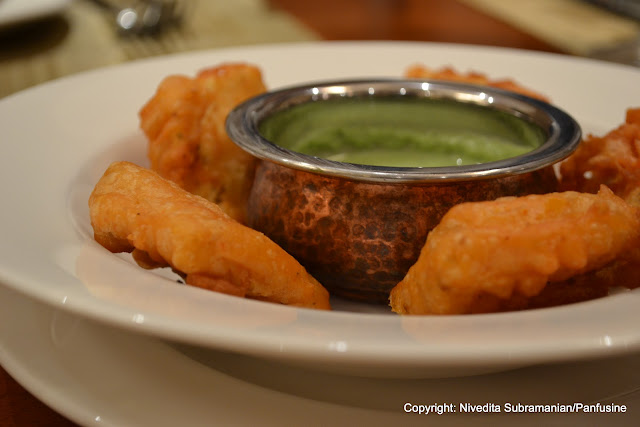 For other recipes based on the dishes served up at Junoon, one of them being the divine Paneer Pakoras, here's a link to a recipe for making the  Spiced Paneer and the consequent Paneer Pakoras. 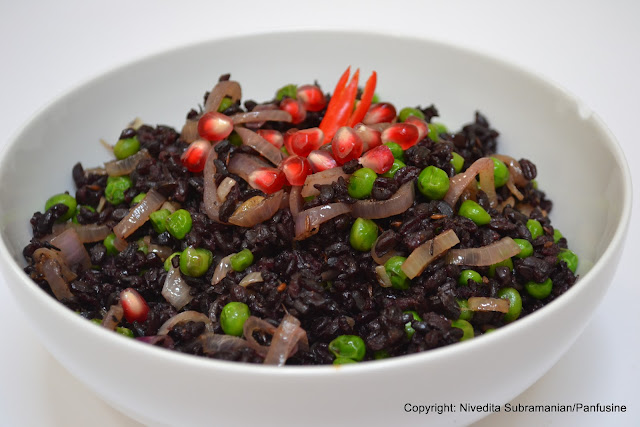 (The Ingredients  are exactly as in the book, The technique given below is my tweaked version)

Rinse the rice  with plenty of water to remove any excess starch. Soak the rice in cold water for about 15 minutes. Drain the water. Toast the rice gently in a skillet with about 1 tablespoon of oil for a minute. Transfer to a microwave safe bowl, add 3 cups of water or vegetable stock and cook the rice for  20 minutes in the microwave (until the water/stock is all absorbed). Allow to cool slightly, transfer to a large mixing bowl & fluff.

Heat the remaining oil in a large skillet. Add the Cumin , black cumin seeds, onion, bay leaf and garlic. Saute, stirring constantly until the onions turn translucent (About 5 minutes) Add the peas, salt, pepper and garam masala, cover and allow to cook on medium low heat until the peas soften. Add the cooked forbidden rice, and fold gently to combine all the ingredients. Adjust for seasoning, sprinkle some water, cover and allow to cook for 5 minutes on a low heat (allowing for the flavors to infuse into the rice. Transfer to a serving dish, discard the bay leaf and serve warm with a side of Raita. 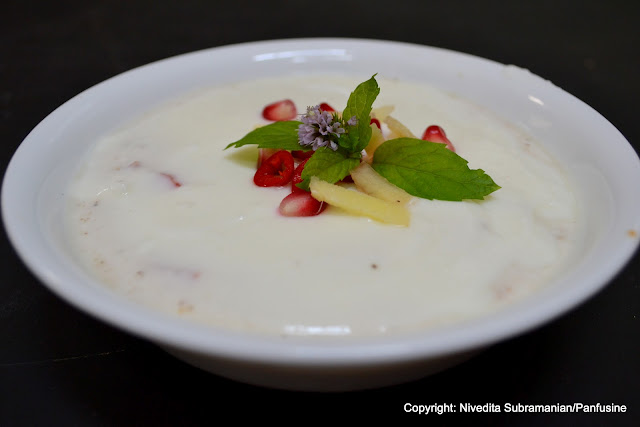 'Flavors First' is published by Lake Isle Press and available online from Amazon.com,  Barnes and Noble and other book stores. 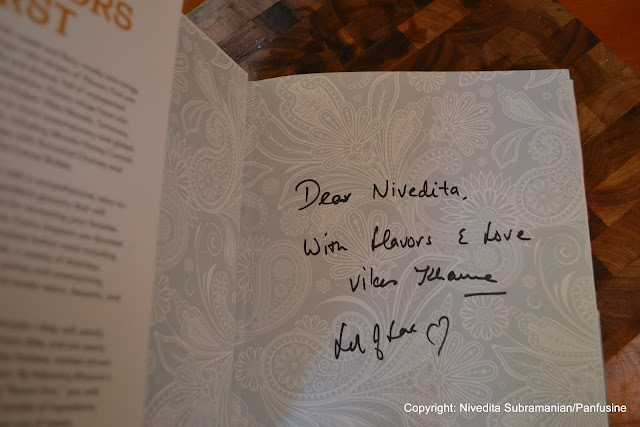 I'm sure you'll enjoy using this cook book as much as I do!
Happy Cooking & Bon Appetit!