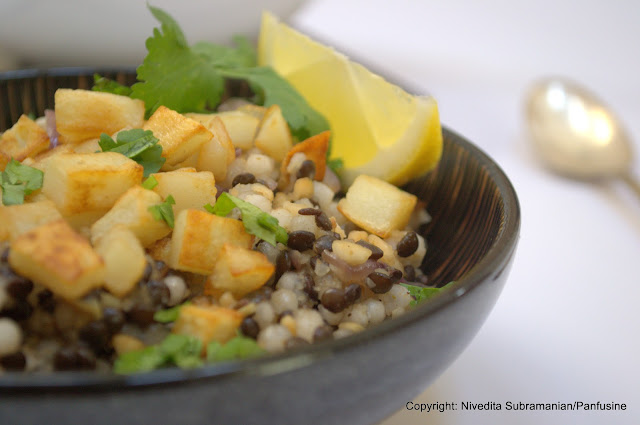 Thursdays were considered a 'fast' day in a lot of households in my neighborhood in Chembur, a suburb of Mumbai. With that typical ignorant cynicism that only a teenager can excel at, I often used to wonder why they called it a fast if they ate such 'filling' stuff like 'sabudana' khichdi. This truly was a dish that sank like a stone down your stomach & stayed there for the next 12 hours slowly digesting. One possibly could not contemplate eating a bite more after a generous portion of this absolutely delicious comfort food.
Well, decades later, I have still yet to figure out an answer (not really, since this is the wikipedia era and almost any answer can be found there!), some traditions are just too sacred & beyond questioning, and if the associated food is delicious, then just sit back & enjoy the food.

Sago pearls (often referred to as tapioca pearls, although the latter is derived from the roots of the cassava plant) are manufactured from the starch extracted from the pith of the sago palm, a native of south east Asia & New Guinea. 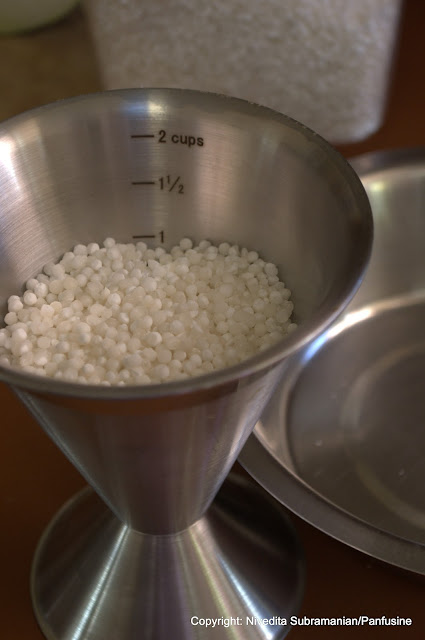 Sabudana (as sago is referred to in several Indian languages) Khichdi is a classic breakfast dish ( or lunch, or dinner or an in between light meal, if you're like me) from the western Indian state of Maharashtra. Its a textural & flavor treat, considering sago by it self is nothing more than a flavorful pearl of gelled up starch. The cilantro, cumin & toasted peanuts and the tang of citrussy lemon juice make this a dish to die for. The cons - sago tends to clump up thanks to its gel quality & this makes the khichdi less than appealing in terms of left overs. the trick is to introduce non gelling ingredients as 'nearest neighbor' candidates to the sago pearls. not many candidates that would fit the bill in terms of similar size.

The answer: Beluga Lentils, ( Whole Foods sells organic beluga lentils under their 365 label) at first glance, they kind of resemble black mustard seeds on steroids. they're in fact the tiniest variety of lentils (of the 'masoor' family). Jet black in color, they turn a deep glistening dark  brown when cooked (resembling beluga caviar, hence the name). They hold their shape very well when cooked. and NO, they are NOT to be confused with whole urad dal (which is related to the mung bean rather than masoor). 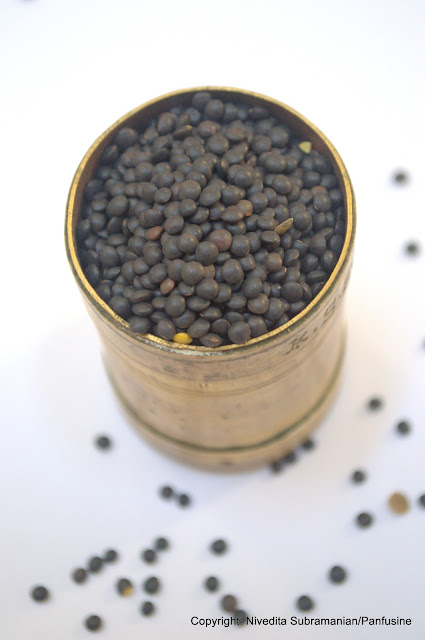 This gorgeous variety of lentil was the perfect addition to sago to make a  healthy protein rich version of the sabudana khichdi. (the traditional version incorporates peanuts for the purpose, but not really enough to call this a protein rich dish, it still remains carb heavy). The best part I realized, was that the presence of the lentils interspersed between the sago pearls keeps the final dish from clumping and it tastes great when re heated & served as left overs. I like to add a pinch of Goda Masala to invoke the traditional Maharashtrian flavors, but unfortunately, I did not have any more of this magic potion when testing this recipe. Had to make do with a garam masala substitute :-(

Rinse the Sago pearls in plenty of warm water to get rid of excess starch. Cover the wet pearls (drain off any excess water) and allow to 'bloom' for about 2 hours. 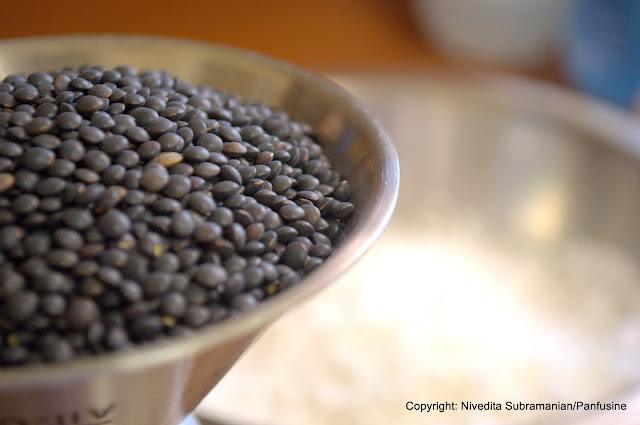 Bring 1/5 cups of water to a boil in a saucepan. Wash the Beluga lentils and add to the water. Lower heat, cover and cook for about 15-20 minutes. Drain the residual water & reserve about 2/3 cup of the cooked lentils. (you want an optimal blend of the black & white and equal proportion of the sago & lentils does not exactly work too well) 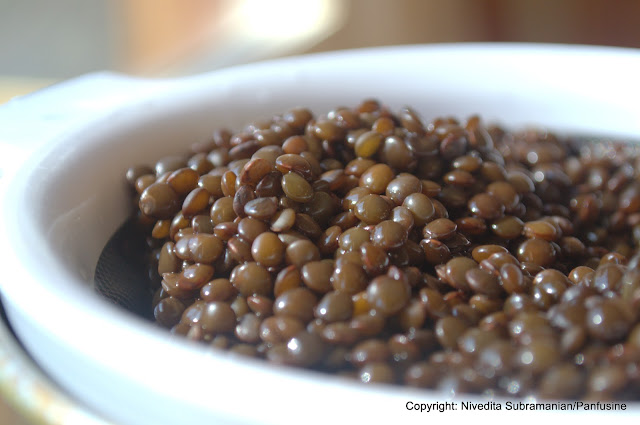 Rinse and pat dry the diced potatoes . Heat 3 tablespoons of oil in a non stick skillet and add the potatoes. Allow to fry to a golden color, tossing them to evenly cook. remove onto kitchen towels & sprinkle with a pinch of salt. 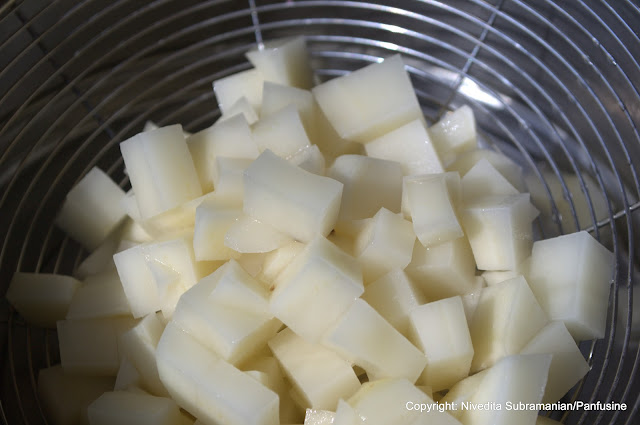 In a large skillet, heat the remaining oil, when it just starts to smoke, add the cumin and allow it to sputter & split. Add the curry leaves, ginger & green chili. 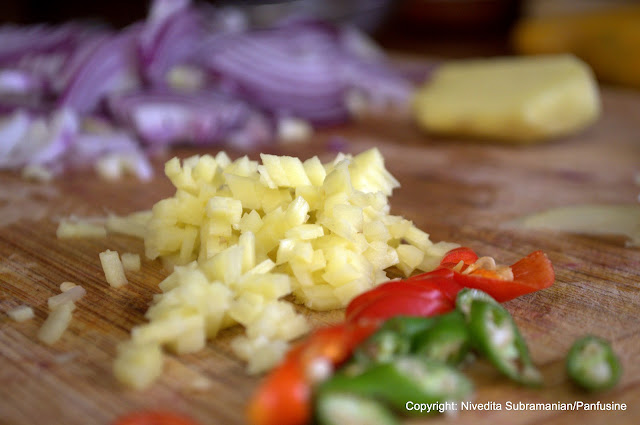 Stir to combine and then add the onions. Fry the onions until they turn translucent. Add the garam masala and salt. Mix well to combine. Add the Sago and the beluga lentils along with the potatoes & crushed peanuts. stir well to disperse all the ingredients evenly. Sprinkle water generously over the mixture, lower the heat and cover. Cook for about 7-10 minutes till the flavors combine well.

Once the pearls turn into translucent beads, drizzle with the lemon juice.  Transfer the khichdi onto a serving dish, and garnish with the chopped cilantro. Serve warm. 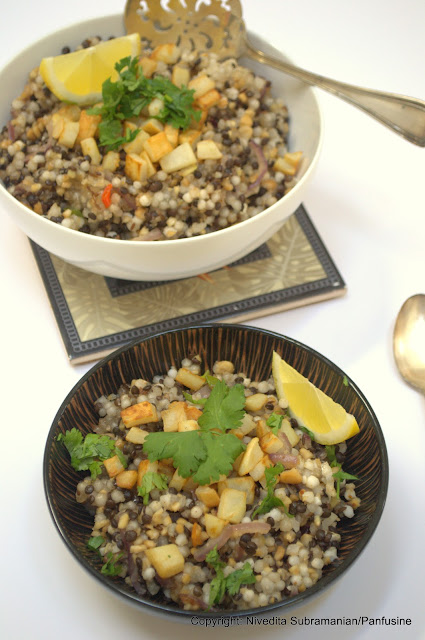