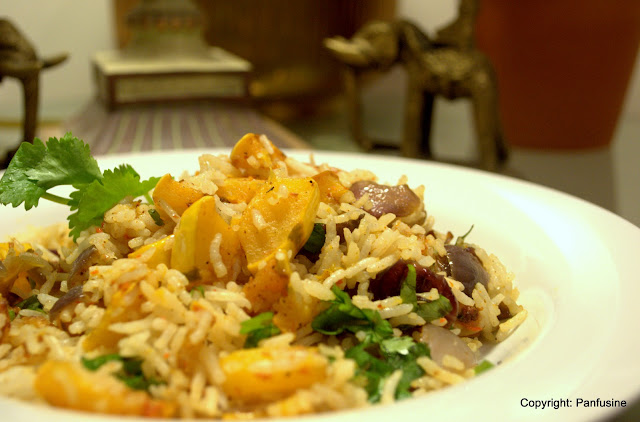 'The Turmeric Trail' by Raghavan Iyer is one cook book I'd love to get my hands on. except, its no longer in print & the only available copies are sold online at black market rates, which I will not pay(its not the price, its the principle!). But the title endures, in another avatar, as the brand name for a set of spices launched last month.

Turmeric Trail is the brainchild of Chef Raghavan Iyer and focuses on 4 spices representing 4 distinct regions of India. Garam Masala, the predominant spice blend used in the Northern states,  Madras Masala, A heady mix of toasted split  dal & spices, thats a mainstay of the signature South Indian stew 'Sambhar', Mumbai Masala, a vibrant mix with dried coconut & sesame, and Chai Masala, a blend of 5 spices, with a potential to sizzle up 50 different dishes, from tea, to hot chocolate to cookies. They're packaged beautifully in natural looking brown boxes tied  with raffia grass and it is quite understandable if you want to keep the USPS package carton, it smells divine even after you've removed the contents!

I ordered the Mumbai masala & the Chai masala  since I make my own blend of Sambhar powder (I can almost imagine my late mother scolding me if I were to even contemplate using a commercial variety, This is one spice blend which I can't ever imagine using anything else other than my mothers recipe, no offense meant! ). As for the Garam Masala, I'm still working my way through the William Sonoma jar that Monica Bhide had sent me as part of the prize package for winning  the spicy cocktail contest. I'm not for keeping large quantities of ground spices around, they tend to  have a finite half life.

The Mumbai Masala, you simply HAVE to try this. In addition to adding it traditional curries & stews, it makes for a great marinade seasoning for roasted squash, which I combined with plain basmati rice for a flavorful one pot meal. The Chai Masala, (of course I would not be blogging about it if I just made myself a cuppa tea).. a teaspoon of this went into a spiced shortbread which pairs wonderfully with a warm mug of ...Cafe au lait.

To order your set of spices, simply follow this link.

Delicata squash is a winter variety of squash, unique in the sense that it has  a thin & perfectly edible skin (in contrast to other squashes such as the butter nut which require the use use of a cleaver to peel them!). When roasted or baked, the flesh is very sweet, almost raisin 'ish'. I believe it's also known as 'sweet potato' squash for this reason. 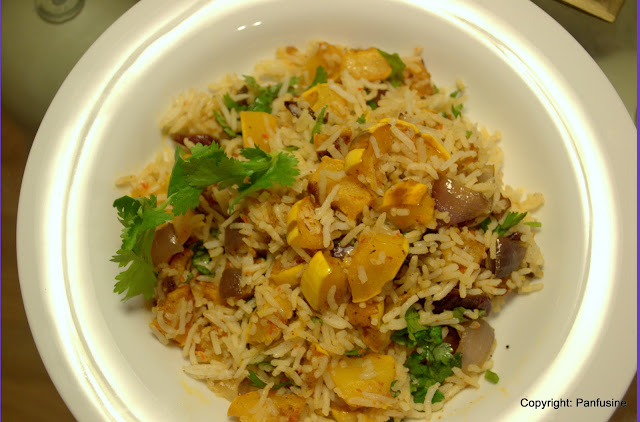 Preheat oven to 425 F.
Cut the squash, remove the inner webbing and the seeds. Cut into 1/4 inch thick rings & then cut each ring into quarters. Cut the onions to a similar size. 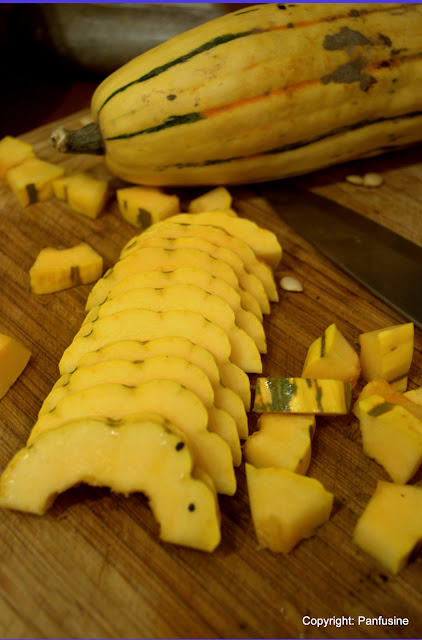 Combine the vegetables in a large mixing bowl, along with the oil, salt and the Mumbai masala. toss & allow to rest for about 15-20 minutes. 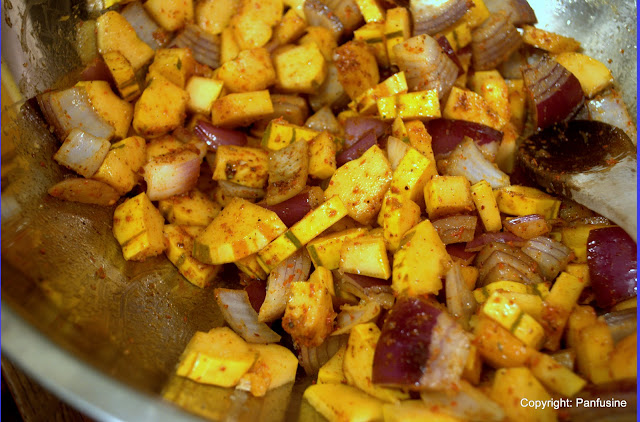 Arrange in a single layer on a baking sheet lined with Aluminum foil. Place into oven & allow to roast for about 25 - 30 minutes, or until the squash turns golden with tiny brown spots and yields completely when pierced with a knife. Remove from the oven & allow to cool. 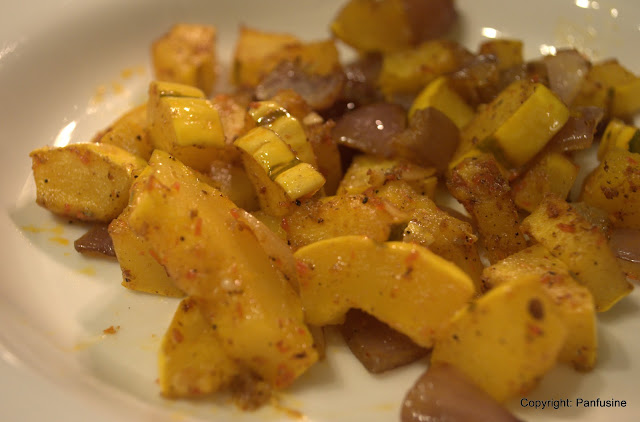 Return to the mixing bowl along with the cooked Basmati rice and the lime juice. Fold the rice into the roasted vegetables, taking care not to break the grains of cooked rice. Serve with a side of Raita. Preheat oven to 325 F. Line a  baking sheet with Parchment paper.
Toast the shredded coconut until it turns a light reddish brown color and starts emitting a 'coconutty' aroma. 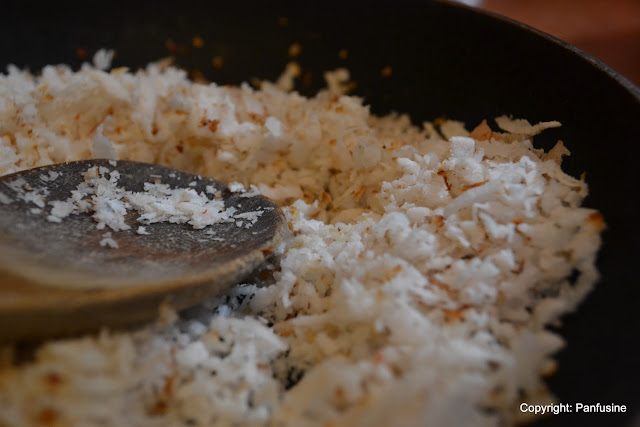 Set aside to cool, and combine with the toasted sesame seeds. Add these to the flour and combine to disperse the sesame & coconut uniformly.
Cream the sugar & butter till light & fluffy, Add the Chai Masala and combine well.
Add the flour mixture to the creamed butter and work into a ball of dough, just until it all comes together. Wrap in a plastic wrap & refrigerate for ~ 1 hr
Remove the dough and roll it into a 1/4 in thick sheet.


Using either a pastry wheel or a cookie cutter, cut out shapes and place on the parchment paper lined baking sheets.

Bake for about 12-14 minutes till the edges begin to appear brown. Remove from the oven & allow to cool completely on a cooling rack. Store in an airtight container. 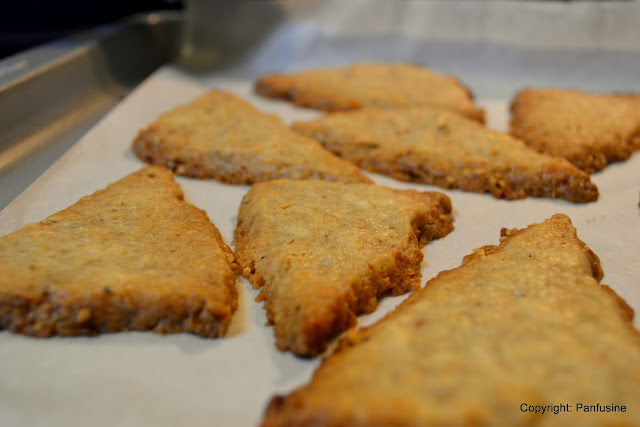