This exercise may remind you of that memorable scene from the  movie 'A time to Kill' but bear with me..
Close your eyes & picture yourself as a child visiting a friends house for tea. Try to think of something that your friends mom served that was so delicious & mouthwatering, something you never had at home. A  taste so unforgettable, you longed for the time you could enjoy that treat again.. just let yourself swim in those memories....' SNAP OUT OF IT'!

Question:  During this self imposed daydream, did it ever matter to you which part of the country your friend was from? Did you care if the food served was Tamil, or Gujrati, or Bengali or....? (applies to readers who grew up in India) All that stood out was that it was unforgettably delicious. At that moment of time, the food being analyzed by your taste buds & nose was for all practical purposes, just Indian.

Even as we chafe under the (partially true) global perception that Indian food is primarily of Punjabi (or at-least northern Indian) extraction, some of us (& I count myself in this set) tend to overcompensate by specifying the origins of the dish by geographical markers. The unintended consequence of doing so, is that rather than generate an interest & willingness to try a new dish, it may intimidate. As much as we like to claim that we are Indian first and Gujrati, Bengali, Maharashtrian next, it seldom shows up in cuisine. The first bite of any dish should gustationally scream 'INDIAN' not Parsi, Goan, Malayali.

As I write this, there are Indians rejoicing in reflected glory about Chef Floyd Cardoz's victory on Top Chef, and in particular, that his prize winning dish was the humble South Indian Upma with the usual semi derogatory connotations about its origins. Chef Cardoz's brilliantly elegant Upma Polenta was Indian in every sense of the word, and it is this spirit that I would like to discuss Monica Bhide's book  'Modern Spice: Inspired Indian flavors for the contemporary kitchen.

There is an entire generation of Indians who have grown up to primarily recognizing two names in cookbooks, viz, Tarla Dalal & Sanjeev Kapoor, The former is a diva of regional cuisine, divided statewise, and the latter, a demi god with a contagious passion for all Indian food. Their contributions are priceless in preserving the old school & traditional recipes, but if Indian cuisine has to take its rightful place alongside other great culinary traditions, it has to be an integrated cuisine. Indian food, as opposed to  East, West, North and South Indian.

Monica Bhide is quite possibly one of the brightest rising stars in the Indian culinary horizon. She is as much at home rubbing shoulders with culinary giants such as Jose Andres & Sanjeev Kapoor as she is fielding questions and comments from a slew of over enthusiastic bloggers via her facebook page and her website. An engineer by academic training, she is the author of three successful books and writes extensively about food, traditions & culture for major publications.

Modern Spice is one of those books that takes its time to sink into, and when it does, completely enchants you into falling in love with the stories and recipes contained within. Its a beautifully balanced set of  essays and anecdotes from the author's life, interspersed between a collection of about 120 unique recipes.
At first glance, some of the recipes may well elicit a comment of  "oh this, c'mon its so simple/humble, I make it practically every week" . And yet, it escapes us that this very simplicity is what makes it so delicious & memorable.

The recipes contain a collection of day to day simple yet memorable dishes that we live on & look forward to at an intimate family dinner or a gathering of friends. The thoughts and words and (some) recipes are those of a wife, a mother, a nervous graduate student rather than an established author, and Ms. Bhide excels at communicating this in the book. Just as the reader warms up to the fuzzy home made creations, the creative streak of the author becomes evident in such novel dishes as the savory cheesecakes (baked in phyllo pastry shells) paired with a red pepper and tomatillo chutney. And I've not even begun to describe the array of delightful offerings in the beverage section such as the guava bellini and Tamarind Margarita, attributed to Chef K.N.Vinod of Indique Heights in Chevy Chase, MD.

The essays speak to, and relate on a personal level with the reader. Reminiscences of the author's childhood in New Delhi, of her 'dadi maa' lovingly crushing rotis before feeding her children & grand kids at dinner, or one of my favorites (something I completely identified with personally), her love affair with 'chaat masala', and the quest to locate and retain for the long term, a suitable 'supplier'... of ready made rotis in the US! The quirks that everyone of us is endowed with, and makes us human.

We may choose to brush aside day-to-day fare with the notion that its just something cobbled up, (as the author's friend Vrinda, -- the source of the dish "V's P's"--  does) or take pride in its simplicity and ability to nourish us physically and emotionally, for that is real cooking. Chef Cardoz & Ms. Bhide recognize  it and its time we all do.

Taking a leaf from yet another essay in the book about mismatched mugs, I'd like to conclude this post with a lovely pick me up tea time offering from the book: Potato-Peanut tikkis 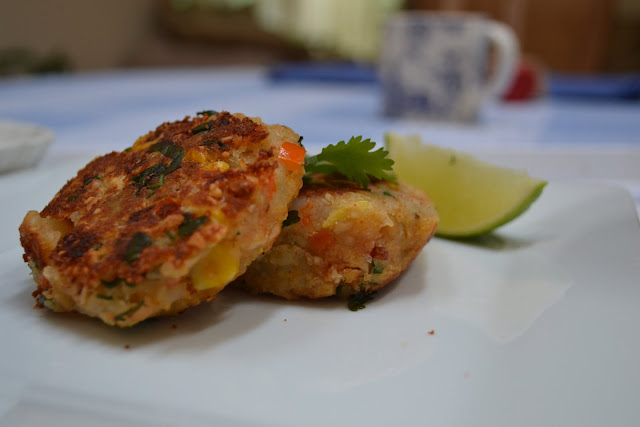 served with a side of store bought Tamarind chutney (a.k.a Maggi Tamarina sauce) and Chaat masala! 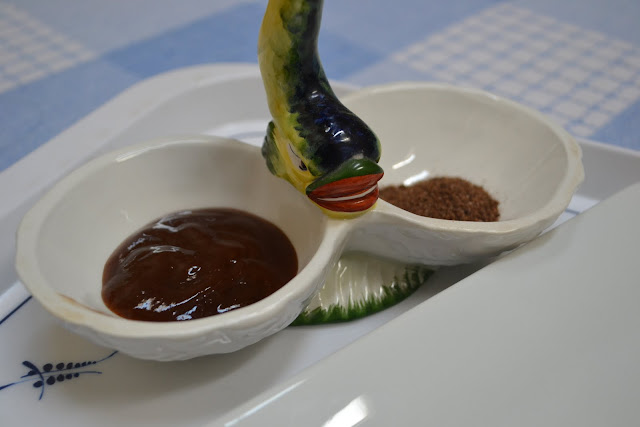 and a cup of ginger tea.. Served up in my best mugs, a gorgeous set that I had picked up 12 years ago from Tiffany & Co (and never ever use!) 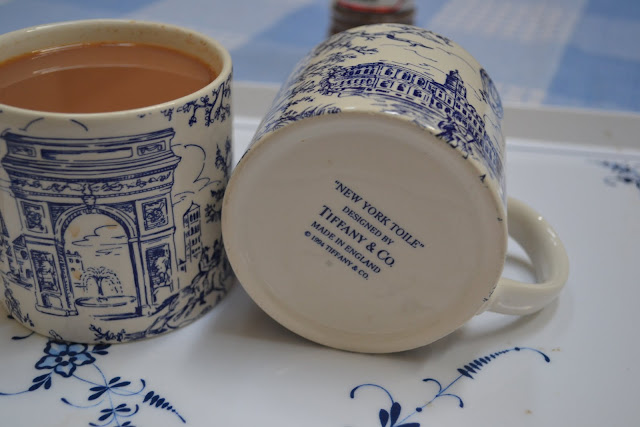 Modern Spice: Inspired Indian Flavors for the Contemporary Kitchen is available in the US thought Amazon.com and  the Indian edition is available at bookstores though out India.