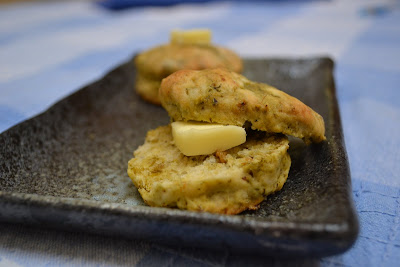 Aah summer... one week into the 80 F weather & I'm already complaining about it! Having said that, the heat is simple one of the many many aspects of what characterizes summer. Summer is the time for vacations. Growing up in India, It meant making good on those railway reservations that fathers had made in early march, (I'm NOT getting into the inefficiencies of the Indian Railways in the 1970's..), or if you were one of those privileged, yet solidly middle class kids like me..taking your chances on the 'subject to load' staff passes that Air India generously offered its employees.

For about 4 hours, you were pretty much pampered in luxury, beginning with the 'maharaja' lounges at the airports (accessible to managerial executives with business class privileges) where they'd start the feeding process with finger foods such as cream cheese sandwiches with chutney, tiny samosas & those delicious savory  puff pastries..IF & ONLY IF there were empty seats on the flight, which was a 50/50 possibility given the heavy summer traffic.  One had to take into account that you could be making multiple trips to the airport and even (thankfully remote) offloaded the airplane after you were buckled in, simply because a fare paying passenger had rushed in 2 minutes before the counter closed & had to be given an upgraded seat because economy was full!...I remember breathing sighs of relief only after the wheels lifted off! & then the feeding began...Elegant service using linen,  real silverware & fine  porcelain!

Believe it or not, airline food was something to look forward to in those days and still is relatively quite pleasant on most Indian carriers even today..quite unlike the horrendous 'greyhound buses on wings' that fly the skies here in the US of A. And yet, ' airline - bashing' is a national pastime for a lot of people from India. The very same individuals would probably smilingly accept the worst non reclining seats (32 B, E or a higher number on a non wide body aircraft) seated next to an absolute ***(take your pick of your least favorite co-passengers in this category) for a cross country red eye & wouldn't let out a peep, traveling on carriers from other countries (oh yeah... you know who you are!!)!

Back to food, there was almost a separate genre of food prepared for train travel. The  basic specs for these were that it had to keep well for at least 2 days and had to taste the same or better yet improve with age. This category eliminated most cooked dals and semi liquid  curries, relying instead on dry vegetables to be paired with deep fried breads (which remained moist through the journey) , or chutneys & 'thuvaiyals' (if you were of south Indian extraction) with rice well seasoned with sesame oil.

Fast forward a decade into the 21st century, as much as a number of us travel to India for vacations, we also have our parents traveling to the US to spend  precious quality time with us. For the more traditional & vegetarian set, it often is a challenge to find suitable food while traveling to some of the beautiful destinations across the US. At times, even as one gives in to pure decadent junk food at Denny's & IHOP, a tinge of guilt creeps in when you see your In-laws or (especially) your own parents, nibble on a piece of dry toast with country crock, and reluctantly force themselves to finish the side of hash brown you so enthusiastically ordered.. ("just add some pepper amma, its exactly the same as potato curry"), yeah right, and all the while they know for a fact that the griddle was frying a juicy strip of bacon just before their potatoes landed on it!

Its often at times like these that one wishes that some of the beloved staples such as muffins and biscuits could be ordered in  Indian flavors (and eggless to boot) . I had been toying with prototypes for this idea for a couple of months now and a breakthough came about when Food52 posted this simple and elegant recipe for cheese biscuits. The original recipe calls for the use of a stand mixer (which I've yet to invest in), so tried to mimic the technique manually with good results.
It involves no eggs (except for the egg wash that gives the biscuit a shiny finish on top) which makes it perfect for a South Indian adaptation. The cheese in the biscuits is replaced by home made coriander 'thuvaiyal'.

As we all know coriander, that Indian kitchen staple is the first to turn into a slushy slimy compost sitting in the fridge. The minute the leaf is blended into a chutney, it starts losing its vibrant green color unless an acid such as lime or tamarind is added. and even then, its probably the condiment with the shortest shelf life. To extend the shelf life, the leaves were sauteed prior to grinding to reduce the water content and then ground to a thick pesto along with toasted urad dal, mustard and tamarind (remember using citrus would be adding extra liquid, so that is out!)

For the Cilantro pesto ('thuvaiyal') you need:


Heat a tablespoon of oil in a skillet and add the mustard seeds and Urad dal. When the mustard seeds pop, add the dried chiles and asafetida. Stir till the urad dal turns a deep golden brown. Remove & transfer to the crinding jar of a blender. Allow to cool.

In the same skillet, add the remaining oil and add the cilantro leaves and allow to wilt completely (the leaves will turn a dark shade of green). Lower the heat & keep stirring the leaves around to prevent them from getting burnt (~ 3-4 minutes). Transfer to the blender jar. Add salt & process till you obtain a smooth paste.
Transfer to a glass storage container and allow to cool completely before sealing the container (to avoid condensation).

For the Cilantro biscuits (technique adapted from Merill Stubbs recipe for cheese biscuits) you need:

Mix the flour salt and baking powder and chill the mixture in a fridge for about 30 minutes. Add the butter and cilantro pesto/thuvaiyal to the flour mix. Rub between your fingers to incorporate till there are tiny pea sized pieces of butter dispersed evenly in the flour. Add the buttermilk and mix till the dough just comes together.

Transfer to a floured board and knead gently with floured hands. Pat or gently roll to make the dough into a rough circle about 1/2 inch thick. 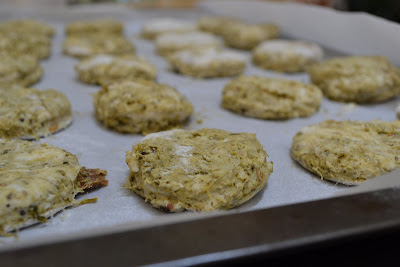 Cut into 3 inch (I used a 2 inch biscuit cutter) circles using a biscuit cutter. transfer to the lined baking sheets and bake for 20 minutes (turn the trays half way through the baking to ensure evenness.) till the tops are golden brown. (the finish will not be as glossy as in the recipe for cheese biscuits since there is no egg wash brushed over the biscuits). Remove from the oven & allow to cool. Serve warm with a pat of butter. 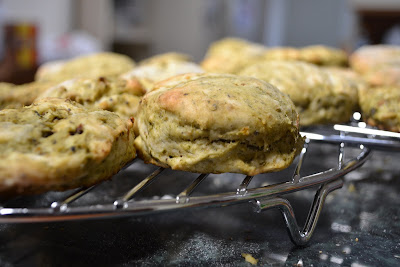 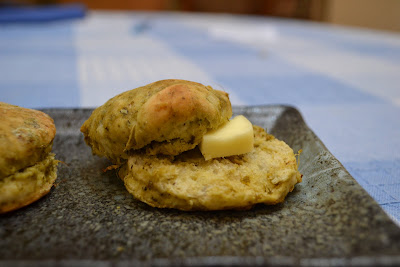