The ABC of an innovative day.... 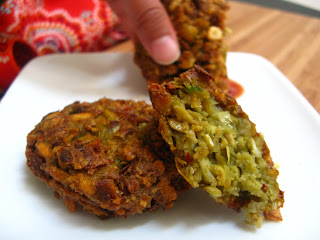 Today was a wonderfully productive day in terms of recipes.. 2 new dishes with secret ingredient that hardly features in any Indian dish, North, South, East or West.

A. One of the first things that popped up on my facebook page was a YouTube video posted of a  song that has seen a resurgence thanks to the movie Mamma Mia. Yes. I'm referring to that ABBA Classic 'I have a dream'
As with all of us who have grown up to Abba, this was that 'song of the day' that would keep humming inside my skull for the remaining part of the day, thanks in part, to an Ipod set on repeat!

B. The person responsible for the ABBA posting was Karan Bali, an alumni of FTII and co-founder of http://www.upperstall.com/. This is the site I go to by default whenever I need objective information & reviews on any Indian movie in any language, new or not. Its one of the most comprehensive databases for all kinds of films made in India. Do take a moment to check the site out, Its definitely worth it!

Yes that's right, chokes & I don't mean the asphyxiating kind! I'm referring to my new found veggie muse, that refined cultured cultivated cousin of a prickly weed, the thistle. Yes.. The artichoke.
Pratibha Jain of pritya books had announced a giveaway by the blog sweet artichoke for recipes using artichokes, cardoons or banana flower...(No clue why the banana blossom was even linked to the other two)
Artichokes rarely find a mention in Indian cuisine, because, they're not traditionally cultivated in India. so much so that it fits the classic definition of a 'foreign' vegetable. Prickly & forbidding, its hard to comprehend what flavor profile it brings to the palate, especially when the canned version is the most  prevalent & easily available one.
Artichokes have manuals written for their preparation prior to cooking. Remove the  leathery outer leaves, cut away the top half, scoop out the feathery choke in the center, & drop into acidulated water all in the span of less than 10 seconds to minimize the instant browning of the exposed parts due to oxidation...In the end you're left with a mountain of discards for the compost heap & a molehills worth of edible stuff.
Artichoke prepping is definitely a labor of love, but worth the rewards. The texture is similar to the heart of the banana blossom (the white part that does not require the laborious task of removing the stamen), but much more softer & delicate. Very nutty with a satisfying mouthfeel, it shares a unique characteristic with the Indian gooseberry (amla) in that after consuming, everything else eaten afterwards tastes sweet! There is also a mild tannic component to the aftertaste.

Well If banana blossoms can give rise to a beloved classic South Indian snack, the vazhapoo vadai, here is the debut of the 'artichoke masala vadai'.
Makes ~ 10 -12 pieces.

You need:
10 fresh baby artichokes (not the baseball sized ones which have the choke), enough for 2/3rd of a cup
1 cup chana dal (soaked for 2 hrs)
2-3 green chillies
1 sprig curry leaves
2 scallions, chopped (just the white & light green part, not the dark green leaves)
a pinch of asafetida
Salt to taste.
Oil for deep frying.

Combine all the ingredients except the artichokes & salt & blend into a coarse paste using minimal water. Set aside.

Using a small paring knife, trim off the leathery outer leaves, exposing the closed part of the artichoke 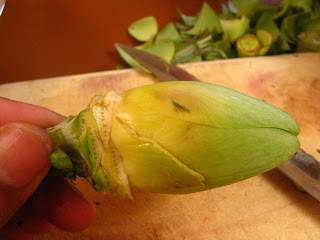 Cut off the top half of the artichoke retaining only the pale yellow base. 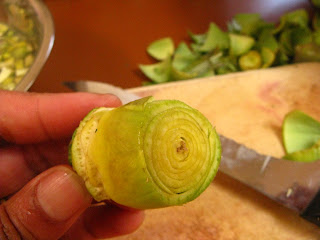 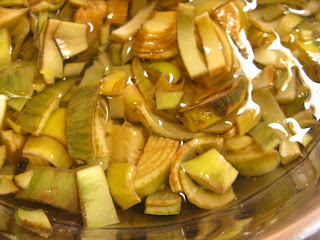 prior to combining with the vadai batter, remove the water & mince into small bits. 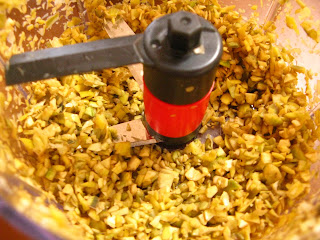 Measure out required amount and add to the prepared  batter.
Add salt to taste and shape into flattened discs or patties of approximately 2 inch diameter.
Heat oil in a cast iron wok. When the oil is sufficiently hot deep fry the patties in batches of 2 - 3, until golden brown on both sides.
Remove from the oil & drain on paper towels to remove any excess oil.
Serve warm with a side of coriander or coconut chutney & a piping hot cup of coffee. (or else make to with ketchup like i did!) 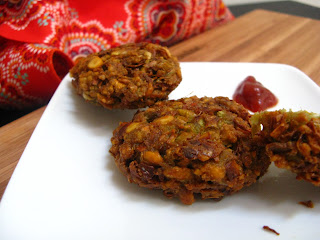 The second recipe using artichokes will  be posted along with the next blog entry, a book review of Sanjeev Kapoor's latest book, 'How to cook Indian'