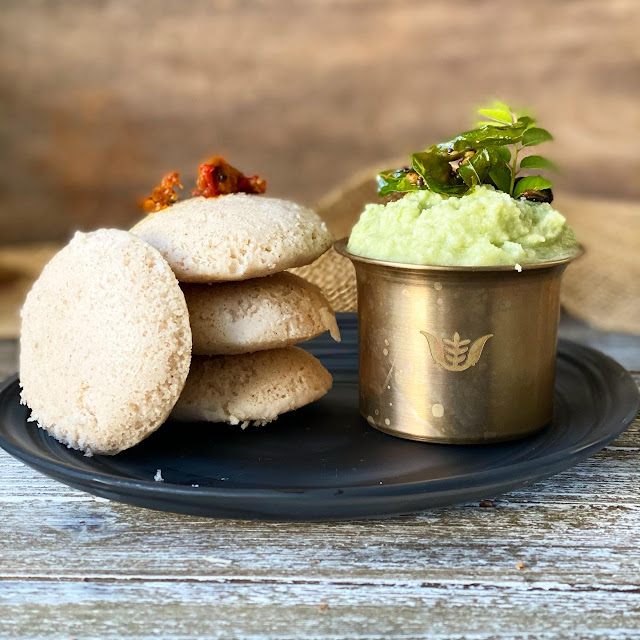 Just because something works doesn't mean it cannot be improved
- Letitia Wright (Shuri) , The Black Panther

The iconic Idli has and always will be a signature Indian dish. As  a child, I'd watch my mother seat herself in front of the grinding stone  (attukal in Tamil) and spend the next couple of  hours making two different batters - one with parboiled soaked rice and the other - with hydrated Urad dal.
The starch batter usually went first, and was done relatively quick. the next one - with the lentils for some reason, took over an hour. By the time I grew up, the old grinding stone had been replaced with a blender. and my mother would ever so often wax nostalgic about the old stone ground batter and how the blender heated up the batter and made the idlies lumpy instead of the fluffy spongy ones she'd eaten as a child growing up in rural Tamil Nadu.
As a teenager I once had the chance to make batter the traditional way and it was one serious workout but the texture of the idlies made that hard work totally worthwhile.

Fast forward three decades and I've gone through plenty of gadgets in the search for the perfect idli. Blenders, as my mother often said, heated up the batter, and even if the batter fermented to perfection, the idlies ended up being relatively chewy. The dosa grinders (Tabletop versions of the industrial chocolate conchers)  yielded idlies much closer to the original,  but it was a pain to haul the heavy machine on to the counter and spend over an hour making the batter and cleaning the rollers and containers.. but making the batter was only one third of the problem

In tropical climes, fermentation is a cinch. a batch left to rise in the afternoon would be all risen by dinner time. Not so in most of the continental US (Hawaii perhaps, but definity not in Alaska). I remember my aunt (in 1980, when I first visited the US as a kid) set the container of batter in the furnace room. When I began making the batter from scratch, I'd place the metal container in the oven with the light switched on, trying to get the optimum placement - too close and the side facing the light would heat up enough to dry out the batter, too far and it wouldn't rise at all.
When I remodeled my kitchen, we invested in a double oven range - Two years after using that new appliance - the light blew out, and I discovered the feature that put an end to all the guesswork about idli/dosa batter fermentation - the 'PROOF' button. You see,  this magical setting (definitely NOT designed keeping the Indian home cook in mind) heats the oven to a balmy 85-95 F temperature that the idli batter microbes thrive in, even when the weather outside is described as an Arctic freeze.

Which brings us to the last 33% of the entire idli batter mystery.

AS my mother used to complain, generic blenders tended to heat up the batter while grinding, while the lentil part of the batter takes about 30-40 minutes in a dosa grinder. Investing in a Vitamix solved the problem of the warm batter, the super powerful machine makes a large batch of batter in less than a minute.

A couple of weeks ago, I stumbled upon what may have been the solution to the final mile of the problem.. getting fluffy spongy homestyle idlies , entirely by serendipity.

Was in the midst of making dahi vada for the family when I stumbled upon a tip from Anjana Chaturvedi's blog Maayeka - She calls for the vada batter to be whipped well before frying, a tip i had been following for a long time when making pakodas for kadhi (learned that from Madhur Jaffrey's book - climbing the Mango tree) . On a whim, decided to make the Urad dal part of the batter first, transfer it to the container and took an immersion blender stick attached to a balloon whisk to it. Lo and behold, the batter took on the texture of meringue. 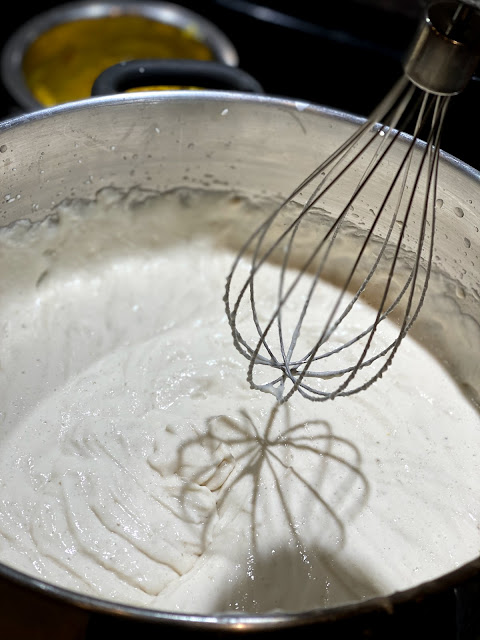 The rice batter (with salt added previously) was then folded in like you would a cake batter and then placed in the oven with the proof setting on. On a hunch I made sure to line a baking tray with foil and place the container on it, and sure enough 11 hours later  I had this - 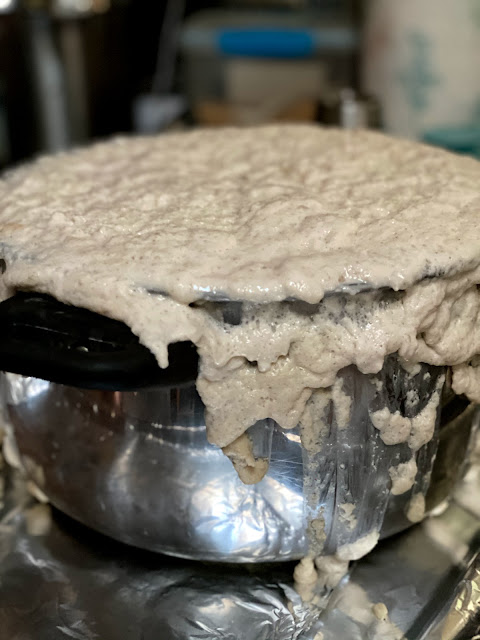 The resultant Idlies were as close as it got to the ones I'd tasted in my childhood. It just needed a few extra steps to be incorporated when using modern day gadgets from this century.

Add the soaked lentils to the blender jar and grind until you get an ultra smooth batter. Transfer to a large  container and whisk until you get soft peaks.
\Grind the soaked rice along with enough salt into a smooth sludge and fold into the the urad dal batter until they're combined well. Proof at about 90 F for at least eight hours. 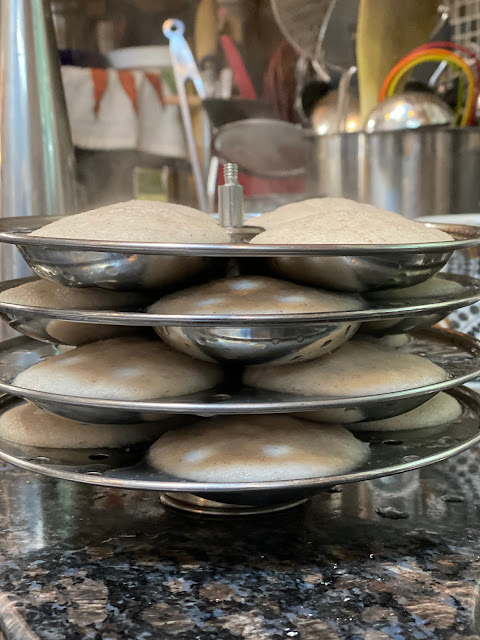 Stir the fermented batter well before ladling it out into idli molds (if you don't have one of the traditional lens shaped molds, refer to this blog post of mine for alternatives)
Steam for 10-12 minutes. Scoop out the idlies when the plates cool a bit. Serve hot with your favorite chutneys , Sambar or milaga podi.