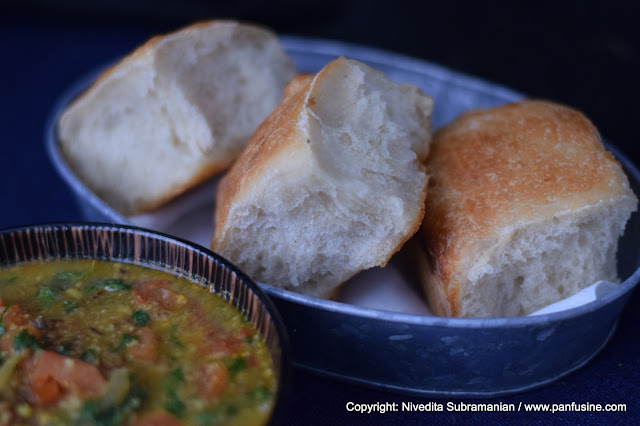 Anyone from Mumbai (the city formerly known as Bombay), with a passion for its incomparable street food will relate to the following scenario. Standing in front of a vendors cart waiting for a fresh batch of Batata vadas (garlicky potatoes enrobed in a spiced chickpea flour batter) to be fished out of a huge wok of hot oil, there is an aroma that quietly stamps itself into your memory. Rustic, yeasty and downright comforting. The stacks of  country rolls piled up 2 feet high, in the corner. These are the native 'Ladi Pav', a Portuguese contribution to this vibrant culinary scenario.

The Pav is everything that the snooty slice of white bread is not -  tough, chewy, with a tang that is halfway to sourdough. Its usually partially sliced,  soaked in melted butter when served up with Pav bhaji or Usal. Alternatively, dusted liberally with garlic chutney with a golden orb of batata vada stuffed in between. 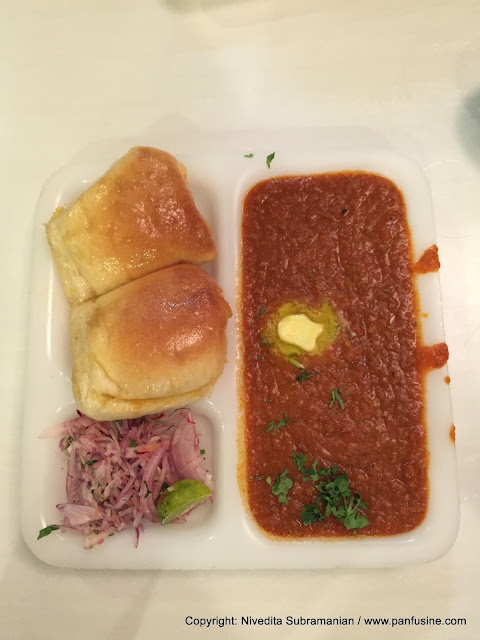 Lets not beat around the bush, the Pav has always been looked down upon as a 'country' cousin compared to the sliced loaves. For one, it never comes packaged. instead its delivered by teenagers on bicycles. bulk packaged directly in large plastic/ canvass duffel bags Although I have no way of verifying this, Pav is probably part of a small scale 'cottage' industry, unregulated by food authorities.
There is no clear way cut way of finding out what strain of wheat the flour comes from or what leavening yeast is added or  the status of the bakery it's made in. 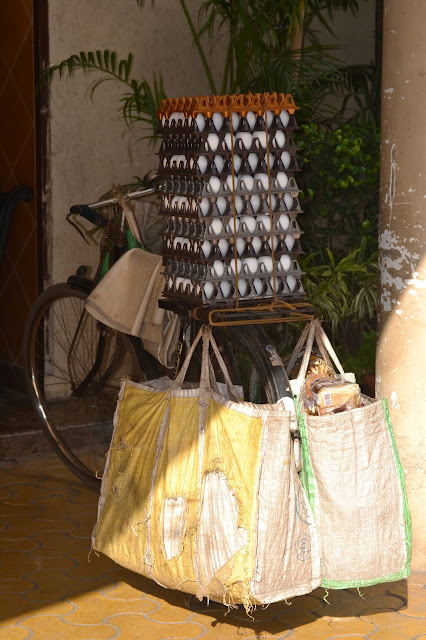 As much as we love our streetside Khau galli vada pav & pav bhaji, how many have ever ever viewed the pav as an artisanal bread? I'm betting the term never crossed your minds and I don't blame you, Same here. We never seem to overtly pay attention and appreciate the very nuances that that make the pav  such a favorite comfort food, Its a nameless creation from anonymous corners of the city that we would rather not know about or find out.

Last Sunday was the Superbowl and due to a mix up about what my 10 year old wanted for the big day, I ended up with a bowl of no knead  Pizza dough (Jim Lahey's recipe from the New York Times) that somehow escaped its original purpose. So there I was, faced with a request for making Pav bhaji and absolutely no rolls of bread. 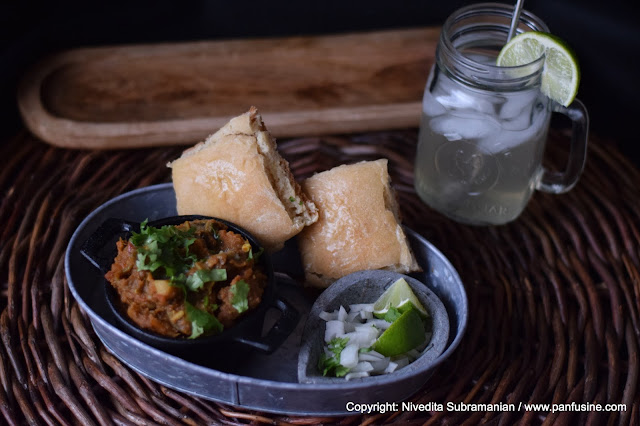 The day old dough did not command my full attention at all, more of a hack job, I divided it into  8 rolls and threw them into a  9 x13 baking pan and let them proof a second time. They proofed all right more like a large cookie / whoopie pie shape. disheartened I set the oven to 350 and baked until the top turned golden. The resulting rolls were rather hard, but the resultant crumb was a revelation. I seemed to have nailed the tangy unique flavor of the pav and even some of the stretchy chewy texture.
Drawback: the amount of salt specified by Mark Bittman in the recipe was too little. 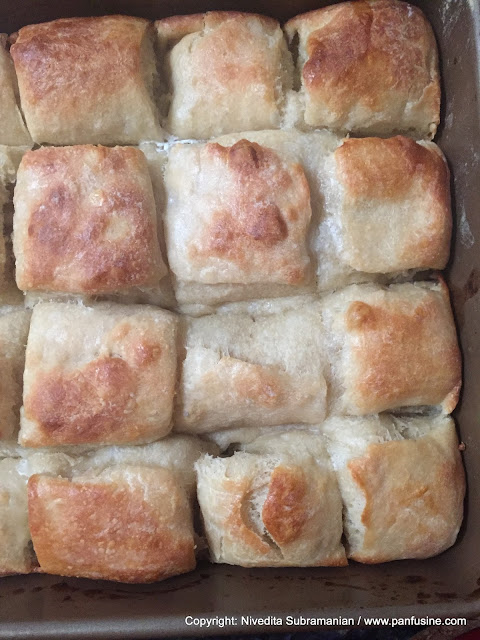 Lesson learned from the earlier session - Use a smaller baking tray.
Mistakes made: I divided the dough into 16 rolls, and worse, I ended up disturbing the dough by trying to further divide it 5 minutes after it went into the oven. I also set the temperature to 400 F.
Net result: the crumb was chewy all right but unevenly baked, lumpy in places where I had cut through with a dough scraper And yes,  One tablespoon salt was too much.

Bread flour tends to be higher in gluten compared to All purpose flour, and I believe that plays a major role in the resulting texture. If you don't have access to bread flour, then add gluten to all purpose flour and sift well to combine. 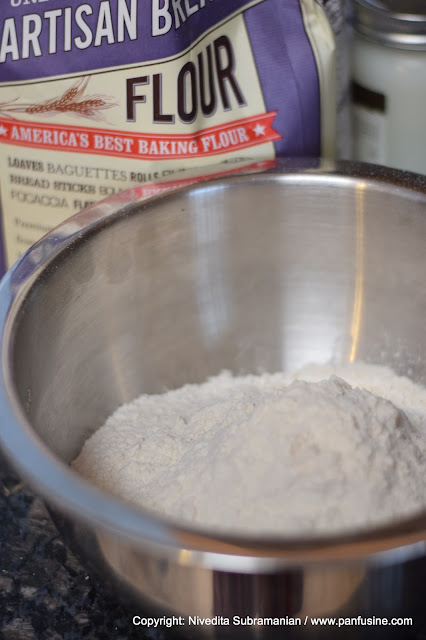 Add the salt, whisk to disperse and then add in the yeast. 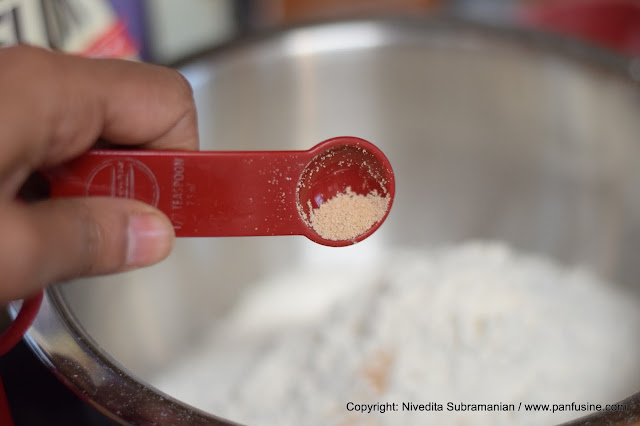 Pour the water in the middle of the flour, fold in using  a silicone spatula until all the water is absorbed and there is no residual patches of flour at the bottom of the bowl. 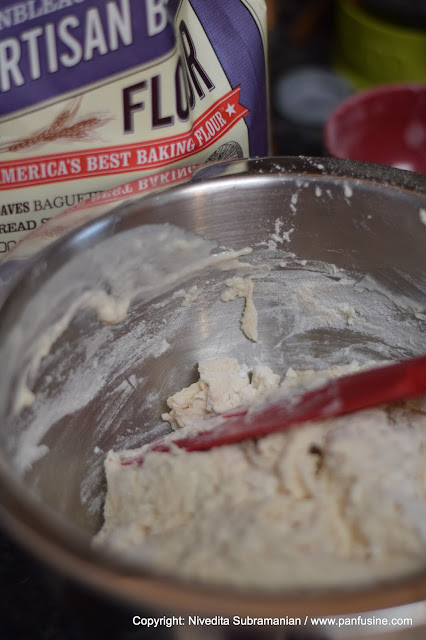 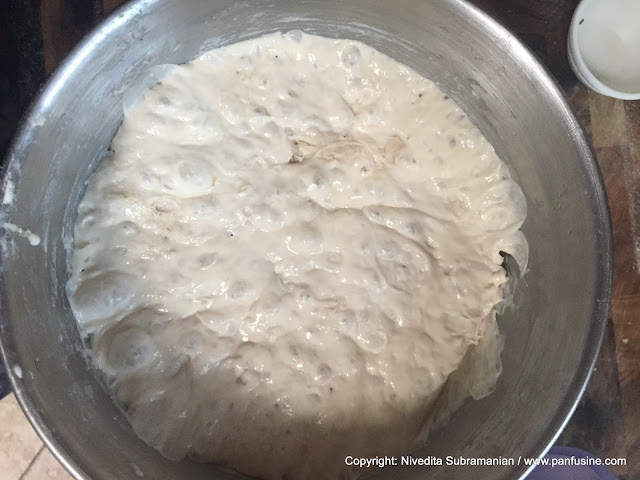 This is what the dough will look like the next morning. Punch down the dough (it will resemble putty, slightly sticky but rather malleable).
Grease the bottom of a 9x9 inch square baking tray and dust with flour or . As I learned from Version 1.0, the size of the pan is crucial when it comes to shaping the rolls.
Oil your palms generously and divide up the dough into 9 equal portions . Use the weighing scale for accuracy. Roll the balls of dough to a 'somewhat' smooth consistency and place them seam side down, on the baking pan.

Allow the dough to proof in a warm place (I use my oven's proof setting for the purpose) for about an hour. In the meantime preheat the oven to 450 F. 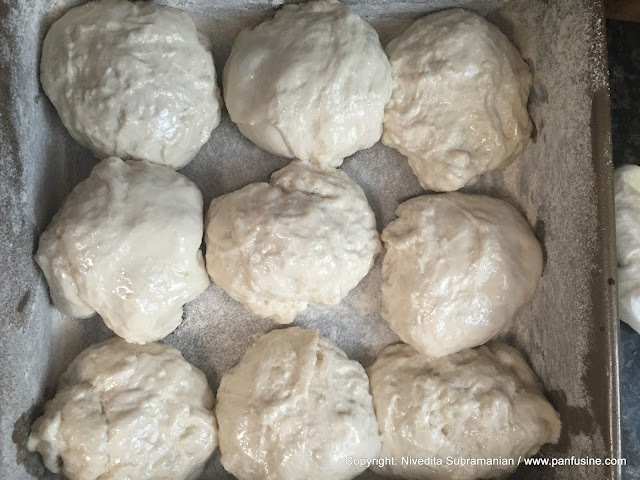 The rolls should look similar to this when they're ready to be baked. However tempting it may be , do not, I repeat DO NOT try to score the lines between the balls of dough. In bread terms, that would be like slashing a major artery in a living animal. The bread will deflate to its death,
Brush the surface with the whisked yogurt / kefir. 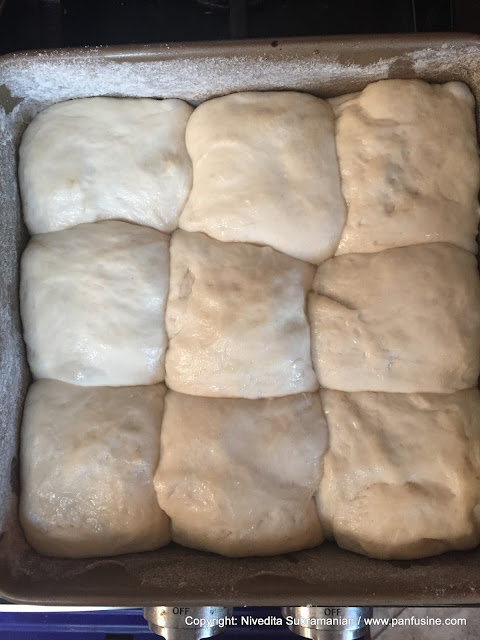 Bake in the oven for 30 minutes, turning the pan halfway through the baking. The surface should be a golden brown and the loaf should sound hollow when tapped lightly. 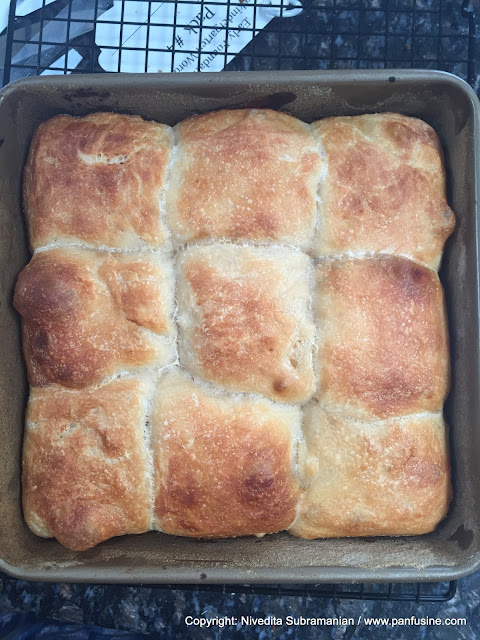 Place the pan on a wire rack and let the bread cool in the pan for about 15 minutes. Then, tip the bread over from the pan and cool completely before even thinking about trying to sneak a roll.
ANd when you finally get to tear into the roll, the aroma that hits your nose will make you want to turn around and search for a vada pav cart that perhaps may be hiding in plain sight.

Cut along the side (like a burger roll) slather with the best butter you have and press down the roll on a hot griddle. This melts the butter into the nooks of the crumb. Serve up with Potato Vadas or Pav Bhaji (yes, I shudder at my own suggestion of using store bought saloio rolls) . 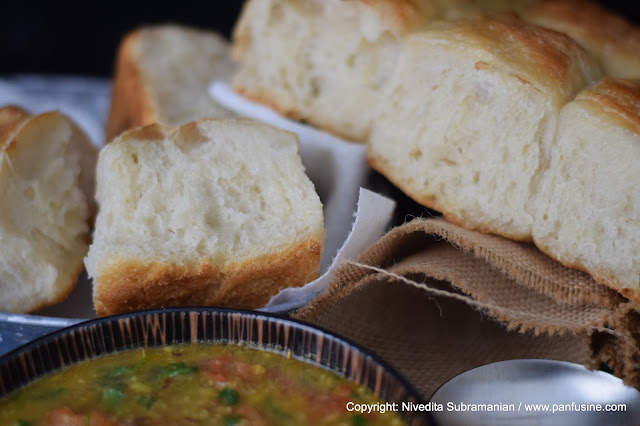 I opted to pair this with another classic lentil curry from Maharashtra,  Usal. 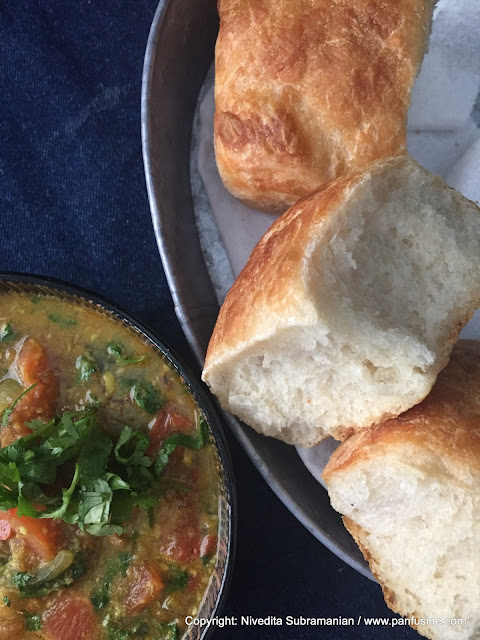