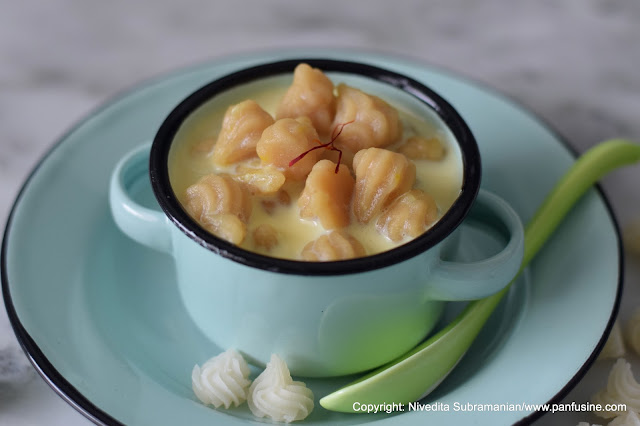 This is officially 'Modak' week in India (the week in question actually stretches out for 10 day's but who's counting?)

The festival of Ganesh Chaturthi marks the birthday of Lord Ganesha, that happy, cheerful elephant-headed god of good luck and fortune. Its such an entrenched part of the Indian culture (especially in western and South India) that it may be hard to believe that this magnitude of celebration and devotion goes back only to the last century. What was once a single day festival celebrated in the privacy of individual homes was redefined as a public display of devotion and community as a way of allowing freedom fighters to mingle freely without arousing the suspicion of the British officials.

I had blogged about the main 'prasad' (offering ) two years ago, with recipes included and I don't plan to repeat those in this post. but one of the three recipes there underwent a serious Panfusine change. The last part about the tiny ammini morsels where any left over rice flour dough was pinched off and rolled individually into little spheres, steamed and then seasoned with mustard, curry leaves and spices.
As you can imagine, rolling little marbles of sticky, tacky rice flour dough with palms and fingertips greased in sesame oil , and then setting them aside to steam before the final step of seasoning,.. and after all this the family seems to 'inhale' the whole lot in 2 minutes. Phew! talk about labor intensive.

Every family has its story about silent pleas to Lord Ganesh praying that the modaks that they're about to make does not 'trip' them over (Literally translated from Tamil as 'Kaala vaari vituddum), as rice flour can be rater temperamental and there's nothing worse than setting the modaks in to steam and discovering that its disintegrated into a mush in 10 minutes.

Well, there's a bit of science behind working with rice starch and it involves terms like amylose and amylopectin which you can read up on Wikipedia. The take home message is that hydrating these starch components correctly yields a texture to the rice flour dough which is pliable and holds its shape well under steaming - As long as you knead the dough without lumps or tiny air bubbles. A hand blender fitted with a dough hook attachment is perfect for the purpose. 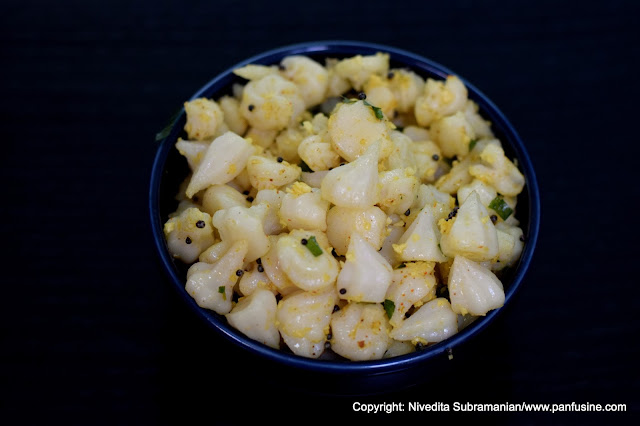 For the dough you need:

Combine the salt and rice flour in a mixing bowl. Add the scalded milk to the boiling water. keeping the hand blender running on low, slowly drizzle the water into the flour and knead it until it comes together (you may not need all the 2  cups of liquid). If you're making the sweet version, then dissolve the sugar/gud in the water and add the milk separately.

Once the flour can easily be scooped up into a large single ball, cover with a wet towel and allow the dough to cool. This helps to hydrate the rice flour thoroughly, enabling the amylopectins to work their magic.

I made my first video ever on the technique of using a piping bag fitted with a nozzle to explain the process, so here it is. It basically involves fitting the piping nozzle and filling the bag with the dough. squeeze out any air bubbles and just pipe away.


Steam these dumplings for about 10-12 minutes. Remove the plate and allow the dumplings to cool slightly after which they can be easily picked off the cool metal plate. Another alternative would be to pipe them onto banana leaves . I find that greasing the surface prevents the piped out dumpling from adhering to the surface, so no oil / grease required at all.

I tried using an assortment of various nozzle tips and rounded up my favorite 5. All the shapes aren't created equal, and some of the more stylish looking shapes actually cause the steamed dough to dry out rather quickly. 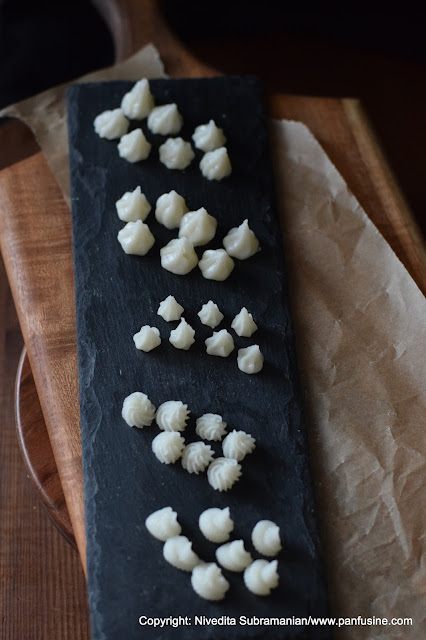 So my 2 cents: stick to the smoother shapes like the simple 6 sided star or the fine shell shapes 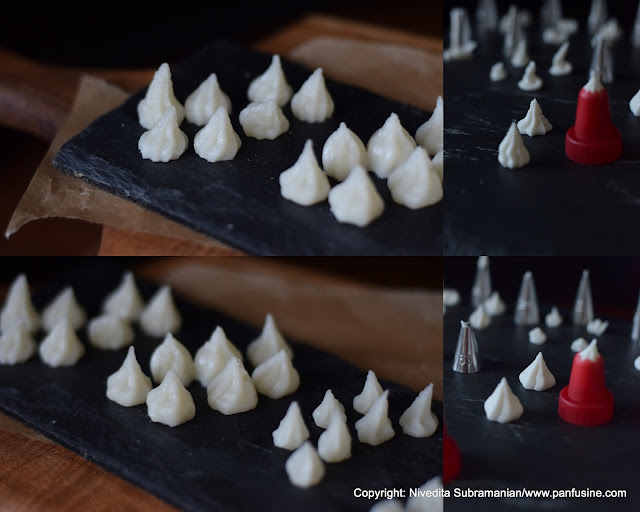 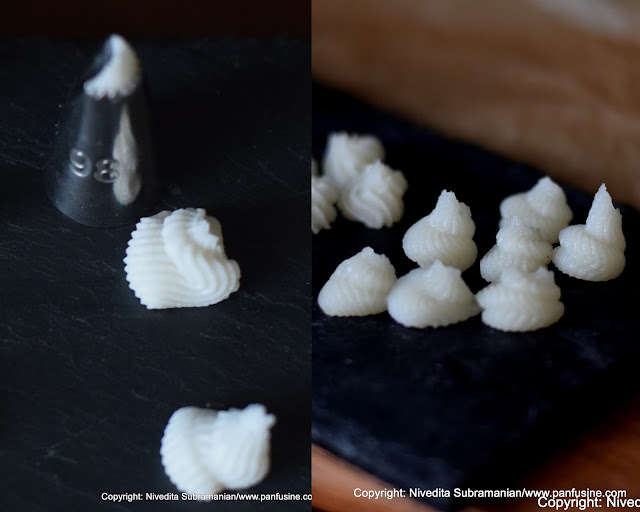 For the savory modaks, the ingredients for the tempering is as follows:

Heat the oil until its almost smoking and add in the mustard seeds. Once they sputter, add all the other ingredients, except the lime juice. Lower the heat. Once the curry leaves look crisped up and curled, pour this oil mixture over the steamed ammini modaks and fold to disperse evenly. Drizzle with lime juice and serve warm. 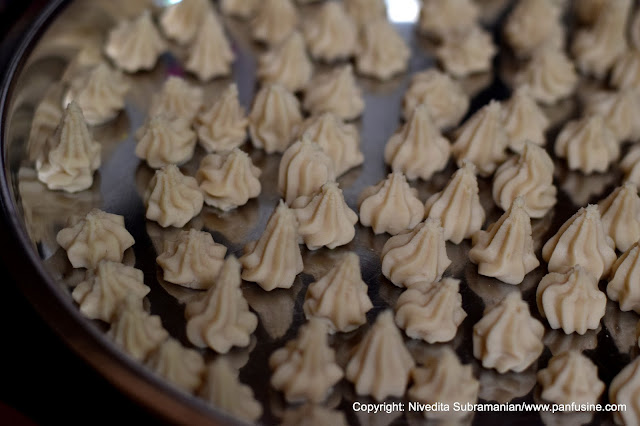 I used a sweet version of the steamed dumpling for a 'payasam', Combine half a can of condensed milk 4 cups of 2 % milk along with 1/2 a teaspoon of powdered cardamom and 6-8 strands of saffron. Once the milk mixture is simmering away, add the steamed dumplings and simmer till the dumplings are soft and springy. Serve warm. 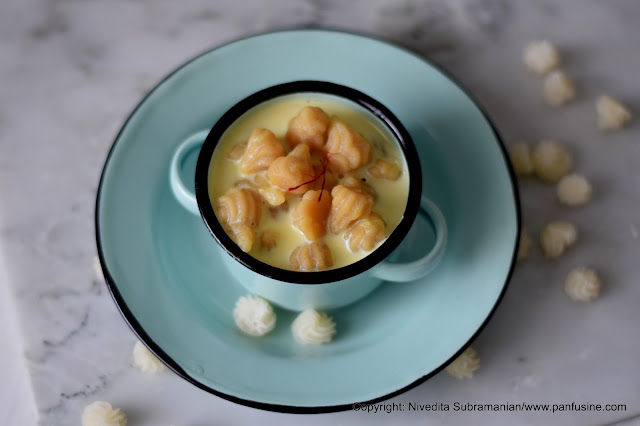 ere's wishing everyone great beginnings for success in whatever you're aiming for!