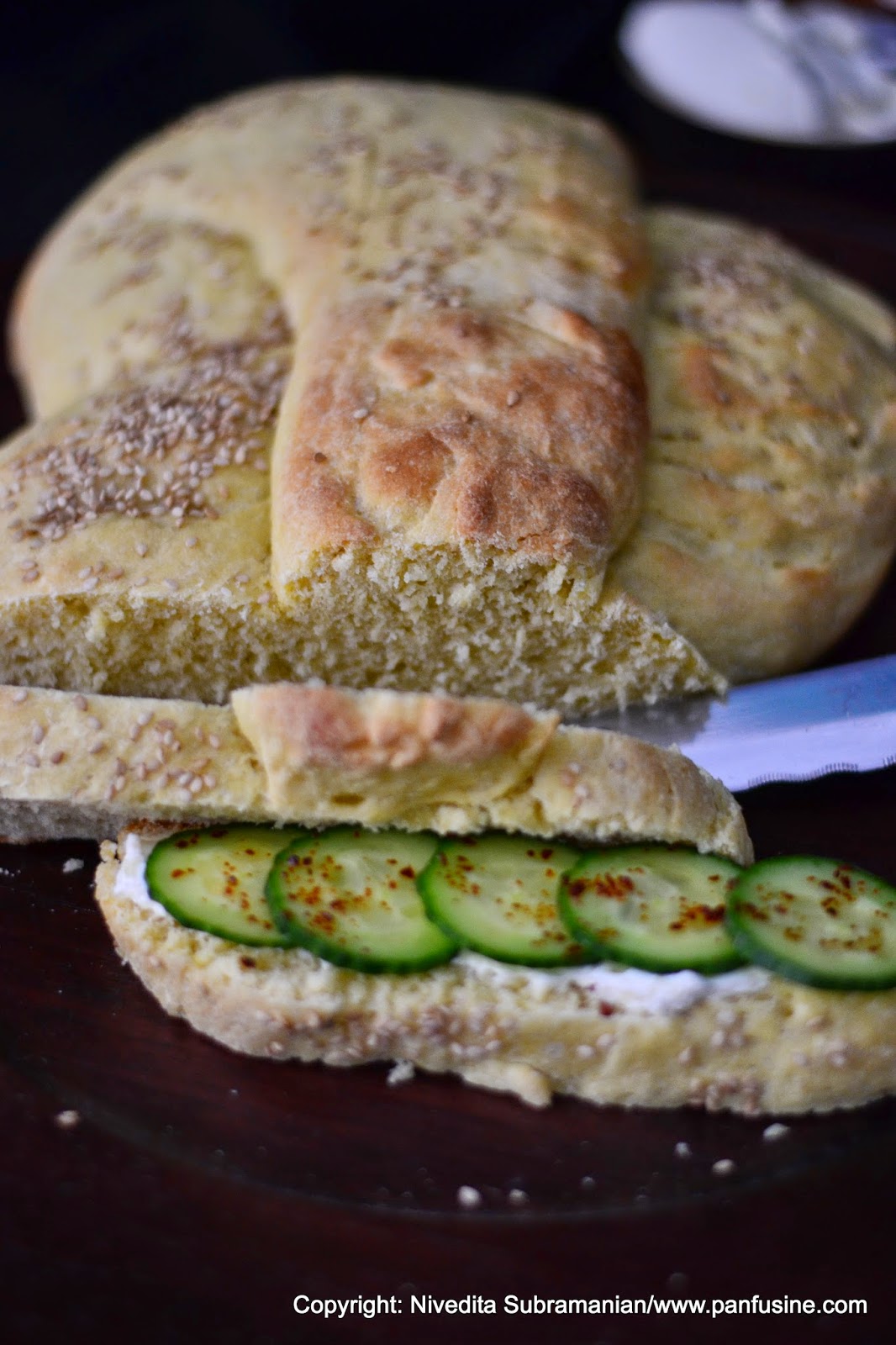 I can't think of a better way to start my blogs than with a great bread, There is something so primal,  so satisfying about bread, I wonder sometimes if there is an evolutionary aspect to bread and the effect its aroma has on the human physiology. The glorious 'umami-ness' (if there does exist such a word), the caramel colored crust and the pillowy chewy crumb within.

Aparna's pick for January's bread was a simple Pane Siciliano, which is made from Durum Semolina flour rather than the standard all purpose flour. The result is a  bread whose crumb isn't quite 'airy' , but rather fine. The addition of a pre- ferment (the Cresciuta as its called in Sicily) adds a depth of yeasty flavor.


For once, I didn't add to or tweak on the original recipe, In fact, I made sure that I stuck to the original list of ingredients and followed the recipe to a T. 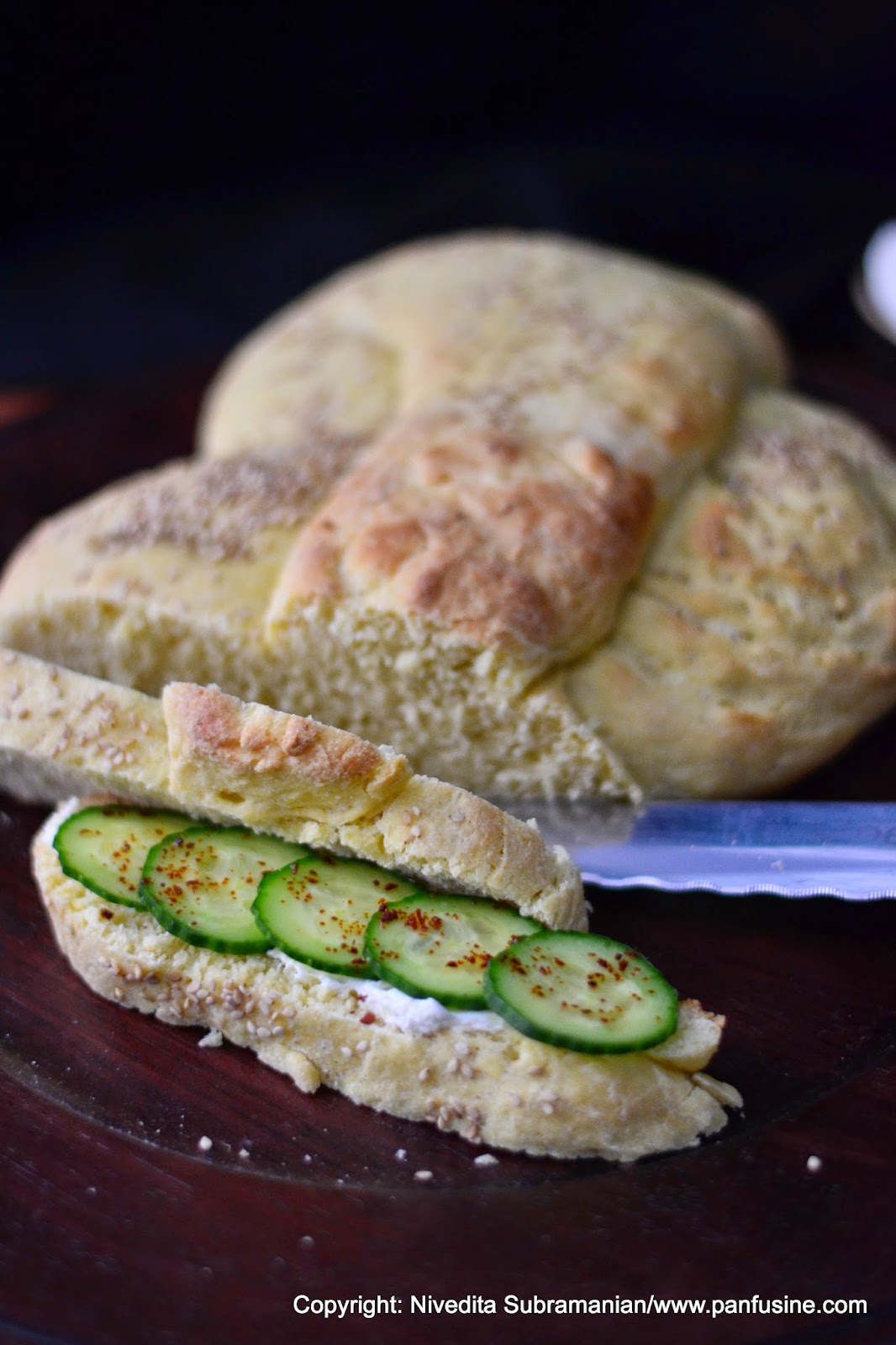 For the Pre-ferment/ cresciuta/ Biga

Whisk in the yeast with the lukewarm water in a bowl and gradually incorporate the all purpose flour to make a 'slurry'. Leave the yeast alone to bloom in a warm place for at least  four hours (preferably overnight). The resulting pre-ferment will be a stringy wet mass by the time you're ready to make the dough.

To make the dough, whisk the yeast, honey and the lukewarm water together in the mixing bowl of your processor (fitted with a dough hook). Allow it to rest for about 10 - 15 minutes until the yeast blooms and froths up. In a separate bowl sift in the semolina, wheat gluten and the salt.


Keeping the machine on at the lowest setting, add in the cresciuta and allow it to mix well into the liquid without any lumps. Gradually add the semolina mixture into the processor bowl along with the olive oil and knead until the flour forms a smooth ball of dough. Transfer the dough into a lightly oiled bowl, cover loosely and allow to rise until double in volume (~ 1.5 hours).

Remove the dough onto a rolling surface and shape it into a 'snake' (about 30 inches in length). 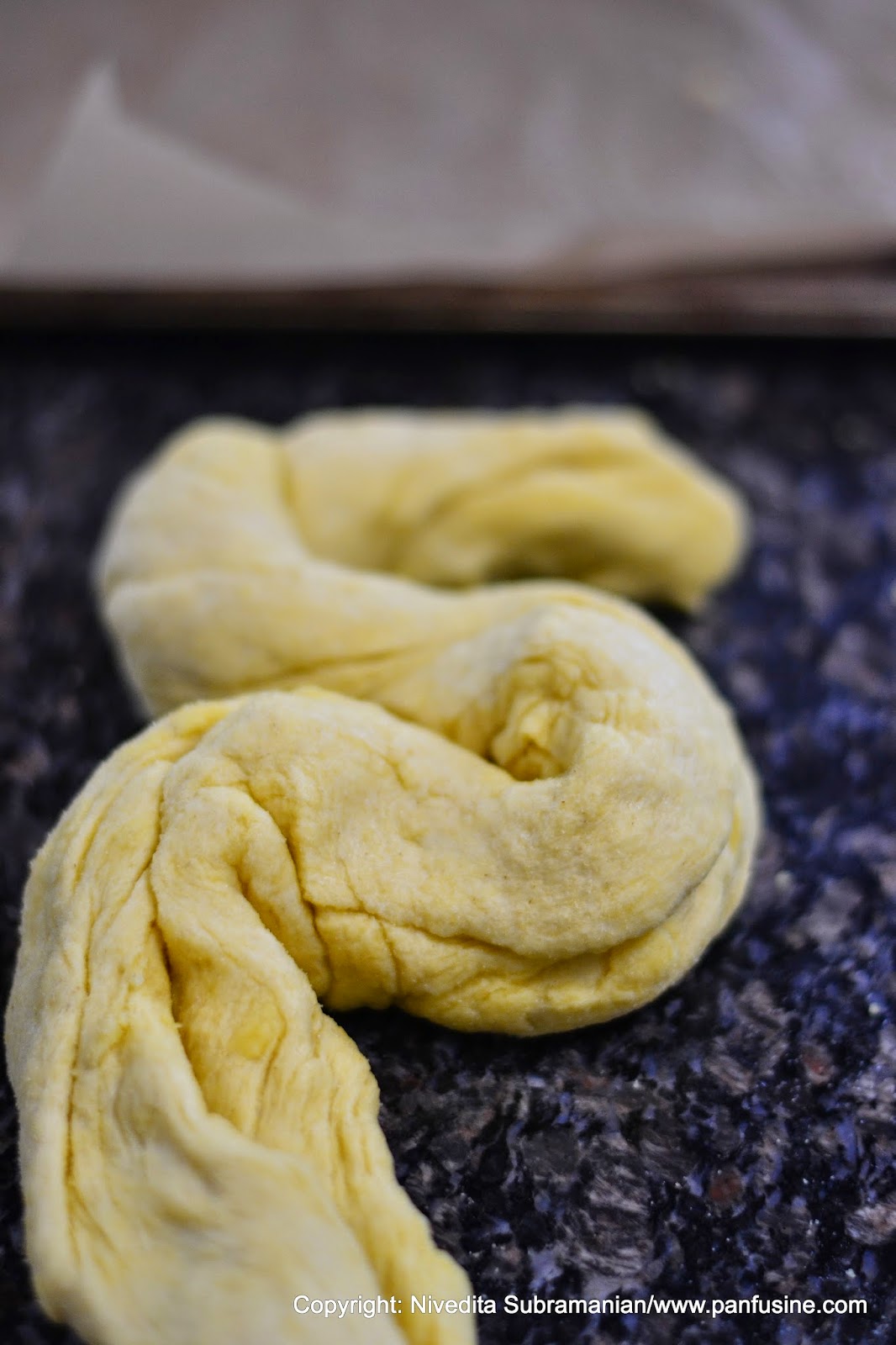 Line a large baking sheet (I used a pizza plate) with parchment paper and transfer the dough onto the plate. Shape the rope into a sine shaped wave with about 6 - 7 inches left. Gently place the end of the 'tail over the curled up dough without tucking it under. Cover and allow the shaped dough to double in size.

Preheat the oven to 375 F . Brush the surface of the inflated dough with milk and generously sprinkle sesame seeds over the surface. Pat down gently to ensure that the seeds stick to the top of the dough. 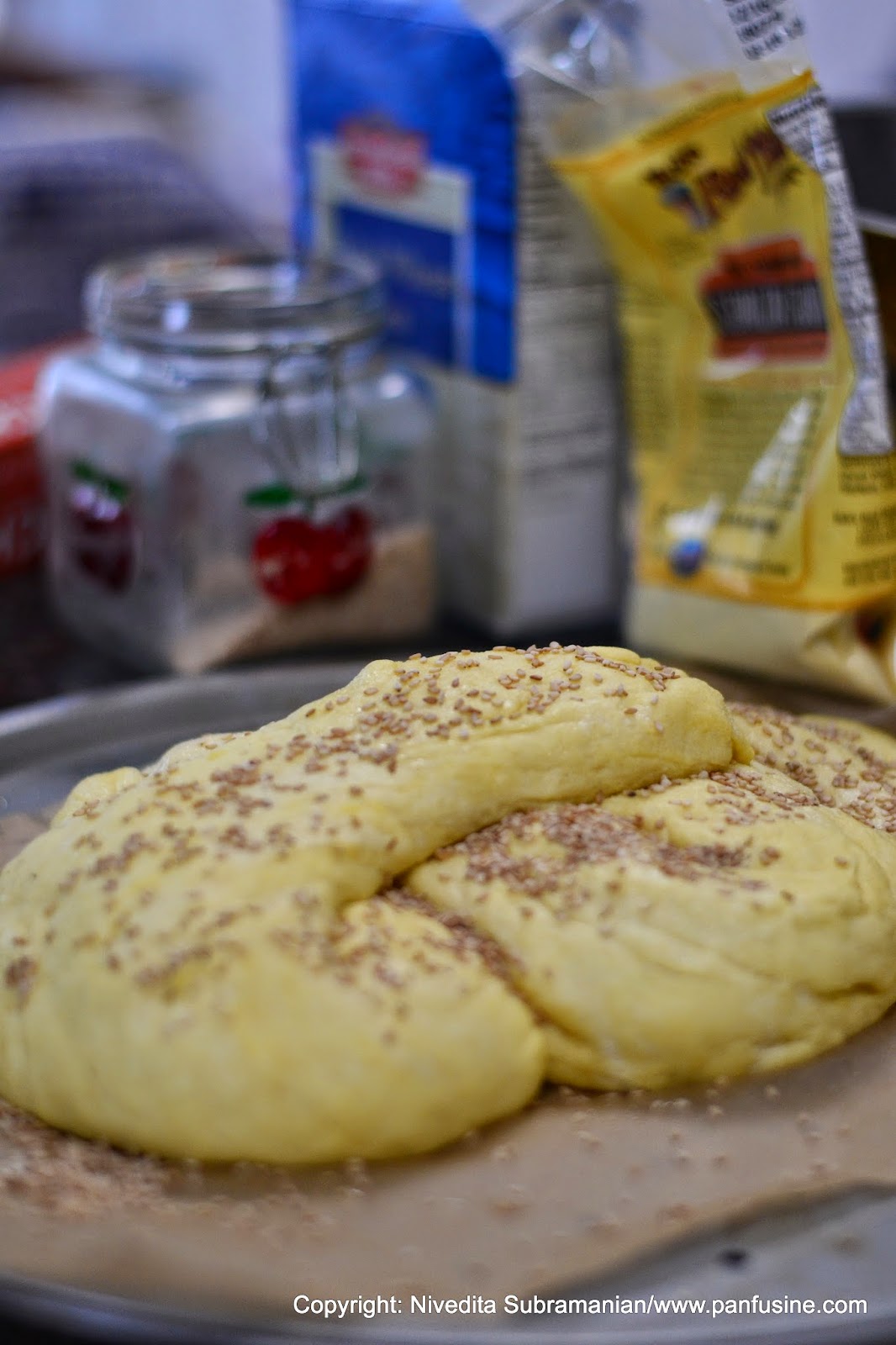 Bake for about 30 minutes until the top browns nicely and the bread  sounds hollow when tapped lightly. 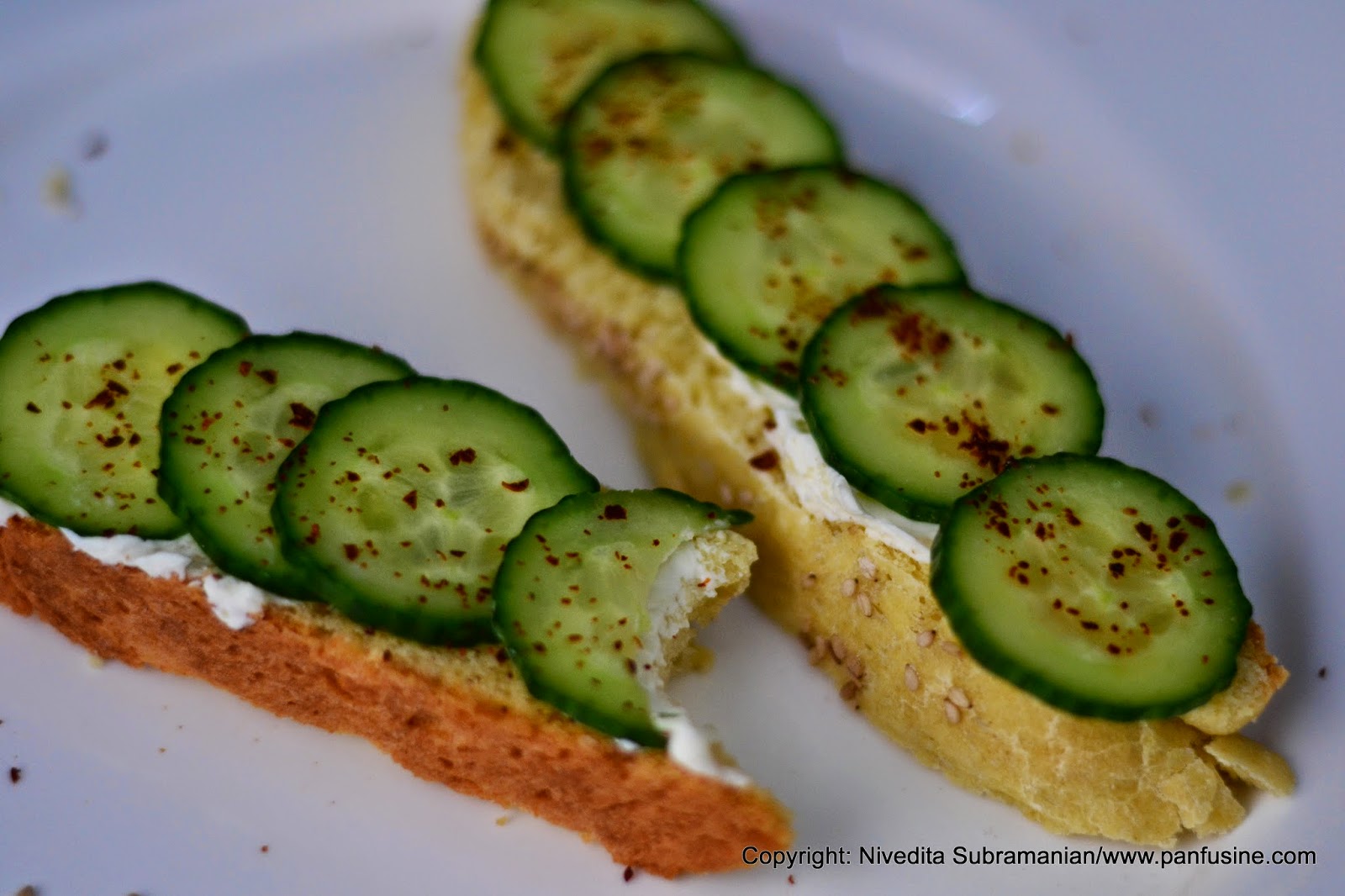 Remove from the oven and allow to cool completely before slicing. I served up the loaf with a smear of Neufchatel cheese and thin slices of cucumber. The open sandwiches were perfect with a cup of hot tea.
Bon appetit!