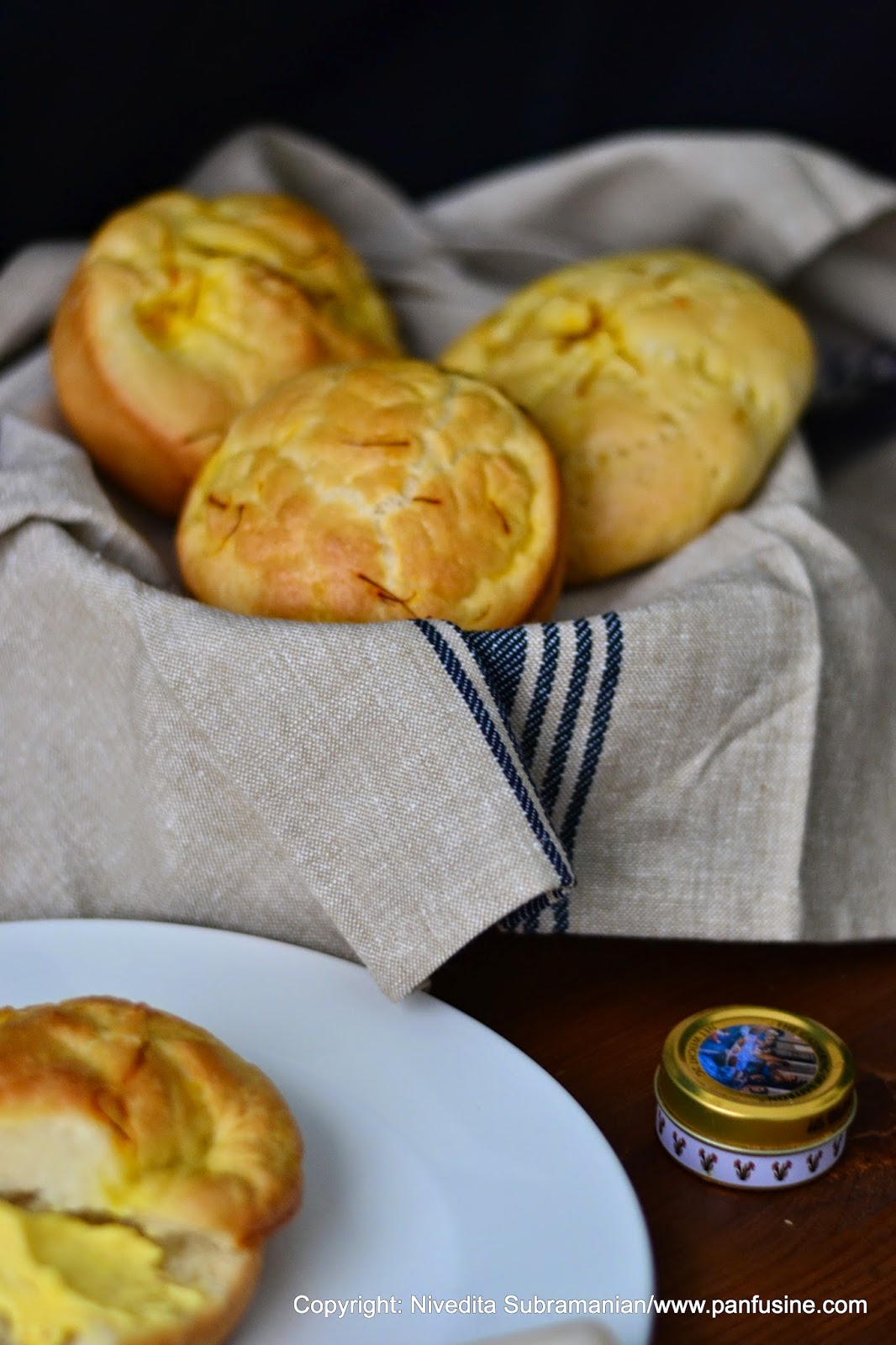 Its been a while since I did one of these baking projects. Lets see, I made the bread (Gibassier) for July but did not blog about it, and then completely skipped the next three sessions. Of course, there was a bit of ambiguity in the selections, so laziness got the better of me and I merrily skipped these.
Aparna Balasubramanian's selection for this month was a recipe from Indian cuisine, a lesser known bread compared to the ubiquitous Naan & Kulchas.

Sheermal traces its origins to Persian cuisine and is basically a leavened bread kneaded with milk instead of water. Its slightly sweetened and the primary flavors are the heady notes of Saffron, backed up with a supplementary floral flavoring, usually rose or screwpine /pandanus/kewra. The 'Sheer' apparently is the Persian word for milk and thats where the name originates, although the term also occurs with the same meaning in Sanskrit (Ksheer).
It is traditional eaten as a breakfast dish along with tea or paired with the rich thick bone marrrow curry known as 'Nihari' in Northern India and Pakistan. Its mild sweet flavor must complement with the robust spicy bone marrow. (I'll have to take the word of my fellow meat eating blog readers) 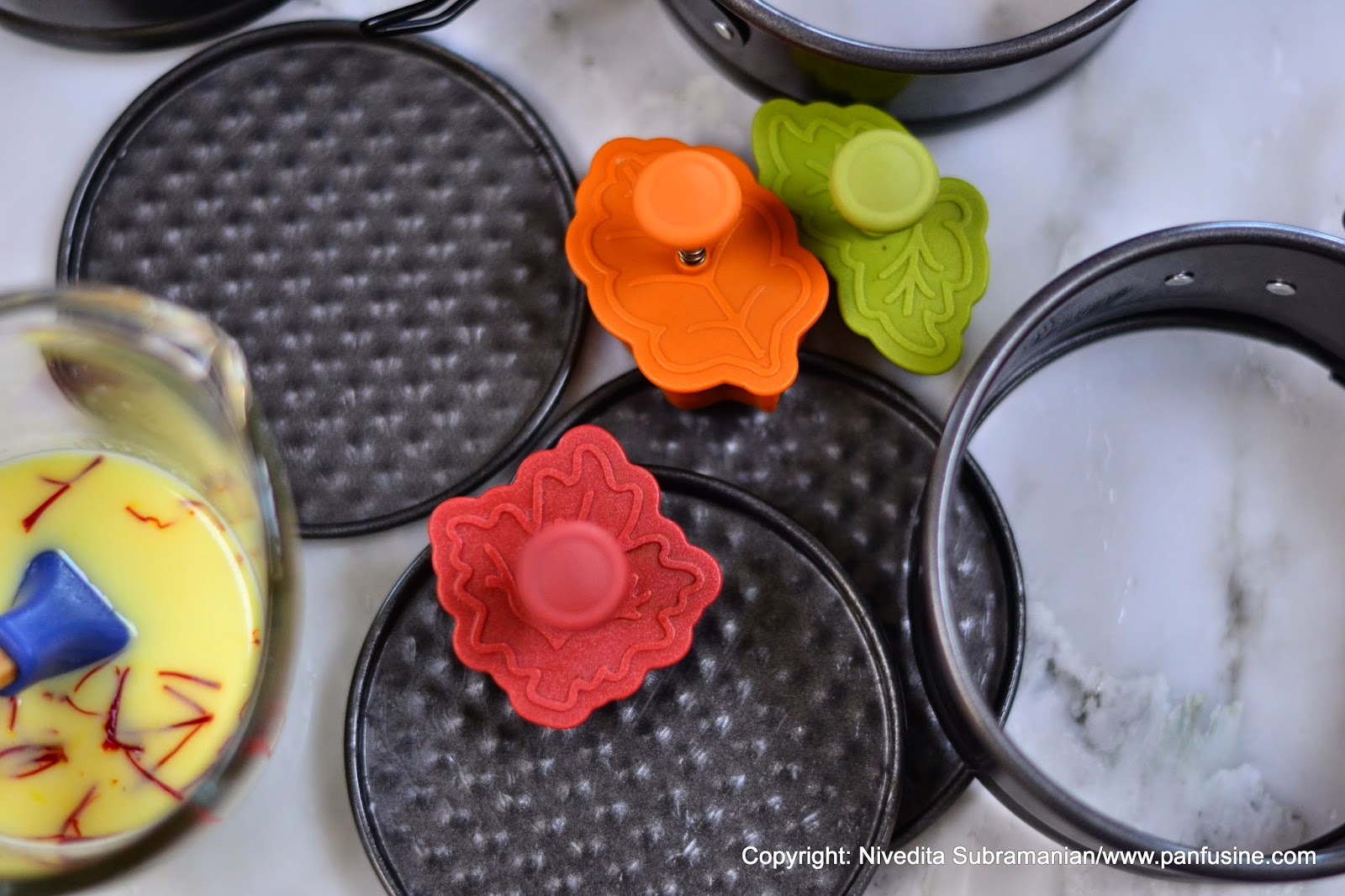 Although the original recipe calls for the addition of a beaten egg, the dough is quite rich enough that you can leave it out.

I decided to stick with the recipe completely but had to tweak it a bit since my son nixed the rose / Kevra flavorings as he doesn't care for them. So went with orange blossom water instead. Also was curious to see how the bread would fare if baked in a tin. I had some miniature 4 inch springform pans on hand that I put to good use. Pleasantly surprised that the dough rose up beautifully into a soft bread.

Whisk in the sugar and yeast in the lukewarm water and allow to stand for about 15 minutes till the yeast activates.

Sift the salt and flour together and add to the bowl of the food processor, gently pour in the yeast mixture and mix together. Next add the melted ghee and the grated orange zest gradually until the mixture resembles that of coarse bread crumbs. Now drizzle the milk gradually (as much as needed) so that the ingredients come together to form a soft and slightly sticky dough. Transfer the dough into an oiled bowl and allow to rise to double its original volume (~ 2 hours). 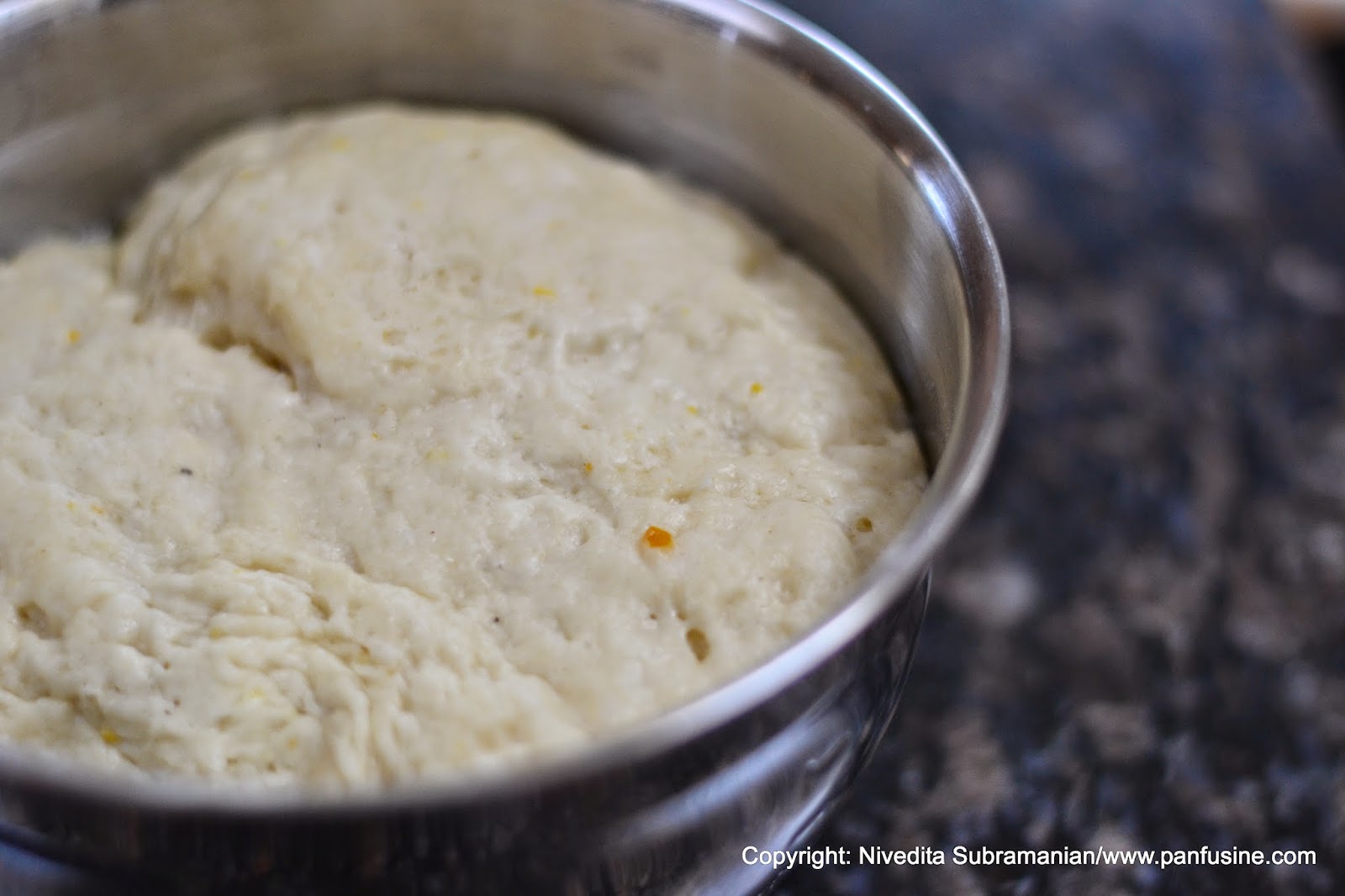 Punch down the dough and knead once again into a ball and keep covered for about 15 minutes more. Divide the dough into 4 portions and flatten them with your palm and fingers to a 4 inch disc. 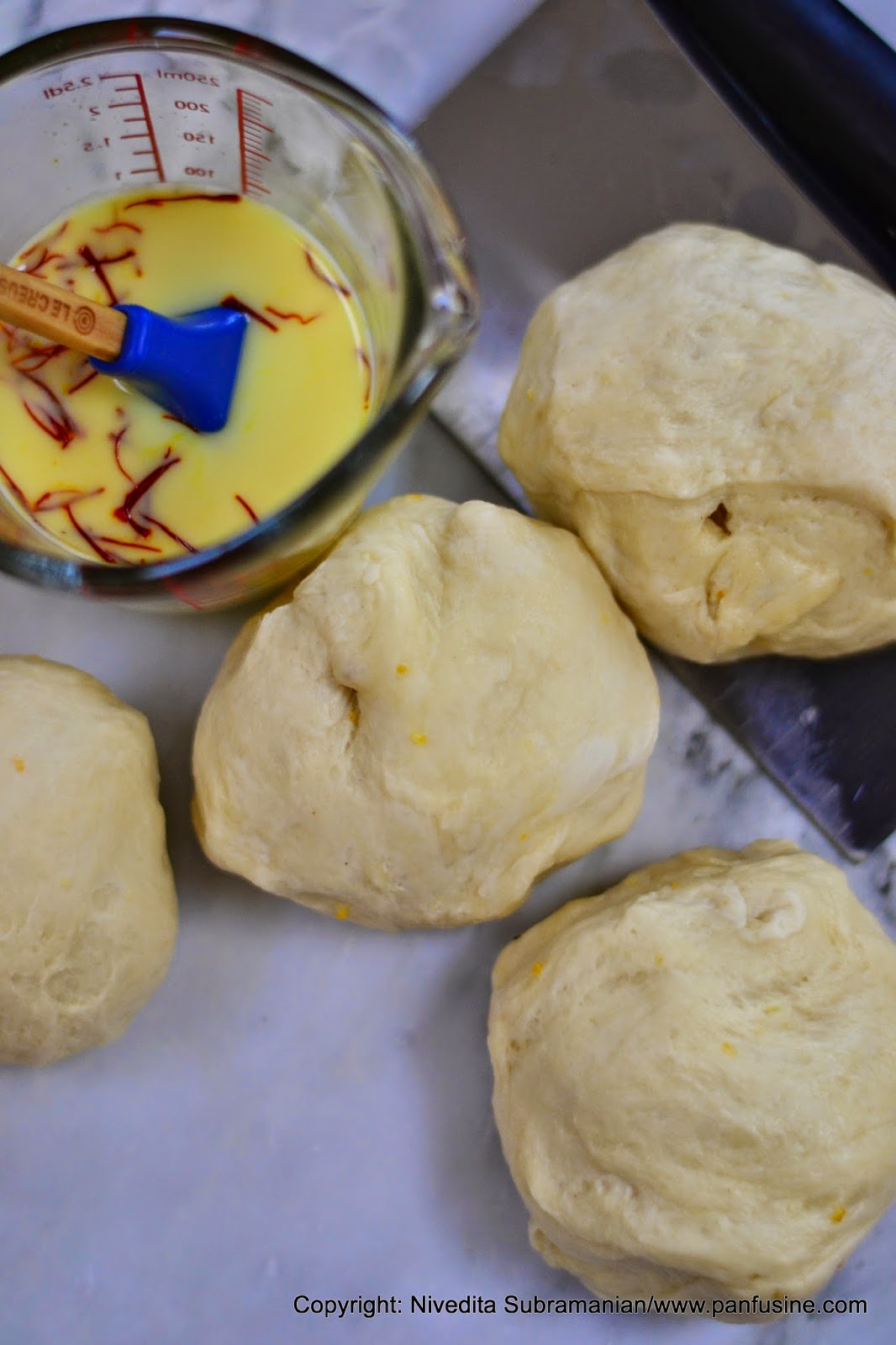 Place the discs on a baking tray lined with parchment paper. Alternatively place the portions into  greased 4 inch mini springform pans. Using a fork, dock (prick holes) evenly over the surface of the dough and brush liberally with the saffron infused milk. 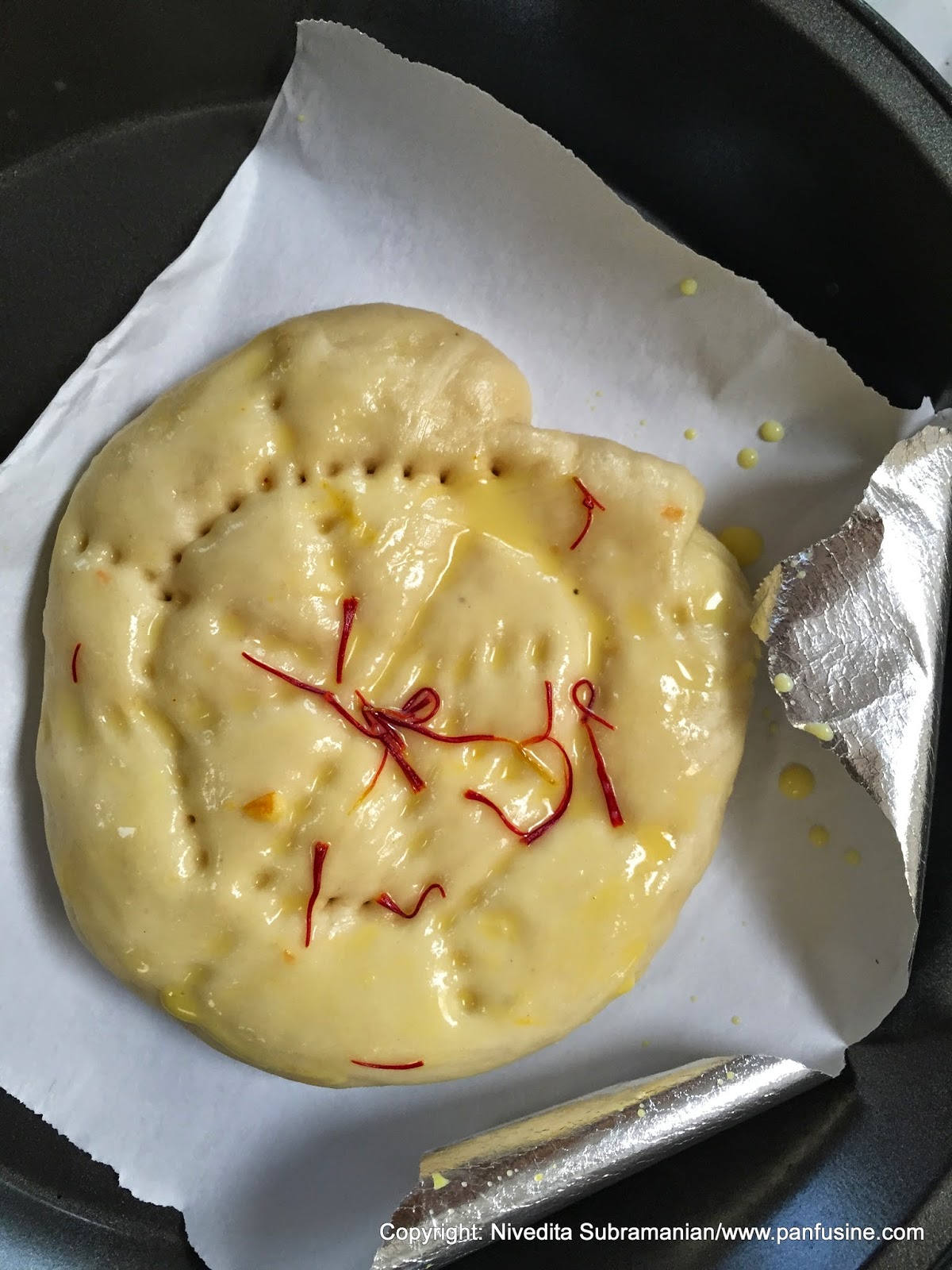 I tried pressing down with some cookie/pie cutters, but the pronounced depressions tended to smooth out during the baking process. 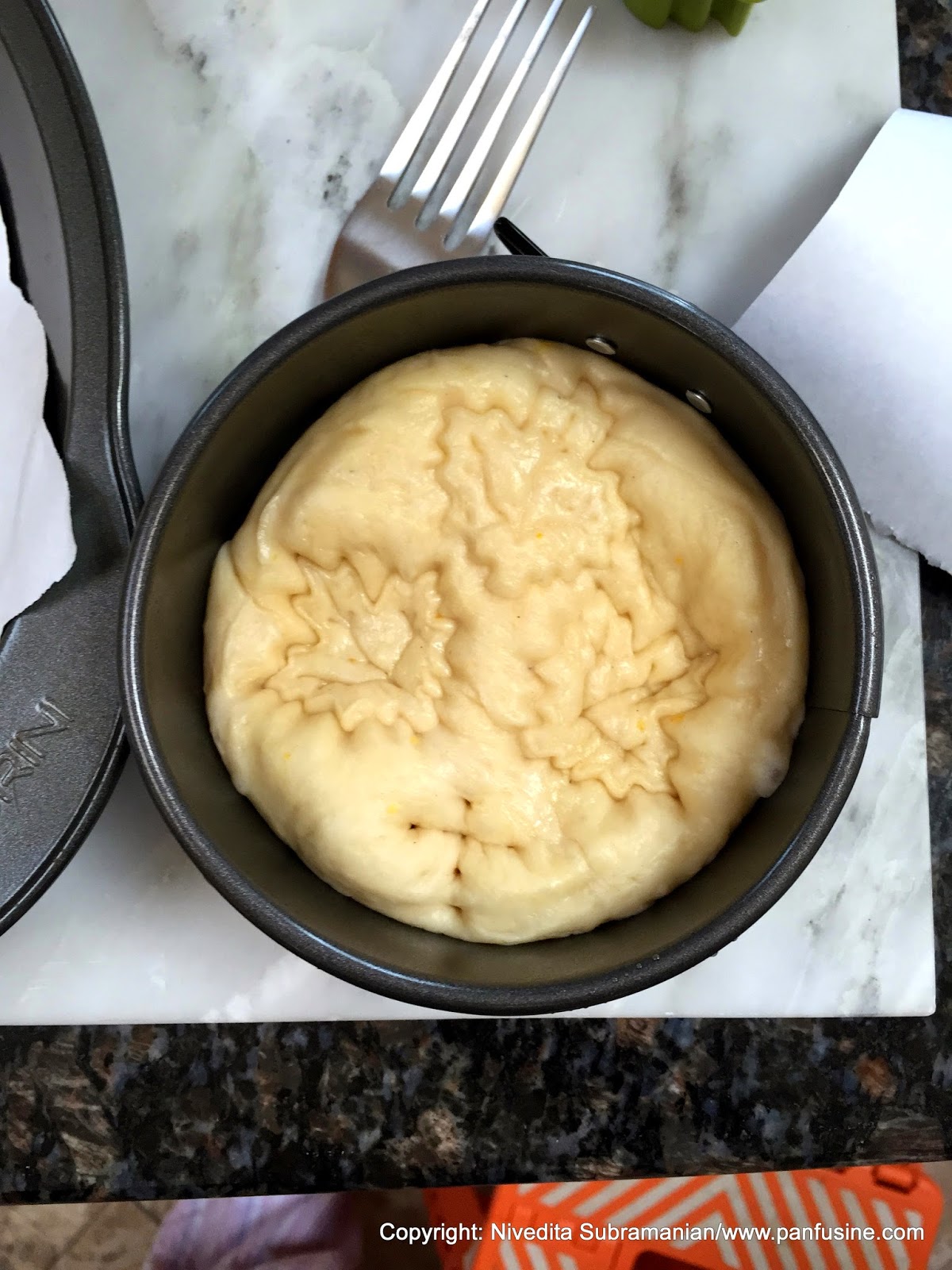 Bake at 350 F for 15 minutes till the top surface turns a golden brown. The pans required an extra 5 minutes. I left out the last step of brushing the breads with melted butter after they came out of the oven, not deliberately, but because I was nursing a blistered thumb from hastily yanking out a couple of heirloom cast iron pans (with wooden handles at that)  that had been stored in the oven! 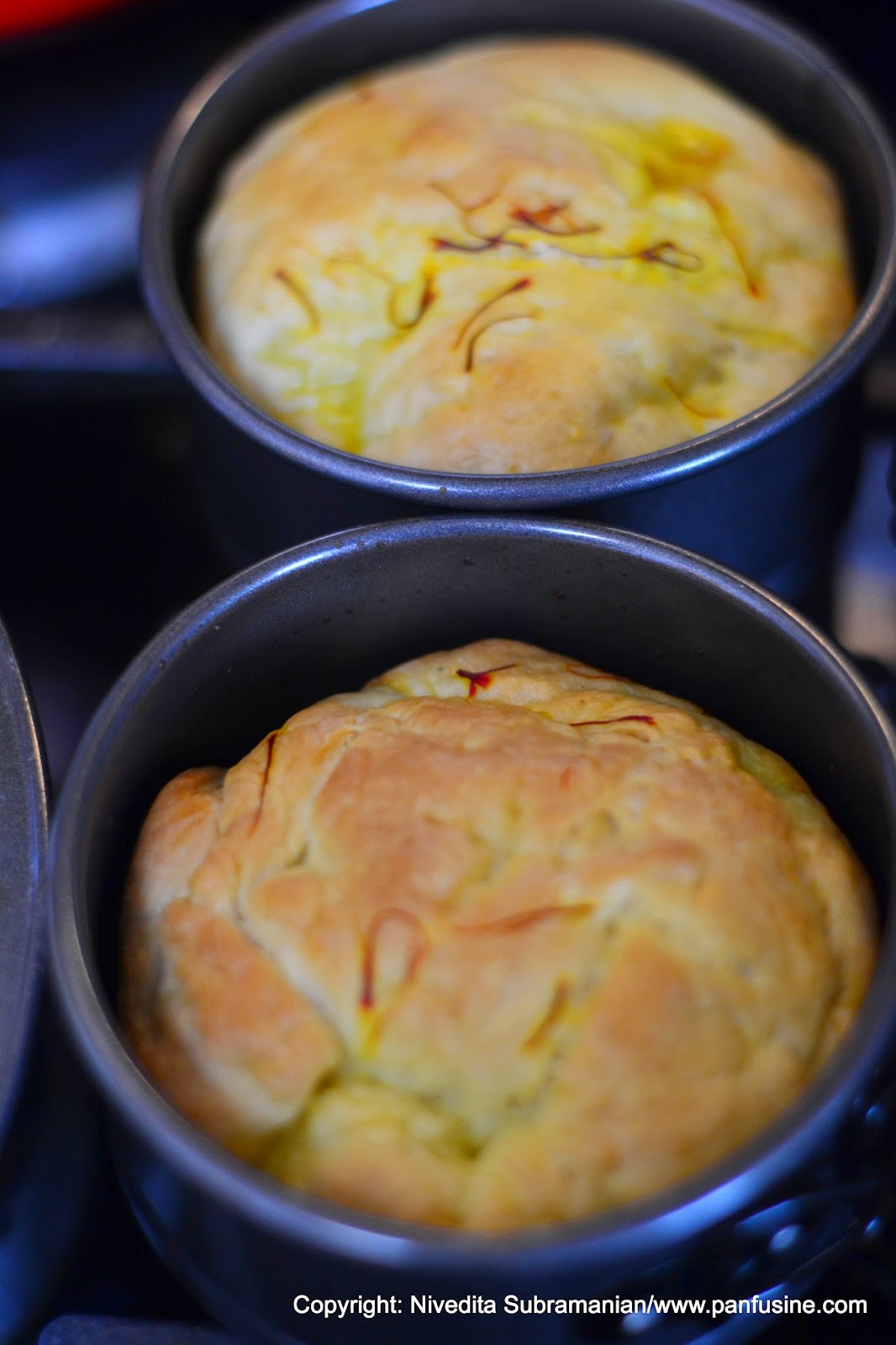 Instead of going the savory route I settled on whipping 1/2 a cup of heavy cream along with a few strands of saffron and 2 teaspoons each of honey & icing sugar. My 8 year old loved the whipped cream slathered onto the bread. 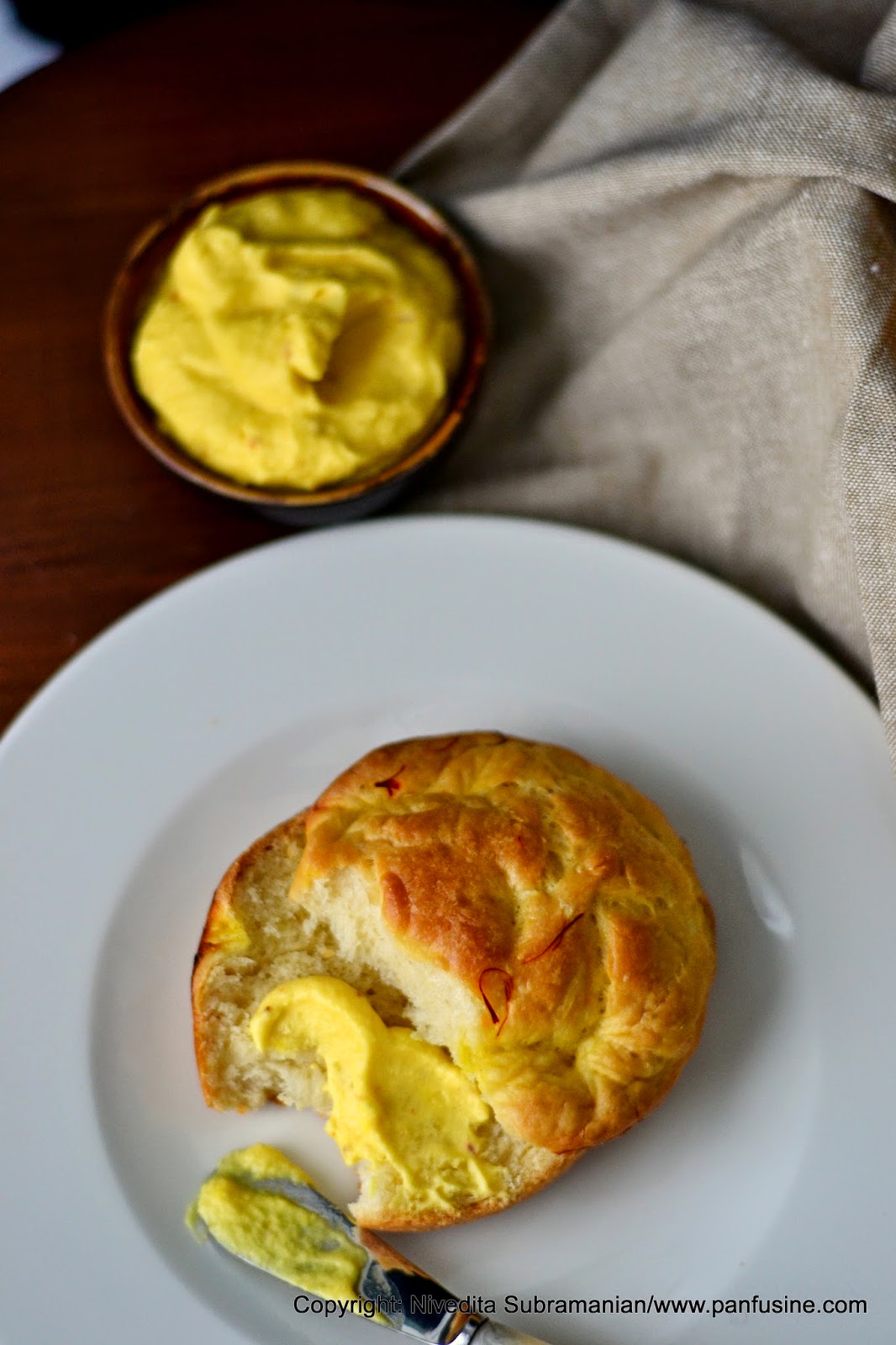 This recipe is being 'Yeastspotted.' 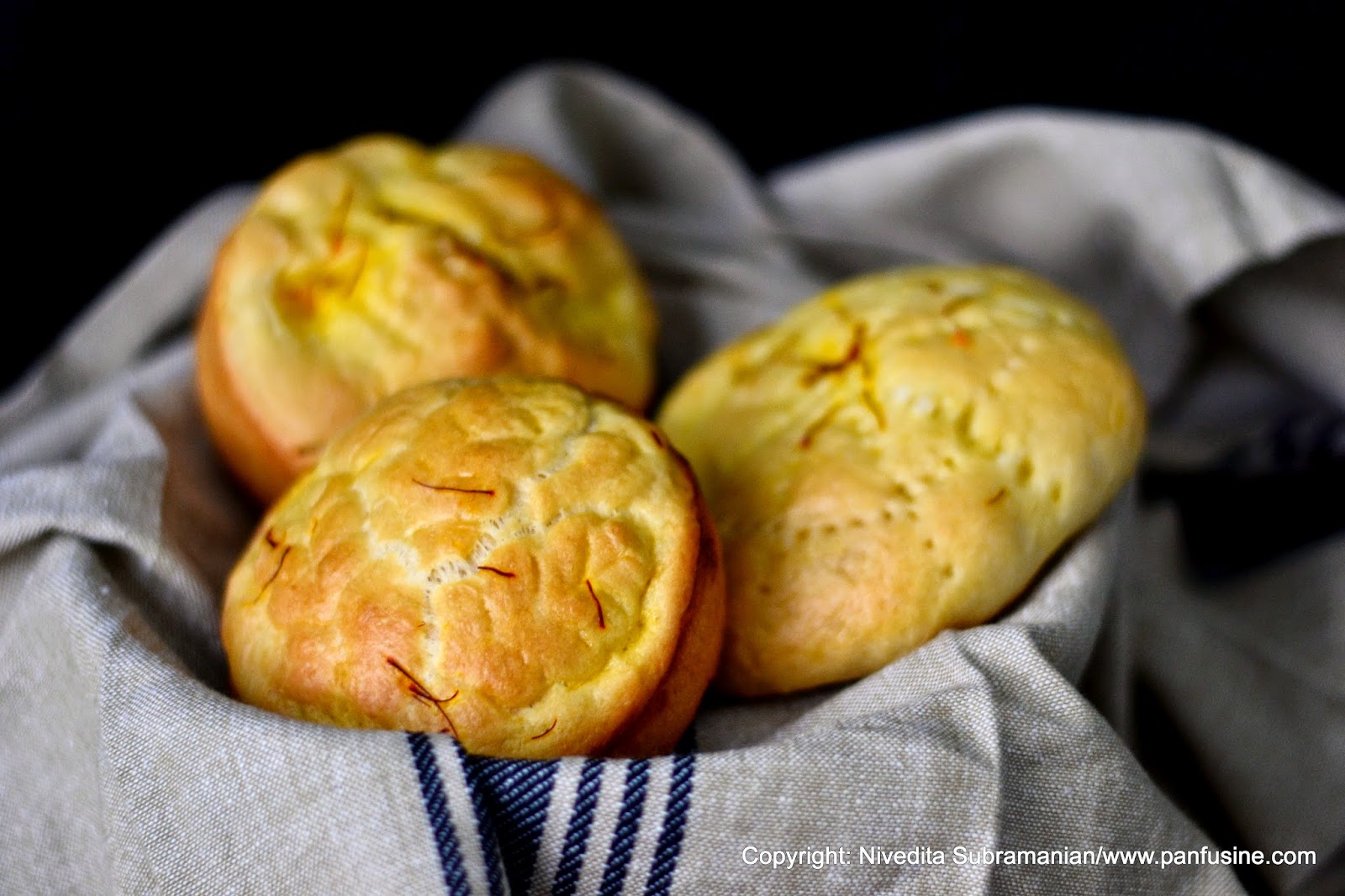