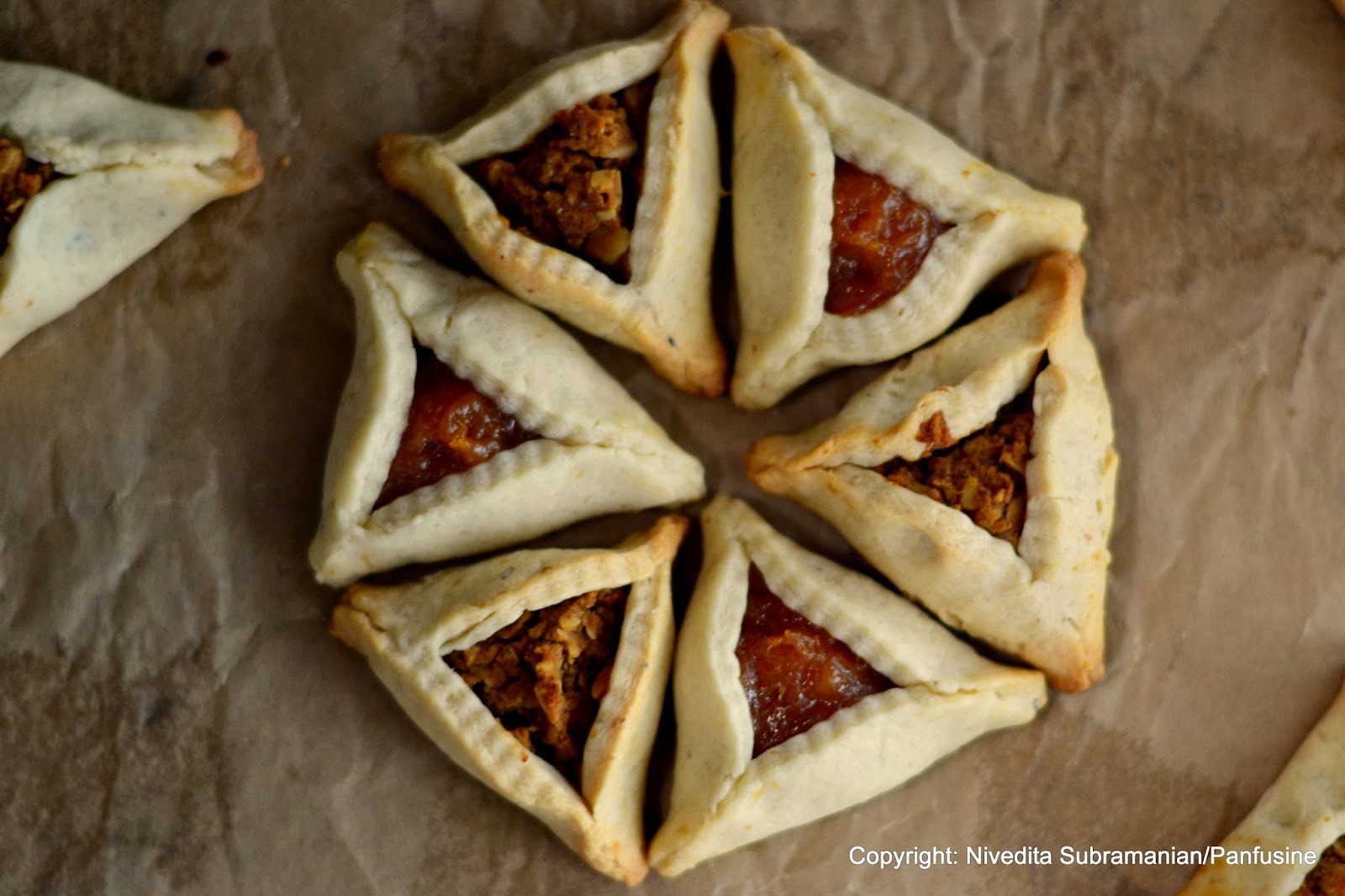 Here are two tales from a long time ago, about how goodness prevails and striking parallels about how the antagonists meet their fate at the hands of divinity. The first one is from the book of Esther , the story of Haman the evil.
Haman was the  vizier in the ancient empire of Persia at the court of Xerxes I. He plots to poison the kings mind, hatches a diabolical plot to exterminate Mordechai (a confidant of the king and an uncle of Xerxes' queen Esther) and other Jews who lived in Persia and in his arrogance, even builds gallows from which to hang Mordechai. His plans are foiled by queen Esther and Haman finds himself at the end of the noose he created for Mordechai. This deliverance from the evil Hamam is commemorated by the Jewish holiday Purim.

The second story, from the Puranas is that of Holika, the demoness. Holika was the sister of the Asura Hiranyakashipu. Their familial hatred of Vishnu was legendary and when Kamsa, the lord of  Mathura seeks her help in finding and destroying the infant Krishna (an avatar of Lord Vishnu), she eagerly accepts the challenge. Holika had the divine gift of being immune to fire and thus tries to immolate herself along with the infant. But alas, the scheme fails and the evil Holika gets incinerated.

Two tales, from two different religions, the striking similarity is that the antagonists each get finished off by the very tools they tried to use against their targets. Today, these festivals are even commemorated in similar ways via bonfires (this tradition seems to have existed as recently as the 1950s in certain remote parts of  Iran & Kurdistan). The foods that mark these events are the triangular Hammentashens, (the shape is supposed to represent Haman's triangular hat ) and the Puran Poli, a stuffed sweet griddle bread that is made for the festival of Holi in western India. Both these recipes consists of a stuffing enclosed by a dough covering.

The similarities were so striking from the parables down to the celebratory pastries that I had to give this idea a serious try, and it was a splendid success on my second try. The shell is an eggless version of that used in the traditional Hammentashen, while the filling is that used in the Indian Puran poli.  I also used some Jack fruit Pate as an another filling variation. 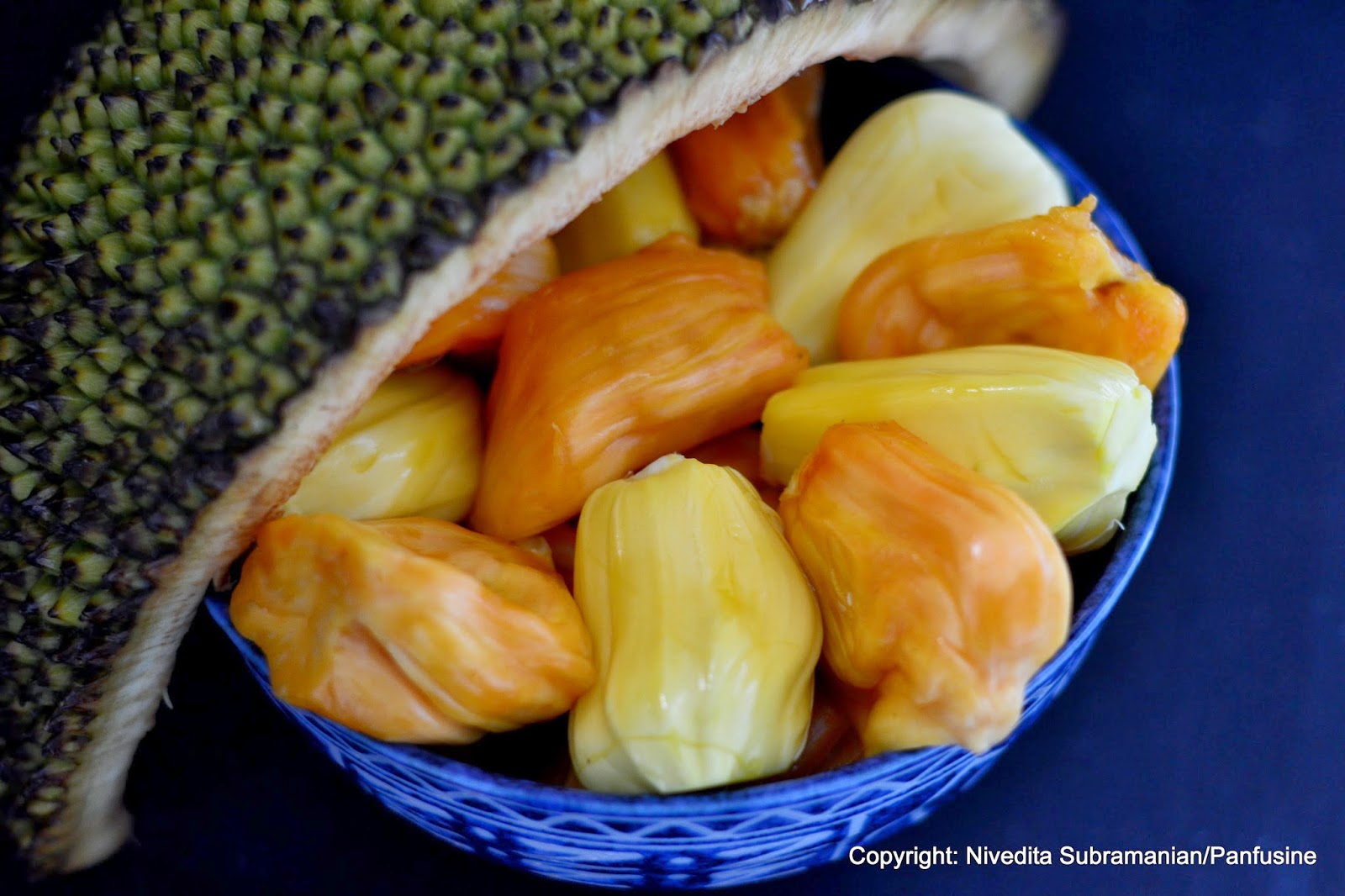 I'm not sure what to call it, so am leaving the naming of this to you, my readers.. Purim Poli or Holi-tashen?

Combine and sift  the all purpose flour,  baking powder, salt and cardamom. Whisk the butter and sugar until fluffy using a stand or hand mixture.Gradually add the flour mixture alternating with the milk until the ingredients come together. You do not have to use up all the milk. Knead the dough gently into a smooth ball. Shape into a disk and wrap with plastic film. Place in refrigerator for at least an hour until the dough is firm.

Combine the ingredients for the filling together and cook on low fire until the sugar melts and the mix thickens to a point where you can shape the filling with out crumbling. If it gets too dry, add a tablespoon of milk. 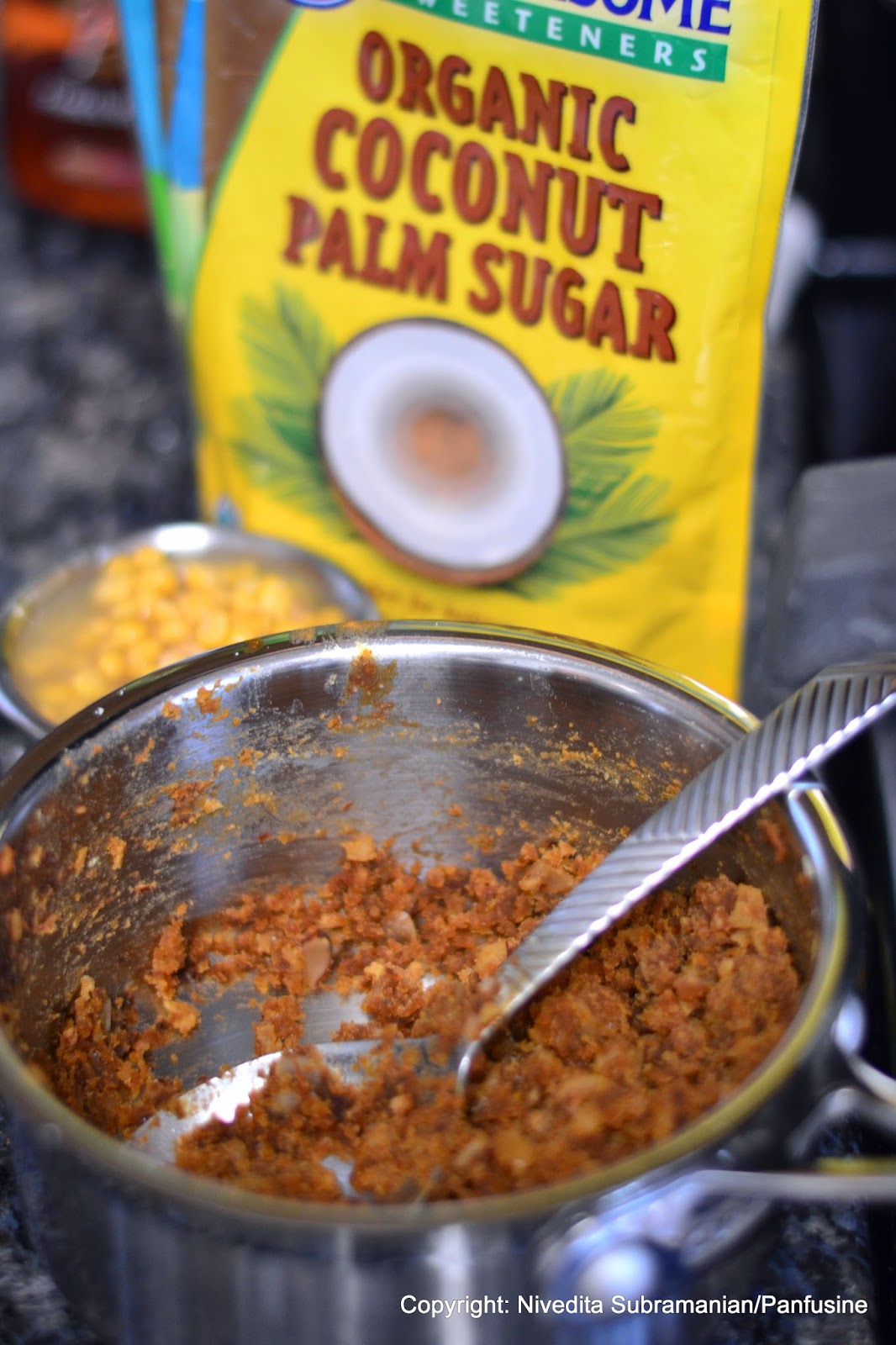 Cut the disk of dough into two and place one half between two pieces of cling wrap. 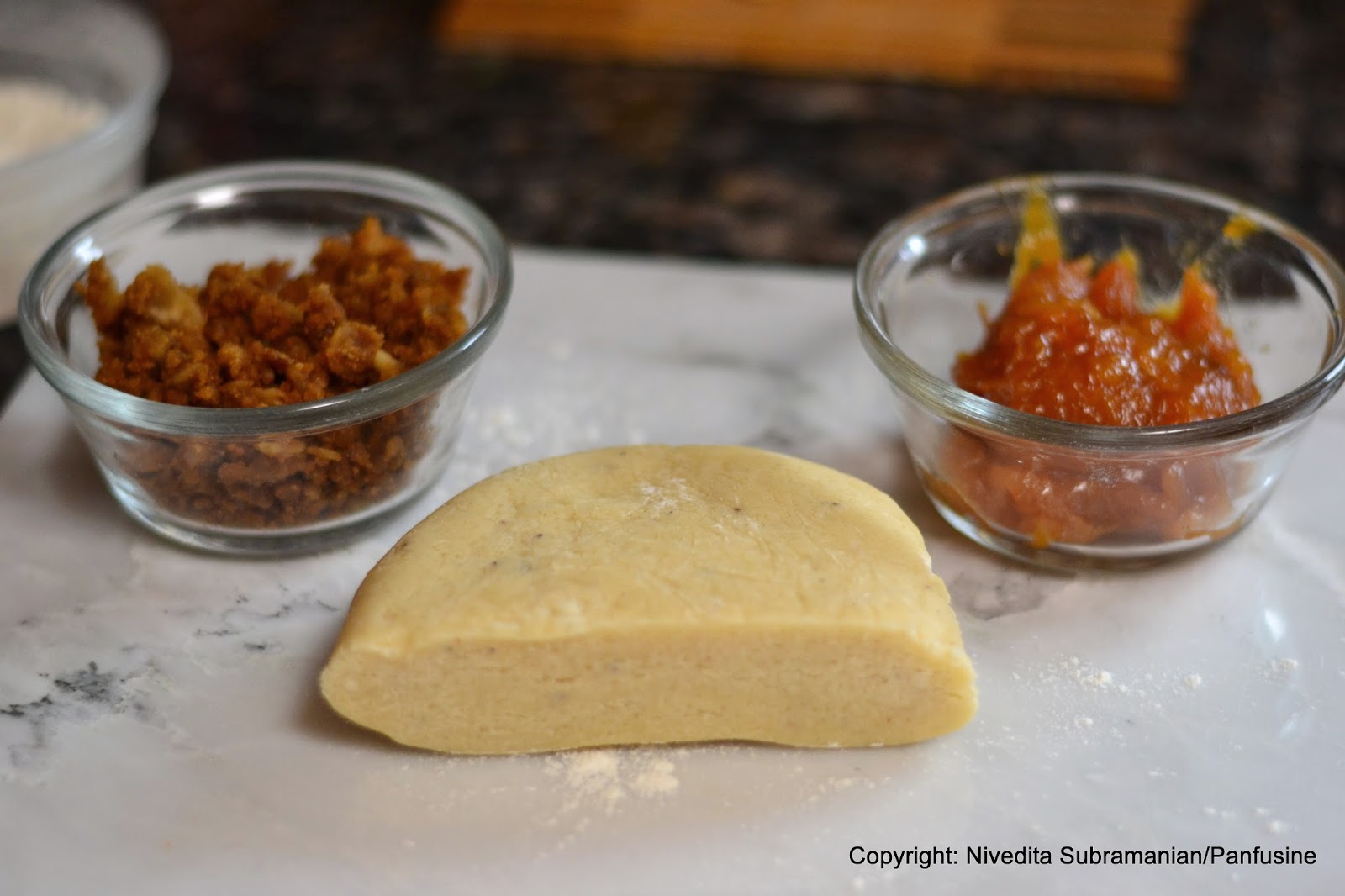 Roll the dough to approximately 1/4 inch thickness. Using a 3 inch diameter cookie cutter cut out circles. Carefully peel off the extra dough to be re used for the next batch. Place a teaspoon of filling in the center and bring the edges together and pinch the dough at the apices of the triangle. Use a drop of water to ensure that the edges are firmly sealed. 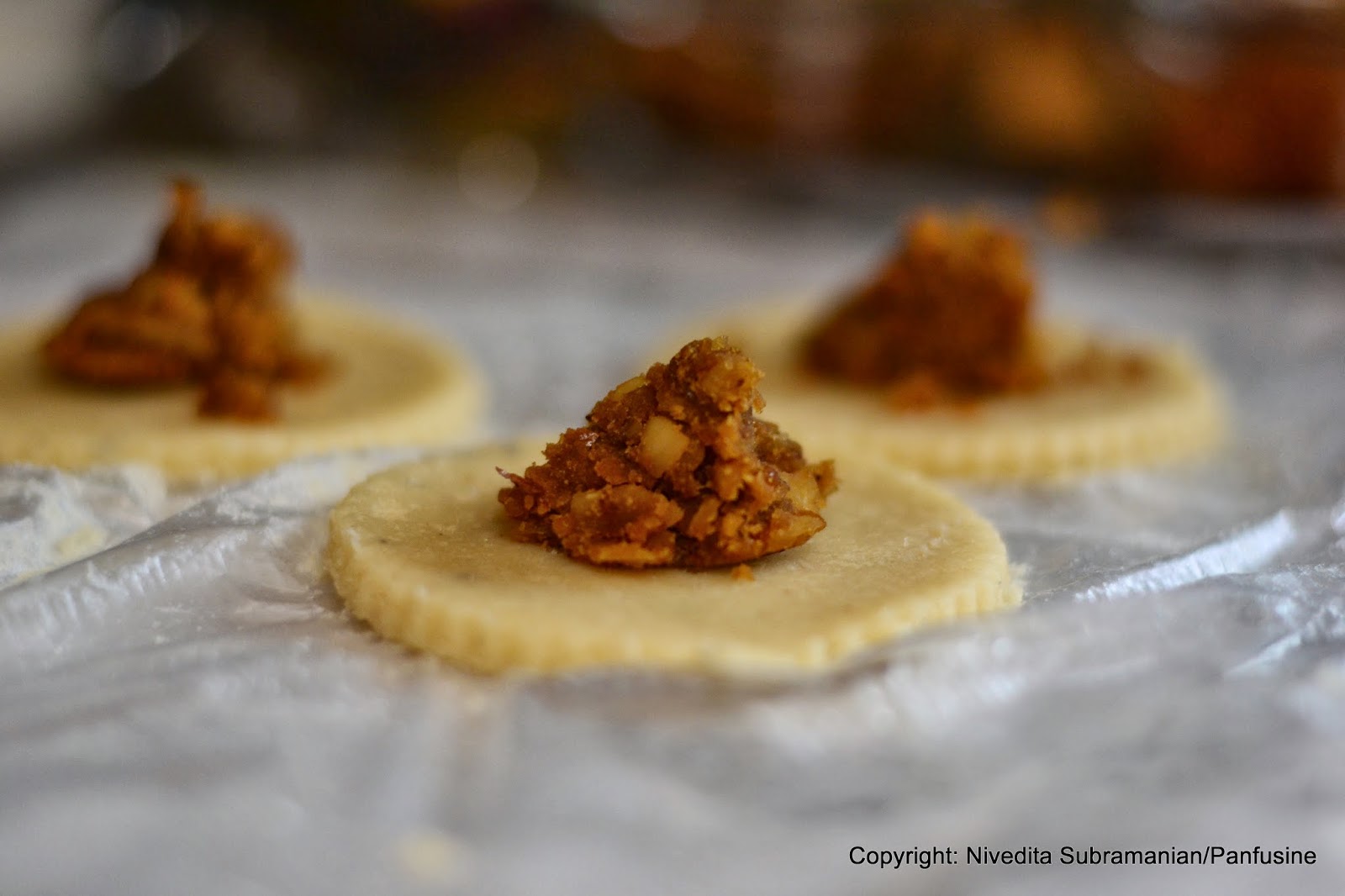 Place the pastries on the lined baking trays and place in the oven. After a minute, you might notice the dough beginning to unfurl. If this happens remove the tray from the oven and re seal the pastries. 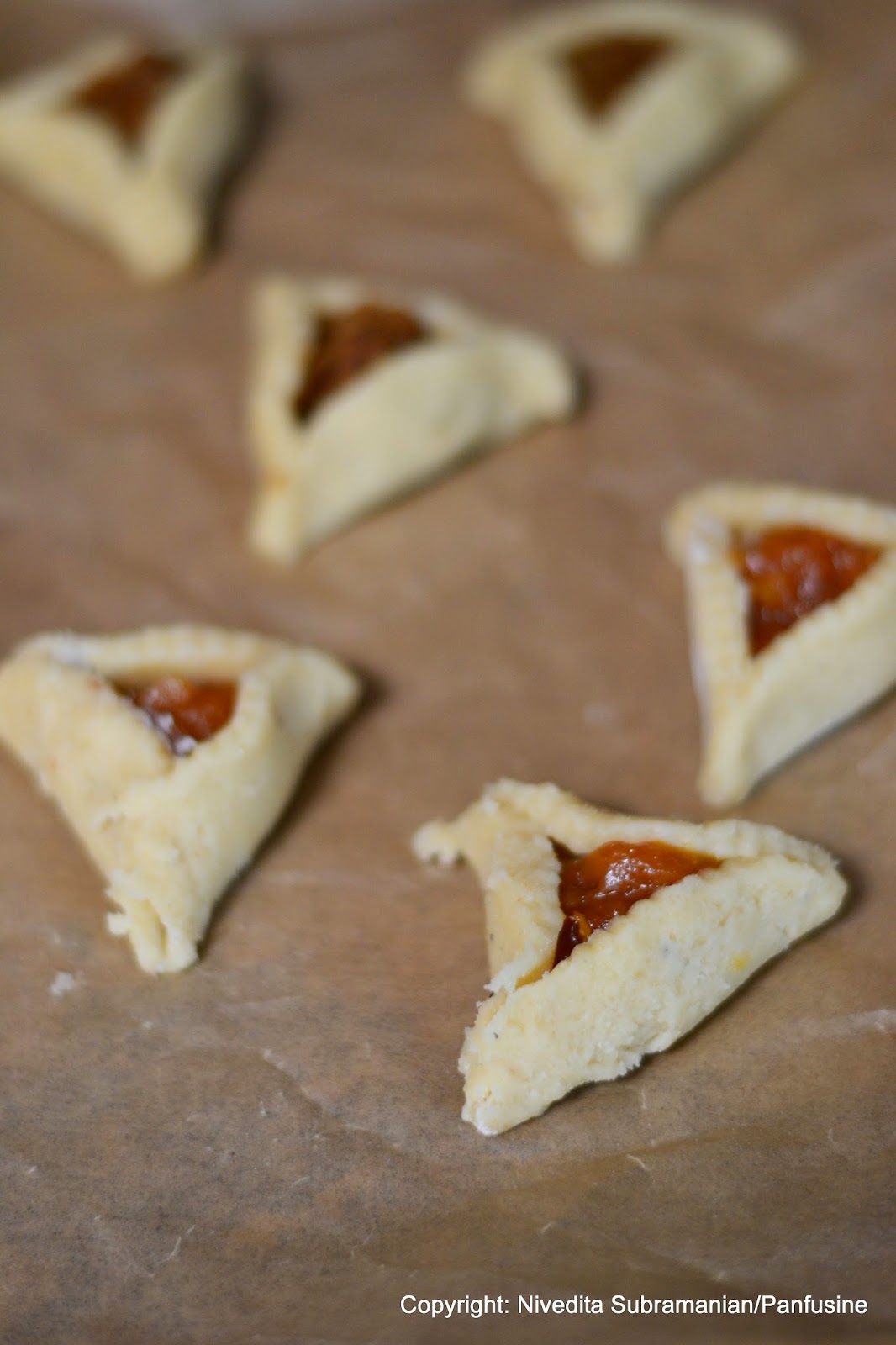 Bake for a total of 13 - 15 minutes.Remove the hamentashens from the oven and allow them to cool completely before popping them down the hatch! 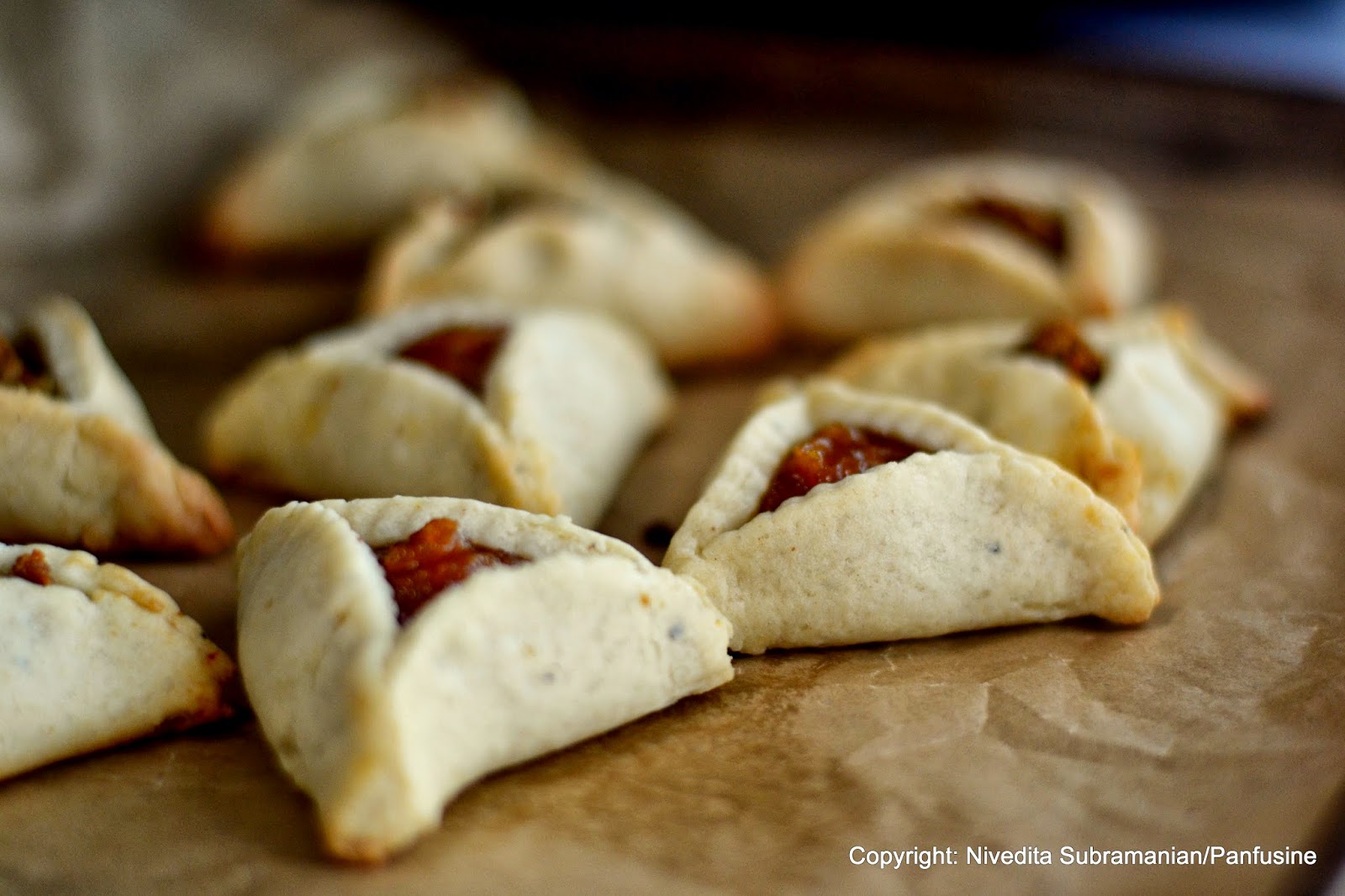