Validations, and a recipe for Berbere flavored Peas Pulao 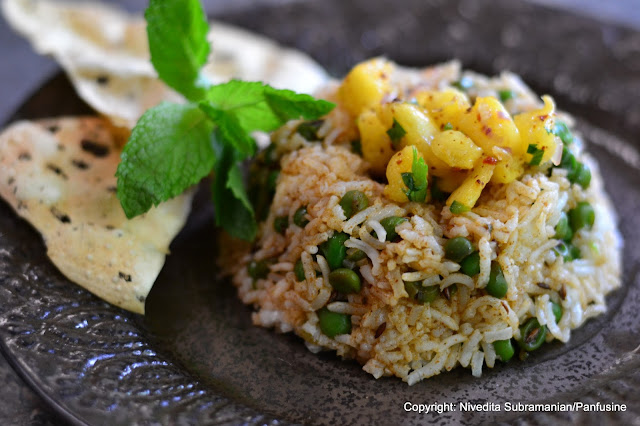 I've often been asked why I chose  into food blogging with a niche idea of redesigning and tweaking Indian dishes instead of plunging full fledged into classic recipes that I had grown up with. I had serendipitous stumble upon the best possible answer I'll probably ever get, thanks to Chef Marcus Samuelsson's new memoir 'Yes Chef'.

There was one paragraph that practically leaped out of the book searing itself into my mind :

" Who lied? Who started the lie that France had the greatest food in the world? That question ran through my head every time I bit into something new and that changed my notions of what “good food” is. Then that question was replaced by a second: Who’s going to make the people realize that food dismissed as “ethnic” by the fine-dining world could be produced at the same level as their sacred bouillabaisses and veloutes" - Marcus Samuelsson, Yes, Chef!

I could not ask for a better validation beyond this paragraph. In time, I've come to realize that my kitchen truly represents 'Panfusine' a space where spices & ingredients from all over the world are crammed next to each other, giving me the absolute freedom to pick and choose, without the limitations that cultural biases impose. This freedom has also given me an increased appreciation for the classic dishes and ingredients I grew up with, whether it is to lovingly prepare a 'Pongal' the traditional slow cooked way (albeit in a Le Creuset Risotto pan), savoring the burst of aroma emitted by the crushed curry leaves, ginger, Cumin & Pepper tempered in ghee, or savor the musky heady aroma emanating from an old box that I use to store my blocks of asafetida.

Speaking of asafetida, One of the most spectacular dishes I've seen this pungent spice used in was in a pineapple salsa,  Ammini Ramachandran's recipe in Zester Daily. Simply follow the link and give this a try, you'll love it!

The only hitch most people have with pineapples is the prepping. The cutting through the scaly peel and then scooping out all the 'eyes'. Well, discovered that OXO has an answer to that. A nifty ratcheting pineapple slicer, As  someone who loves prepping difficult fruits, I was initially skeptical about how this implement was going to take care of peeling, coring AND slicing in one shot, but believe me, it does, and beautifully so. 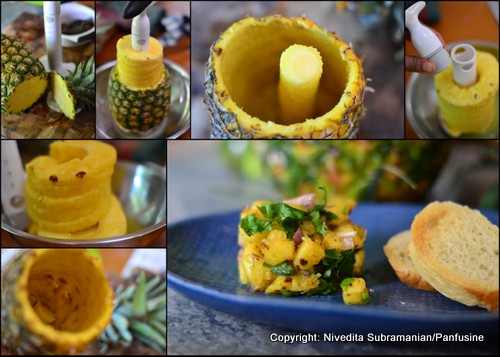 and if you still want further proof, just watch the video!


I paired the Salsa with a spiced rice that I put together a casual weekend dinner. The intention was to make a simple spiced Peas Pulao spiced with garam masala, but as is usually the case, I always end up including a spice blend from almost anywhere else in the world, and the result is always delighful. This time it was Berbere (bayr - beray) , the Ethiopian spice blend, an amalgam of over a dozen spices according to Marcus Samuelsson,  (Coriander, Cumin, cardamom, nutmeg, ginger, cloves, chile pepper, salt, peppercorn, allspice, garlic, cinnamon, fenugreek and ajwain). 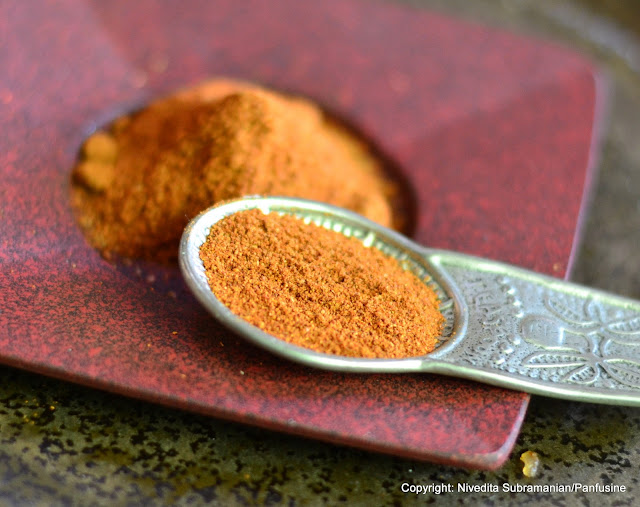 I deliberately kept the vegetable list confined to peas, in order to keep the dish simple. 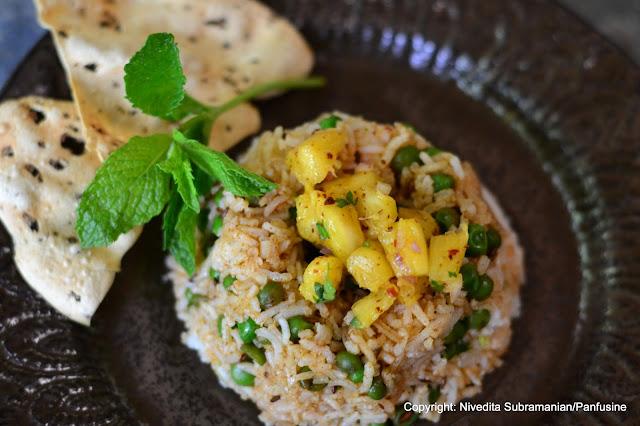 
A big Thank You goes to OXO for letting me try their wonderful Pineapple slicer. I've had readers buying it even before I wrote up this post.