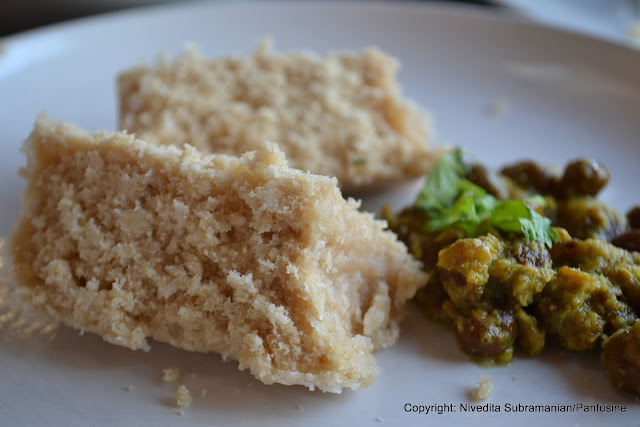 Continuing on my final spin, I've finally been able to muster the courage to tackle a dish that I've been secretly so in awe of. I'm referring to that classic Kerala dish - Puttu , A steamed cake made with fragrant toasted rice flour and coconut. The dish requires a specific tool to make it. An instrument called a 'Puttu kudam' which is essesntially a little container fitted with a cylindrical inset that holds the rice flour and coconut mix. Traditionally, Puttu was steamed in bamboo logs which conferred a unique vegetal flavor. For more details about Puttu, just follow this link to Ammini Ramachandran's guest post in Shalini's blog 'A Cookery year in Coorg'.

It may be that I put off making this signature dish simply because I did not have the required tools. The realization that I may have serendipitously stumbled upon a perfect hack, just means that I won't be craving a puttu kudam even if I came across it in a store. (naah, I'll still probably invest in one but not quite in such a hurry)

I've had this Tea infuser from Teavana sitting in my kitchen for ages. I picked it up at one of those after Christmas sales a couple of years ago for five bucks. Recently I've been putting it to good use, and  there it was, sitting on my counter when I hit upon the idea of using this to  steam the puttu flour blend. And it worked, PERFECTLY! 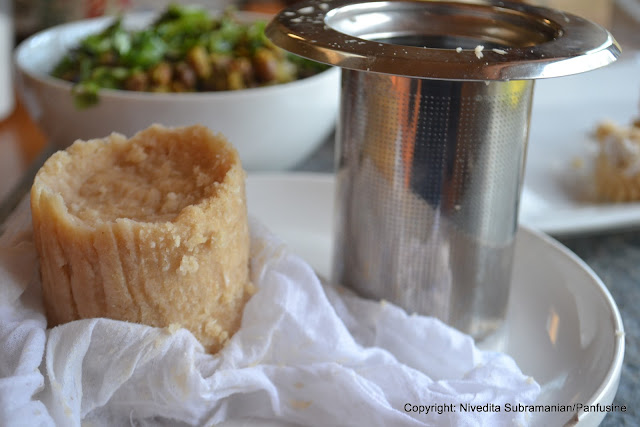 I'm simply going to cut and paste the recipe for Kadala Curry from Mrs. Ramachandran's post. I simply followed the recipe to a T and it is perfect!.. Just like all of her other recipes! 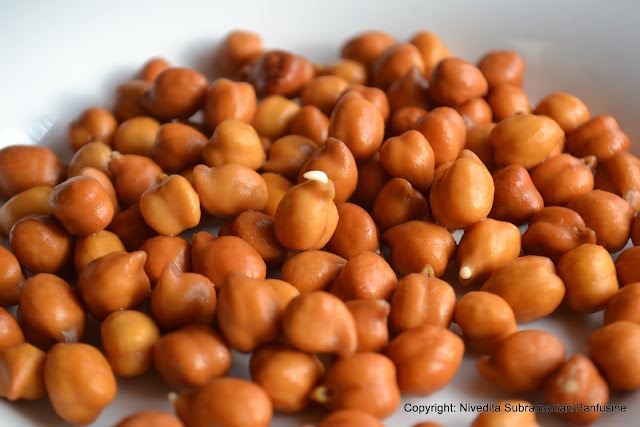 Soak chickpeas overnight in plenty of water. Rinse in several changes of water until the water runs clear, and drain. Place the chickpeas in a saucepan with four cups water and the turmeric powder, and bring it to a boil over medium-high heat. Cook until the chickpeas are very tender, approximately fifty minutes to one hour. Alternatively, you may cook the chickpeas in a pressure cooker (following the manufacturer’s instructions) for six to eight minutes to speed up the process.
Heat half a tablespoon of the oil in a skillet over medium heat, and fry the grated coconut, stirring constantly, until it turns golden brown. Add the coriander seeds and red pepper, and fry for another minute or two. Remove from the stove, and let it cool. In a blender, grind the coconut and spices with just enough water to make a thick, smooth puree. If there is excess water in the chickpeas, drain some of it. When the spice puree is stirred in, the curry should be fairly thick. Combine the spice puree and the chickpeas, add salt to taste, and simmer for six to eight minutes.
Heat oil in a skillet, and add the mustard seeds. When the mustard seeds start sputtering, add the halved red chili pepper, asafetida, and curry leaves. Remove it from the stove, and pour it over the kadalakari. Garnish with thinly chopped cilantro leaves. Cover and set aside for ten minutes, to allow flavors to blend. Serve hot with puttu. 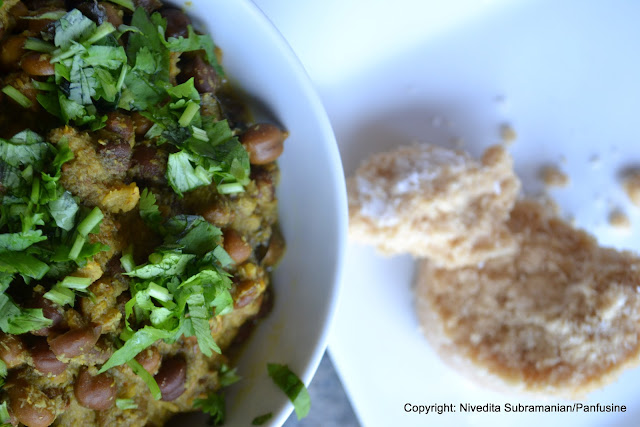 In a heavy skillet, dry roast the rice flour over medium heat, stirring continuously. After about five minutes remove from the stove, and let it cool.
Add one cup of the grated coconut and salt, and mix well. Sprinkle a half-cup of water over the flour, a little at a time, and mix well.
(The trick in making real soft puttu is in the moisture content of rice flour. The rice flour mixture should be wet but not lumpy. Take a little of the flour mix between your index finger and thumb, press gently and let it fall gently. If it holds its form as it falls, the flour is damp enough. )

Stir in the ghee. Though not called for in the traditional recipe, it adds to the flakier texture of puttu.

In a deep saucepan, add about an inch of water and place a steamer basket over it. Line a Tea infuser (the large cup shaped ones) with a moistened piece of cheesecloth . Fill halfway with the rice and coconut mixture. Layer a tablespoon of fresh coconut. Fill up to the top with more of the rice and coconut mixture. Fold over the flaps of the cheesecloth.. Place the infuser over the steamer basket. Cover the saucepan and steam for about 10-12 minutes. 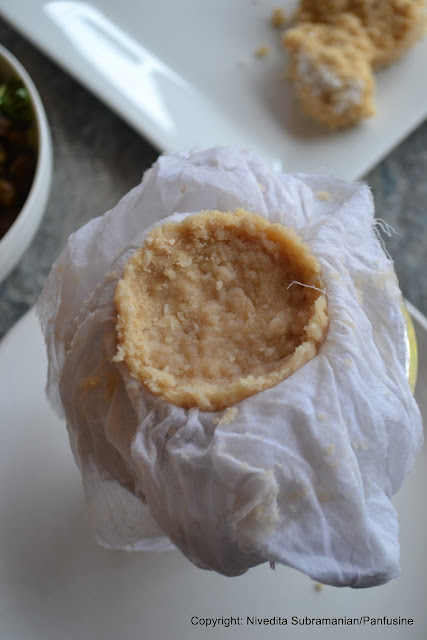 Once the infuser has cooled down enough to be handled, gently pull out the cloth from the infuser and 'unwrap' the puttu.


Cut the log into wedges (or simply crumble it up lightly),  Add a generous dollop of Kadalakari and serve warm. 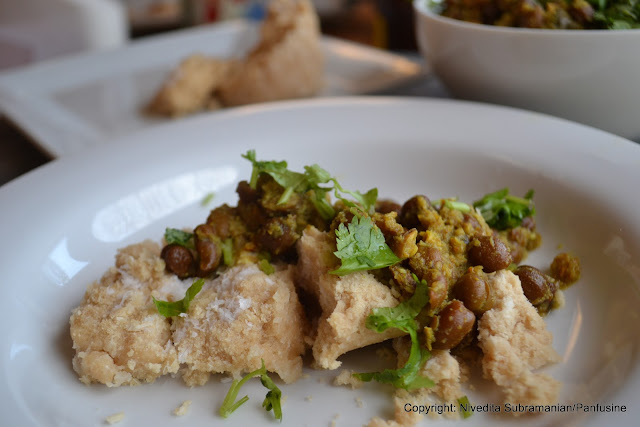