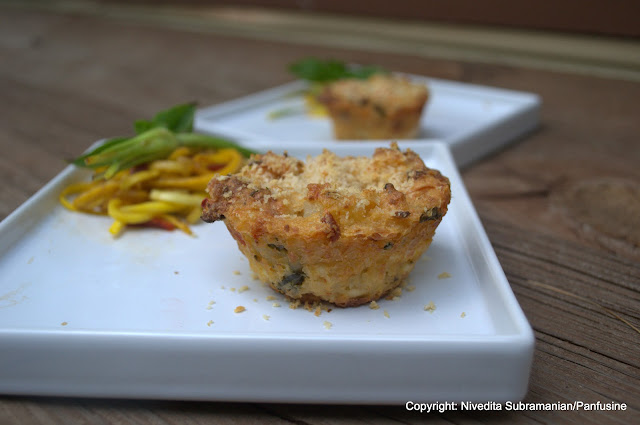 In the middle of repetitive daily chores, that go by week after week, there suddenly pop up opportunities that one must simply take advantage of, or else spend the rest of your life regretting it.

As you've probably figured out, I'm completely hooked on to Food52. Its not just the recipes, the contests and the little bantering corner for exchanging ideas that they refer to as the 'hotline' (previously known as the food pickle). Its a community of friends I've gained online, most of whose names & faces I have no idea of since most of us go by our usernames online, & yet, my eyes widen in delighted anticipation at their comments, suggestions & recipes.

One of the most dedicated food52 members, I've met on the site is KitchenButterfly who has contributed  a number of fabulous recipes,  including the delicious Chocolate Granola bark.

Two months ago, KitchenButterfly  had mentioned that she would be flying into New York City from her native Nigeria and would like to meet up. And meet up we did, on June 24th at Eataly in New York City.

So there I was at the espresso counter, sipping a beautifully crafted single, peering into passing faces looking for that flicker of recognition. Soon enough, someone came up to me asking if I was a food52 member.. BAM.. The party had begun!! 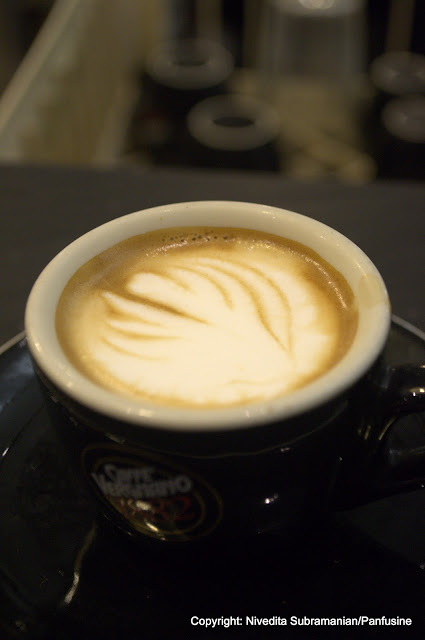 Within the next 1/2 hr, we were a group of five introducing ourselves by our real names, and chatting away like we'd known each other for ages (which in a sense we did). After stepping out to see the Parade outside, just in time to see Senator Charles Schumer walk by waving a rainbow flag. we returned to Le Verdure, the vegetarian restaurant at Eataly.


This company & the restaurant simply rocked. We had a wonderfully informative waiter who explained the dishes on the menu in such details that it was hard to pick and choose. but pick we did. 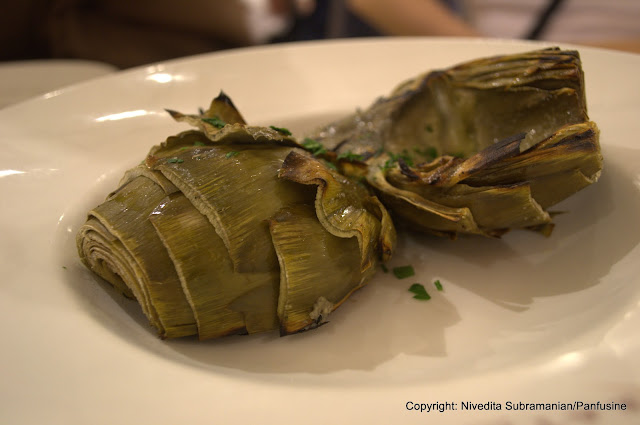 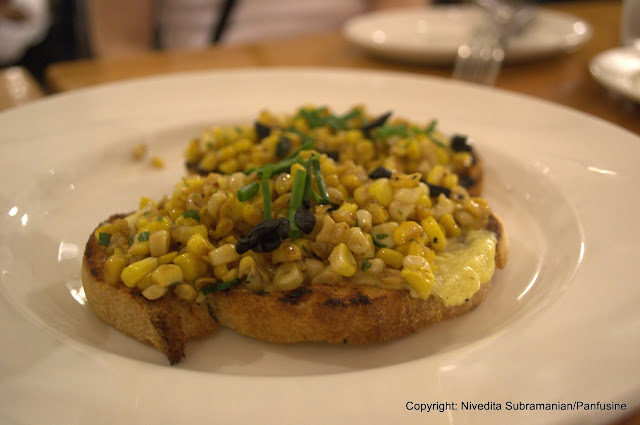 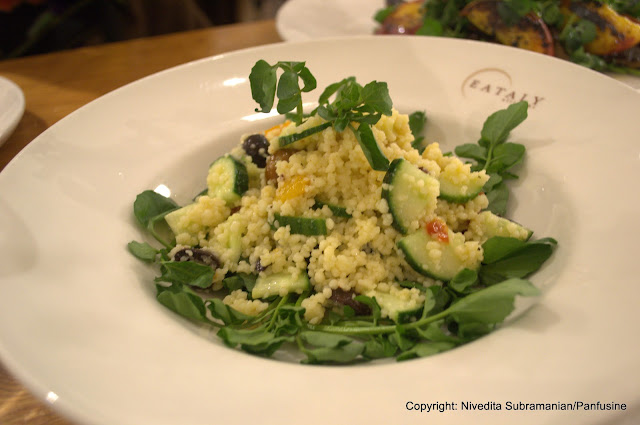 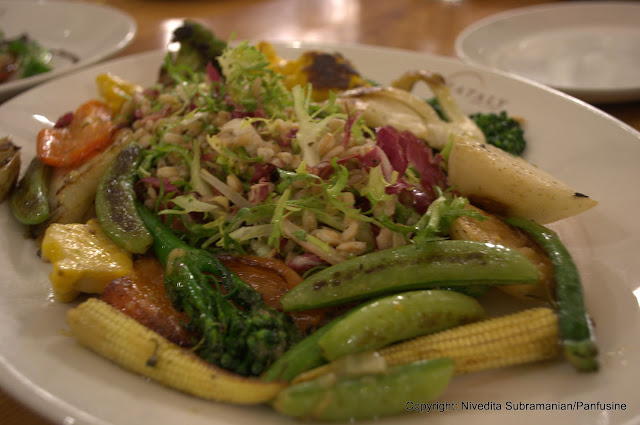 Verdure a la Piastra - A selection of grilled veggies with a Farro Salad. 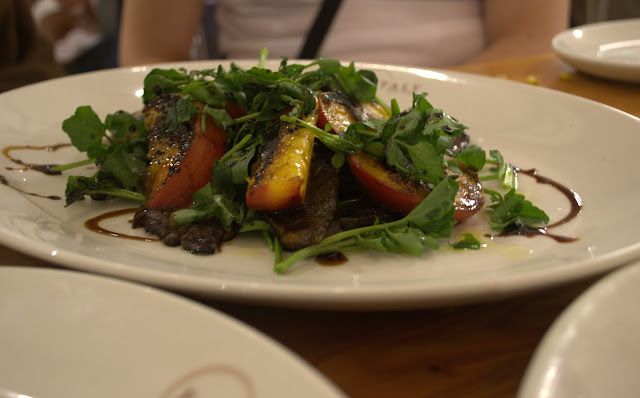 and the best dish of them all.. 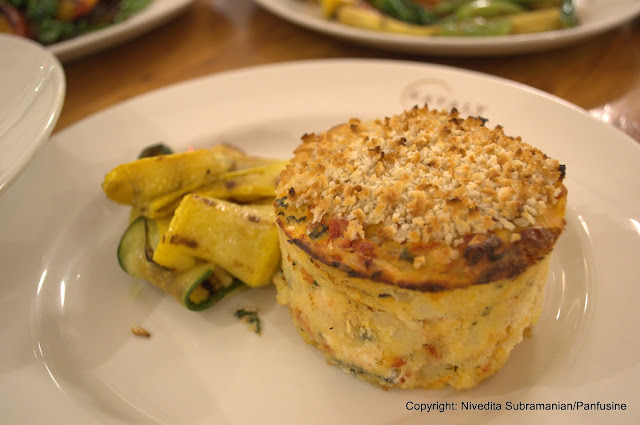 Gatto de Patate - Baked potato cake. with marinaded & grilled Zucchini. As superb as everyone of the dishes were, this one literally took the cake. Crunchy shell, giving way to a creamy cheesy filling (of Mozzarella and Pecorino Romano ) flecked with sundried tomatoes and basil. Just could not stop thinking about this divine dish, that I simply HAD to come home & try to 'reverse engineer' it.

My version did not match the flavors to a T as the original version, but did mimic the textures rather accurately. I must admit I went off track adding my own flavors as I'm wont to do, but the end result was pretty delicious.

Preheat the oven to 350 F. Boil & peel the potatoes, crumble into small bits and add to a large mixing bowl. Grease a muffin tin with butter (or alternatively use 10 ramekins (1/2 cup volume))

In a saucepan, melt the butter. once it begins to turn brown, add the flour and toast to make a roue. Add the skim milk, whisking the mixture to avoid any lumps. Season with salt, pepper & the chile flakes. Add the cheeses gradually, stirring all the while. Add the sundried tomatoes with the saffron and heat gently until the cheese melts.

Add this mixture to the crumbled potatoes and fold in to combine, along with the chopped herbs and breadcrumbs. Lastly, fold in the whipped cream.

Using a large ice cream scoop, portion out the potato mixture into the muffin tin / ramekins. Bake in the oven for 30-35 minutes rotating the tin halfway through the baking process. 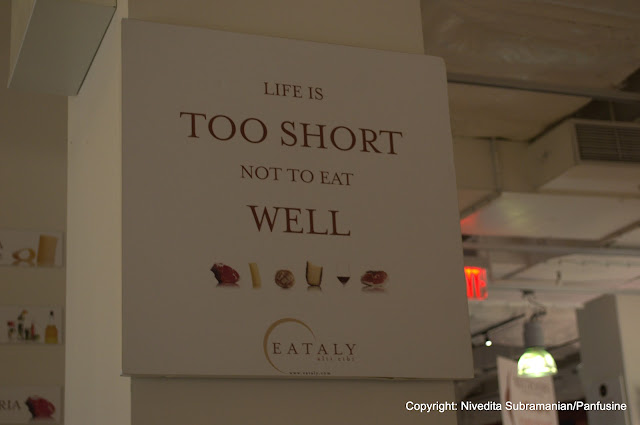