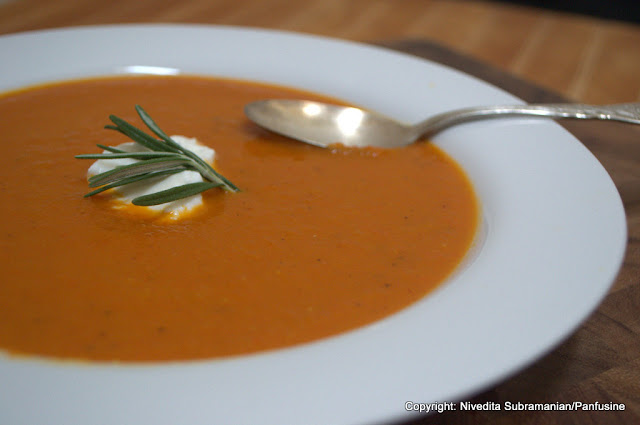 I'm not really all that much into making soups, unless its for a relaxed winter afternoon, curled up in front of the idiot box, watching a mindless movie. It just seems too much work for something that gets slurped up with the speed of a cup of coffee. The bonus that many soups offer is that the same set of veggies used can be literally split up into two dishes, and hence zero waste in terms of ingredients & flavors and its quite a bit of fun to play around with seasonings to get two completely unrelated flavor profiles from a single source.
I've shied away from carrots as a soup ingredient long enough, and in the process missed out on that earthy incomparable flavor  touched with a dollop of caramelized sweetness, that somehow annoys me unless I completely smother it with spices. The trick is to balance the tastes to get that incomparable sweet & spicy earthiness that  makes this weeks recipe(s) a complete keeper!

The soup is a  roasted carrot & golden beet soup (with chunks of fresh ginger thrown into the roasting mix). the spicing ingredient is the North African spice blend Harissa (which I use in the powdered form rather than the paste.  Kalustyan's in New York City, sells a variety of different brands, both in the paste & powder form) 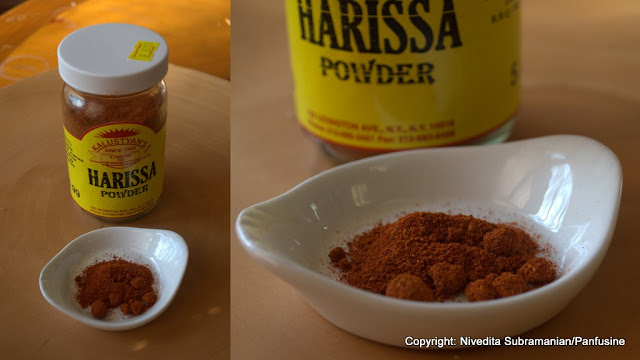 Harissa is one of the most versatile spice blends you can stock in your pantry. This particular variety, I've even added some salt & sesame oil  to pair it beautifully with  South Indian Dosa. It makes for a delightful variation of the traditional 'Milaga podi' a.k.a 'gunpowder'.

Preheat the Oven to 400 F. Line a large baking tray with aluminum foil.

Wash, peel & cut the carrots, golden beets & Ginger into 1 inch cubes. add to a mixing bowl along with the grape tomatoes and 2 tablespoons of the olive oil.. Season with Salt & freshly cracked pepper. 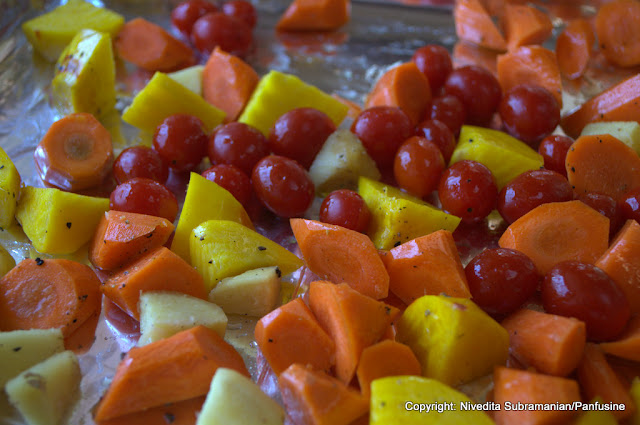 Add the vegetables in a single layer on the baking tray and roast for about 25-30 minutes in the oven, until the vegetables turn a light golden brown on the outside and yield when pierced with the tip of a knife. Remove from oven and allow to cool.

Add the roasted veggies into a food processor & blend. Drizzle about 2 cups of water / stock while the mix is being pureed. the final consistency should be similar to that of crushed tomatoes  from a can.

Sieve the puree to extract the soup part of this recipe. Reserve the part that remains in the strainer (should yield about 1 cup). (that's the main ingredient in the 'GO' part of this "MOGO' recipe)

Heat the remaining oil in a saucepan. when the oil is warm, (NOT hot, you do not want to burn up the spice) Add the Harissa powder & allow the flavors to bloom in the oil.

Add the strained soup to the saucepan & simmer on a low-medium heat. Add the last cup of water/stock as per your preference of thickness.  Taste and adjust for seasonings. Serve warm with a dollop of Creme Fraiche ( sour cream/Greek yogurt) and a chunk of warm crusty french bread. As for the solid part of the soup, the stuff that remains in the strainer, it still has a LOT of great roasted flavor and it would be a travesty to toss this in the garbage. There is no specific spicing that would restrict its usage and hence, one could technically endow a flavors from a completely different cuisine. I used up this batch to make some delicious burger patties that would be perfect between a sliced, toasted kaiser roll along with slices of tomatoes, cucumber and lettuce with a slather of spiced Mayo.

1 cup of the pureed root vegetables left over from straining the soup
1 cup Panko bread crumbs
3/4 - 1 cup fat free refried beans.
1/2- 1 teaspoon Ancho chile powder (for that characteristic smokiness)
2 tablespoons finely chopped Cilantro (which I did not add in the photographed version)
Oil for pan-frying 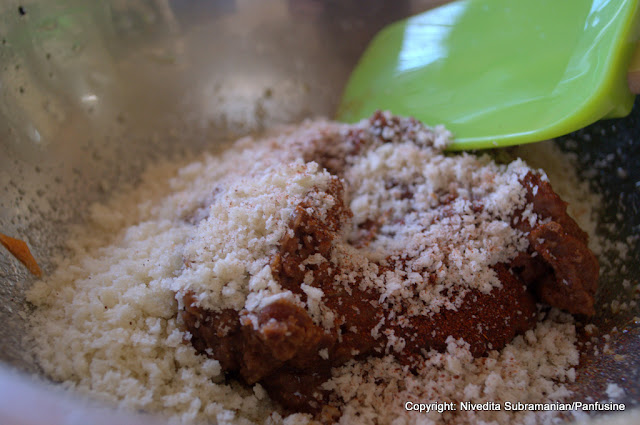 Add the strained veggies and the cilantro to the mix and fold to combine evenly. Taste and adjust for salt (the refried beans already has a lot of salt, so you may want to adjust for it). 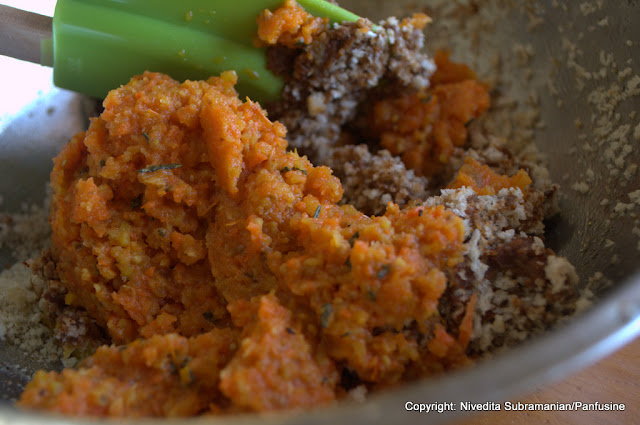 Divide the mixture into six equal parts. Shape each one into a flattened patty.

Heat a non stick skillet and add about 2 teaspoons of oil. When it heats up & begins shimmering, swirl to coat the pan evenly. Gently place two patties and pan fry on medium heat for about 3 minutes. Resist any temptation to flip the patty over more than is necessary. you want the proteins from the beans to coagulate and form a nice crisp skin before you turn it over. Brush the top side liberally with oil before flipping over and cooking the other side (~2-3 minutes). Remove and place on a plate lined with paper towels. 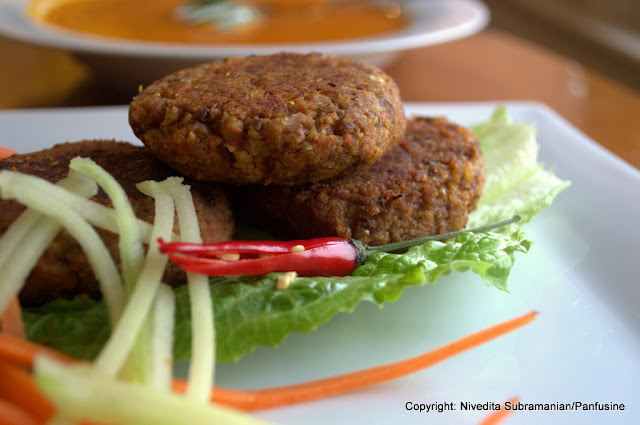 Serve between a toasted Kaiser roll with sliced tomatoes, cucumber & lettuce with your choice of condiments. Alternatively you may simply serve this alongside some spicy Sriracha flavored mayo as a dip. 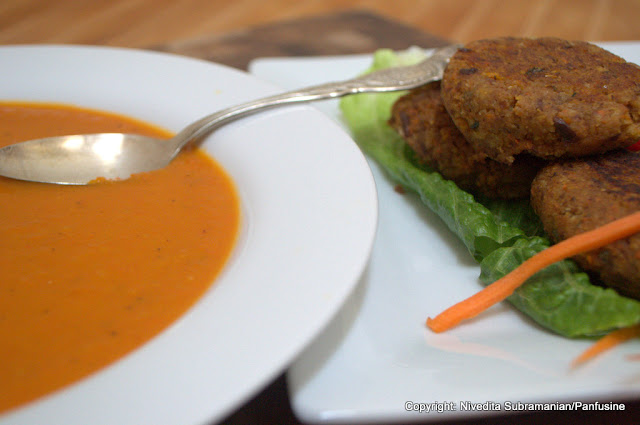 Coming up next week: A quantitative recipe with digital measurements & my very first giveaway from OXO.