Pasta can become boring very quickly. Sometimes, all it takes is a few simple techniques to bring it into a whole new light. Panfusine does just that by toasting "stellini" pasta first to add a nutty flavor, then boiling second. She transforms cauliflower into "couscous" in a snap by grating it into tiny little beads, creating a novel texture -- a technique we can see using in a myriad of ways. The result is a pitch perfect combination of spicy and texture: upon each bite, the peas and mustard seeds pop in your mouth while the onions (caramelized and slightly sweet), are enveloped with a heat from the fresh chili, ginger, and unique asafetida flavoring. Make sure to finish each plate with the fresh lime juice before serving, as this adds brightness and acidity that cuts through the heartiness of the cauliflower. If you're not keen on heat, you may want to reduce or eliminate the fresh chili -- it packs a punch! - Helen Hollyman

I decided to take a leaf out of 'D's (the culinary force behind  Chefinyou) book,  and attempted to clean out my pantry. Easier said than done. For one thing at any given time I tend to have about 8 different types of pasta tucked away in various corners of my Pantry & cupboards... And I'm not even Italian! Lets see, there's a box of filini, stellini, radiatore, capellini... AAARGH, it was simply faster to arrange then in a family portrait!


or so I thought...OMG.. I'm a Pasta Hoarder!
Well... Its always either I look at a shape & go 'AAAWW' its soo cute.. or my 5 yr old's on-the-spot dinner demand. Mommy I want this Pasta... & only this one, & so into the shopping cart it goes...so in any case, to get over the guilt of potentially depriving another family of their rightful share of pasta, I HAD to use some of it!
The catch, The other half preferred a light brunch, maybe just an upma,  I had a nice cauliflower I had my mind set on dispatching., the compromise -- Cauliflower Upma, (which meant that there would eventually be a mound of little florets decorating the dining table courtesy the 5 yr old).. In the end, I had an upma that my son could not pick & discard cauliflowers out of & also used up one batch of pasta.
I picked up the idea to make this from a chance channel flicking through Food Network. The program was Giada at home and the recipe was for a salad using fregola, a type of pasta from Sardinia (& no I shall restrain myself from running out for a bag of that!).. If I'm not mistaken, she had toasted the fregola prior to boiling it.


Disclaimer: As I really wasn't planning on making it specifically for posting, you'll have to excuse the lack of & quality of photographs. To get a clearer idea of the pasta shape I used for the Upma, I'll refer you to this photograph from the blog  theparsleythief.com. which has been quoted by Saveur Magazine as one of their 50 must read blogs and yes some awesome mouth watering recipes!


Stellini (star shaped) pasta falls under the category of pasta's used for soups and kid friendly dishes. These are the miniature versions of regular pasta although, I'm not sure if there is a larger star shape pasta, but if you're interested in looking up the the entire range, here are some pointers;

Toast the pasta on a skillet on low heat till it begins turning golden. Keep stirring the pasta while it changes color since they can get burnt quite quickly. Remove from fire.

In a large container, boil sufficient quantity of water (with salt added). add the pasta & cook (toasting tends to lengthen cooking time, it takes about 2-3 minutes more than the time listed on the packaging for regular  water &  Once cooked, rinse off the starchy water  drain and set aside. Add a tsp of oil to keep the shapes from sticking.

Using the fine side of a box grater, grate the cauliflower florets. This shreds the florets down to the size of couscous ( a fine middle eastern pasta in the shape of tiny beads).

Add 2 tbsp of oil and the red chili powder to the cauliflower, spread on a lined baking sheet & roast at 400 C till golden. (~ 10 min), remove, transfer into a bowl & season with salt.

In a skillet, Add the remaining oil, heat till near smoking, add mustard.

When the peas are soft, add the pasta & Cauliflower and toss  till all the elements are well combined.
Transfer to a serving dish. Drizzle with lime juice prior to serving. 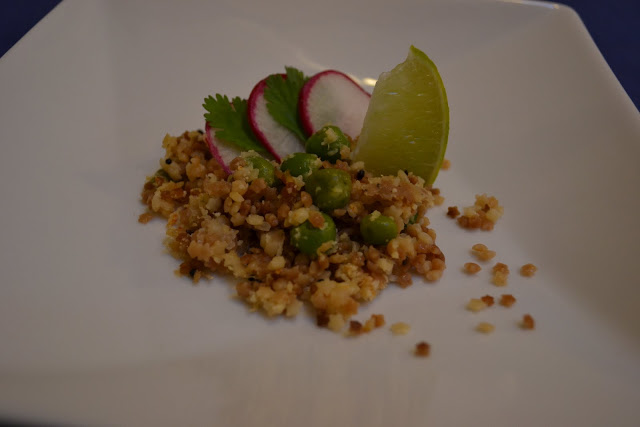 Cast of characters in the photo collage:

& I've not even mentioned my stash of rice noodles from the chinese & Indian stores!
That's a post for another day!
Bon Appetit!