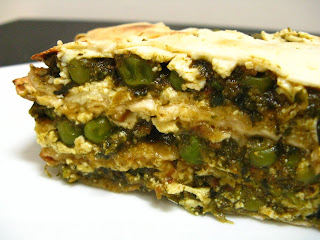 Growing up in a traditional Tambram household invariably means that one is subject to an array of stringent rules regarding food. 'ecchhil' (Jhoota or portion of plated food that has already been tasted by someone else), 'Patthu' (a complicated set of rules dictating the washing of hands after touching a particular cooked dish), 'theendal' (roughly translated as 'polluted', especially by women going through their monthly cycles). Beyond these basic set of 'kosher' rules, are others that are not so well known.. Like.. 'Did you know that it was taboo for an observant brahmin to eat anything that contained yogurt & urad dal' in the same dish.  In other words ( assuming the tone of the 'soup nazi' from Seinfeld): No Dahi vada/ Thayir vadai for you... EVER!!. The reason apparently is that Urad dal (& this is partially my extrapolation)  is said to have protein ( as in all the amino acids) that are similar to muscle tissue, and its taboo to drown an animal in its mothers milk.
This rule about consuming milk & meat ( or rather abstain from) is one of the cardinal 'kosher' food rules in the Jewish faith. There a a number of similarities to be found with traditional Indian orthodoxy in the socio-cultural rules that people following this faith. There are even similarities to 2 of the 3 boldly highlighted rules that I listed above. Certain Orthodox Jewish communities bar women from the temple, touching money, or handling food while having their periods and some traditional homes even have 2 distinct kitchen areas for the preparation of Kosher & non kosher foods.
One of the most religiously significant festivals in Judaism is Passover. This week long festival commemorates the exodus of Jews from Egypt when they were  freed from slavery by the Pharaoh. Since this exodus was done in haste, there would have been no time to bake anything with leavened dough, hence any food prepared with leavening agents is forbidden. During this time, Supermarkets are stocked with boxes of cracker like unleavened bread known as 'Matzoh'

The taste of these lightly salted crackers bears an uncanny resemblance to fresh 'phulka' roti, except that these are completely dry. & why not? the basic ingredients are the same: flour, water & salt & no leavening agent.
The phulka is cooked over a griddle while the matzoh is baked. Those of us who count roti as a daily staple, revel in the umpteen varieties of subzees & gravies that it complements. Give me 2 phulka rotis & a bowl of mutter paneer or saag paneer & that would be a meal to feel good about for the rest of the day!
As much as pasta dish such as lasagna is also made out of the same raw ingredients, what it CANNOT do in terms of familiar mouth feel is replicate the comfort of the humble roti & subzee. My crazy solution ( & I've been regularly making this for dinners which means that the photographs are really not worth posting, shot as they are under low lights) use Matzoh crackers in place of the lasagna strips & then feel free to use almost any Indian gravy dish that you eat with roti!. Since i could not decide between palak paneer & Saag paneer, I combined all three together. so here it is, my passover special, Matzoh lasagna with spinach, green peas & Ricotta filling. 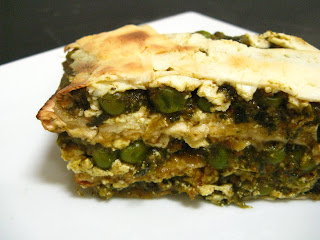 Combine all these ingredients & blend into a thick, smooth paste, adding as little water as needed.

Heat the oil & ghee in a skillet & add the masala paste, stir well & cook till the oil oozes out & the raw smell of the onion has disappeared. Add the crushed tomatoes, turmeric & salt. Cover & cook on medium heat till the tomato has incorporated into the masala to form a brown colored gravy. Stir in the garam masala & the sugar.
Add the spinach puree & peas, cover & allow to simmer for about 15 to 20 minutes till the dish is well thickened.

Line a loaf tin with aluminum foil & brush well with ghee. dip the matzoh cracker square in the water till it softens slightly, tear into the size required for you baking dish. Place this at the bottom of the loaf pan. 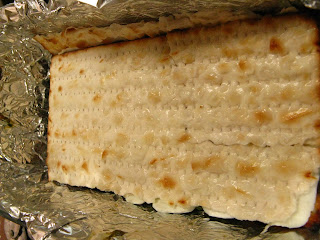 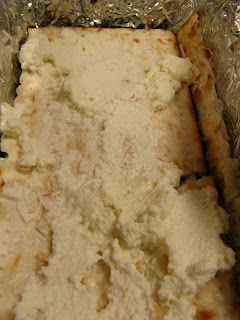 The next layer to be added is the spinach filling. Spoon the required amount & spread evenly. 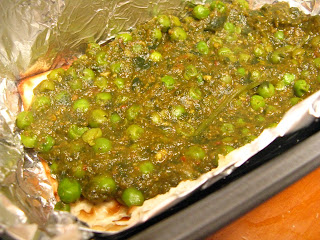 Using a vegetable peeler, slice thin strips of paneer from the side of the block ( this ensures that the paneer does not dominate the dish). Arrange the strips over the green layer. 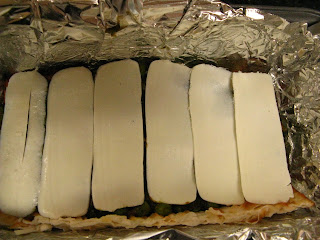 Add another matzoh cracker & repeat the layering till the pan is filled up. Finish with a layer of paneer.
Liberally brush the top Paneer layer with melted ghee.
Place the baking dish into an oven (preheated to 350 F) & bake till the Paneer on the top layer is golden brown.
Remove from the oven, allow to rest for 5-10 minutes, Cut & serve as a complete meal with a salad of your choice.
Bon appetit!