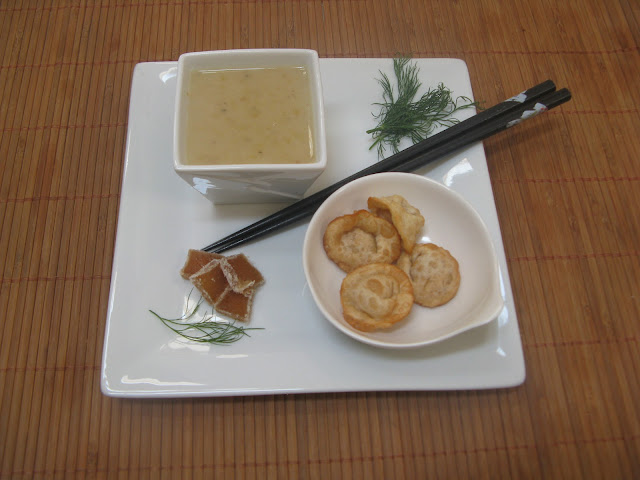 The term 'Kerala' to most South Indians, brings to mind a verdant pristine land lush with Coconut, Cashew, Banana & Jackfruit trees, an image of prosperity combined with a certain sense of inner calm. To the rest of the world, it is the land of spices, that indispensable cornucopia of Natures bounty that makes food palatable.
Traditional Kerala Cuisine makes use of jaggery / 'gud'( unrefined sugar before the molasses have been removed) which has a certain 'winey' depth of flavor. This adds an extra dimension to the taste profile of any dish its added to. Other staple ingredients are Coconut, Plantains, Mangoes & Jackfruit.
Today's dessert presentation is dedicated to all those of you with roots in Kerala. It consists of fried tortellinis stuffed with 'Chakka Varatti' (A jam like sweet primarily made with jackfruit & jaggery) to be served with a 'Vella payasam' made with toasted mung & coconut milk, sweetened with jaggery.
A piece of candied ginger rounds off the presentation by adding a touch of piquant spiciness.
(& the dill is just eye-candy)
Ambrosia from Gods own land!

Chakka Varatti
You need:
1 can Jackfruit,drained
1 cup Jaggery, loosely packed
5-6 pods cardamom, powdered,
1 Tsp powdered Ginger,
1 Tbsp Grated coconut (optional)
2 tbsp Ghee
In a food processor, mince the Jackfruit pieces as per taste.
Microwave the Jaggery with 2-3 tbsp water for 2 minutes, till the lumps have dissolved completely. Strain to remove any residual grit and set aside.
Heat the ghee in a heavy bottomed skillet and add the Jackfruit and Jaggery syrup. Mix well and let cook on a low flame till the fruit is soft and all the water has evaporated.
Add the grated coconut, Powdered ginger and cardamom. Stir well, remove from flame and cool.
Store in the refrigerator in an airtight jar. 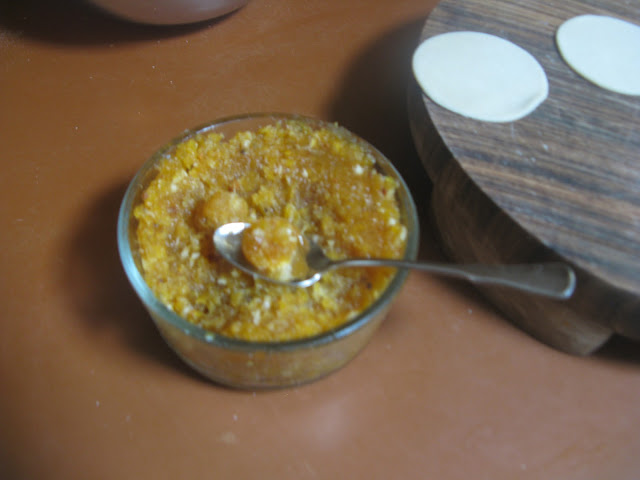 Vella payasam
½ cup Jaggery loosely packed.
2 tbsp yellow mung dal, toasted golden
½ cup coconut milk
1 cup whole milk
½ tsp Cardamom powder
1-2 tbsp water
1 tbsp ghee
Raisins & Cashew pieces to taste.
Pressure cook the toasted mung dal till soft
Add water to the Jaggery and microwave for 2 minutes till the lumps have dissolved. Strain and set aside
In a Saucepan, combine the cooked dal and the Jaggery syrup and heat till well combined
Add the Cardamom, milk and coconut milk. Heat on a low flame till it begins to boil. Reduce the flame to a simmer for another 5 minutes.
In a separate saucepan, heat ghee and toast the Cashews & Raisins till golden.
Stir in the Cashews and raisins to the Payasam . Serve chilled. 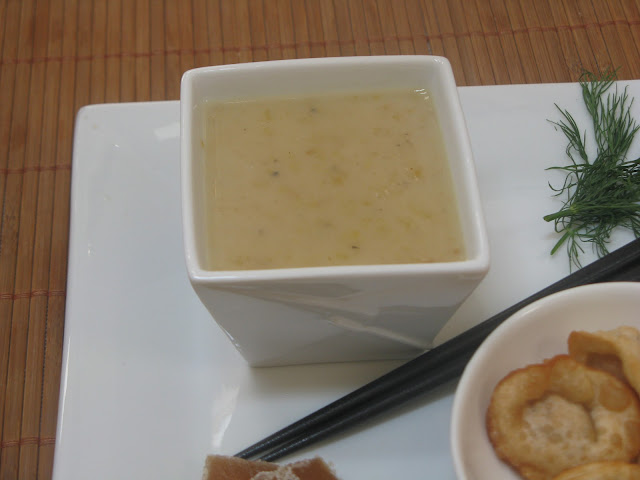 Chakka Tortellini.
For the Dough,
1 cup all purpose flour, + additional flour for dusting
¼ cup water
1-2 tsps Sugar.
Chakka varatti, cooled.
Large Pan of boiling water, or Oil for frying.
Using a spoon and oiled palms, apportion marble sized pieces of the Varatti. Set aside
Dissolve the Sugar in the Water. Knead the flour stiff dough using the Sugar water.
Divide dough into 6 balls, Dust the rolling surface with flour and roll into a thin sheet. Using a biscuit cutter, cut out 2” circles. 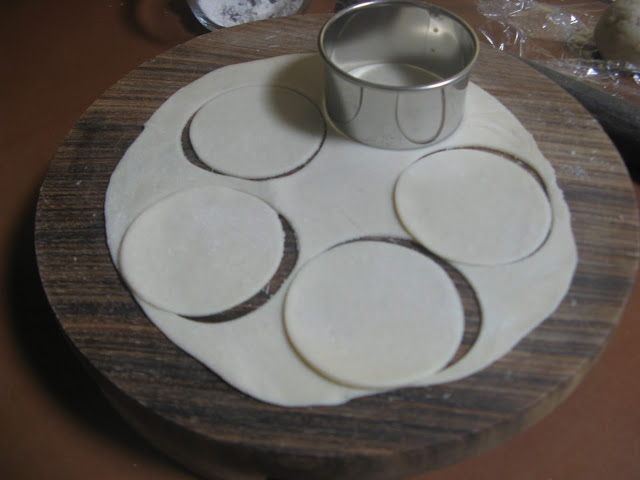 Place a ball of the varatti on each circle, 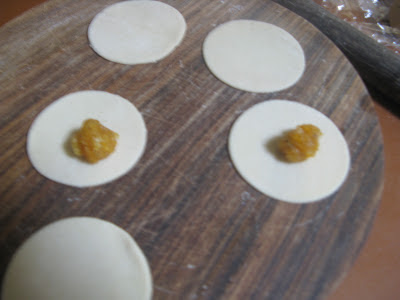 fold over as shown (make sure you squeeze out any air) 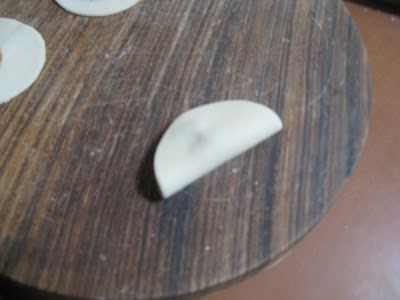 to make the tortellini. 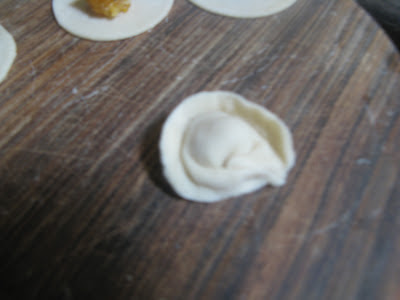 If you choose to boil the tortellini, heat water to boiling point, gently place the tortellini in the water and cook till they float up. Remove & Set aside
If deep frying, heat oil & fry till golden brown. The sugar in the dough helps caramelize the pasta. 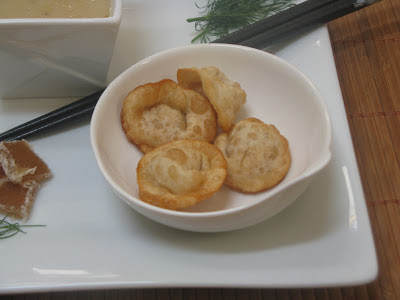 To Serve
Place 4-6 tortellini in a serving dish alongside a small bowl of chilled vella payasam. And serve with a pair of chopsticks for dipping. 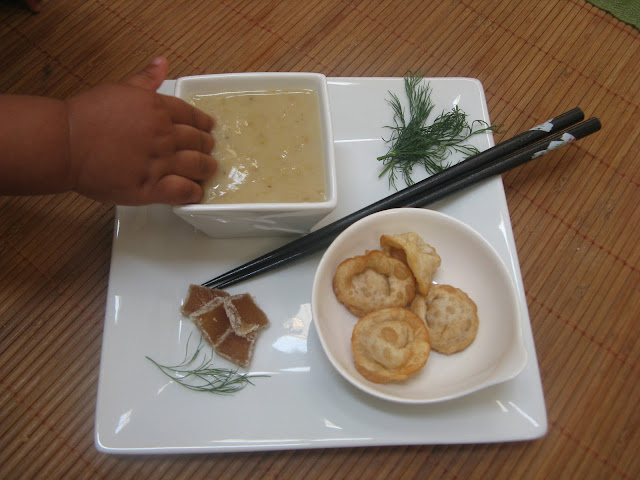 Alternatively, place the tortellini in a shallow bowl and pour Payasam over (This works especially for the deep fried version).