I've been going over this point ( almost ad nauseum) about how South Indian cuisine lags so far behing when it comes to plating & have also given some possible reasons as to why this is so. Without belaboring on this much further, let me get to the point. A before and after makeover for that much loved comfort food that most Tam Brahms go crazy for... Idli & Chutney. Mind you, the end result as far as the taste is concerned is identical and would pass muster with the most orthodox in-house senior resident.
Recipes for Idli and chutneys are available for download by the dozen but here is the basic list of ingredients:
3 measures parboiled rice (or Idli Rice)
1 measure whole Urad dal (both available in ethnic Indian grocery stores)
Wash & soak the rice & lentils separately for about 5-6 hrs. Grind the rice till the consistency resembles that of pourable concrete!. Do the same for the lentil except that the lentil batter ideally should be that of thick whipped eggs. ( the Urad Dal has a mucilaginous texture when made into batter, which helps the idli hold up its shape and spongy texture).
Add salt to taste and half a tsp of baking yeast to kick start the fermentation, especially if you do not live in the tropics. Mix thoroughly & let it rest overnight in the oven ( with the light on). Grease the idli molds with sesame oil, pour a ladle of batter into each mold & steam for 10 mins. Allow to cool slightly before extracting from the molds

Idli in its most traditional form, is steamed in concave molds giving rise to the ubiquitous lentiform idli that we are familiar with. Traditionally, it would be served as with 2 bowls, one  containing coconut chutney, the other with sambhar and. at times, a little pile of  'milaga podi' with sesame oil spreading out on the plate, meant to be mixed . (but not before its coated part of the idlies, and the bottom of the stainless steel katories with the chutney & sambhar)!


This is the time honored method of making Idlis..


Now, I believe in the  idiom "Necessity is the mother of Invention" or to put it slightly different a la the one & only Calvin, "Mothers are the necessity for Invention". Either way you look at it, there is nothing that delights a child more than a cutesy variation of a comfort food. and miniature idlis, I discovered, will only take you so far.
Most kids adore cupcakes in any form & guess what? Idlis are no exception, So I started making idlis for my kid in silicone cupcake molds. This process it turns out is great, since its very easy to remove the idlis without distorting them and also made for an elegant presentation when guests come home.
So here is my process for plating: Add a dollop of green chutney to the center of the plate & swirl around. Place 2 idlis inverted on the chutney, drizzle with sesame oil & sprinkle with desired amount of podi! 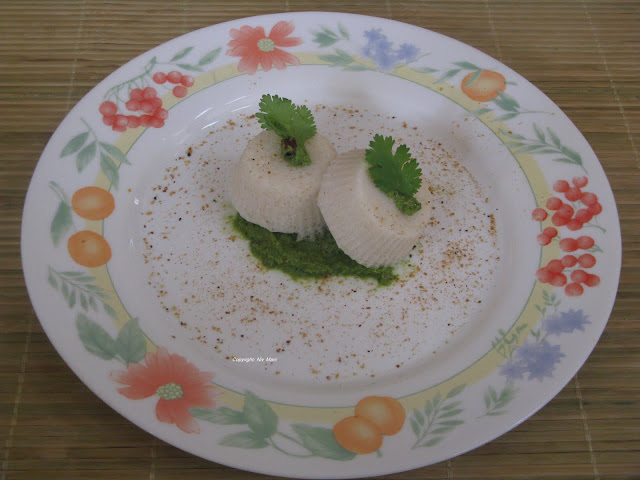